I can’t think of a single weapon that is as hard to capture on the page as the AK-47.  C.J. Chivers, author of The Gun (an epic analysis of the AK’s proliferation), makes a clear argument that the Kalashnikov, in all of its variations, is the 20th century’s defining weapon of mass destruction.  But still, after 500 pages of in depth analysis, he doesn’t even attempt to capture how the AK feels from a user’s perspective.

I don’t know that I’m up to the task either.  But I’ll leave the history and mythology to Chivers, who does it better than I could ever hope to do.  Really.  Every gun nut should read this book.

The Izhmash made, Arsenal imported SGL21-61 from K-Var

To begin.  This is a new production AK-47 in 7.62x39mm.  It is not a surplus gun.  It has not seen battle.  It has never had wooden furniture.  It was made for export to the United States.  And, when it was exported, it looked very different.

On the other side of the planet, in Izhevsk, where Kalashnikovs have been built for more than 60 years, there’s Izhmash–a factory devoted to the production of Russian martial arms.  Or it was.  As the Soviet Union began to fall apart, and Warsaw pact countries drifted farther from Soviet influence, demand for the military products of Izmash fell away.

Rather than mothball the factory, the Russians changed the design of the AK-47 and other guns and made them “sporting” rifles.  You know–in case you want to hunt with an AK style rifle.  The changes are significant.  The magazine well is narrower.  The Grip and stock are replaced by a more traditional rifle stock, and the trigger group is moved back an inch or so.  The guns are produced as semiautomatics.

Once the gun reaches the states, Arsenal (a Las Vegas based company that specializes in such imports) dismantles the “sporterized” version and makes all of the necessary modifications that will allow the new version of the gun to both look like an AK-47 and be 922r compliant.

This is the epitome of ludicrous.  But it is the law.  This particular AK-47 then went on the K-Var who handles a lot of the American AK market.

But let’s talk about the gun.  AK-47s are not known for minute-of-angle accuracy.  Not all of them.  Shooting with iron sights at a distance of 75 yards, I can keep an entire magazine’s worth of bulk ammo on an eight inch target.  Tula ammo, no less.  Jacob, who so ably assists me on many of these reviews, can do better than that.  At 75 yards, with iron sights, Jacob shoots groups just over two inches. 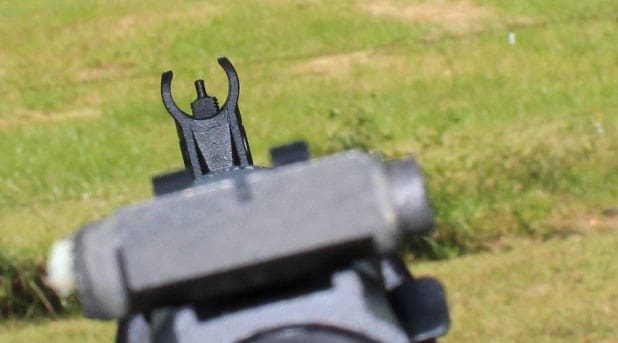 The gun itself has some features that are common to AKs and some that are not.  The muzzle break, for one, is a bit more practical than the typical slant cut barrel found on most Kalashnikovs.  And the furniture is black plastic.  You have to supply the magazines, but most work well. 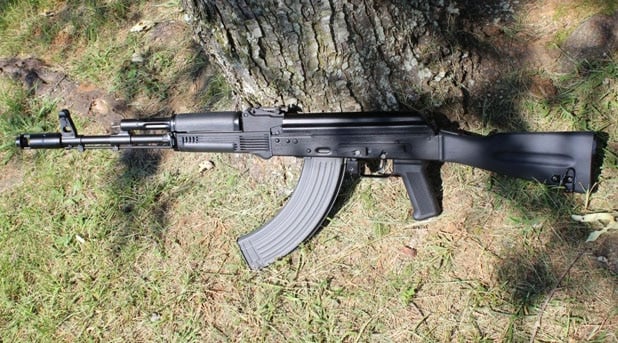 I’m not a big fan of the short, NATO length stock.  I’m large.  The AK feels great in my hands, but when I bring it to my shoulder, I have to put my face uncomfortably close to the receiver.  The gun has a mild kick, and it tends to push back instead of up.  I need a good three inches, maybe four, added to the stock.  But there are some after market options.  Fit can be an issue, though, as not all Kalashnikovs measure out exactly the same.

But it shoots so well, I can hardly complain.  I’ll find the right stock for it.  It won’t be as easy as modifying an AR-15.  And this, I think, is part of why the AK-47 is not as popular here in the states.

Even a new weapon like this has limitations.  One huge issue with all Kalashnikovs is the safety.  It is noisy, and requires a shooter to let go of the grip to engage or disengage.  And the stock triggers in these guns are not the best.  But really, even a new gun like the SGL21-61 is still an AK, and the AK is, and always has been, a bit rough around the edges. 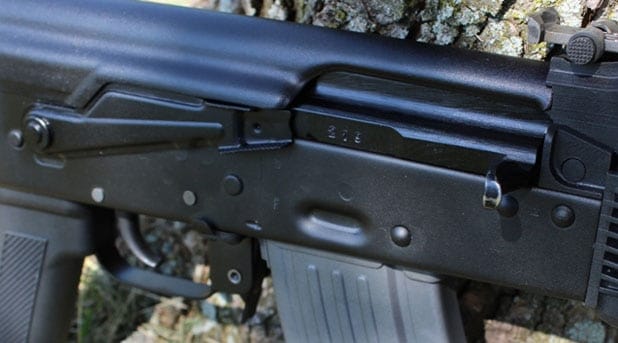 Another obvious weakness of the SGL21-61 has to do with optics.  The gun has a traditional side mount for a scope, but nothing like what is available on other guns.  In order to add much to an AK, you need to begin replacing parts.  A new forend, maybe.  A new bolt cover.

And there are some people who will want to swap out parts.  Be sure that replacement parts are made in the US, or risk being out of compliance.  I want a new grip, but that’s all.  I don’t mind the iron sights.  They are accurate enough.  Fast enough.  And certainly reliable.

This is, as Chivers points out in The Gun, an assault rifle.  It is the most prolific assault rifle in the world.  The AK-47 was one of the first successful martial rifles to abandon the heavy rifle rounds that armies relied on for most of the 20th century.

I personally believe that everyone (at least all those of a certain age) need to understand how guns work.  And more of us should understand this weapon, too.  Even if you’d never consider owning one, much less using a Kalashnikov, it just might pay to know how to shoot with it.  Just in case.

If, like me, you’ve always wanted an AK-47, now’s the time.  They may not last forever.  Not the gun.  A good AK, by all accounts, will outlast all of us.  But the opportunity.  Izhmash is feeling the economic crunch.  There are rumors floating around that suggest the factory may well shut down.  Soon.  When it does, these AKs will become much more valuable than they are now.