I admit to being a person of changing tastes. As a teen, I was interested in traditional muzzleloaders and hunting rifles followed by percussion revolvers, double action revolvers, and semi-automatic pistols. These days I am working my way through my new interest, the AR-15, a style of rifle that really should be impossible to ignore.

Made in huge numbers by manufacturers and in homes from parts kits, the AR-15 is America’s rifle — I can’t imagine you can find a gun store in this country without a few of these rifles on the racks. The platform is quite customizable and a good number for fun, hunting, and defense. An almost perfect all-around rifle? I know that many agree.

Though it took me a while to ease onto the AR wagon, I recently decided to put one through its paces. The gun I reached for is the Entry Level Rifle made by KAB Arms, a manufacturer that is local to me in Houston but with a nationwide grasp.

The goal of the KAB Entry Level Rifle is to be a budget level AR15: everything you need and nothing you don’t with a retail price in the $500-600 range. 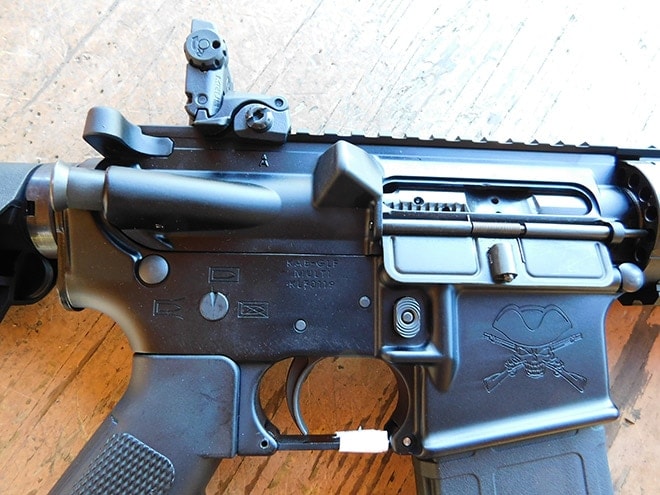 The KAB Entry Level still comes with a milled aluminum receiver, a forward assist, and a dustcover while some other offerings ditch these features to keep the overall price point low. (Photo: Terril Herbert)

The heart of the rifle is the action, which is a basic carbine length direct gas impingement design that blows hot gas pressure from the barrel directly back into the action to cycle the bolt. The gas tube and barrel are of 416R stainless steel construction to not be so susceptible to corrosion and rust. The gun’s bolt and bolt carrier are black nitride, again for rust resistance.

In terms of furniture, the rifle comes with no sights from the factory but the upper receiver has a Picatinny rail as does the free-floating aluminum quad rail that doubles as a forend. In theory, this arrangement allows for not only sights but any other conceivable accessory one would want to mount on the rifle. The Entry Level comes with a six-position buttstock along ambidextrous quick-detachable fittings. You still have a dust-cover and forward assist feature and a real 7075 aluminum lower. The most prominent thing about the rifle, though, is the barrel. 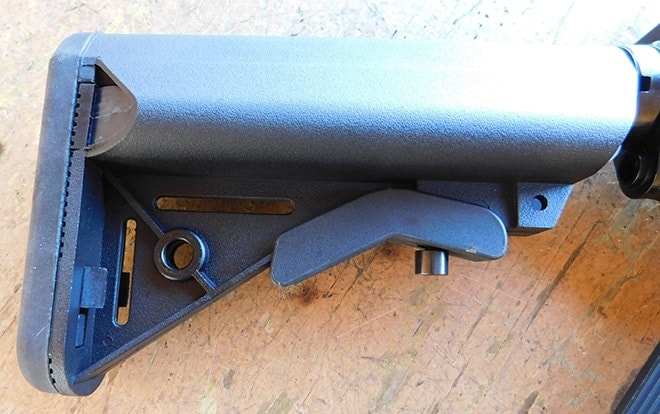 The buttstock of the SOPMOD stock set is adjustable, though I mostly shot the rifle in its most closed position. The flared cheek rests on either side provide a natural place for the eye to line on the sights. (Photo: Terril Herbert)

As mentioned the barrel is 416 stainless steel and is a handy sixteen inches in length that has the standard M4 profile. It has a versatile 1:8 twist and is chambered in 5.56mm NATO, feeding from an included Magpul 30 round magazine. A prominent stainless muzzle brake rides at the end.

I chose a variety of ammunition to shoot, in what became an accuracy test first and a reliability test second. 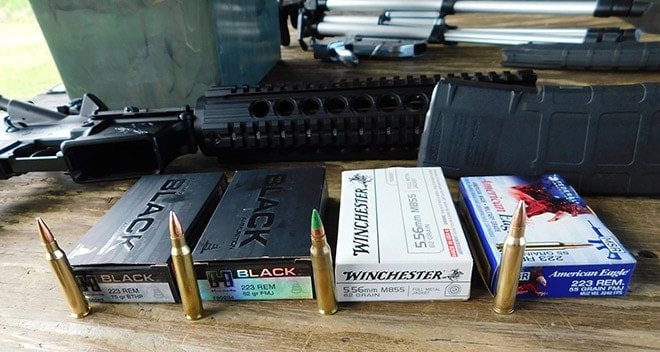 The ammunition most used in the test. While all these performed well in accuracy and function, the Hornady Black line delivered the tightest groups. However, this may be offset by the additional expense of that ammunition. (Photo: Terril Herbert)

Charging the rifle is straightforward. Insert the magazine into the well and retract the charging handle. Let it go to chamber the round. When loaded to the maximum 30 round capacity, the MagPul mags tend to be a little hard to seat on a closed bolt and require a good smack to seat. However, that is a normal quirk.

I moved out to fifty yards and flipped up the Magpul MBUS “iron” sights that I mounted to the rifle. I chose these relatively basic sights on the theme of starting out with a no frills rifle along with no frills sights. I also started out with no frills ammo, the Tul Ammo.

This first test with two hundred rounds of the steel cased ammunition was the only one with a bother. Accuracy was pie-plate at fifty yards and the gun functioned almost 100 percent except for two instances: during the first magazine through the rifle I experienced one failure to chamber a round and two double-feed malfunctions in which a round was not extracted and the bolt tried to chamber another round over it. After that first magazine through the gun, however, there were no problems.

Though not a “pencil” barrel, the M4 contour barrel still managed to heat nicely even with my relatively slow pace of shooting. (Photo: Terril Herbert)

Recoil was very low, owing to the sedate ballistics of the 223 and 5.56mm cartridges used. But I did find the quad rail, with its abrupt rails to be annoying to hold onto over a smoother polymer handguard. The controls are right where they need to be on an AR-15. The magazine release, safety, and bolt release were handy, even for a left-handed person like me.

Eventually I calmed down and moved onto the brass cased ammunition. I was disappointed that the M855 and the Federal ammunition could not be grouped any better than six-inches at fifty yards. But one try wasn’t going to do it.

I sat rested at 100 yards in another session and tried again. The M855 and Federal ammunition managed about four inches at that distance by using a six o’clock hold, holding the front post sight just below the target. Lastly, I tried out the Hornady ammunition which gave me the best groups at fifty, but I again used a six o’clock hold. The 62 grain FMJ offering grouped 1.4 inches at 100 yards with the longer range oriented 75 grainers coming in at 1.6 inches. 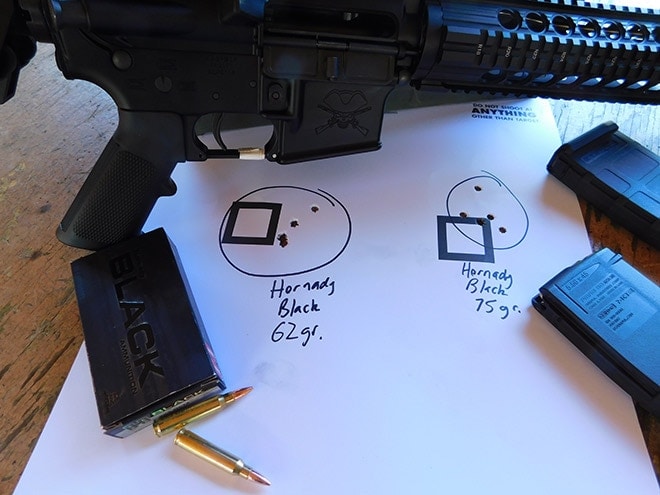 Going out to 300 yards with the KAB really requires a good optic for precise work. At that distance, the MBUS sights do hit dead on, but a three-foot-wide target is essentially covered by the front sight. Despite this, it was not difficult to put most of a twenty-shot string into such a target.

I came away quite impressed with the KAB Entry Level Rifle, even with the self-imposed handicap of using only iron sights. If you resist the urge to blast away, the rifle is very accurate and doesn’t heat up as quickly as some “pencil barrel” rifles might. Though I am not a big fan of the quad rail from a comfort stand-point, it does give you more options for mounting lights and other attachments. And it is in the standard 5.56 NATO round, which is light in recoil, easy to find, and affordable to buy.

Many budget AR 15s give up good features like a forward assist, dust covers, and use polymer lower receivers. The KAB doesn’t take these shortcuts and is still priced competitively. In summary, if you are looking for a versatile AR-15 that doesn’t skimp on the features while still being affordable, the KAB Entry Level Rifle is a solid contender.