Kel-Tec has contributed another player to their lineup of lightweight, compact rifles with a .22 WMR model called the CMR-30.  There’s a lot to love about this little gun, and only one minor drawback we could find during our range tests.

The barrel is 16.1 inches with a 1 in 16-inch twist. With stock fully extended, the overall length is 30.6 inches.  Thanks to mostly aluminum construction, it’s very light at 3.8 pounds unloaded. And there’s more— 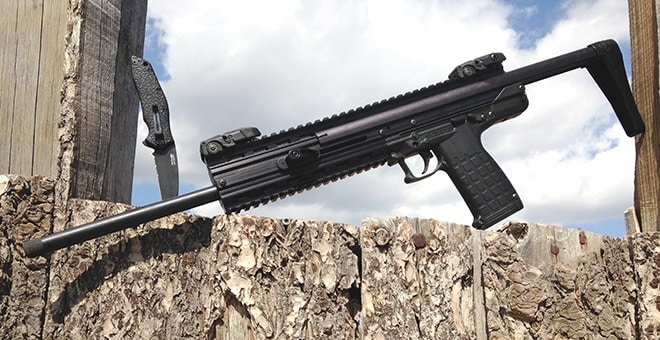 Folks who love gadgets—and folks who love things that work–will find this rifle well-adorned out of the box.  Examining the CMR-30 from back to front, we find:

An adjustable stock. Kel-Tec calls it a four-position stock, but that doesn’t include the fully collapsed position, which shortens the gun to a very portable 22.7 inches. The ambidextrous adjustment lever is located just under the top front of the trigger guard.  Operation is smooth and silent.

Metal sling loops on either side of the buttstock. Admittedly, they’re small but that’s a trait that can be compensated for by using a loop of paracord to accommodate larger sling hardware. 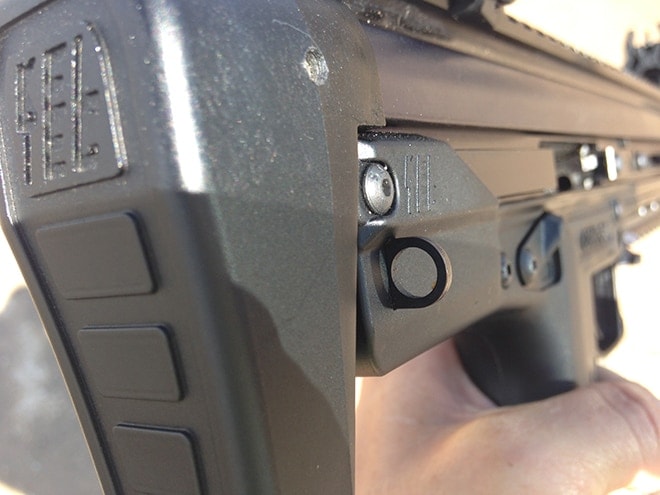 Sling mounts are on the left and right. (Photo: Team HB)

An ambi safety. Two of our three testers are southpaws and all found the thumb-operated lever convenient.

There’s also a textured pistol grip that contributes to this gun’s pack-ability with its narrow, flat profile.  The signature Kel-Tec texture makes keeping a solid grip and shoulder mount easy.

The magazine release, like most other things on this rifle, is ambi-friendly.  Its location at the front and bottom of the magazine well takes a little getting used to however. 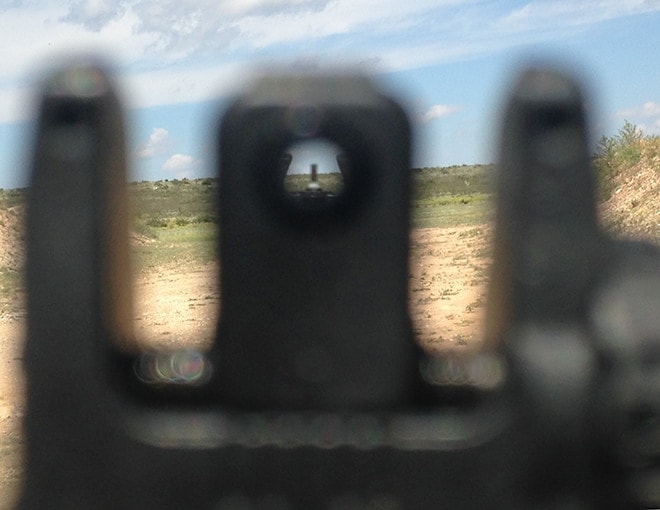 A flip-up Magpul rear sight, with aperture, adjustable for windage.  This (along with its mate up front) is a surprisingly high-end attachment.  Regardless of the reason for putting better sights on the CMR-30 than on than the Sub-gun series, they did right by the consumer with this choice.

More Pictatinny rail than you’ll ever need (unless you’re a diagnosable gadget addict) runs the length of the stock, top and bottom.  Accessorize away! 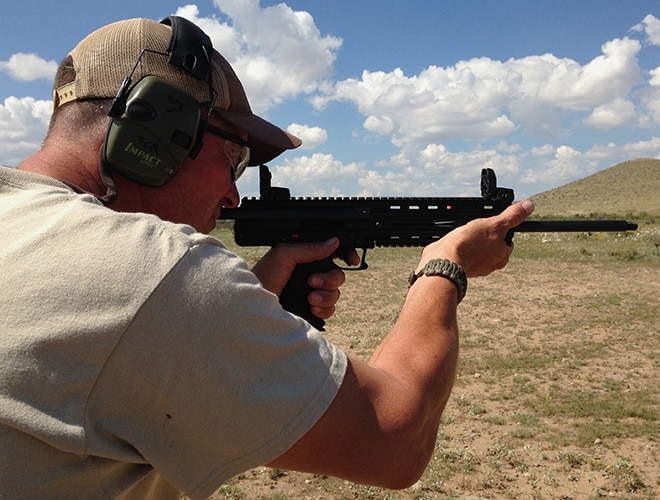 Ambidextrous bolt operation, with a charging handle big enough to grab onto and operate quickly to clear a malfunction while keeping the gun shouldered. It’s also there to simply lock the bolt back, though doing that without breaking the firing position would take more work than I’ve put into this gun so far. The lock-back lever isn’t ambi; it’s on the left side only. At first glance it appears the charging handles may reciprocate during firing, endangering fingers.  They don’t—they’re only for manually pulling the bolt rearward.

To match the rear sight, the front is a flip-up, Magpul adjustable post.  This setup is great for keeping the gun compact as optics can clear the sights without being mounted extra-high.  The sights can thus co-witness with many optic setups. 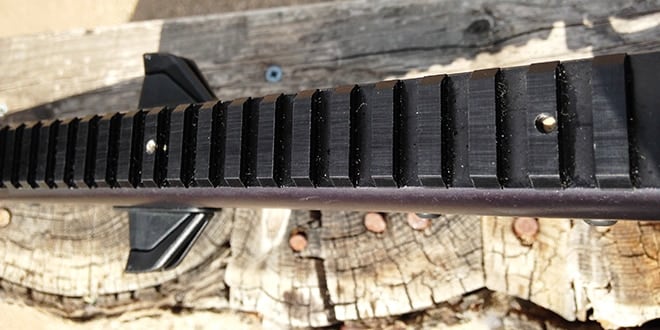 A threaded muzzle, with a good checkered steel cap, allows for quick installation of a suppressor or flash hider. The cap keeps the threads clean and the barrel streamlined without an accessory.

Finally, Kel-Tec provides a full-color, highly detailed owner’s manual. It’s a nice gesture in an age when most manufacturers are issuing dull, generic manuals that drive us to YouTube when it’s time to clean the firearm.

Trigger operation is, as I’ve said in other reviews of battle/varmint rifles, good for these purposes.  That is to say it has a bit of takeup, the pull isn’t heavy or grainy, and the reset is palpable without being match-grade sensitive.  Kel-Tec says the weight range is three to five pounds and it’s not adjustable. There’s always someone to kvetch about a field-use gun not having a match trigger. Suit yourself; we like this one just as it is. 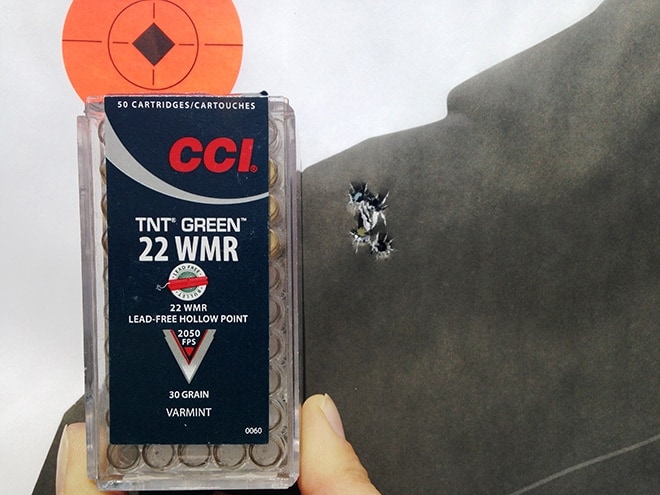 Testing was done with a variety of setups from prone, kneeling and standing positions, with and without a bipod, with and without a Gemtech Outback 2 model suppressor; with the stock sights and with a red dot optic.  While we weren’t highly scientific about measuring accuracy, here is the best representation of accuracy:

Ammo types during the trial include CCI TNT Green (lead-free) 30 grain, CCI Maxi-Mag 40 grain, and Hornady Critical Defense 45 grain. All achieved one to one-and-a-half-inch groups at 25 yards, with the TNT Green forming the tightest group of less than an inch. This is not to pass negative judgement on the other loads, as improvised rests used in the prone position, wind and shooter error surely had some effect, as they usually do. 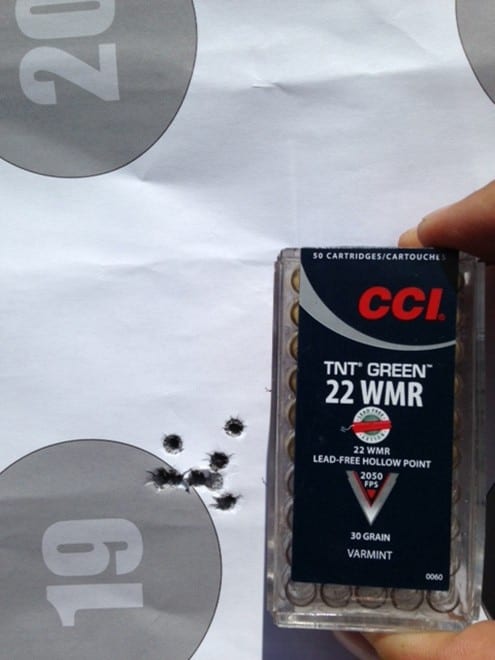 It has nothing to do with the gun, but the difficulty of finding .22 WMR ammunition is a potential deterrent to regular use of the CMR-30.  The cost can be perceived as high at $15-27 per box of 50, if one bears the memory of cheap .22 in mind.

The owner’s manual provides rather sternly-worded instructions about loading the magazines, and they’re not kidding.  Loading the 30-round mag is the only thing inconvenient about operating this gun.  Rounds must be loaded from the front, and slide back into place.  The manual recommends tapping the primer side of the mag on a flat wooden surface every 5-10 rounds at first, and tapping after loading every one or two rounds after 15 are loaded.  The spring is quite tight and much pressure is required to load the last ten rounds.  The rounds also tend, at any stage of loading, to get a little off kilter in their double-stack configuration.  The four misfeeds experienced during the 125-round test (a three percent failure rate) can probably be attributed to a slightly displaced round near the top of a full magazine. 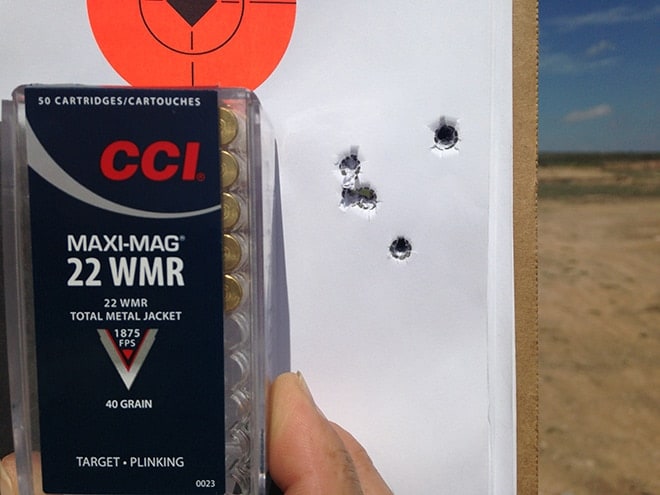 The loading process takes a bit of patience, and would be difficult in nasty weather.  Fortunately there are two magazines supplied with the gun, so a person can do a 20-round per mag load if they like, saving a lot of hassle and still allowing for lots of shooting between reloads.  To Kel-Tec’s credit, at least they inform the user about careful mag-loading rather than letting it be an unpleasant discovery.

The magazines drop easily from the well, loaded or partially full, upon release.  This allows one to run speed or tactical reloads without hassle. 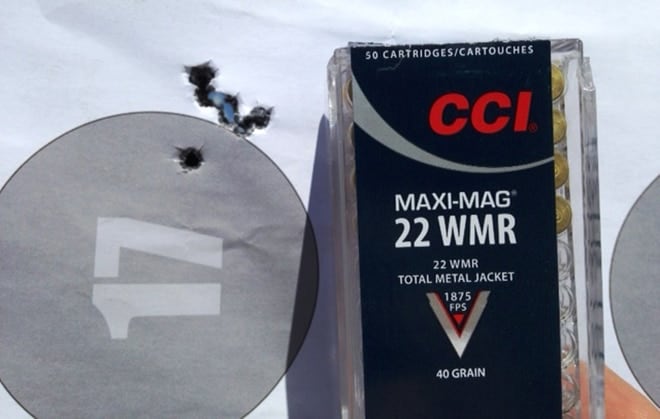 Disassembling the CMR-30 is a straightforward process, if unusual in comparison to most common semi-autos.  A small pin located on the frame and above the trigger must be pushed through with an improvised pointy object. The grip/trigger assembly separate as one unit, along with the stock, and barrel/bolt assembly which can be separated for cleaning. It’s not intuitive, but once done, it’s simple and expedient—just don’t lose track of that little pin. 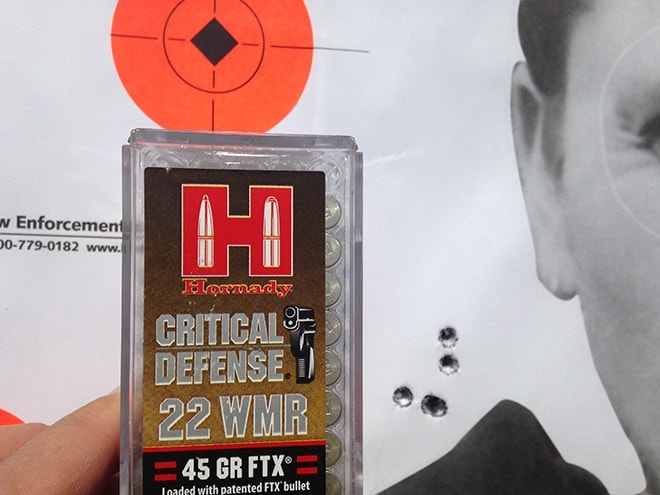 Fitted with a magnifying optic, zeroed for the shooter’s ammo of choice, the Kel-Tec CMR-30 is a highly portable, dependable and accurate tool for a variety of applications out to at least 100 yards and probably beyond.  For shooters whose visual acuity is good, the same is true for using the rifle with its stock sights.

What’s even more appealing is that the CMR-30 has a companion gun, Kel-Tec’s PMR-30, a full-size pistol of the same caliber.  Watch Guns.com for a future review of the PMR-30.

Kel-Tec has a track record of making innovative, dependable firearms that often sell for above MSRP.  Harsh criticism of Kel-Tec guns can be found online by, my guess, traditionalists made uncomfortable by firearms that are ahead of their time. Having run a couple different models, I believe such comments are mostly or entirely baseless. MSRP is $630.  As of this writing, online prices range from $700 to $1,000.

This one’s in high demand, for good reason.  It’s American-made, crammed with handy features, and exquisitely portable. It’s not every gun that, post-testing, every shooter says “I want one.” That was the case with the CMR-30.