Before KelTec began operations in 1991, there were compact pistols.  Most were made of steel.  The really small variety typically fired .25 ACP, a round that has never been touted for its stopping power.  If you wanted more punch, you could opt for a slightly bigger, heavier gun.  Or a revolver.  It wasn’t perfect.  We made do with what we had.

And then came Kel-Tec. The Florida based company began selling guns in 1995.  For a few years, their 9mm P-11 made up most of their sales.  But the P-11 was also a proof-of-concept, of sorts. Kel-Tec proved that people would buy pistols with small polymer frames.  So they made new guns that were smaller, lighter and thinner.  And they made them in the USA.  This has proven to be a sound business model.

The resulting P-3AT is compact, light (the lightest .380) and reliable. 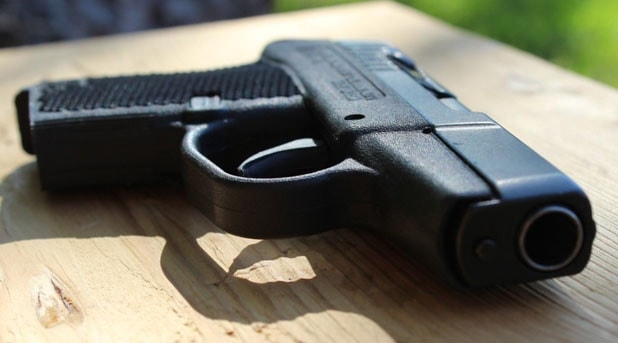 The P-3AT is not fancy.  It isn’t even particularly stylish.  The polymer frame feels a bit rough, and the finish of the slide is, at best, sufficent.  There are tool marks.  And not one of these things effects how the gun shoots.

The P-3AT is just over five inches long and three and a half inches high.  The gun is under an inch wide and weighs half-a-pound.  To say that it is small is an understatement.  It is comparable to a deck of cards, of a thick cell phone.

The magazine holds six rounds.  With one in the chamber, the P-3AT’s capacity is reasonable.  It would be easy to increase capacity by making the grip longer, or expanding the grip to accept a double-stack magazine.  But that would defeat the purpose.  If you must have one more round, a modestly sized extender is available. 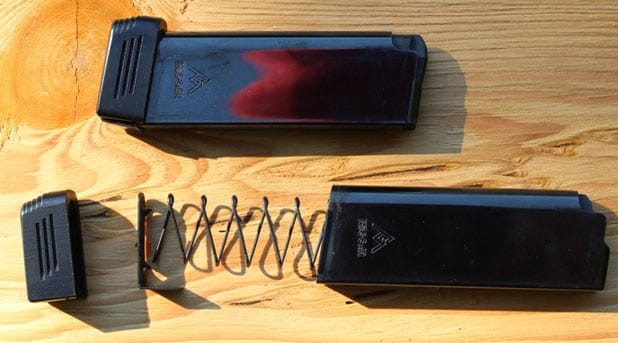 Unlike many of the guns that aspire to replace the P-3AT, the Kel-Tec comes in a variety of colors and finishes.  From chromed slides, to garish zombie green frames, the P-3AT is semi-customizable.  And there are plenty of aftermarket add-ons and gear designed specifically for this gun.  As if it needed anything else….

Some of the gun’s detractors point out that there are no manual safeties on the weapon.  I see this as an asset, a philosophical commitment to the very nature of defensive shooting.

The trigger pull, which is slightly more than five pounds, is light for a double-action-only pistol.  While this makes it easier to shoot, it makes some people nervous about carrying the gun in a pocket (at least with the trigger exposed).

There is no slide stop on the gun, either.  Practicing with the gun will help, but I almost always end up pulling the trigger on an empty chamber. Click.  This isn’t a problem for most defensive encounters.  If you are having to do re-loads with the P-3AT, you have bigger problems than the lack of a slide stop.

When the chamber isn’t empty, the P-3AT is a snappy little gun.  It kicks a bit.  The grip is thin and small, so there isn’t much to hold onto.  It isn’t brutal.  And it is very manageable.  Just know that you are going to have to hold it tightly. 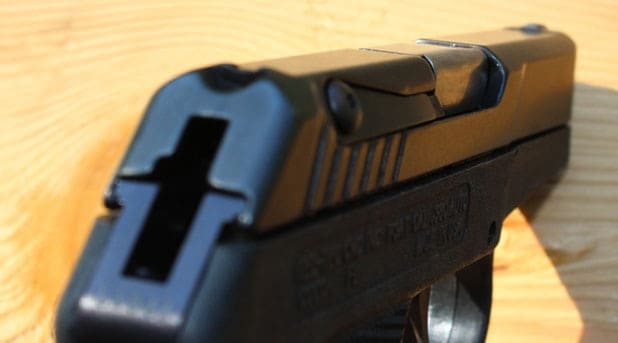 The sights on the P-3AT are minimal.  There is a slight bump on the front, and a milled cut out on the back.  The sights are a novelty, really.  I find myself looking down the flat portion of the slide more that at the sights.  But the sights work for what the gun is designed to do.  I find that these types of pistols are not as accurate as many snub-nosed revolvers.  But they are certainly accurate enough.

For this review, I shot the Kel-Tec from several distances (all under seven yards).  Accuracy increased as the distance to the target diminished.  This is a close-up gun.  From seven yards, I could keep the rounds in a 10-inch circle, but just barely.  And I had to concentrate.

I’ll admit that I’d rather practice shooting, the actual shooting part, with lots of other guns.  I’m used to handguns with exceptional accuracy.  I’m not putting the P-3AT down, at all.  It is designed to carry all of the time and only shoot when it has to.  And that’s where the gun excels.

Shooting is always important.  Live fire practice is irreplaceable.  But I see something just as necessary with the P-3AT, and that is drawing the weapon.  Many folks who carry pocket guns carry them in their pockets.  The P-3AT is small enough that it can get turned around in a pocket.  And it is big enough, if just barely, that when you grab it in your pocket, you may have trouble getting your hand out of your pocket.  It depends on the pocket. 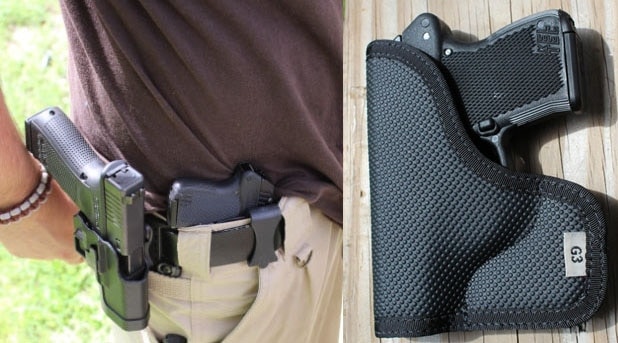 Just don’t shoot yourself.  When that adrenaline hits and your hand dives into your pocket, try to remember to keep your finger off the trigger.  Practice.  Empty the magazine, put it back in the gun, and try it out. Do it again and again until the P-3AT is as easy to pull from your pocket as your keys or your cell phone.

A good pocket holster helps.  They grip inside a pocket and hold the gun still (while covering the trigger).  Or check out the options for in-waistband holsters.  This minimalist design from Versacarry (above left) has a plug that fits inside the barrel.

Kel-Tec did it right.  They didn’t invent the polymer pistol, but they helped make it practical and popular.  After their success, the rest of the industry scrambled to get polymer framed .380 in stores.  The closest is the Ruger LCP.  It is shockingly close. 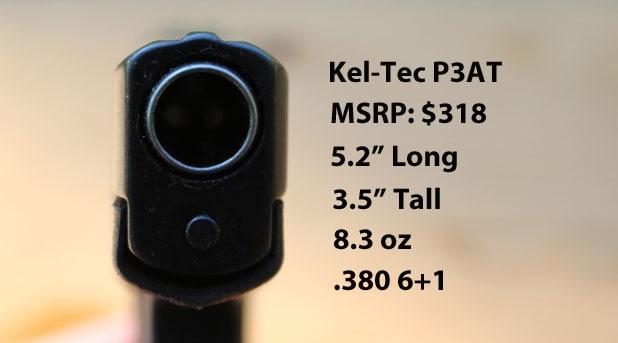 The Kel-Tec P-3AT is ideal for law enforcement.  It is also great for concealed carry.  While the .380 ACP is less-than-perfect as a defensive round, it can be effective.  And there is truth in the old saying: the .380 pistol you carry with you will be more effective than the 9mm or .40 that you don’t.  And when the gun is as small and light as the P-3AT, there is really not much excuse to leave it behind.