Have you ever looked at an AR-10 or an M14 and thought, I’d really like to put my face right on top of that chamber and pull the trigger? Well, maybe you haven’t. But if you had, Kel-Tec has the answer.  They’ve shrunk down the .308 into a compact package that safely and effectively delivers maximum firepower.

The RFB, or Rifle, Forward-Ejecting Bullpup, is Kel-Tec’s battle rifle.  The gun is 26-inches long, which is amazingly compact for a rifle with an 18-inch barrel.  At 8 pounds, the RFB carbine is lighter than most other battle rifles, but the shortened length is really the selling point.

The gun is sold without iron sights, but there’s ample rail on the flat top for the addition of just about anything.  And as this is a .308, the RFB’s range far exceeds the potential of iron sights or unmagnified optics.  You clearly can use it at shorter distances, so back-up irons are a must, but it can stretch out.

The Kel-Tec RFB’s magazine slides in behind the grip.  This one is a typical 20 round aluminum box mag, but it will take any standard FAL magazines.

The controls of the RFB are ambidextrous.  The charging handle can be switched from side to side.   The magazine drop is in the middle of the frame’s bottom.  The safety is accessible from both sides (and is really a very easy safety to see and use). 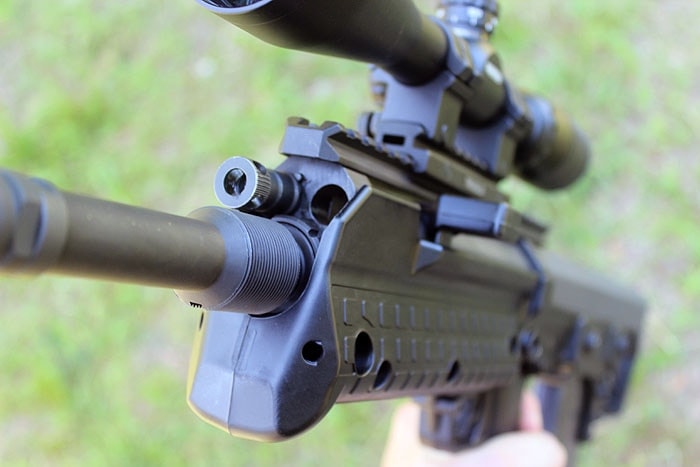 But the real novelty of the RFB is the way it ejects spent brass.  The shells are picked up by the extractor and pushed forward, down a tube that parallels the barrel.  The is what makes the RFB the RFB.  It takes a while to get used to.  Pull the trigger once, and the gun fires.  After the second (or sometimes the third) shot, a shell will scoot out the front end.

It isn’t distracting at all, as the brass falls out at an angle that is really hard to actually see with the rifle shouldered.

Kel-Tec has taken some nice safety precautions with the RFB.  The most notable would be the steel sheets that form part of the stock and protect the shooter’s face in the event of an accidental case rupture.  As you are squeezing your face right up against the chamber, having the extra protection is a bonus. 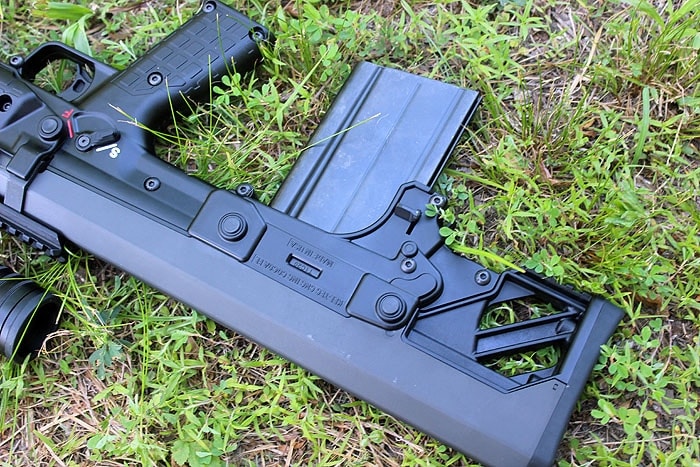 There are two sheets wrapped in a U, one inside the other.  Should something happen, the force of the explosion is channeled down, through the magazine well.  That would still be hellish, as this is a .308, but it’s better than taking it in the face.

I’m not going to gloss this over at all.  We had some issues with the RFB that we eventually attributed to a shitty magazine follower and a need for more gas.  But once we had those issues isolated, and fixed, the gun ran dependably well.

Let’s talk a bit about the gas.  The Kel-Tec RFB arrived under-gassed.  Our first two magazines of ammo weren’t feeding as a result.  Single shots would fire, but return stroke of the bolt would stop short.  This alone could be solved with a forward assist if the magazine had been feeding reliably.

But it wasn’t.  And so we were combining feeding with failures to extract.  And when all of that is happening in an open chamber, it is more easily diagnosed.  The RFB’s extraction and feeding is happening inside the stock, so it is impossible to see what’s happening.

And I mentioned the magazine’s follower. The magazine is made by DSA, and they have a reputation for making great magazines. But there’s no way around it — this one is a lemon.  Loading 20 rounds into the magazine meant certain failure.  The follower would take a nose dive, and jam.  After the first round would fire, the rest rattled around in the magazine as there was no spring pressure on the brass.  Dropping the magazine would dump out the rounds.

Yet DSA’s magazines are built well enough that a problem like this isn’t fatal.  They can be fixed.  The spring was catching under the front of the follower, pulling it down.  After taking it apart, repositioning the spring and monkeying with the fit, the magazine worked much more reliably.  And after some experimentation with the gas, the RFB began cycling more reliably. 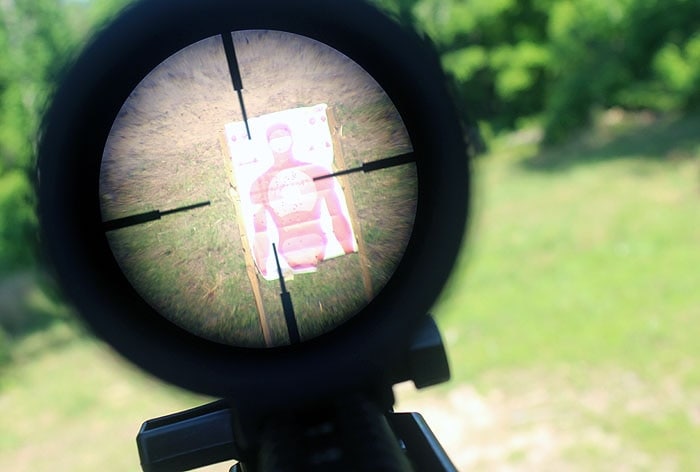 Sighting in the RFB was more difficult than most rifles.  We topped the gun with a Redfield 3-9×42.  We worked with a laser bore sighter and clamped the RFB into a CTK Gun Vice.  The shots were easy enough to center, but we got more vertical stringing than I would like.

After it was zeroed, accuracy was decent, but nothing like the potential of the .308 round.  I’m not going to blame this on the rifle, at all.  We used a variety of .308 with varying grain weights and bullet designs.  Though all worked, none seemed to be the ideal round for the gun.  We’re still looking for that.

But even so, the RFB isn’t built for bench-rest shooting.  It is meant to be carried.  It is designed to move.  And a two MOA group at 100 yards from the bench opens up to a 10 MOA group when shooting on the move, and that is still devastating to bipedal targets.

Recoil on the RFB is stiff, but there’s very little muzzle flip.  The forward placement of support hand and the grip helps with control.  As such, the RFB is capable of very rapid repeat shots.  But lean into the gun more than you would think necessary.  Otherwise, it will stand you up and take away any benefit your stance might provide. 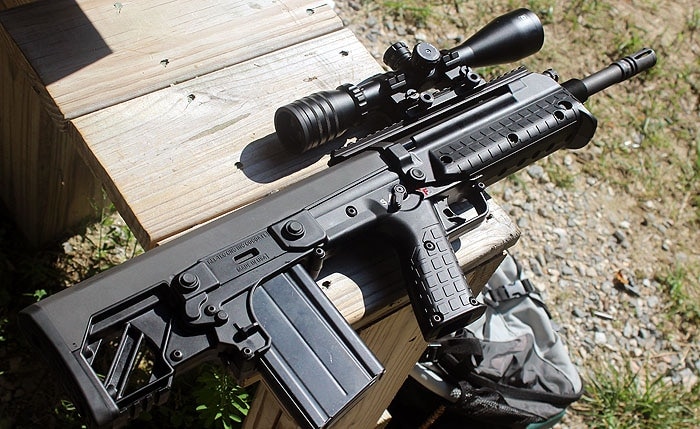 Even so, the recoil isn’t as bad as other .308s I’ve shot.  The thump is solid, but not enough to prevent a split second follow-up shot.

Kel-Tec is asking $1,880 for the RFB.  At that price point, I’d like to see a better magazine.  And two of them, at least.  This is usually not a complaint I make about Kel-Tec.  But this is one seriously effective rifle, and it deserves better.  The RFB would make a great DMR.  It would be a solid hog hunting gun, and a great option for hunting anywhere where there is heavy brush and a need for ballistic prowess.  And if your prepper’s arsenal includes a variety of calibers, one of them should be the often issued .308.

We’ll be working on the RFB and will come back with a follow-up.  So stay tuned.