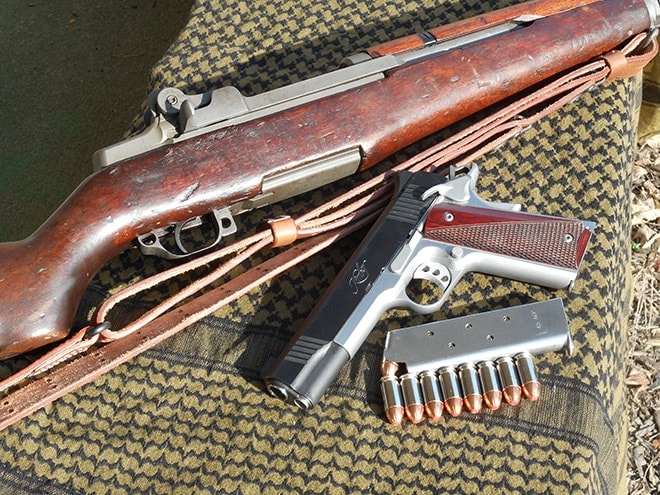 They are “What All Other Guns Should Be,” or at least that is what Kimber’s magazine ads claim.  Most Kimber owners that I know will tell you that they are perfectly satisfied with their purchase, however I have met some “gun guys” who will argue vitriolically that Kimber is a company to be avoided at all costs and who will occasionally insult the intelligence of the individual who decided to buy a Kimber (instead of dropping four figures on a custom build, of course).

Kimber-haters sometimes give me the feeling that they think Kimber-owners should leave the firearms community altogether for bringing such shame upon themselves and their families, but this intensity only served to make me wonder more if there was any truth to this belief: Are Kimbers really a pile of trash or are they truly what all other handguns should be? 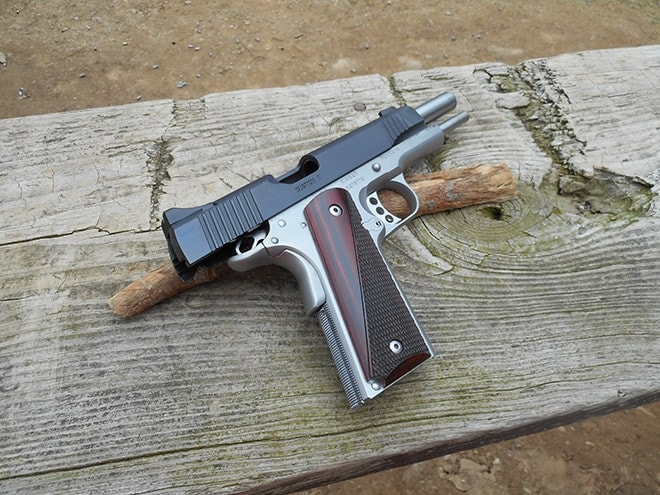 I walked into a local gun store fully expecting to purchase a rifle, but the brand new Kimber Custom II Two-Tone pistols on sale for $719 changed these plans. As I held the pistol Kimber’s advertisements raced through my mind alongside all the negative comments that I had heard about these handguns over the years. I am unapologetic about the fact that the slick look of the pistol helped to convince me to drop the cash on a full-size Custom II Two-Tone.

The pistol comes in a large black plastic and foam lined case. The Custom II itself is wrapped in a sealed bag and slathered in oil. Along with the Custom II and the case I received one seven-round magazine, a bushing wrench, a chamber flag, a manual, a small tube of oil and a decal. 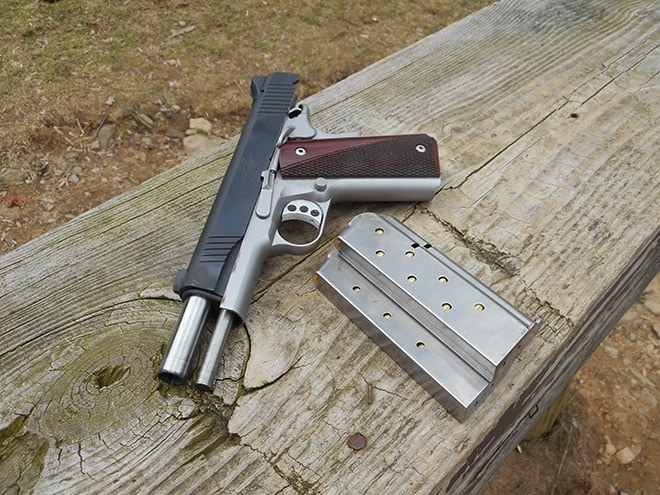 I was disappointed by the inclusion of only one magazine and I was forced to buy new ones. (Photo: Francis Borek)

Right away, I took issue with Kimber’s inclusion of only a single magazine. I had just dropped a lot of money on a semiautomatic handgun that proclaims itself to be what all other handguns strive to be, yet the Custom II only ships with one magazine. I know that many people simply toss away factory mags or mark them to be used only for practice, but it still feels really cheap to me. Because of this, I wound up purchasing a few extra Chip McCormick eight round magazines.

The Custom II is Kimber’s flagship model and the company’s basic 1911. The Two-Tone variant is considered new for 2016.  It is called the Custom II because when it was introduced many of it’s standard features were considered the domain of custom built pistols. 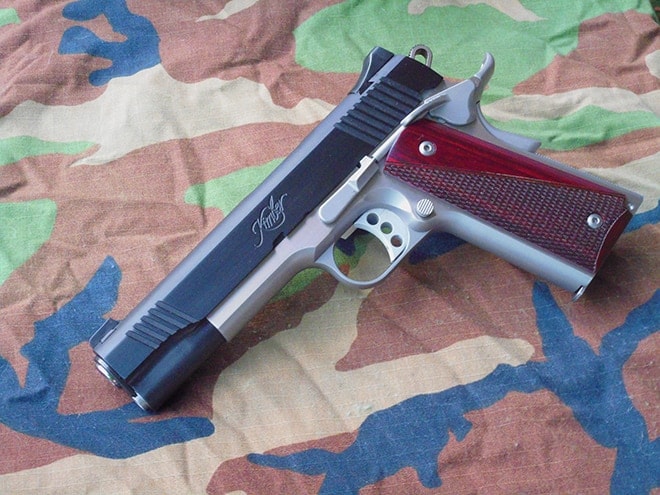 The polished stainless frame adds quite a bit of heft to the Custom II. (Photo: Francis Borek)

Front and rear sights are fixed and low profile. Rounded to make drawing slightly easier, they are surprisingly not a three-dot affair. The front strap is smooth, while the mainspring housing is flat, checkered and polymer. The slide is polished black carbon steel, with front and rear slide serrations. Kimber states that the barrel is a stainless, match grade barrel. Both the trigger and hammer are skeletonized.

The Custom II also features a full-length guide rod, which is supposed to help improve accuracy. The downside is that it makes disassembly and reassembly a pain in the rear. The frame is a polished stainless frame and helps to add quite a bit of heft to the Custom II. Rounding out the Custom II are the smooth/checkered rosewood grips. These are attractive stocks with the bonus of giving sweaty hands a secure enough grip for lengthy shooting sessions. Slide to frame fit is good, with a minimal wobble. 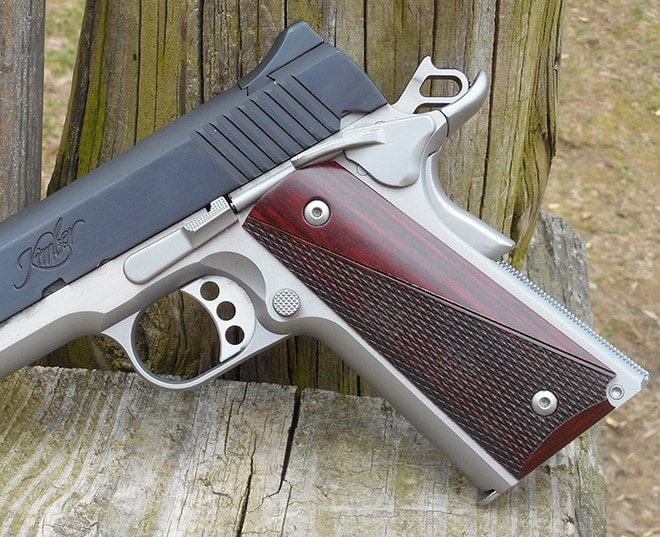 Included grips are both effective and attractive. (Photo: Francis Borek)

A bone of contention with many shooters is the inclusion of metal-injection molded parts, specifically the safety and slide release. While more traditionally made parts are preferred, they are an easy replacement for the experienced shooter.  For shooters entering the world of 1911s, this shouldn’t be a bother.

I’m certain we have all heard from gun store experts or read from internet commandos that Kimber pistols are built to such tight tolerances that it’s mandatory to fire at least 500-1,000 rounds through them before you decide to put one in any sort of self-defense or competition role. With that in mind I expected the Custom II to be a jam-o-matic during the first 250 rounds. What happened left me pleasantly surprised and vindicated in my decision to purchase the Custom II. 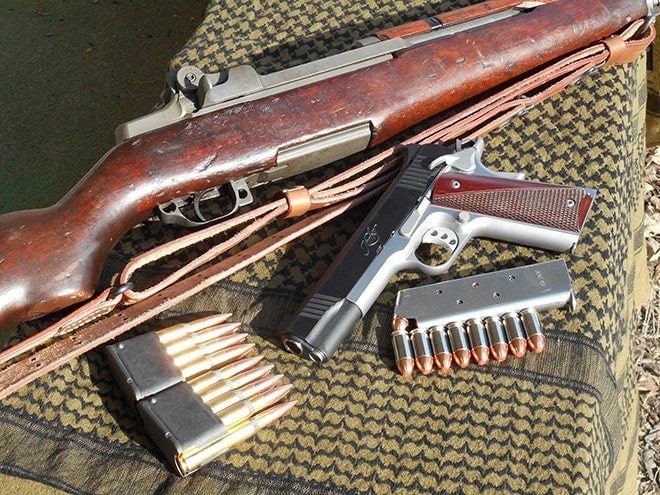 The Custom II performed flawlessly on two trips to the range and over 500 rounds. (Photo: Francis Borek)

The Custom II is advertised as having a trigger pull of four to five pounds and the trigger does feel to me to be in the five pound range. The trigger itself has a small amount of take-up with a minuscule amount of creep. Certainly not match quality, but better than a lot of pistol triggers that I have encountered over the years on both hammer and striker fired pistols.

Without a doubt, this pistol shoots better than I do. With Federal white box 230gr FMJ, my best five round group of the day came in at around one inch while standing at 10 yards. With Hornady Critical Duty a five round group came in at just over 1.5 inches. Certainly not “match grade”, but then again I’m not a match shooter who spends every minute at the range with the same exact gun. The accuracy I experienced was perfectly fine for home defense and a lot fun on the range.

But what I really enjoyed during that range session was the total lack of any sort of failures. No failure-to-feeds, no failure-to-ejects. A week later I was back at the range, with another 250 rounds to finish a break-in procedure that I now was feeling not actually necessary. I expected the same results with the same type of ammunition and that is what happened: excellent accuracy, no failures of any sort. 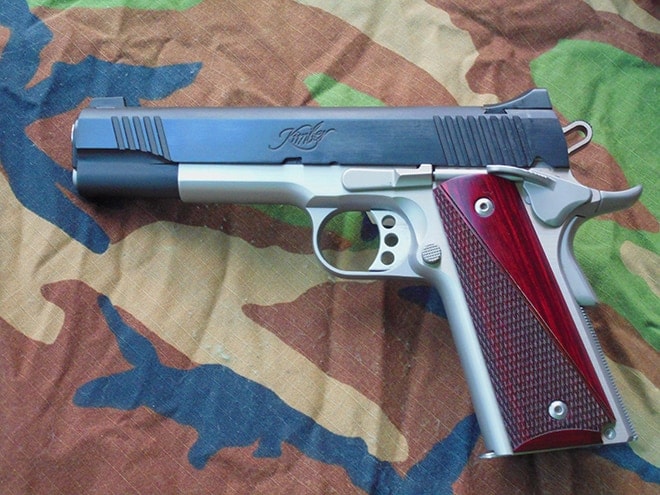 With an MSRP of $837.00, I feel this Kimber is priced appropriately for it’s quality. (Photo: Francis Borek)

While my experiences may infuriate the people I spoke of at the start of this article, they are the truth. While I’m still not totally convinced that the Custom II is what every other pistol should be, I feel that they are very competitive offerings in a crowded market. With an MSRP of $837.00, it is priced similarly to offerings from Colt, Springfield, Smith & Wesson, and SIG-Sauer.

Yes it is a 1911, a hammer-fired dinosaur from the turn of the century. However with it’s controls placed exactly where God and John Browning had intended them to be, this dinosaur can still hang with the best of them, not to mention it retains a distinct grip frame and angle which many still praise to this day.

Haters are going to hate, but it doesn’t change the fact that the Custom II Two-Tone is a classy, high quality and downright attractive offering from Kimber that works as well as it looks.