In the first Guns.com review of the Kimber Solo your author experienced some loading problems, but, like many malfunctions with guns right out-of-the-box, we attributed those to a break-in period and learning curve. After firing 300 rounds of premium grade ammo we think what was initially published was a fair assessment, however, we wanted to see how it performed a second-time-around.

After spending a couple months with the Kimber Solo Carry I have determined that it’s a gentleman’s get-of-me gun. I imagine the ideal carrier of this pistol is a man of style. A handsome suitor who generally wears a leather vest over a collared shirt and often escorts an elegant lady to a fine dining establishment for oysters and wine. But let’s not be sexist. It’s also suitable for that same lady of elegance as the length of the grip is very suitable for petite hands. 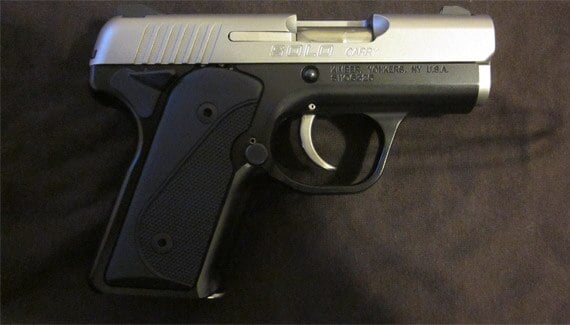 The gun really is stunning to look at. It has a smooth black aluminum frame and the slide has a very calming stainless steel finish. Aesthetically the Solo Carry is the antithesis of the more rugged Glock-style self-defense gun. Fans of the iconic 1911 might be more compelled to buy the Solo over one of its polymer-framed competitors.

The Solo is small enough to feasibly carry it in a pocket, depending on the type of pants, of course, but it would primarily be carried in a waistband holster, or for a woman maybe off the body. And because it has rounded edges and it’s very lightweight it is comfortable to carry with little or no discomfort.

However, for the actual shooting the second time around Guns.com used the cheap-o Sellier & Bellot ammo, which was available at the range. It’s good ammo, but I have never heard of it referred to as “premium.”

The rounds used were 115 grain FMJs, whereas the suggested ammo is 124 grain. Anyway, while using the less expensive ammo the gun cycled flawlessly, and even locked back on the empty magazines, which is something that was a bit fickle before.

The only time there was a problem was on the very first load. While the slide was pulled back and then released, the round failed to go into battery. When that happened the slide sort of jams shut, so the user cannot pull the slide back again to eject the round. The way to remedy that issue is to give the rear of the slide a tap or two with your palm and it’ll push the round all the way forward.

The Kimber Solo is far from a range gun. There were four of us on the range that day and after shooting 250 rounds through the gun, and the final verdict is it hurts. However, we realized if it is held and shot with one hand the recoil is incredibly mild and barely felt at all, which leads me to conclude that it’s more functional in a situation that forces you to be reactive, or in other words a situation where you quickly draw and shoot.

It’s not a gun that’s easy to take aim, it’s more for a target within five to 10 feet. Basically a situation where someone is grabbing at you or confronting you.

The Kimber Solo Carry is a handsome gun, much better looking than it’s competition, but it’s also more of an acquired taste. Much like any concealed carry gun constructed entirely of metal, the tolerances are tight and ti needs to be broken in. But during that break-in period, the user will most likely mature with it.