This was my first experience with a Garand—and I had to give it the full treatment.  This was incredibly daunting.  I doubt I’ll say anything that hasn’t been said before, but much bears repeating.  One of the most iconic weapons of WWII, the United States Rifle, Caliber .30, M1 Garand is worthy of a lot of ink.

The Garand was our primary infantry weapon in the Second World War.  Developed by Canadian John Garand at the Springfield Armory, the rifle was adopted in the late 1930s, just in time for the fight.

The Garand is an amazing weapon.  It is so overbuilt.  It bridged the gap between the old 1903 Springfield and the M14.  While it was a new design, the M1’s predecessors can been seen in its design.  It is so big.  The .30-06 is huge by today’s pugilistic armament standards.  Yet, we are slow to change.  Elements of the Garand’s simplistic design can be seen in many gas operated guns that followed it.

The rifle is heavy.  At around 10 pounds, the Garand would have been a beast to lug around Europe (and think about the bandoliers of ammo).  I bet it would have felt even heavier in the heat of the South Pacific.  There is a lot of steel in the Garand, but there is also a lot of wood.  While the enclosed barrel may be better protected and easier to hold, the Garand could easily have been slimmed down.  The extra weight, though, took up more of the .30-06’s recoil, and put weight behind the bayonet.

The gun is an eight shot semiautomatic.  The en bloc clips load and eject from the top. 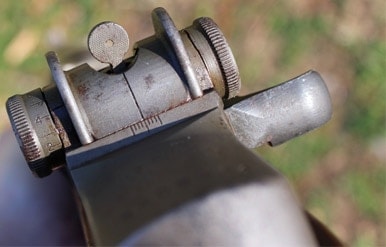 I have spent a good bit of time thinking about what to shoot with the Garand.  Perhaps I should have set up a silhouette at 200 yards or so, just to test the open sights, but I didn’t.  That would have tested my abilities, not the gun’s.

There are some Garands that have been modified to accept scopes.  Some were used as sniper rifles during the war while others have been tapped and drilled.  As this is a WWII era rifle, I’m not modifying it in any way.  So I’ll keep my range limited.

The Garand has a very nice ghost-ring sight.  If you’re unfamiliar with how these work, I’ll try to explain.  If you focus on the rear aperture, the round hole seems overly large.  But if you focus on the front blade, and then the target beyond, an optical illusion occurs.  The open expanse of the rear aperture closes in and the front blade fills the narrowed ring, which makes target acquisition easier.  There is a learning curve for every sight system and every gun.  The Garand is no different.

In the end, I decided on rather plain targets.  Even that, though, felt weird.  This gun has an oddly reverential feel.  I’m not inclined to instill objects with spiritual powers, but just holding this rifle inspires awe.  I say this with no intended hyperbole.  Every time I pick up the Garand I get the willies.

It is surprisingly hard to describe the emotion, so I’m changing the subject.

I did well with the Garand.  From 40 yards, standing, I could keep rounds in and around the center of the target.  The video should show this easily enough.

But I went back out, after the rain had cleared and the field had dried a bit and shot from farther out.  Braced at 100 yards, I could hit an area the size of a deck of playing cards.  Not every time—and my groups were loose—but the accuracy was more than sufficient. 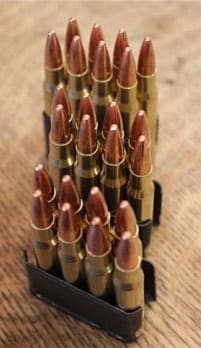 Don’t shoot modern .30-06 ammo from a Garand.  There’s a great article by Guns.com writer Art Merrill explaining why. The basic explanation is this—the powder loads are too hot.  Too much pressure behind the bullet means too much pressure in the gas system.  That means a bent operating rod.  A bent operating rod is not the end of the world, but it has to be fixed or replaced, and it kills the value of the gun (if it has any appreciable value).

American Eagle and Hornady both make loads specifically for use in old Garands. American Eagle’s cartridges have a 150-grain FMJ bullet with a muzzle velocity of 2,740 fps.

Hornady’s cartridges are a little more complex.  They’re A-Max bullets (fancy hollow points with red plastic tips).  The bullets are 168 grain and they move just a bit more slowly: 2,700 fps at the muzzle.

The Hornady shells are a bit more expensive, but both offer 20 rounds boxes that run right around $30.00, give or take.  That makes target practice a small investment.

But I’ll admit, I’m not all that interested in target shooting with the Garand.  I can’t call it nostalgia—because I wasn’t there—but I have whatever passes for fake nostalgia.  I love the sound of the ejecting en bloc clip.  It rings like a bell.  I could listen to that one tone all day.  If I had a one-shot en bloc (I hear they make such a thing), I’d shoot it over and over without my muffs on and probably go deaf.

This sound was supposed to have alerted the enemy to empty Garands.  Maybe so.  But the sound is exactly like the sound effect used in so many movies—so the sound makes me kind of giddy.  I know that is an inappropriate response.  But there it is.

If you’d like a Garand, they are available.  The Civilian Marksmanship Program sells surplus guns.  The CMP is an interesting entity.

There is such a wide range of prices on the others, depending on the condition and history of the guns.

I’m thankful that I never had to use a Garand.  I had five uncles who served in the Army during the Second World War.  They all came home, which seems like a miracle to me.  I can only imagine what they saw and what they did.  There is no movie or book that will ever come close to replicating the experience.

My life is easy.  I set out on a rainy January day to shoot holes in a piece of paper.  I was burdened by my load because I decided I’d carry the gun without a proper sling.  I may have carried it a mile.  By that point, I understood that the gun was heavy.

But I won’t ever understand the Garand.

I could take it apart, put it back together.  I could field strip it a thousand times.  I could master the ghost ring sight and shoot holes in the undersized hearts of Virginia whitetails, and I would not know this weapon.

I’m thankful for the men like Garand who were on our side.  I’m thankful for the folks at Springfield Armory, and the other contract companies, who built these guns.  I owe more than I’ll ever know to the men who lived and died with these guns.  For me, shooting a Garand is an honor and a tribute to those who were, by necessity, much smarter, much stronger than me.