Magnum Research made their name with the iconic Desert Eagle, a large, heavy, powerful semi-automatic that shoots cartridges primarily used in revolvers like .357 Magnum, .44 Magnum and .50 AE.

And the name is now so iconic and so well known, I guess the company figured, why not slap it on to other products? Like the Micro Desert Eagle in .380 ACP. Even though this gun is very small, fairly light, has a tiny barrel and shoots a marginal cartridge.

The Micro Desert Eagle isn’t a bad gun. Not really, but you have to consider it on its own terms rather than as part of the Desert Eagle line. It was initially designed and sold by ZVI in the Czech Republic as the ‘Kevin’—a pistol too small to be legally imported into the country under U.S. law. Magnum Research bought the rights to the design, tweaked it a little and started making it in the U.S. 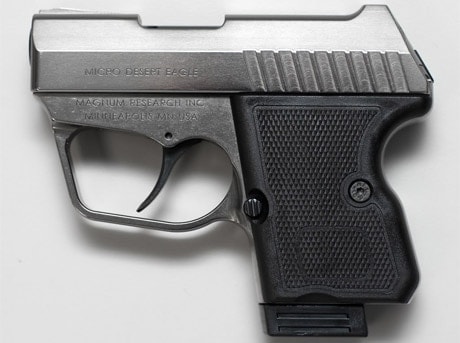 This is a very small gun. Seriously, of the ‘micro .380s’ available on the market, this is one of the smallest. It’s more than half an inch shorter than the Ruger LCP or Kel-Tec P3AT, but about the same size in both height and width.

That missing half inch is mostly in the barrel and that has a significant impact on the performance of bullets fired from this gun. In our Ballistics By The Inch testing, the 2.2-inch barreled Micro Desert Eagle substantially underperformed in all ammo tested against all other ‘micro .380s’, losing 100 fps or more. And that translates into less muzzle energy and less stopping power.

Now, in terms of self-defense, power isn’t all that matters. Many people think that it is of much smaller importance than placement—and to a large extent I tend to agree—but that means that you need to be able to shoot your gun well to start with and then be able to put follow-up shots on target.

I found the Micro Desert Eagle very difficult to shoot accurately for a first shot—the gun is small enough and the trigger guard is large enough to present big problems for my bigger hands. Simply put, it is hard for me to hold the gun worth a damn.

However, the recoil wasn’t bad. This is due to the weight of the all-metal construction—the Micro Desert Eagle weighs in at 14 ounces, significantly heavier than polymer guns—as well as the gas assisted blowback system. So someone with smaller hands may find initial shot placement and follow-up shots perfectly acceptable. 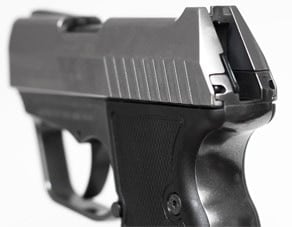 But there have been a lot of reports of people having some problems with the gun not cycling properly, however, this is usually attributed to limp-wristing, which just happens to be a problem with many small semi-auto guns. Stiffening your hold on the gun usually helps resolve this, as it allows the gun to cycle completely.

The sights were minimal, as you would expect with a gun designed for pocket carry. The Micro Desert Eagle, also like many self-defense handguns, was designed without an external safety. Instead it has a very long double-action trigger. I found the trigger to be decently smooth, but very hard (10 pounds or so) and as noted very long. This made it even more difficult for me to shoot the gun accurately since, by the time my finger had pulled the trigger back far enough for it to fire, my hand was all scrunched up and the gun was shifting in my grip.

Again, someone with smaller hands may find this to not be a problem.

In the long run these guns are reported to hold up fairly well, but there is one minor problem I’ve seen reported and that’s that the grip screws tend to loosen. And if that happens the spring on the magazine release will also get loose and this can lead to unexpectedly dropping the magazine.

So, there ya go. If you want a very small .380 and are somewhat recoil-sensitive, see if your hands will fit a Micro Desert Eagle and allow you to shoot it well. Otherwise, consider something else.

The Micro Desert Eagle is typically found anywhere from $350 to $430.