Gun Review: Manurhin P1 9mm: Might be a better buy than the German P38

As I noted in a previous review, the German P38 pistol was a very well made and very popular sidearm introduced during World War II as a replacement for the old P08 Luger.

Well, come the end of WWII, those weapons factories that hadn’t been destroyed during the conflict were shut down, sometimes with their equipment removed and shipped off, other times the entire factory placed under the control and management of one of the occupying powers – as was the case with the Walther facility, where the P38 was produced. The factory was passed into the control of the French and under the new management the facility started operating under the name of Manurhin, but used Walther equipment and upheld its quality standards. 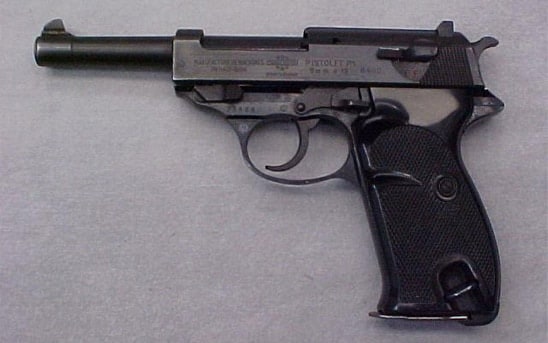 And so the P38 became the P1, made by Manurhin, with some minor post-war design changes (which I believe were the work of Walther engineers). The biggest of these was a shift over to an aluminum alloy frame. From the early 1960s until the mid 80s the Manurhin P1 was available and widely used by police departments in West Germany. And a number of these guns were imported to the US as they were retired from service by different police departments. I recently had a chance to shoot one, side-by-side with an original P38.

The Manurhin P1 compared to the German P38

Honestly, there really wasn’t much difference, except that the P1 was a bit lighter due to the aluminum frame (the P38 was all-steel). For all intents and purposes, both guns felt and shot much the same. 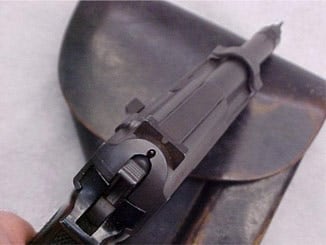 The P1 operated the same as the P38: it is a true double- and single-action gun. It could be carried with the chamber loaded and the hammer down (using the de-cocking lever), so that with the safety off a long pull of the trigger would cock and then fire the gun.

As noted in my other review, the gun also features a manual safety, as well as a slide-lock mechanism and take-down lever, all on the left side of the pistol. As was fairly common for European handguns, the magazine release was at the bottom of the mag well. There was a loaded-chamber indicator and the slide would lock back after the last round was fired, typical for most combat-style handguns.

The sights on the P1 hadn’t changed: a front blade and rear notch. Nominally adjustable through drifting and filing, the sights were usually considered adequate for short-range defensive use. Just as with the P38, my experience with shooting the gun gave pretty consistent four-inch groups at 25 yards, though in this case the gun didn’t seem to shoot as low as the P38 did.

The grips on the gun were the same Bakelite type; a hard black plastic with ridges, which allow for a secure hold, but can get to be fairly slick. On the lower rear of the left grip there was a notch and bar for attaching a lanyard.

My understanding was that this particular gun dated back to the mid-60s, which was after some minor modifications were made to the design in response to problems with cracking slides. Given that it was almost 50 years old, it seemed to be in excellent condition. Shooting it was fine and very much the same experience as shooting the P38. 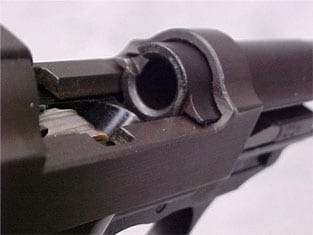 The recoil springs were still strong. The trigger was decent, fairly smooth with a little more creep, and again only about four pounds in single action – perhaps six in double action (the first round fired when the hammer was down).

Recoil wasn’t a problem, though was perhaps a little more noticeable due to the slight weight difference. But the gun was still solid when shooting standard-pressure ball ammunition and even the +P JHP self-defense ammo we (Ballistics By The Inch) shot out of the gun didn’t make much of a difference.

Just as with the P38, I didn’t care for the de-cocker. But then, de-cockers always make me a little skittish. And since the P1 hadn’t been changed in this regard, I figured that it was just as prone to the kind of wear that would allow the firing pin to contact a round in the chamber with sufficient force to set it off – always, always, ALWAYS have the barrel pointed in a safe direction when using a de-cocker.

Given that the P1 is essentially a P38, much of the information out there about that gun is still applicable. And chances are, you can find one for a couple hundred dollars less than a P38, somewhere in the $400 to $500 range. So if you don’t care whether the gun has any WWII ‘history’, but are looking for a solid quality firearm, it might be a better move to find a good used P1 and go with that.