The German-made Mauser P38 in 9mm Parabellum was said to be such a well-made and popular pistol that many American troops in the European theater of World War II preferred it over their own sidearms. I didn’t immediately see the appeal to it until I had a chance to try one and then I totally understood. 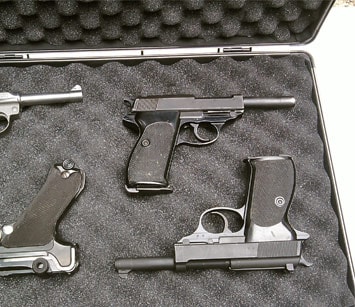 The Mauser P38 was designed by Walther as a replacement for the old P08 Luger. It was less costly to manufacture, a bit lighter in turn more compact, held the same number of rounds as the P08, and still performed very well. Mauser was one of the wartime manufacturers of the P38. Enough of the guns were made and survived the war that they’re still relatively common and can be found for as little as $600 to $700, depending on condition, of course.

The wartime P38s were made with all steel frames, while the postwar guns used an aluminum alloy for the frame, so they weighed a few ounces less than the earlier models, which weighed 28 ounces.

The Mauser P38 design was a true double- and single-action gun and was actually the first locked-breech designed gun that featured this. That meant that the gun could be carried with the chamber loaded and the hammer down (using the de-cocking lever), so that with the safety off a long pull of the trigger would cock and then fire the gun. The advantages of this in terms of safety and readiness was apparent and a large part of the reason why the gun proved to be so popular.

As noted above, the gun did also feature a manual safety, as well as a slide-lock mechanism and take-down lever, all on the left side of the pistol. As was fairly common for European handguns, the magazine release was at the bottom of the mag well. There was a loaded-chamber indicator and the slide would lock back following the last round being fired, typical for most combat-style handguns. The sights on the P38 were basic: a front blade and rear notch. Nominally adjustable through drifting and filing, the sights were usually considered adequate for short-range defensive use. That was my experience with shooting the gun—it seemed to shoot low at 25 yards, but gave pretty consistent four-inch groups at that distance.

The grips on the gun I tried were the mid-war Bakelite type, a hard black plastic that was fairly slick but ridged to provide a secure hold. On the lower rear of the left grip there was a notch and bar for attaching a lanyard, but I didn’t find this any kind of problem with shooting the gun.

Overall shooting the P38 was fine. I don’t know all the history of this particular gun, but the current owner hadn’t done much to it in terms of repairs, and I think most everything on it was original. The recoil springs were still strong, but there was no difficulty in pulling back the slide to load a round.

The trigger was decent, fairly smooth with little creep, and only about four pounds in single action—perhaps half again that amount in double action (the first round fired when the hammer was down). 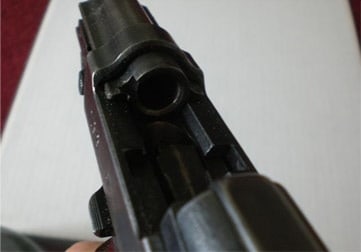 Recoil wasn’t a problem. The gun is large enough and heavy enough to be a solid platform for shooting standard-pressure ball ammo, and even the +P JHP self-defense ammo we shot out of the gun didn’t make much of a difference.

One thing I didn’t care for was using the de-cocker, but then, de-cockers always make me a little skittish. And I had read that this was one of the problems that can come up with worn P38s—it is possible that the positive block on the firing pin can get worn and allow for an accidental discharge. As always, I just made sure to have the barrel pointed in a safe direction whenever I used the de-cocker (and there wasn’t a problem with this gun).

Again, I don’t know all the history of this particular gun, but it was in surprisingly decent condition.  There was minor holster wear on the edges and corners of the gun, but for the most part the fit and finish was still quite good. Clearly, it was very well made to begin with, and hadn’t been abused.

There is a lot of information about these guns available, and should you either inherit one or pick up one used, if you want you should be able to figure out where and when your particular gun was manufactured based on the various factory and proof markings.

And as noted, since there are so many still out there, you may be able to find one in decent shape for surprisingly little money if it is just one of the common guns. But there are those guns that are particularly notable for their rarity or history, and can command a very high price for collectors. Shop wisely.