I’ll admit I’m enamored with Mossberg’s pump guns.  I have nothing against the Remington 870, or the Ithaca Model 37.  I like them, too.

But I always come back to Mossberg.  Call it brand loyalty.  That said, I can back up my opinions with some pretty solid evidence.  The guns work well.  The controls are ergonomic and intuitive.  They are priced competitively.  And they’re made here in the states.

The Mossberg 590A1 comes in several different variations.  All of them have the utilitarian combat shotgun at heart.  This gun has a 20 inch barrel.  The additional inch and a half over the typical 18.5-inch barrel gives the 590A1 just enough room for an extended magazine tube.  The tube will hold nine 2.5-inch shells.

The 590A1 has a typical 500 pump action.  The magazine tube loads and feeds from the bottom, and the gun ejects out the right side.  Ejection is flawless and consistent.  The pump requires effort, but most pumps do.

The tang safety is easily worked with the thumb, and the slide release is just behind the trigger finger, and contoured to fit a shooter’s middle finger. 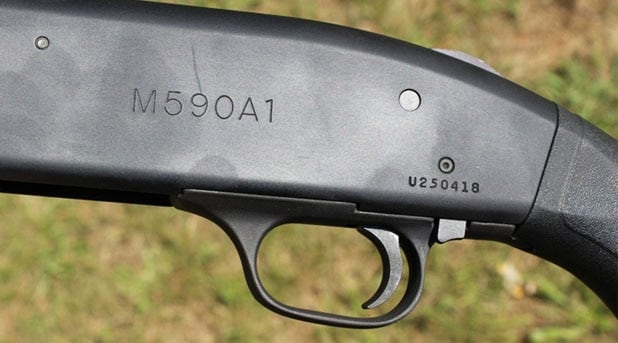 The 590A1 has a couple of features that make it unique.  The barrel has thicker walls than those of the 500 series guns.  This adds a bit of strength to a gun built to military specifications.  And the trigger guard is steel.  The trigger itself is stiff enough to guard against adrenaline ruled accidents.

Apart from the extended tube, this 590A1 is close to stock.  Mossberg sells configurations with three dot sights, or ghost ring sights, but this one has a plain bead front sight.  Some have rails on the top and on the forend grip.  Stocks are available with speed feed option, or plain, or adjustable with pistol grips.

The receiver of the 500 and 590 is aluminum.  The rest of the 590A1 is steel and Parkerized.  The finish has the durable feel and flat matte finish that defines good Parkerizing.

There are two reasons why I wanted a comparably stock 590A1.  First, this is the pinnacle of the 500 line.  I wanted to be able to compare the 590A1 to the 500 and the Mossberg Maverick, without comparing any of Mossberg’s various extras.

I also wanted to see what is possible in after market extras.  But I’m not there yet.  It works just the way it is.

Part of the brilliance of the pump design, guns like the Mossberg 500, or the Remington 870, or the Ithaca Model 37, is that the guns work.  I’ve driven these guns hard.  I’ve tried to make them fail, and I can’t.  If the slide moves, and there is a shell in the magazine tube, a pump shotgun will feed.  And with a shell in the chamber, the rest is easy. 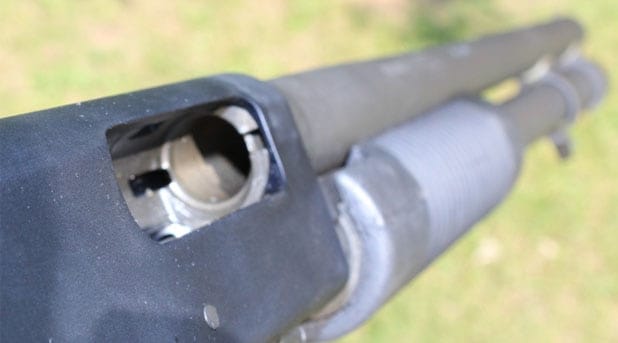 This is not the case with automatics.  Gas fed extraction systems need much more care.  Switching between rounds can cause problems.  Too much gas is rarely a problem, but too little gas shuts an autoloading shotgun down.

I’m not saying that these problems can’t be overcome.  For sport shooting, or hunting, an automatic action is fine, maybe even better.  But I prefer the pump for defense and tactical uses, when a shooter’s life might depend on the gun working reliably. 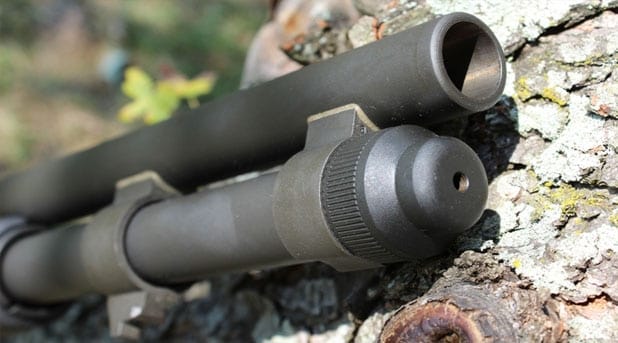 I have a hard time telling the differences between the terminal ballistic performance of shotguns with 18 to 20 inch barrels.  I don’t regularly measure shot patterns from defensive shotguns.  I typically assess accuracy on silhouette targets with various sized shells of birdshot and buckshot.  But I do shoot slugs.  The 590A1 will keep slugs on target from close to 100 yards.  I think with consistent ammunition, and a bit of practice, I could get even tighter groups.  And that’s with the bead sight.

The 590A1 in this particular configuration weighs just over seven pounds, empty.  The MSRP is $631.  That’s more than a comparable 500 model.  And most of us will never need the extra durability of the 590A1, so that might factor into a decision.  The 590A1 functions in the same way, and is just as reliable as the other 500 series shotguns.  The difference is in how the gun might stand up to use and abuse.

But I’m obsessed with the best.  And this is the best pump defensive gun I’ve ever shot.