The Mossberg Blaze 47 is a mostly polymer, extremely lightweight rifle based on the AK-47. This rifle is capable of holding up to 26 rounds of .22 LR (25 in the magazine; one in the chamber) and has a rifled twist of 1:16. Add to this package the ability to choose a rifle with an adjustable stock or wood finish, and there are enough options for any jaded shooter to really enjoy this gun. 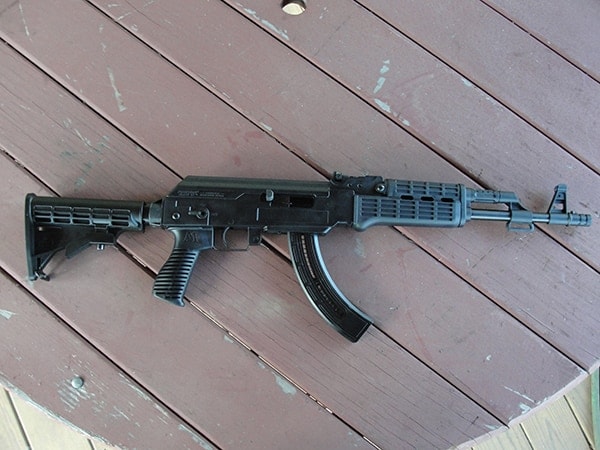 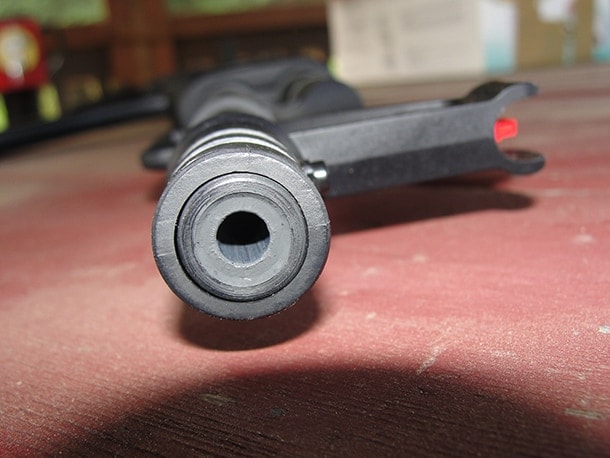 The all metal barrel has a 1:16 twist and was incredibly accurate right out of the box. (Photo: Joshua Gillem)

If you asked a group of people why they continue to go to the range, most of them would say that it’s because they want to improve their accuracy. One thing this little gun has going for it, and what may surprise some folks who feel that this is not the AK-design’s strong point, is superb accuracy right out of the box.

I was able to hit tight groups at center mass with almost every shot fired at 15, 25 and 50 feet, respectively. This is due, at least in part, to the fiber optic sight system Mossberg installed on this fun little plinkster. The rear sight is fully adjustable for windage and elevation to ensure that the shooter is on target after each steady squeeze of the trigger. 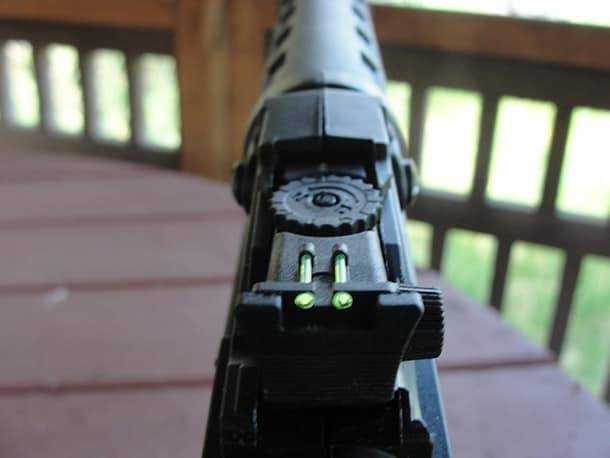 The adjustable rear sights on this rifle did their job nicely. (Photo: Joshua Gillem)

Quality of the gun

While it is fun to shoot and easy to get on target, there was one area where I was left unimpressed. The overall quality of the gun with the polymer receiver and looseness of the components leaves a lot to be desired. 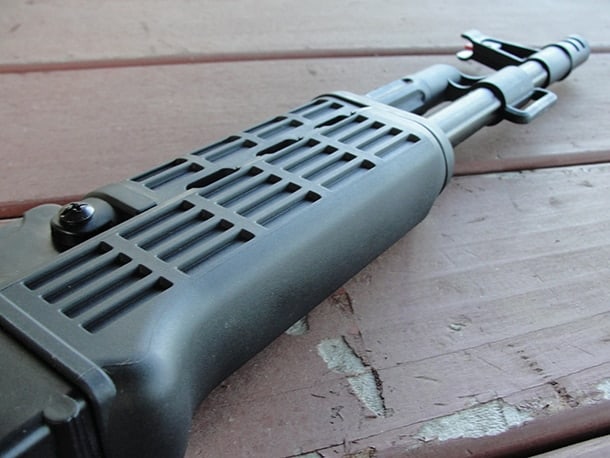 The Mossberg Blaze 47 is a mostly polymer affair. This makes for a lightweight gun. (Photo: Joshua Gillem) 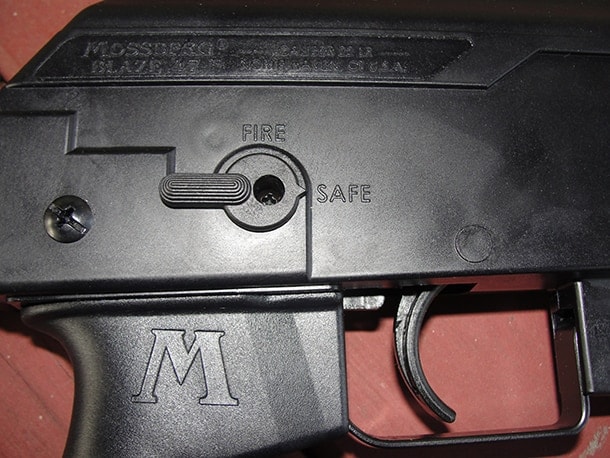 The Blaze 47 has an AR style safety which I found to be on the flimsy side. (Photo: Joshua Gillem)

Even though I do have over 500 rounds through it without a single failure, sometimes you just want to have a bit more sturdiness in something meant to contain a mini explosion. There just isn’t all that much metal on this gun.

In addition to that, the single screw holding the grip onto the receiver feels as if it doesn’t do a good enough job. There was one point when I was handling the rifle that I thought I would accidentally break it. Thankfully, I didn’t.

The rifle also sports an AR style flip safety, which, at best, seems a little on the flimsy side. Try as I may, though, I couldn’t get it to malfunction. However, it already seems loose and I’ve only had the gun for less than a month. I’d hate to see what happens to it after years of use.

The plus side to plastic 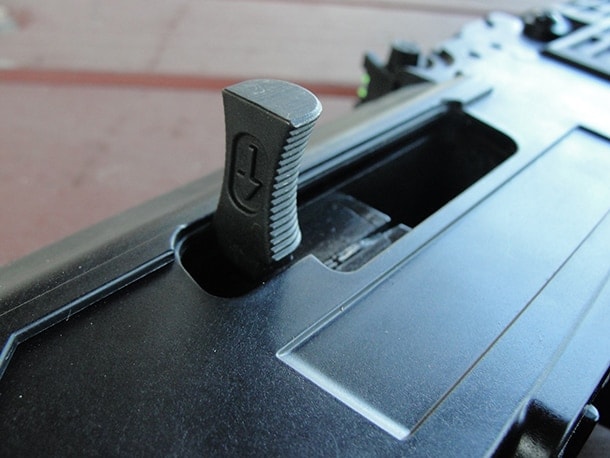 There are very few metal components on the Blaze 47. (Photo: Joshua Gillem)

Having an all polymer gun (minus the barrel and a few other things) isn’t all bad, though. One benefit to using an “other than metal” receiver is the overall weight reduction of the Blaze 47. The weight, even with a loaded mag, makes for some very comfortable, not to mention long lasting, offhand shooting.

I opted to test the Blaze with the adjustable stock, and I’m happy I did because the gun wasn’t comfortable to shoot until I found that sweet spot where it was just the right length. 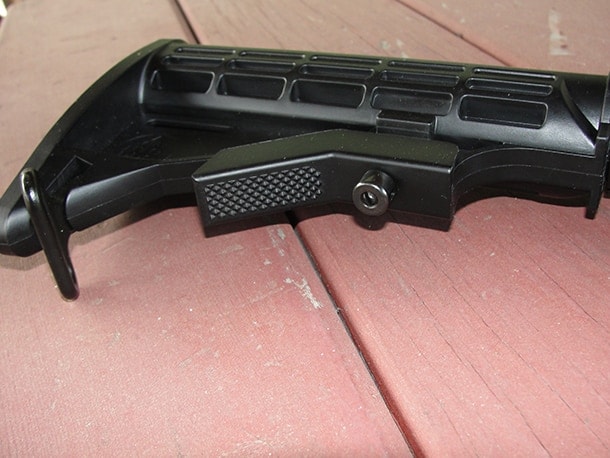 I chose the adjustable stock option for the Blaze 47 and I was glad I did after I found the right length. (Photo: Joshua Gillem) 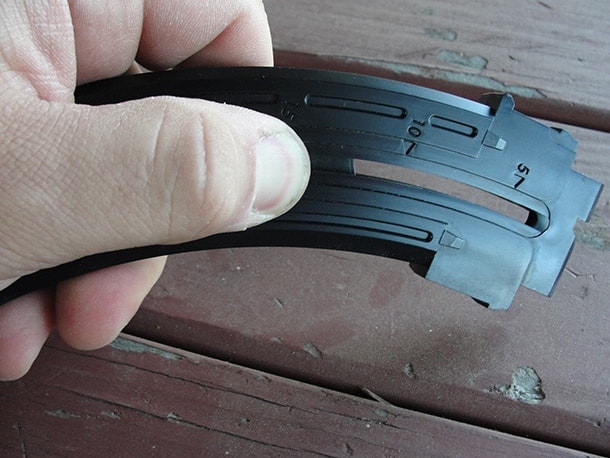 These 25-round magazines sent over 500 rounds through my Blaze 47 without a single failure. (Photo: Joshua Gillem)

However, if the traditional AK look is more along the lines of what you want, you can get the wood finished stock and handguard to suit your aesthetic needs. Personally, I’m all about the tactical look.

In an attempt to please some of the less gun-friendly states, Mossberg offers a 10 round magazine in addition to the 25 round mag that I chose to test. Unfortunately, the 10 round mag looks less authentic. The one Mossberg sent with the gun worked flawlessly after each round. But if your state brilliantly limits the number of rounds your magazine can hold, the available 10 round mag is the way to go. 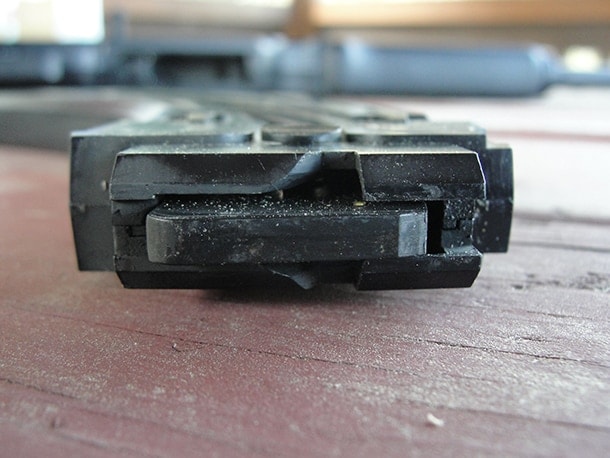 Speaking of the magazine, it is very easy to load, all the way up to 25 rounds. However, it did have some excessive wobble in the mag well. But as I said, after 500+ rounds, I didn’t have one failure. Furthermore, mag wobble is a trademark of most AK’s. 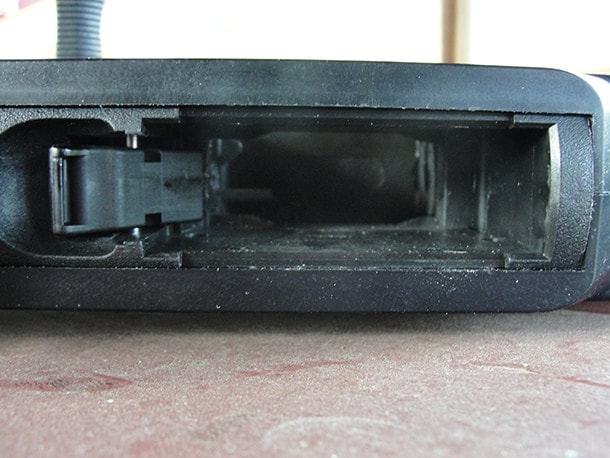 I noticed some wobble when the mags were seated in the mag well, though this is a well known characteristic of the AK design. (Photo: Joshua Gillem)

Overall, this is a fun gun to shoot. If you’ve always wanted to get your hands on an AK, or are looking for a different and inexpensive gun to plink around with, then this may just be the gun for you. It is accurate and reliable, even after I put it through the ringer with my testing. I’m not sure how happy I am with just about every piece being made out of a composite material, but it seems to work well and is super lightweight. 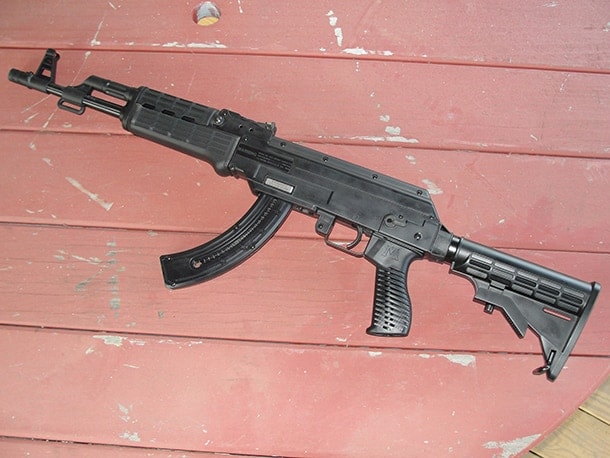 The Blaze-Nikov 47, as it is lovingly dubbed by Mossberg, has a suggested MSRP of $375.00. In many cases, you’ll be able to find this gun at under $300.00. Is this a good price? Well, that depends largely on your own preferences because there are quite a few other 22s out there.

However, if you’re into the novel and fun to shoot gun themes, this little plinker is right up your alley.