As the battle of the budget deer rifles rages on, Mossberg is quietly cranking out a line of USA-Made, fully-featured whitetail slayers in a myriad of caliber and stock options that make the budget rifle conundrum a seemingly simple one.  The new Patriot gives you a fluted barrel, spiral bolt, recessed crown, dropbox mag, walnut stock, and Vortex optic all under $550 MSRP.  Sound too good to be true?  It’s not. Here’s why. 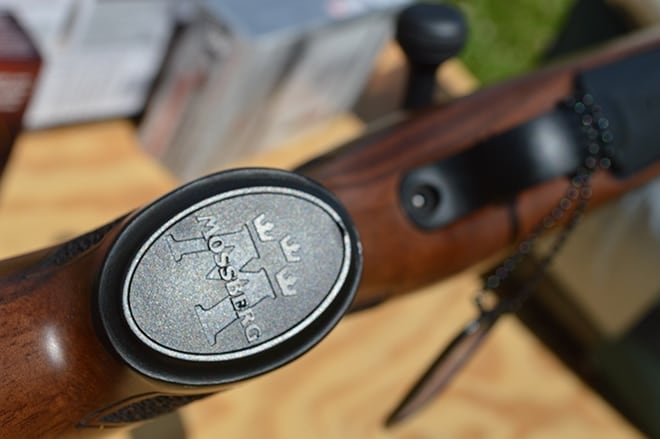 Though we sought out one of the new-for-2016 Walnut versions, the Patriot line was introduced a year ago and has been growing.  In addition to the initial black synthetic stocked models, there are now synthetic Kryptek Highlander camo options, laminate stocks with Marinecote weatherproof metalwork, and scoped combos for each. 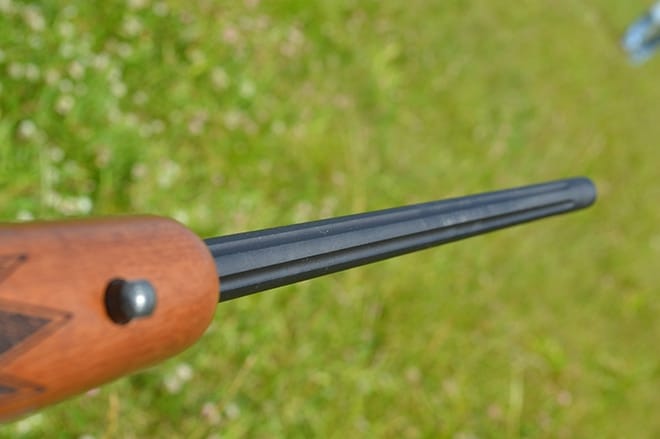 Regardless of the outerwear, all Patriot rifles have 22” fluted barrels and come with either four or five round dropbox magazines, depending on the caliber.  While most models come with Weaver-style mounts, several are available with adjustable iron sights as well.  The Lightening Bolt Adjustable (LBA) trigger is reminiscent of Savage’s Accutrigger and is user-adjustable from two-to-seven pounds.  Sling swivels and a Mossberg-brand flexible rubber buttpad are standard. 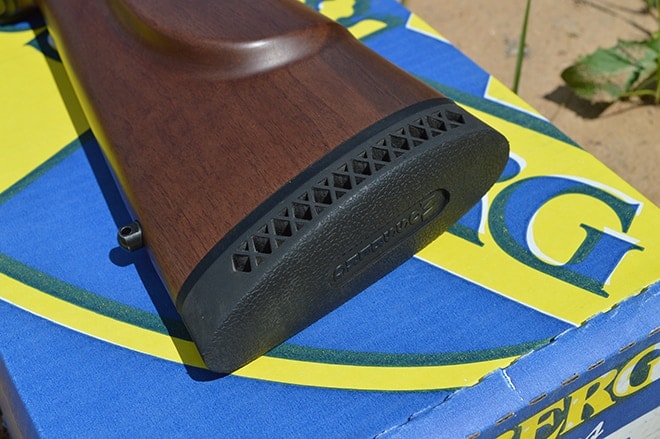 Weight varies from 6.5 to 7.25 pounds for the bare rifle depending on chambering and stock choice. Speaking of that, calibers run the gamut from .22-250 all the way up to Mossberg’s first “safari” model in .375 Ruger.  The most attractive part is the price.  MSRP on the Patriot line runs from $384-582 with real world prices even more appealing. 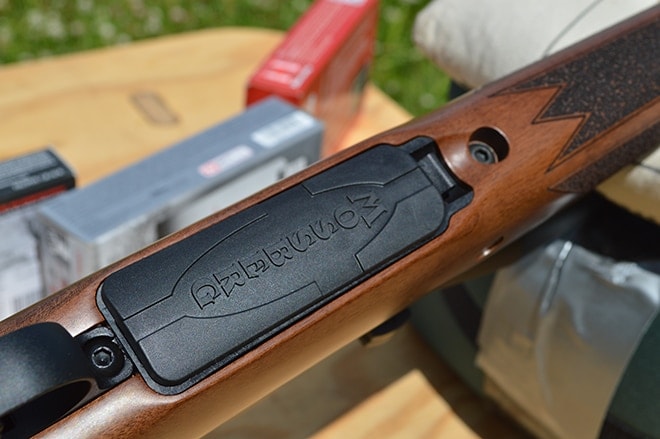 If that’s not enough to please every palate, there’s also a Bantam/Youth Patriot that includes a “grow-with-you” stock spacer system.  Available in camo patterns like Moonshine Muddy Girl, the Bantams are attractive to young-uns and small-framed shooters, and best of all, the Bantams still have all the features of the standard Patriots.  A Patriot Night Train rifle geared toward the tactical market includes a threaded barrel with a Silencerco brake, QD suppressor mounts, picatinny rail, included bipod, optic, and adjustable-comb-system. 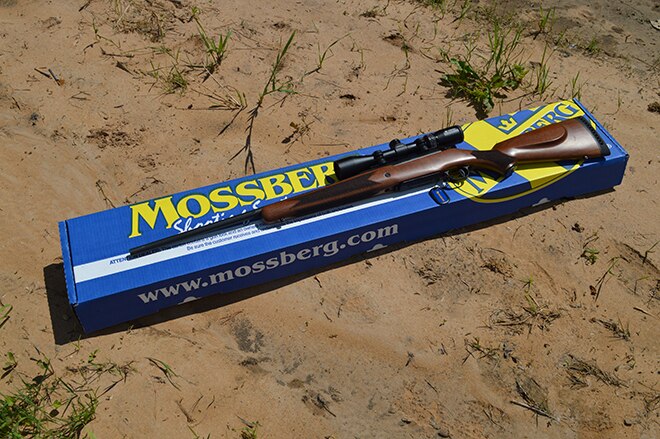 Our test model Mossberg Patriot came as a Walnut Combo in .300 Win Mag.  All of the Patriot combos include a 3-9×40 Vortex Crossfire II riflescope mounted and boresighted.  The dropbox, Mossberg-branded synthetic mag holds 4 round of Win Mag and each round seats with an audible click. Weighing in right at eight pounds with the optic, the rifle felt light, balanced, and seemed it would be easy to carry for a full day of intense hunting. 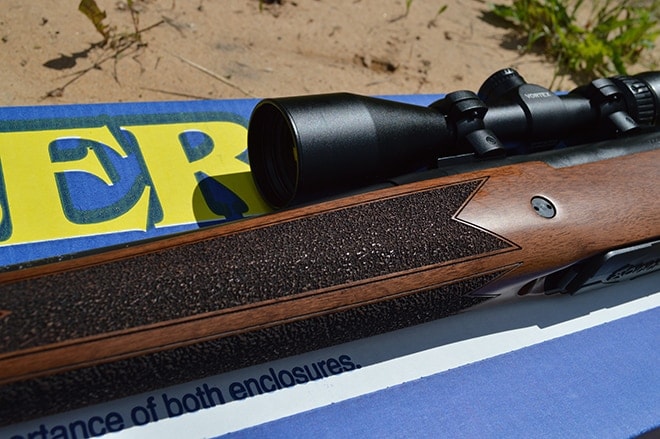 Instead of standard stamped or cut checkering, Mossberg opted for a stippled pattern that both gives the gun a unique look and provides impressive hold, even in adverse conditions.  The walnut stock was of above-average quality given the price of the rifle and had nice wood-to-metal joinery.

Our test gun’s LBA trigger came set just a hair under four pounds and was as clean and creep free as similar competitive triggers on the market.  A recessed crown helps protect the muzzle and is further evidence that this rifle is built to be used, abused, and stand up to it. 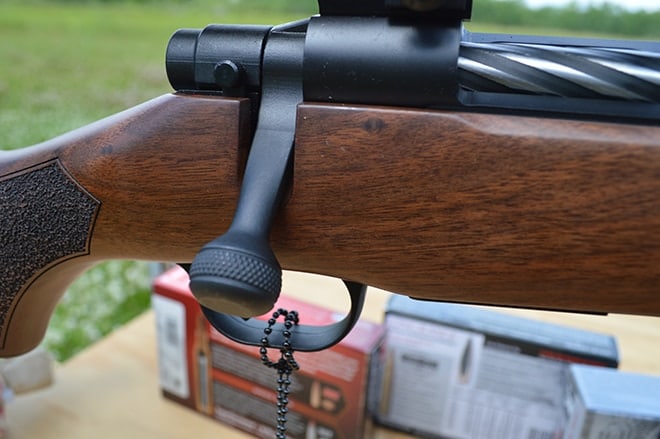 The knurled band on the bolt handle gives extra purchase when follow up shots are needed, and the spiralized bolt moves more smoothly than many guns we’ve tested of much higher dollar.  Function meets form on the Patriot, as the fluted barrel and spiral bolt grant fantastic cosmetic flare, shave weight, and set the gun apart from the competition in aesthetics.  MSRP on our gun as it came is $538. 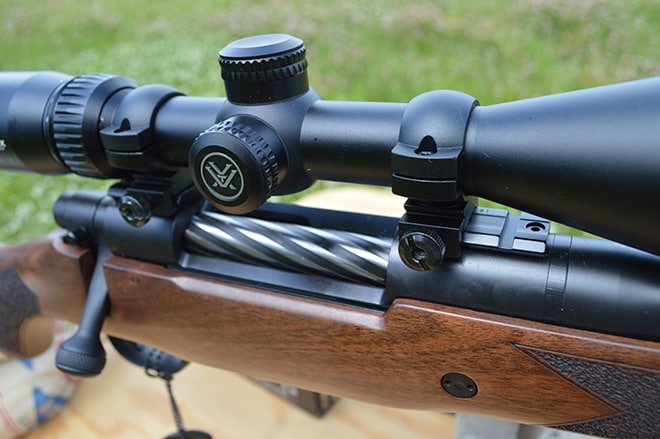 We shot a great mix of premium ammo from Nosler, Hornady, and Winchester with bullet weights from 150 grain whitetail specific offerings to 190 and 200 grain premium big game medicine.  The Patriot fired them all accurately in our tests to the 250 yard range.  On one of our first targets and with the gun just out of the box, we shot from a front bag rest with Hornady’s new Precision Hunter 200 grain ELDx for a group that could be covered by a large dollar coin. 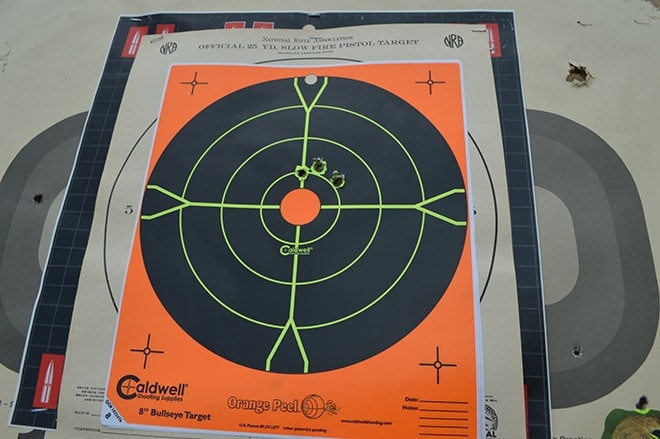 100 yard target right out of the box. (Photo: Kristin Alberts)

The groups only improved from there.  The 1:10 twist barrel stabilized all the bullets well, with the tightest group well under an inch coming from the Nosler’s Trophy Grade Long Range Accubond 190’s at 100 yards.

Aside from the expected point-of-impact changes given the varying bullet weights, the rifle grouped as well—and most often better—than other comparable entry-level rifles we’ve fired.  The included Vortex Crossfire II required only minimal elevation adjustments out of the box and its BDC reticle was a plus.  Through the Crossfire II is Vortex’s entry level optic, their no-questions-asked lifetime guarantee makes this combo especially hard to beat. 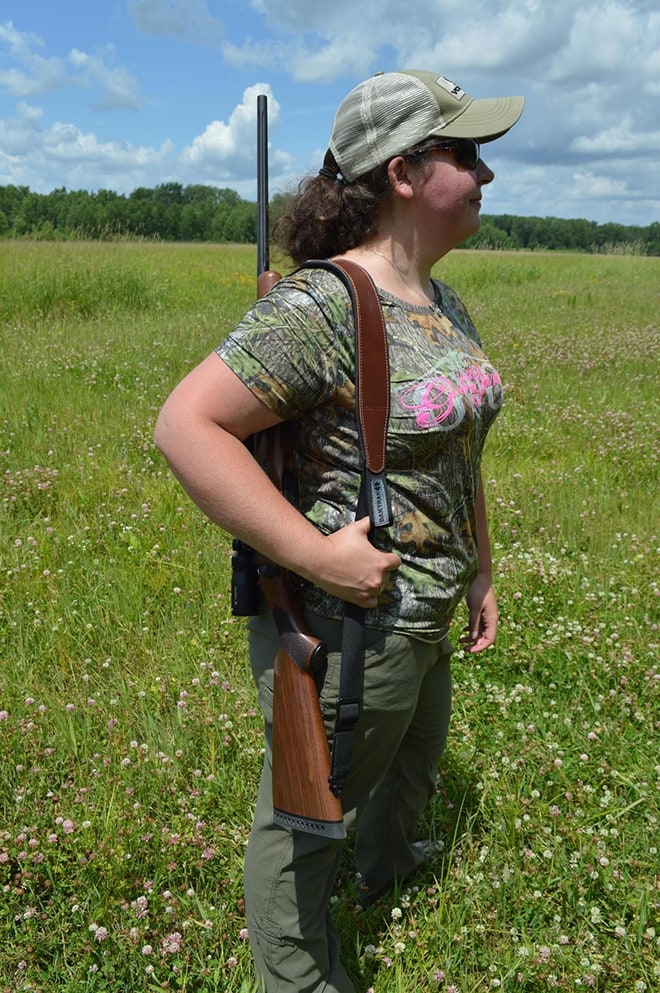 In the field with the Baktrak and Mossberg Patriot. (Photo: Kristin Alberts)

Recoil was stout but manageable, and the combo held zero through 120+ rounds of .300 Win Mag and not-so-gentle handling.

The worst is not so bad

It’s difficult to find a gripe with the Patriot family, but the best we can wish is that there were additional barrel lengths available in some of the calibers.  A 22” barrel is on the shorter side for wringing out the full potential from calibers like our .300 Win Mag.  Nitpicking velocities aside, the Patriot is intended to be a hardcore hunting companion, and as such, it puts rounds right on target at all the expected ranges.

Though not all Mossberg firearms are American-made, Patriot rifles are pure-USA.  Price and options make the Patriot an easily-accessible gun for new shooters entering the market while also satisfying experienced hunters seeking a gun they don’t have to be afraid to hunt hard with in adverse conditions. 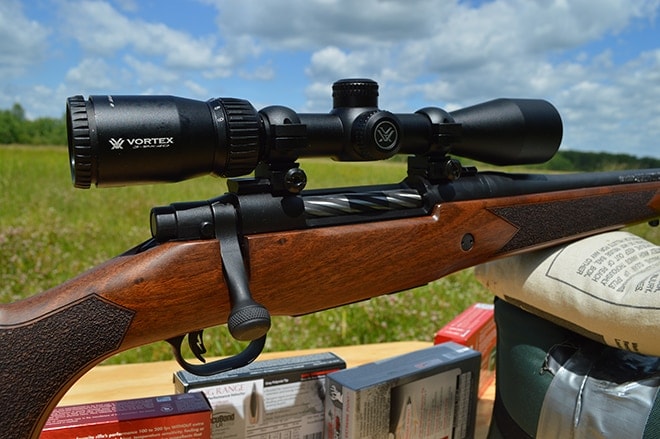 The Patriot walnut combo is a classy looking rifle especially given the price. (Photo: Kristin Alberts)

According to Mossberg, the Patriot is so named because it is intended to be on the forefront of a new revolution in what’s included on entry-level rifles.  After much range time and field testing, we have to agree.  The Patriot rifle has every feature a hunter could want, is far more than minute-of-deer-heart accurate right out of the box, and is priced to beat the heck out of the competition.  All the bells, whistles, and good looks are waiting inside those bright blue and yellow Mossberg Patriot boxes, with field function and durability to boot in an American-made platform.  Some things are too good to be true, but the Mossberg Patriot Walnut is not one of them.