North American Arms makes a handsome selection of small semi-auto pistols, but they are perhaps best known for their series of mini-revolvers in a variety of different .22-caliber cartridges.

The Black Widow has a large rubber grip, larger than most of the NAA minis, making it much easier to shoot, a two-inch barrel, adjustable sights and, of course, it’s chambered in .17 HMR. 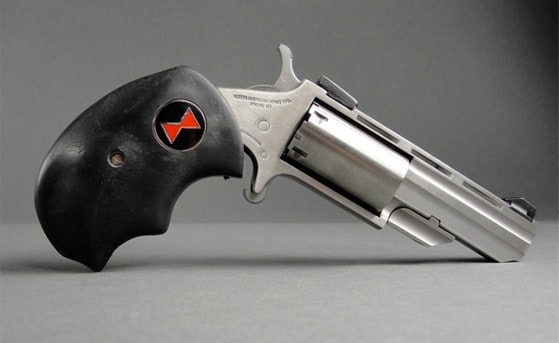 The .17 HMR was a cartridge developed early this century and was based on a .22 Magnum. The advantages it offers over either a .22 LR or the .22 Magnum are a higher velocity (almost twice as fast as a standard .22 LR), a flatter trajectory and longer range.

Somewhat counter-intuitively, it is also less subject to cross winds, even though the mass of the .17 HMR bullet is usually much less than either a .22 LR or a .22 Magnum. This is because while the bullet is smaller, the ballistic coefficient (basically, how well the bullet moves through the air) is much more favorable. For all these reasons the .17 HMR has quickly found a solid fan base with target shooters as well as those who hunt small game.

So it was only natural that some gun manufacturers would see whether there was a demand for a .17 HMR handgun. North American Arms was one of the first to offer such a gun—the Black Widow.

The Black Widow isn’t really designed for concealed carry, though it is certainly small enough to suit that purpose. The adjustable sights and heavier vented barrel, combined with the oversized rubber grips, make it less suitable for concealed carry than other models offered by NAA. It is, however, intended for target and sport shooting.

All the NAA revolvers I have seen or shot are very well made and the Black Widow is no different. They have a solid stainless steel construction and NAA uses high-quality components for all other parts. In turn the fit and finish is quite good.

There is really nothing shoddy about them, but if there were NAA has a solid reputation for standing behind their guns if there is a problem. 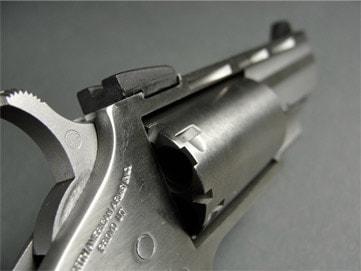 Unfortunately, the Black Widow did have problems. Problems, however, that were actually a cause for concern for the company and ultimately they had to discontinue the model.

I was shooting polymer-tipped bullets and the gun shot well—surprisingly accurate, too, at seven yards—but easily half of the rounds ‘keyholed,’ meaning that they tumbled through the air and would strike the paper target sideways. In other words, the advantages offered by the .17 HMR cartridge were lost in at least half the shots fired.

If a bullet tumbles, it is unstable in the air, so accuracy will be quickly lost as will velocity. Chances are, none of the rounds fired were actually stable, but happened to just hit the paper when they were aligned properly.

This was a common problem with this model and may have been due to the very short barrel. There were also reports that there were problems encountered with the necked-down cartridge case causing jamming which would stop the cylinder from turning.

While the gun was well made and pleasant enough to shoot for this outing, I cannot recommend that you pick one up if you come across it at a great price. Leastwise, not unless you understand the potential problems and that is a factor in what you consider to be a great price. Like my buddy who owns the little gun, you would probably only buy it out of sheer curiosity and only shoot it for grins and giggles.