I’ve been in the firearms industry for a long time now, and I’d never come across a North American Arms mini-revolver in the wild. I’d seen them in stores, and at shows, and I’d asked the folks at NAA to send them for reviews, but nothing ever arrived.

So when my father-in-law started asking questions about them, I knew I’d have to come up with—better answers than my typical educated guesses. So I headed down to the old brick-and-mortar gun shop and tried to buy one.

I say “tried” because these suckers don’t stick around long. There is a certain crowd—and I’m going to guess here that most of them are white males over the age of 60—who can’t get enough of the mini-revolver. I had to order one.

And then there was the run on guns following the shooting in Orlando, so… hurry up and wait. But here it is at last. 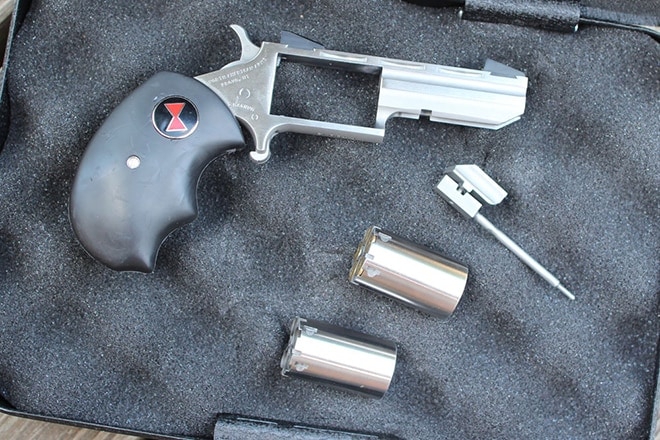 The mini-revolver phenomenon is fascinating. There are many people carrying them who believe these guns are a solid option for self-defense. I’m not in that camp. I see this as a last-ditch gun, only appropriate for those times when anything bigger is out of the question.

I once read an article about extreme concealed carry. A cop, working undercover, had to hit the beach wearing a speedo. That’s it. Where do you hide a gun, when all you have for concealment is a speedo? Easy—an NAA mini-revolver.

And no, I’m not talking about tucking into a body cavity. This cop hid it in the bottom of a Big-Gulp, covered up with ice-cold Coca Cola.

That’s what a gun like this is perfect for. 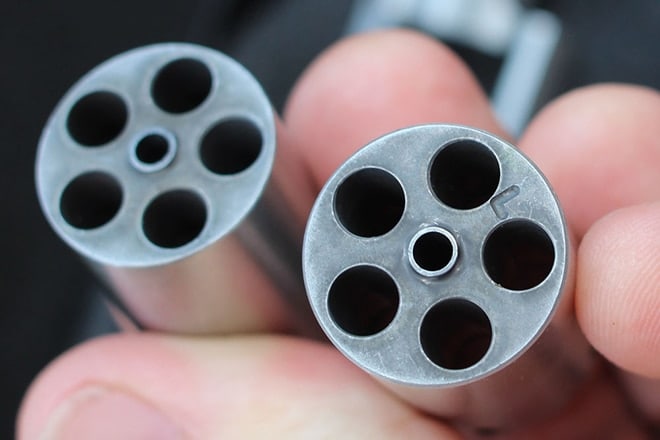 But self-defense? Only if it is the only option available. And then, preferably, in the .22 magnum.  Even then, I’d want to be too close.

Let’s talk basics. These NAA guns are small. The .22 LR only guns are even smaller. We’re talking one-finger grips on most though the Black Widow has a “fat”, two finger, rubber grip. There’s still hardly room for your second hand. With a two inch barrel, overall length of 5.88-inches and a weight of just 8.9 oz, it’s a five shot affair.

Recoil is negligible, even with the .22 magnums. The gun is single-action-only, so you will have to thumb back the hammer for each shot. 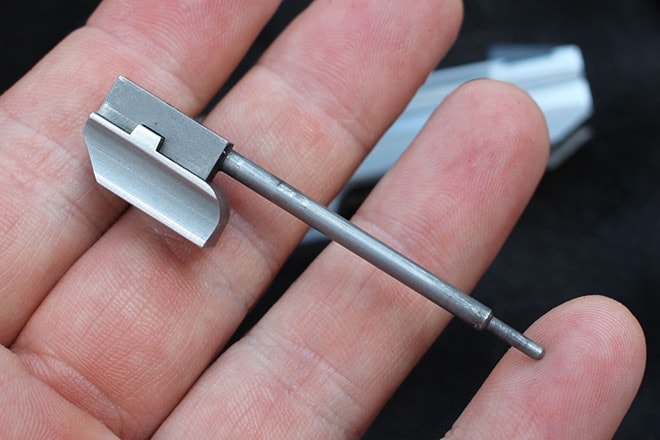 Reloading is a pain in the ass—you have to pull the cylinder. The pin that holds it in place is also the plunger for extracting the shells, which won’t fall free, as the spent magnum brass actually holds in very tightly.

Putting the cylinder back in requires a bit of fidgety monkey business. I found that I could drop the cylinder from the left side of the gun, and put it back from the right side. Even when it goes back into place, you have to find the perfect placement for the pin. It isn’t difficult, but it isn’t easy, either. I expected for it to get better with practice, but that hasn’t happened yet. 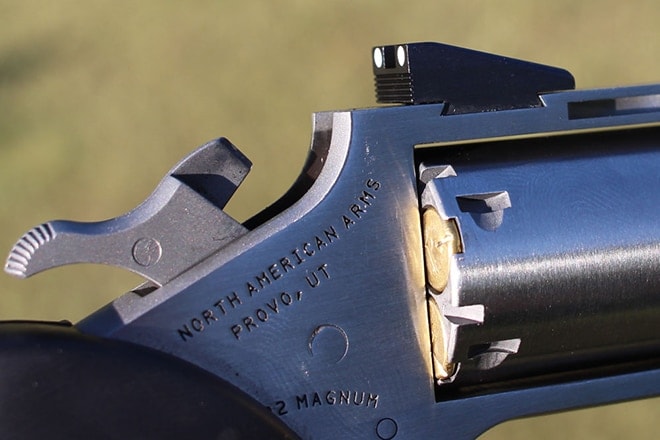 The best way I found to get the cylinder back in is to first pull the hammer back until you feel the first click. If you do this before you put a loaded cylinder in, there’s no chance of anything accidental happening.

Once the gun is set to fire, you are ready to go. There are no external safety devices on the gun but there is a notch for the hammer to rest in when thumbed back a fraction of an inch. That keeps the pin (which is actually a really nice flat wedge) from resting on the shell. 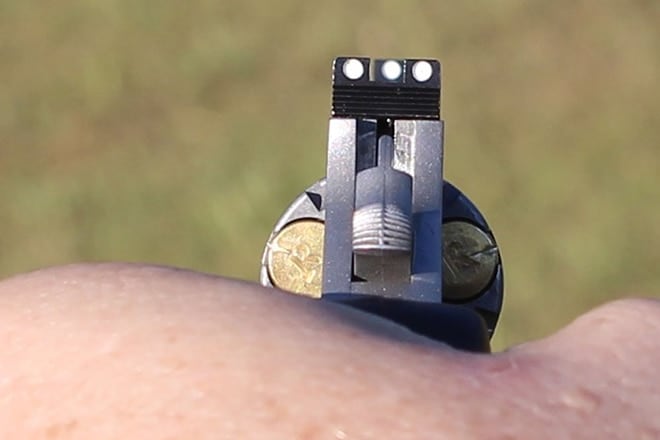 The sights on this gun are superb, if a bit superfluous. I shot from multiple distances. Let’s just say that the closer you are, the easier it is to hit what you’re aiming at. Yet these ramped sights from Marbles are still really nice.

And the whole gun comes in a lock-box. That, I like. Any monkey with a hammer can crack one of these in under a minute—so don’t think of it as a safe—but they keep the kids out. 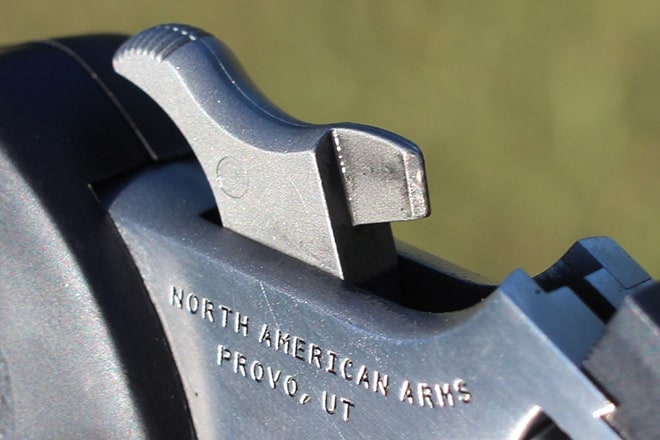 Additionally, this version has a full, un-fluted cylinder. You can tell the difference between the .22 LR and .22 mag cylinders when you try to put the rounds in. And there are small stamps on the back side “l” and “m.”

The barrel is also a fat slab. It is vented, which means they’ve cut out some grooves. It isn’t ported. There are ported versions available, though I can’t imagine why anyone would want ports as it is only going to bleed power from a gun that doesn’t kick anyhow. 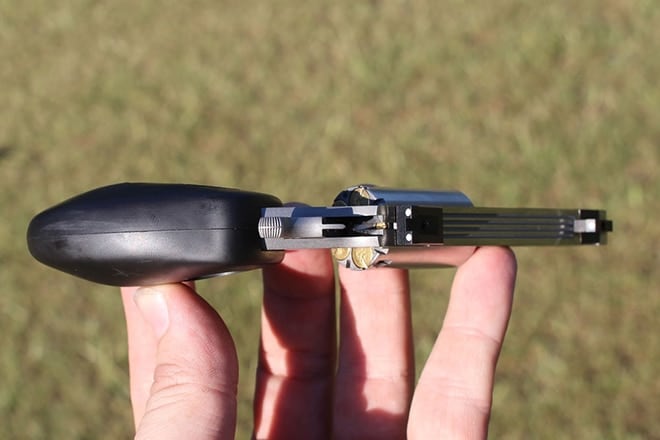 Though only 8.9 oz, recoil from even magnums is negligible. (Photo: David Higginbotham)

As I mentioned before, I’d been told that the magnum shells were going to stand the gun up in my hand. Not the case. This gun is a piece-of-cake to shoot. Unlike some revolvers (some much larger, much more expensive) this one seals up nicely. There was no burn from the gasses leaking out of the cylinder gap. I didn’t end up with burnt powder and shaved lead in my face when I fired from the hip. The NAA is an exceptionally well built gun.

The trigger however will take some acclimation. It feels “like a trigger”, but there’s no take up and I find it hard to pull or not pull my shots. As you can see on these target images, I was all over the map. Shooting one handed, I tended to pull up and left a good two inches. With two hands, and lots of concentration, I could keep it centered. 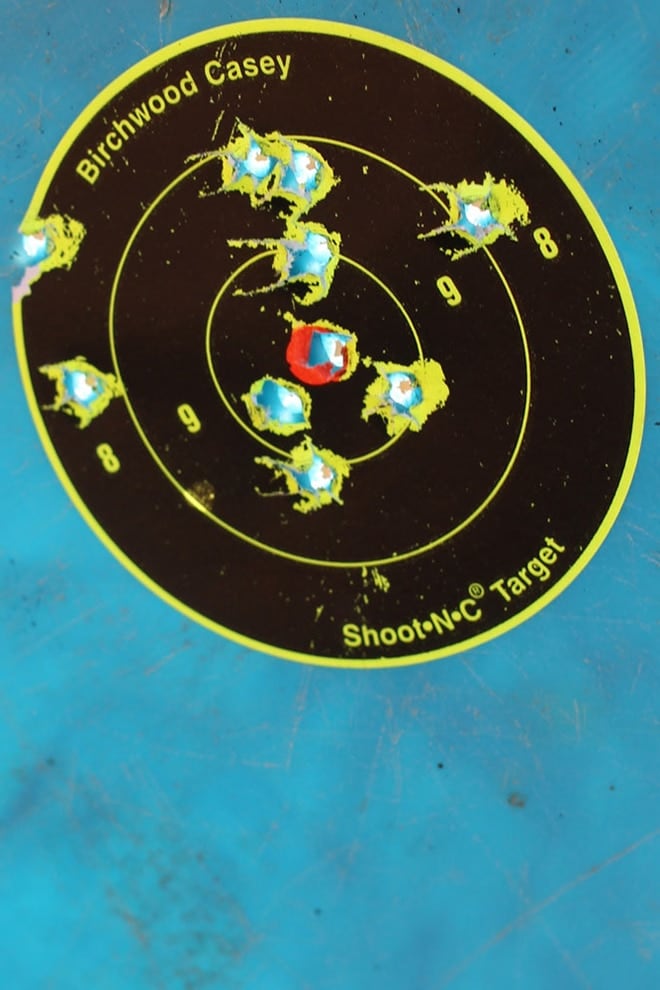 I shot at various distances and can report that this is a close range weapon. (Photo: David Higginbotham)

I shot at contact distances and from distances ranging from three to ten feet. I backed out to five yards. Ten to fifteen yards was still doable, but the farther from the target I got, the more the gun felt like a novelty.

And it isn’t a novelty, exactly. The barrel on this version is two inches long and that’s a revolver measurement, which means it would be closer to three inches if the gun was a semi-auto.  There’s some bleed off from the cylinder gap, but it is minimal.  From this length, the .22 LR can range from 700 FPS to high 900 FPS. The magnum will zip out between 1,300 FPS down to the 1,000 FPS—all depending on the powder load and grain weight of the bullet.  The .22 magnums are certainly nothing to sneeze at.

As there are a wide variety of .22 LRs available now, and fewer (but still plenty) of the .22 mags on the shelves, I think it’s safe to say that the right load for this gunb is readily available.

What’s wrong with the design? 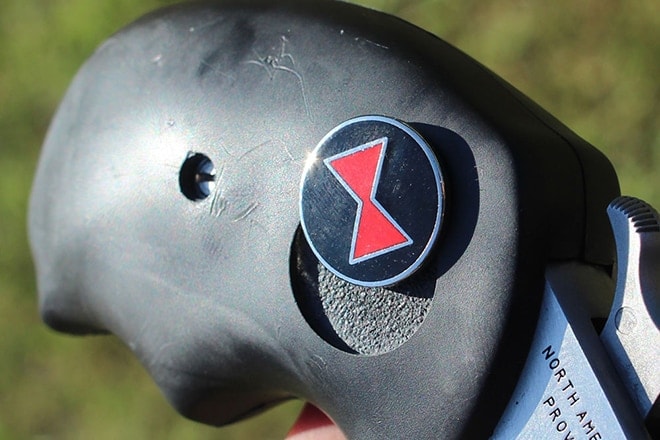 The NAA mini-revolvers don’t have an external safety. This means there’s nothing to prevent them from working like they should, when they should. It also means there is a potential for an accidental or negligent discharge as some folks will inevitably drop them in their pockets with no holster. That, I would say, is user error.

Imagine a scenario like this: You’re carrying in your front pocket, strong side, and you drop your keys in with your gun (I can’t tell you how many times I’ve done this before, though always with my gun secured). Then you forget and wrestle your keys out of your pocket. If the gun is not properly secured with a holster, you could thumb back the hammer. I know it is highly unlikely—so save it.  All I’m saying is that it’s possible. 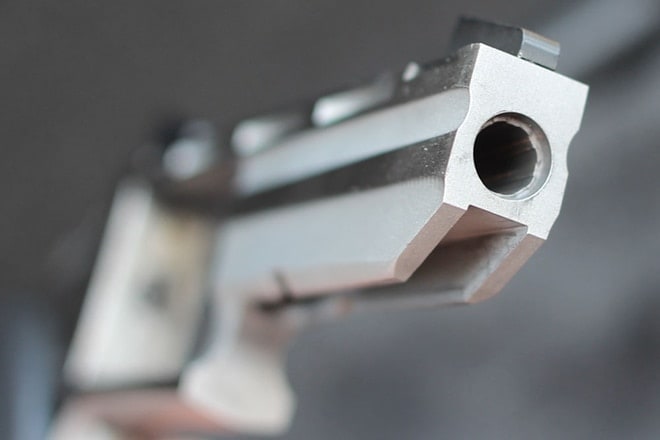 Yet people are always going to find a way to hurt themselves and the gun was built this way for a good reason. My advice is to just use your head and carry safely, in a holster.

The second point has me a bit more concerned. In order to rock in a new cylinder—one that is loaded—you have to manipulate the gun, maybe too much. As the pin slides in below the barrel, I found my fat hands fumbling dangerously close to the muzzle. Frequently. 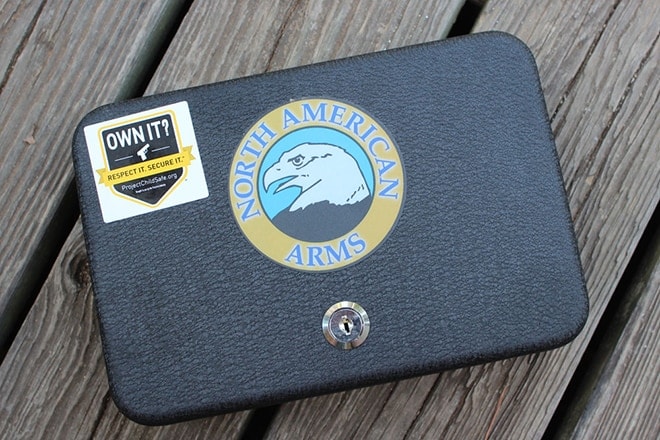 While my right hand was setting the hammer, my left aligned the cylinder. Each time, I wondered just how much pressure I’d have to put on the hammer to get it to fall and ignite a primer. I also tried to be conscious of the trigger—but that was hard as my hands are big, the gun is small, and there’s not trigger guard. Getting everything lined up and positioned correctly isn’t easy, and it is made more difficult if you—like me—are supersized. Again, I’m ragging on a system that is built this way on purpose. It has to be small, so it is small. And it isn’t exactly unsafe—it just makes those of us paranoid about handling guns safely a bit nervous.

In short, I’d really like to have this gun, but with a crane to swing out the cylinder. As is, you have five shots. That’s it. If you are ever in a situation that would require you to use a mini-revolver in a defensive situation, you won’t be able to reload. It simply isn’t practical.

So in the end, what is this thing? 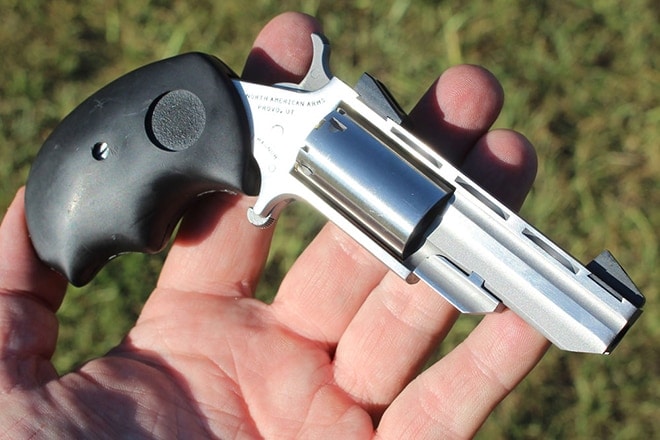 I’m a bit torn. While it will never be an everyday carry piece for me, I will carry it. I just have to find the right holster for it. There are times and places where I need the slim profile of a piece like this. I’ll take off the fat grip, too, and try it with something slimmer.

While this gun feels small and underpowered, it is a gun. Sometimes that alone is enough. I have to keep telling myself that. These things are exceptionally well made. They’re made in America. And they’re inexpensive (just over $300 for the Black Widow, with all the bells and whistles and both cylinders). And they’re small. When I look at that list, I have a hard time chalking the NAA up as a novelty.