Pietta of Italy is known for making reproductions of a variety of cowboy action guns, but a few years ago they came out with something with a wider market appeal: a .22 LR based on the design of the classic Soviet PPSh-41 from World War II called the Puma PPS .22 LR.

BallisticsByTheInch.com was able to borrow an almost-new one of these for the .22 tests last summer. And as far as similarities between the two, the Pietta Puma PPS has the wooden stock, long heat shield covering the majority of the barrel, and even had a 50-round drum magazine. As you can imagine the replica looked just as mean, but then we started the tests. 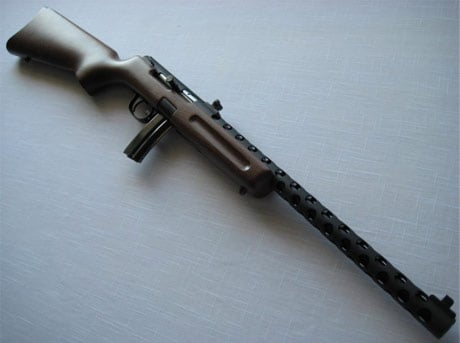 And although it looked really cool, there was something wrong with the drum magazine. Basically, we couldn’t get the rifle to load properly with the magazine. And since we didn’t have one of the stick magazines (both 10 round and 30 round ones are available) on hand, we had to resort to dropping in single cartridges in order to do our testing.

Besides the faulty magazine, I found the gun to function well overall even though there were some problems with light strikes to the cartridges. At the time we figured this was likely due to the gun being fairly unused and needing a break-in period (a not-uncommon problem with .22s). I was able to confirm my theory online that this is a known minor problem with these guns when they are new. The issue usually resolves itself after a couple hundred rounds and a thorough cleaning.

The wood stock was quite good and comfortable. In fact, all the fit and finish was good to excellent. The bluing was attractive, all the parts mated up well and the operation was solid.

The trigger was smooth and crisp, and was set fairly light from the factory. The safety is located on the right side, behind the bolt, in a convenient location for use with the thumb of your right hand and felt very definite in use.

The sights are simple but good with the rear adjustable and a fixed front blade. With them, accuracy out to 25 yards was excellent and it was easy to get a two-inch group even with the hassle of having to chamber each individual round by hand. 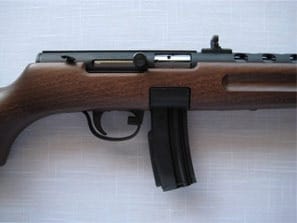 Again, just about everything on the gun worked well except, of course, for the magazine. I’m sure that with a functioning magazine you could do as well or better out to 50 yards with the iron sights.

Shooting the gun actually felt very much like shooting a 10/22 carbine. There was little recoil, the ergonomics were quite good, and it would be a fine gun for plinking all day. Also, the extra weight of the barrel shroud isn’t too noticeable and didn’t present any problems to aiming.

In good used condition, these guns usually go for $400 to $500, which is twice or more what a similar condition basic 10/22 would go for. But if you like the look of the PPSh-41 and are willing to spend a little time (if necessary) to get your Pietta Puma broken in and functioning smoothly, I’d say this would be a pretty good little gun to have. Certainly, if you see one at your local gun shop or at a show, take a moment to look it over just for fun.