I wasn’t familiar with the Radom P64 handgun prior to getting one for testing of the 9mm Makarov cartridge (9x18mm) for Ballistics By The Inch a couple of years ago. But I did know of their existence.

Radom P64 pistols are of Polish design and manufacture, and were imported into the U.S. market a few years ago. At the time, they were mostly about 35- to 40-year-old lightly used handguns, but were sold through various outlets for between $150 and $250. The one the BBTI crew had for ballistics testing of the 9mm Makarov cartridge was part of this batch. 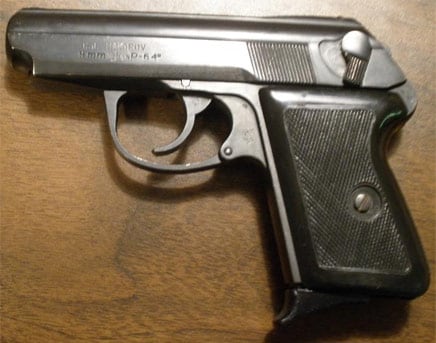 The Radom P64 is a double and single action, blowback-operated semi-automatic pistol somewhat similar in size and design to the Walther PPK, but fires the slightly more powerful 9mm Makarov cartridge.

The one tested, though a bit aged, was in good condition as it mostly just showed a little holster wear. It didn’t look like it had been fired much either.

Its fit and finish were good, but not spectacular. The bluing on the gun was still in good condition, but showed a little wear around the edges. The plastic grips looked almost new.

The gun is equipped with a manual safety on the slide above the left grip, the slide will lock back after the last round is fired, the magazine holds six rounds and take-down is simple, as is reassembly.

Ergonomically, the P64 was a little small for my very large hands, but it felt solid. At 22 ounces, it is heavier than most of the .380s on the market that serve as pocket pistols, so it was surprising to me just how bad the recoil was. Seriously, I wasn’t expecting it to be so severe, but the force of it seemed to concentrate in a very unpleasant way into the web of my hand.

After trying the gun, I perused the forums and whatnot and found that recoil is a common complaint about the P64. To remedy it, many owners replace the standard recoil spring with a heavier spring, and then add in some variety of after-market grip supplement to help tame the sting. 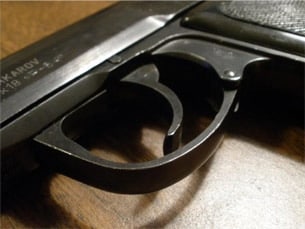 Another well-known criticism is the P64’s very substantial trigger pull in double action (where pulling the trigger both cocks and then fires the gun). This also surprised me when I first shot the gun—it was much harder than almost any other double action gun I had fired.

Also through my research I learned that many owners recommend changing out the trigger spring in order to lessen the pull necessary. Others, however, recommend different strategies like lubricating the trigger group to achieve the same effect.

Counter-intuitively, while the trigger in double action use was extremely hard, it was very light and crisp in single action use (after the first shot the gun is cocked).

The sights on the P64 are basic and not adjustable, but the gun is quite accurate. It was easy to maintain a three-inch group at about 10 yards and others have reported similar groups out to 50 yards using a rest.

All in all, I was impressed with the P64. Particularly knowing that the biggest problems with the guns can be mediated with some minor changes such as new springs and a grip change, and given what these guns were selling for a couple of years ago, I would say that this would be a good choice for someone who is looking for a dependable, effective and reasonably priced self-defense gun.