The Remington 870 is a solid shotgun.  In fact, I think it’s safe to say that the editorial staff of Guns.com has a bit of a soft spot for the hard working scatter-gun.  And there’s nothing at all wrong with a standard Remington 870 Tactical.

There are options for those who want to improve the design.  Or you go straight for perfection, which may well be the Remington 870 Express Tactical Magpul.

At the risk of blurring brand identities, I’m going to refer to this beast as the Magpul 870.  In doing so, I’m not dismissing the role of Remington, but acknowledging what makes the gun different from the other 870s.  The biggest, of course, is this amazing Magpul SGA Stock. 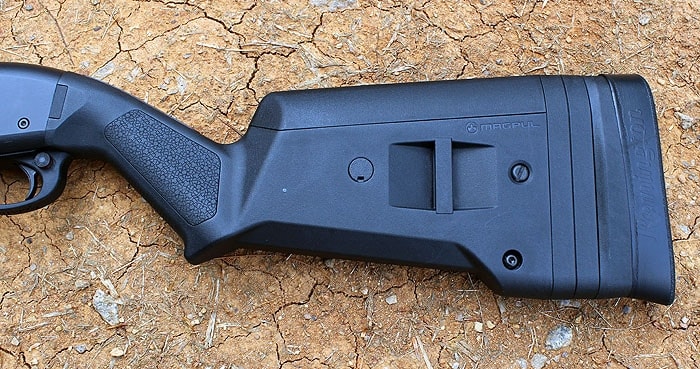 The grip is what makes this for me.  Not quite a pistol grip, and not the traditional obtuse angled grip of some long guns.  The grip fills the hand nicely, and points exceptionally well.  Magpul has built in multiple sling attachment points, and has engineered a spacer system that will allow users to customize the length of pull.  The stock even has a riser that can be attached for those of you wanting to run the 870 with an optic that sits higher than the irons.  In short, this is the most functional, customizable shotgun stock I’ve ever used.  The only things it doesn’t do is fold up or collapse.

The forend is less dramatic.  It isn’t as textured as it could be, but it has nice protrusions that act as stops for the hand.  It is less round than most slides.  Instead, it has a triangular feel that is more ergonomic.  And it is relatively long, which makes moving on and off easy.  You won’t have to take your eyes off the target to get a hand on the slide.

The sights are worth talking about.  Good ghost ring sights are a real asset on a tactical shotgun.  These are made by XS Sights, and are superb.  The rear is dovetailed into the picatinny rail, which keeps the rail from blocking them, and still allows for typical picatinny options. At the other end of the barrel, the front sight is a more typical blade with a white dot. 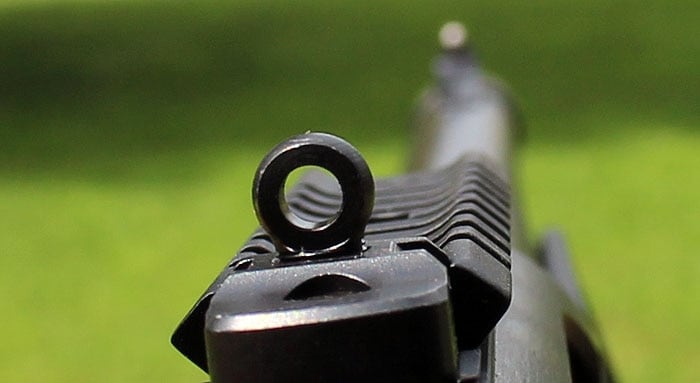 The barrel is capped off with a solid muzzle break.  The perforated steel break has prominent teeth for getting a good bite on a wooden door or a brass lock.  And it looks very aggressive.  The gun is Cerakoted nicely for an added dimension of protection. 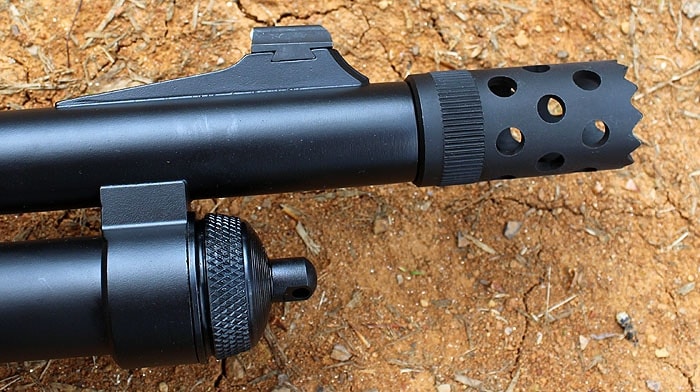 Underneath all of that is the time tested receiver.  If, like me, you grew up shooting Mossbergs, you may find the forward placement of the slide release to be a bit perplexing.  But that’s nothing a little practice won’t fix. 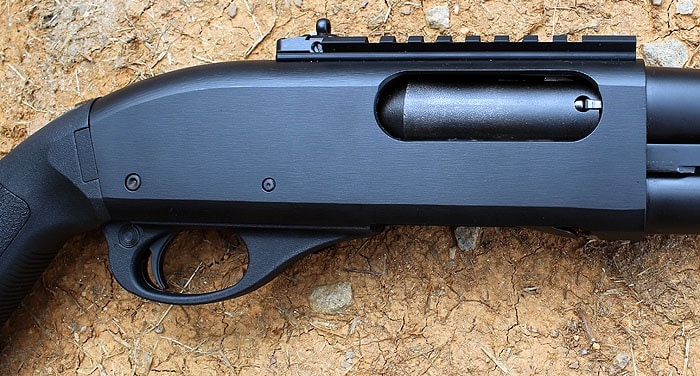 Empty, the shotgun weighs in at seven and a half pounds.  The barrel is eighteen and a half inches long.  The one piece magazine tube holds five, depending on the length of the shells.  I’m still left wondering why it isn’t a full length tube, but I suspect Remington has some rational for limiting the number of rounds the gun can carry in its stock configuration.  But can we call a shotgun tactical if it only holds five shells?

Underneath all of the Cerakote and Magpul is a trusty Remington 870 receiver.  Like most pump guns, this one is heavy (especially when loaded up).  And it is long.  But the length and weight will be very familiar to anyone who has ever run a similar sized gun.  These are the industry standards. 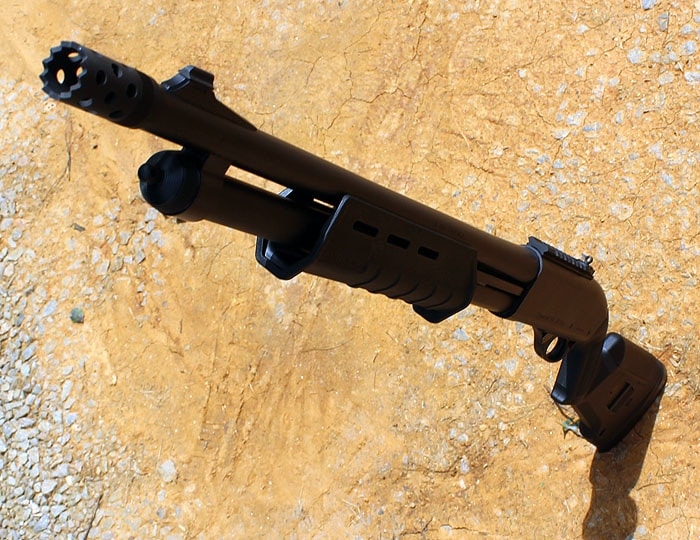 The 870 kicks.  With three-inch brass, it will push back hard.  Leaning in helps, and getting a solid grip on the forend will help hold down muzzle rise.  That grip is also part of a speedy slide pull.  As soon as the trigger is falls, the slide is released and the tension used to hold down the muzzle rise is converted into the rear movement of the slide.  As odd as it seems, wracking the slide is a very fluid movement that doesn’t require much thought.

Like most guns in this price range, there will be some genuine gems and the occasional lemon, but most settle out at a reliable point that has helped make the 870 the standard for the industry.

I will say this.  We had some issues with this particular gun.  Or Jacob did.  With the adjustable spacer system for the stock, we could have made it perfect for me, or for him, but not for both of us.  So we left it in the middle.The length of pull is a bit long for him (and a bit short for me, still).

He was having trouble short stroking.  He’d yank the slide back after a shot.  It would eject fine, but it would hang up before it picked up the next shell.  It happened consistently with Jacob, but not with me.  I could feel it, but I was working the slide harder than he was and not experiencing the failure to feed.

On one of our range days, Jacob had brought his old 870.  It didn’t have any issues at all with short stroking. The slide wouldn’t hang at all going down or up.  His slide is so fluid that if you release it with the gun pointing into the air, it will drop all the way down on its own.  It requires very little effort to eject and chamber the next round. 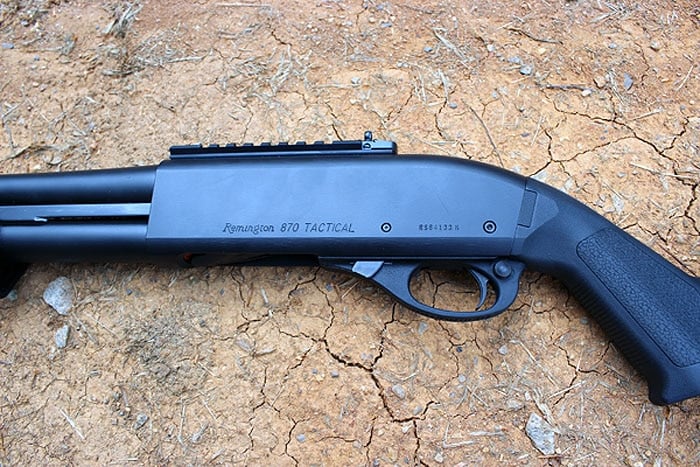 I tend to muscle through the pump motion and didn’t have a problem with it short stroking.  It felt much more stiff than Jacob’s broken in 870, but I think that is the key.  I’m not making excuses for the Magpul 870, but it needs to be broken in.  I had no difficulty making it work, but it could work a bit more smoothly.

And this has nothing to do with Magpul.  Let’s get that out of the way.  It wasn’t the Magpul forend that was causing problems, but something inside the gun.

You can pick up an XS sight and some Magpul extras for your 870.  Or you can buy the complete package.  The 870, in this configuration, sells in the neighborhood of $700.  That looks like a total that is much less than the sum of its various parts.

And I personally think it’s a great place to start.  Why not?  Why not pick up a gun that has many of the changes you’ll be tempted to make already made?