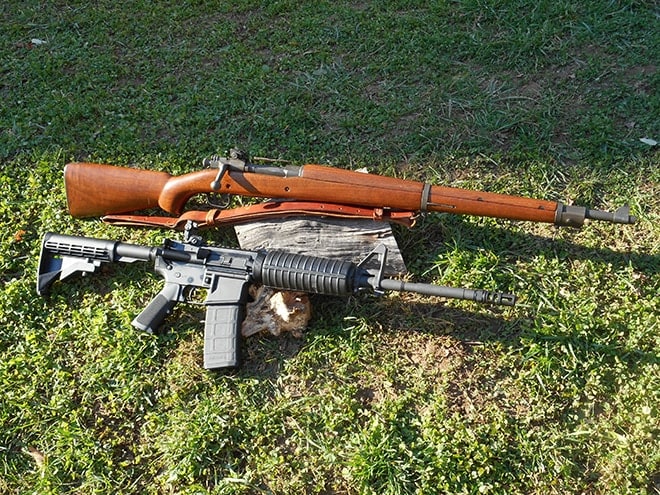 Adopted in 1892 and seeing widespread introduction in 1894, the Krag-Jorgensen is possibly the finest rifle the United States military has ever used. However, it is the rifle design and variants that replaced it, in this review the Remington M1903A3, that I consider to be the nicest looking military bolt action rifle ever.

I know that I am not alone in this thinking.  Question is, is the M1903A3 the best military bolt action rifle available or is it just a case of patriotic bias? 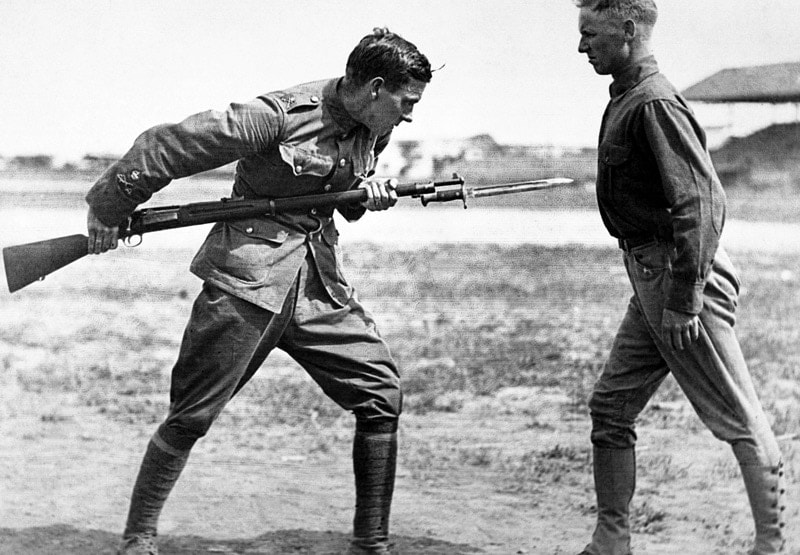 The quality of the fit and finish of a Springfield Krag is unmatched by any other rifle used by the United States. However the Krag’s limitations were apparent after the Spanish-American War where it came up short against the Spanish Modelo 1893 Mauser rifles. The length of the rifle, the cartridge and the speed of reloading all were issues the Army wished to fixed in their next generation of weapons.

Although there were attempts to modernize the Krag, eventually the decision was made to adopt a new short rifle that drew inspiration from the Spanish Mausers.

To simplify production and logistics, a single rifle would be adopted across the entire Army, something that no other nation had done. Revolutionary in the concept of “One rifle to rule them all”, no longer would infantry, cavalry, and artillery have their own variant. Known as the M1903 Springfield, it is often held in high regard by former users. 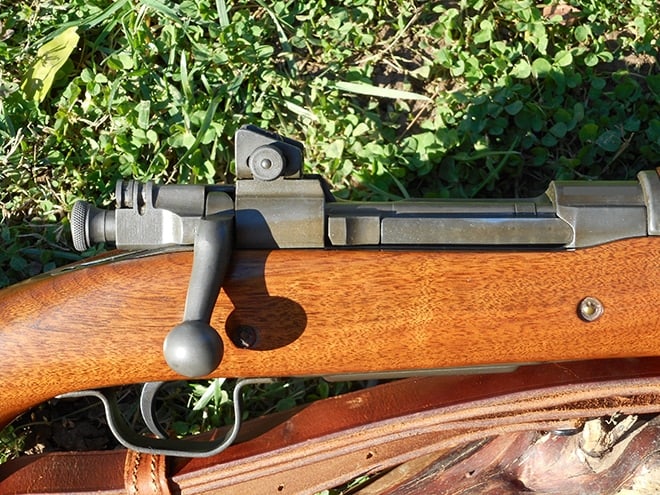 In 1939, with the clouds of war darkening over Europe, the US Army realized that once again they were chronically short of small-arms. Although an evolutionary leap in small-arms technology was available in the form of the M1 Garand, this weapon was expensive and time consuming to manufacture. In consequence Remington was called upon to begin manufacture of the M1903 Springfield rifle as the tooling for the M1903 could not easily be converted to production of the M1.

Using tooling supplied from Springfield and Rock Island, Remington began to produce the M1903 that year. Big Green eventually received approval from the Army to make several changes to the design of the rifle—most importantly, the complex Buffington-style rear sight was replaced with a much simpler aperture sight based off of the M1 Carbine rear sight. The US Army had also begun to switch to a pistol grip style stock (Type-C Stock) from a straight grip after input from the US Army’s National Match team.

The variant reviewed here is the later M1903A3, built by Remington during World War Two when the US military did not have enough M1 Garands to go around. 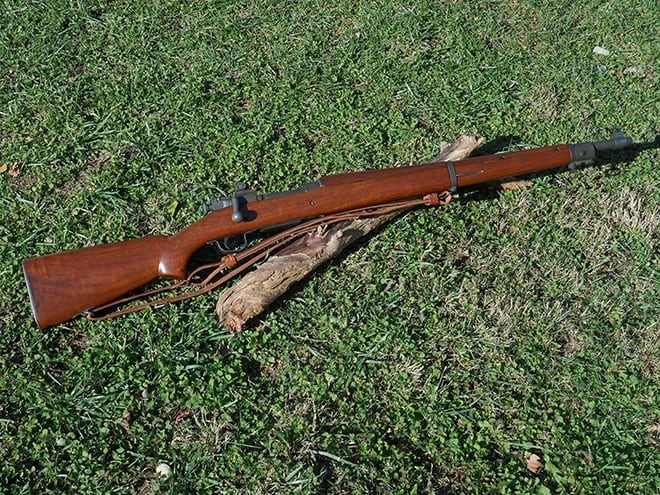 Weighing in at 8.7 lbs, no one can accuse the M1903A3 of being a lightweight. The rifle is balanced much like a well made sporting shotgun however, ensuring that the rifle is not only deceptively lighter, but also points well. When it comes to appearance, the ’03A3 is what I consider to be the nicest looking military bolt action rifle. The Type-C stock, short(ish) length, flush magazine and turned down bolt handle all combine to help give the ’03A3 a wonderful and respectable appearance while doing nothing to hinder the handling and function of the rifle. 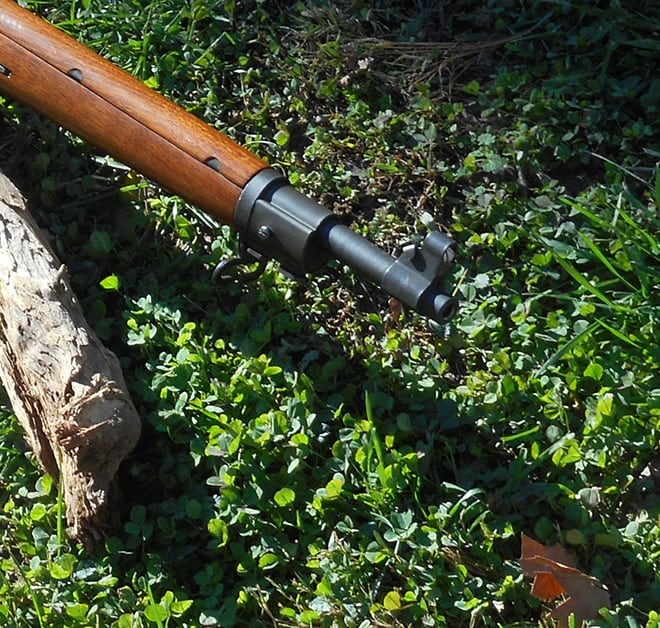 The rifle’s finish is a green-grey parkerized finish, common to all US rifles from the Second World War. The finish on this rifle is smooth, even, and virtually untouched. This leads me to believe the rifle was refurbished after the war by either the US Army or the Director of Civilian Marksmanship, though I have no concrete evidence.

(As a side note, the US refurbished rifles of all models throughout the war. Should you come across a stock with the letters ‘O.G.E.K’ inside of a rectangle, it would be wise of you to purchase that rifle as it has been blessed by the hands of a true god in the firearms world: Elmer Keith. Unfortunately it is unknown to me if my rifle was ever graced by the presence of Mr. Keith.) 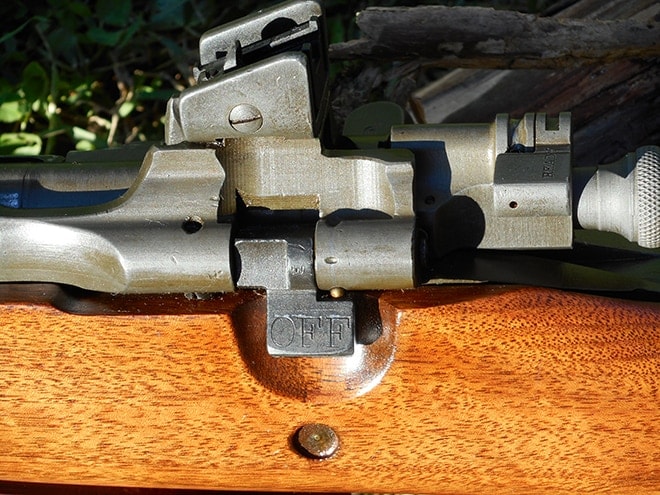 Flip the cutoff to the middle position, and the bolt can be pulled out for cleaning. (Photo: Francis Borek)

One odd feature left over from the 19th Century is the presence of a magazine cutoff. With the cutoff in the ‘OFF’ position, the bolt is prevented from traveling fully rearward and picking up a new cartridge from the magazine. In the ‘ON’ position, the bolt can feed from the magazine. If you are wondering why such an antiquated relic, designed to turn the ’03A3 into the equivalent of the Trapdoor rifle, is present on a rifle made in 1943, it is due to the cutoff acting as the bolt stop. Flip the cutoff to the middle position, and the bolt can be pulled out of the receiver for cleaning.

When it came time to put my ’03A3 through it’s paces on the range for this review, it did not disappoint. 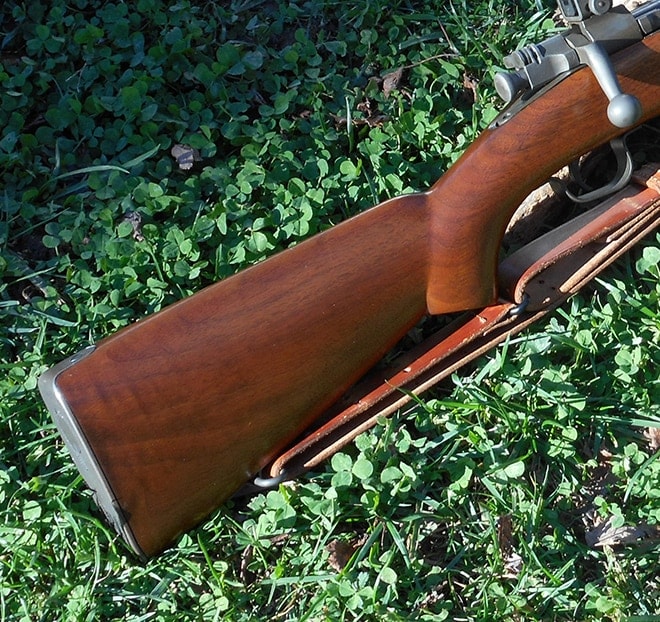 The reproduction stock has a much thicker palm swell than original stocks. (Photo: Francis Borek)

The reproduction stock has a much thicker palm swell than original stocks and it is greatly appreciated. While this ’03A3 has a “War Emergency Barrel” with only two grooves of rifling, the aperture rear sight more than makes up for this. Placed at the rear of the receiver, it is close to the eye and gives an incredibly long sight radius. It is a welcome change of pace for anyone used to shooting surplus rifles with a rear leaf sight placed far forward on the barrel. The trigger is a two-stage affair, with a smidge of take-up and a clean break of around 8 lbs. 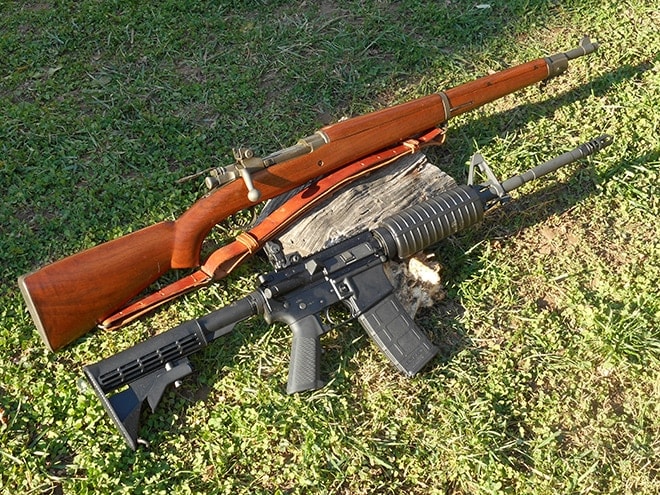 In my opinion, the M1903A3 is the sum of everything that I prefer in a rifle. Good looks, good sights and a good stock all provide a well refined rifle with an amazing history. The .30-06 round is available in a plentiful variety of bullet types and weights and can be obtained at reasonable prices.

While not exactly the best choice for home defense or a WROL rifle, the ’03A3 is certainly not the worst choice for most any application. I find that all other rifles have some sort of compromise, whether it’s the sights, feed system, or rimmed cartridges, but to me the ’03A3 just nails it. In the worlds of a wise old man: This rifle is not as clumsy or random as others, it is an elegant weapon for a far more civilized age.