The Remington Model 1911 R1 Carry is a nice high-end production gun.  It is the latest in a line of Remington 1911s, all of which commemorate Remington’s war time 1911 production and the centennial of John Browning’s design.  The R1 carry takes the basic R1 pattern and adds all of the basic upgrades common to a good duty gun.

Let’s start at the beginning.  The R1 Carry is a full-sized 1911.  It has a five inch barrel, (many were hoping the R1 Carry would have been a Commander length gun).  It is a series 80 gun, which means it has a firing pin block that will help prevent accidental discharges if the gun is dropped with the hammer down on a loaded chamber.

The rest of the gun has been reworked a bit.  The R1 Carry has an upgraded trigger.  The front strap and back strap are checkered nicely, as is the bump on the bottom of the beaver-tailed safety.  The hammer is skeletonized.  And the whole gun is coated in a satin black oxide finish.

All of the edges of the R1 Carry have been rounded just slightly.  It may be most obvious on the rear slide serrations, which are grooved cuts rather than the sharp milled channels that dominate new 1911s.  When coated in the oxide finish, these cuts soften even more.  They provide a decent grip, but aren’t hard on the hand (or likely to snag or tear clothes). 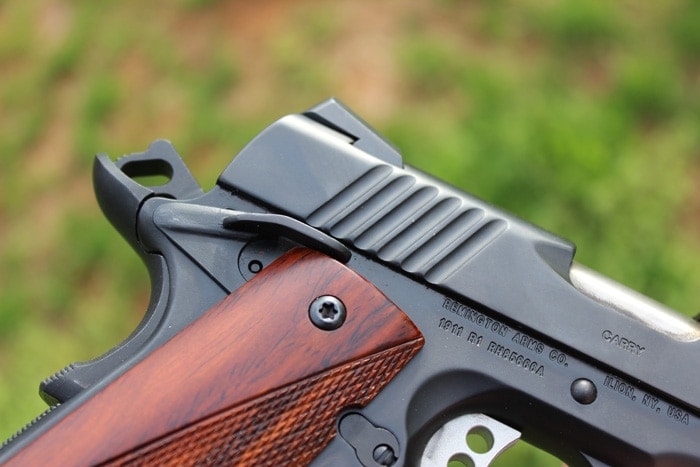 Even the magazines have a slick coating.  They’re steel.  One has a slight bumper on the bottom, and holds eight rounds.  The other is a traditional flat bottomed seven round.  The two different magazine capacities are a good teaching tool.

An example: I’ve developed a bad habit of flinching.  I’ve been shooting pistols with more rounds in their magazines lately, and when I went to review this 1911, I found myself pulling the trigger on an empty gun.  And when I do, I flinch.  I’m tugging down and away.  It is ugly. 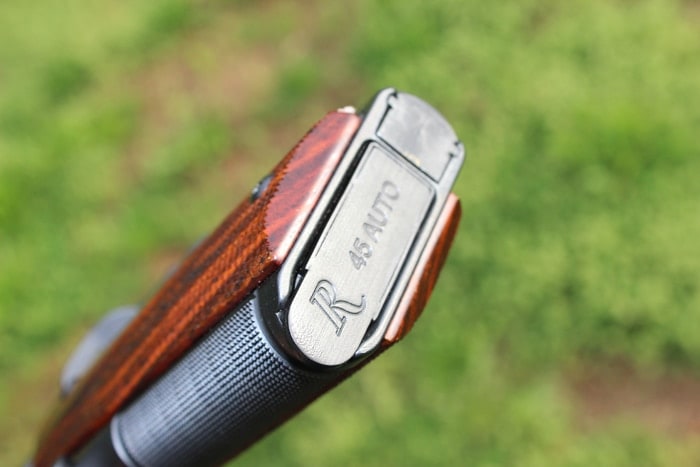 I’m usually capable of counting all the way to seven, but sometimes there was an eighth round.  If your situational awareness is up to par, this won’t be a problem.  But don’t get lazy.  You might have a bonus round in the tube.

Shooting with the R1 Carry

While the sights aren’t made for shooting tight groups, the R1 is capable.  The Novak sights are fast.  And there is nothing that the rear sight might catch on.  The front post is a tritium dot, which really shows up nicely in low light situations. 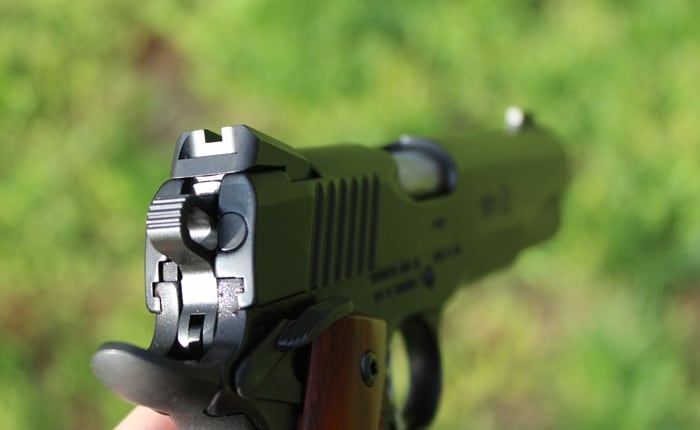 The trigger is adjustable for over-travel, and it breaks around four pounds.  Decent for a carry gun.

The ambidextrous safety means that lefties will have an easier time with the R1, but the magazine release and slide drop are still oriented for the rest of us.

I’m impressed with the way the R1 handles.  It feels like a nice, custom 1911.  The aggressive checkering makes holding it down reasonably easy.  Even with the recoil of the .45 ACP, the R1 is soft shooting.  Even the cocobolo grips are designed right (checkered where grip is needed, and smooth where your thumb needs to move). 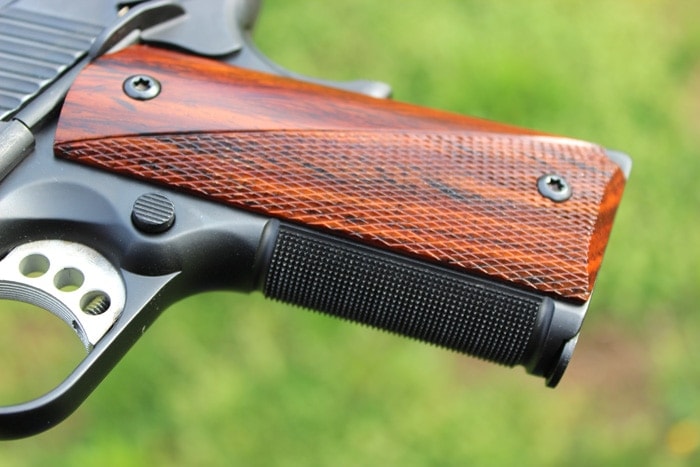 The R1 is more than capable of fine shot placement from close range.  What else would you expect from a 1911?  It is also capable from farther out.  We were shooting from 75 yards in the video above.  We had no difficulty at all hitting the torso sized plate, and the 12 inch plate wasn’t much of a challenge, either.

We put a couple of hundred rounds through the R1 Carry on one range visit.  After 200 rounds, the gun needed a good cleaning.  While we didn’t have any failures to extract, the dirty gun was a bit sticky.  The slide began to catch while chambering the last round.  It would almost slam home, then hang up.  A bump to the back of the slide sent it home.  That was the only issue we encountered at all.

I prefer to carry a 1911 strong-side, in a high-ride holster.  I carry cocked-and-locked.  I’ve gotten comfortable with this over time.  But there are endless options for the R1.  Because it is a series 80 gun, some will carry the gun with a round in the chamber and the hammer down (though I consider this to be way too risky, as you have to slowly drop the hammer to get the gun in this state, and then cock it again before it will fire). 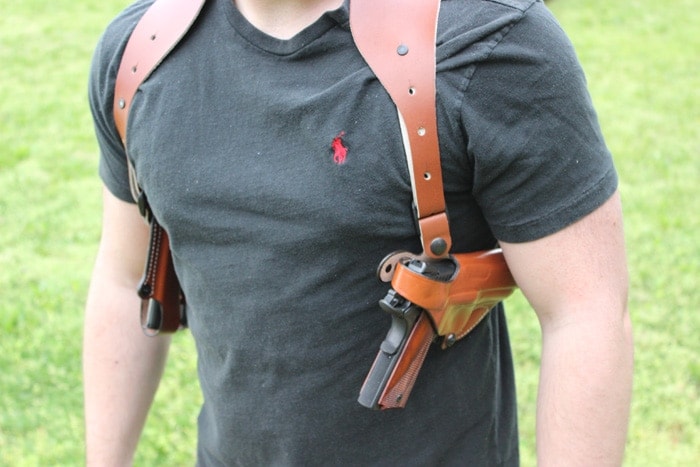 This shoulder rig from Desantis is a nice clean option, and a great way to conceal a full sized gun.   But there are hundreds of holsters available in almost as many different configurations.

After I’d shot the Remington R1, more than a year ago now, I felt an affinity for the gun.  It is a solid 1911.  But I wasn’t such a fan that I had to have one.  The R1 seemed like an excellent nod to the more historical 1911 A1, yet there was enough about the gun that wasn’t historically correct.  The regular R1 would make a great platform for building a custom carry gun. 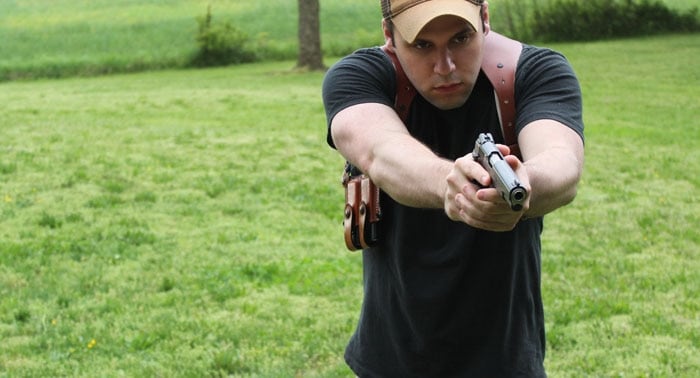 Or, you could just get an R1 Carry, and start from there.  Most of the work is done for you.  In fact, I’m not sure there’s much on this one that I’d want to change.  MSRP on the R1 Carry is $1299.  If the current rush for guns ever subsides, and it again becomes a buyers market, the R1 Carry should settle out just north of 1,000.  But for now, they are going fast.  And for good reason.  This is one functional 1911.