Have you seen one of these yet?  You’d remember if you had.  The Sphinx is one of those guns that makes a positive first impression.  It is the latest pistol from the Swiss engineering firm Sphinx Systems and Kriss.  The Sphinx SDP pistols are made in Switzerland and imported into Virginia.  The gun comes in subcompact, compact and standard sizes (and all three are 9mm guns).

Part of what makes the Sphinx unique is its construction.  The slide and barrel are steel; the top of the frame (everything above the trigger and the grip) is aluminum; the trigger guard and grip are polymer; and all are finished in black (at least on the Alpha model), so the different materials aren’t visibly noticeable. 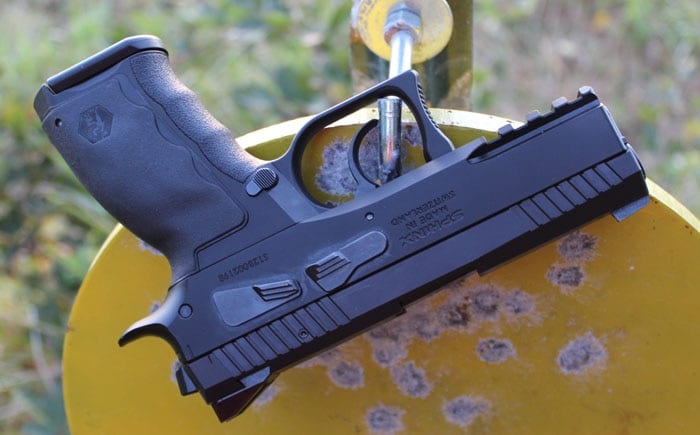 The overall length of the Compact version is 7.48 inches and it’s heavier than your typical compact pistol at 1.69 pounds empty.  The barrel is 3.7 inches, and the sight radius is a generous 5.7 inches.  The rear sight is U-shaped, and serrated on the backside.  Under the business end of the gun is a four-notch Picatinny rail. 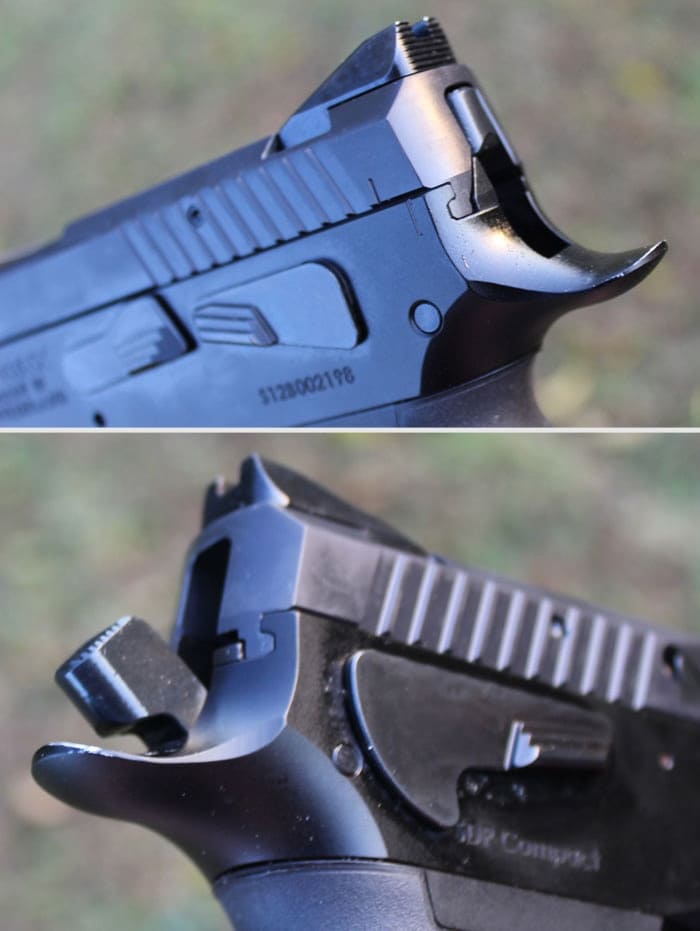 The Sphinx has the large beavertail and a no-snag hammer. It can be set for a double- or single-action pull. (Photo by David Higginbotham)

The pistol grip is molded and has plenty of texture.  The backs, which have a more rubberized feel, are interchangeable for different hand sizes.  Above, a beavertail keeps the slide from catching the web of your hand.  The back end of the Sphinx makes it feel very much like a 1911, which is a comparison I’ll keep coming back to.

The hammer is odd.  The Sphinx has an external hammer with very little external protrusion.  When you pull the trigger, the hammer rocks back.  This is just about the only way to cock the Sphinx without moving the slide.  Once it is in motion, the hammer can be caught with your thumb and cocked the rest of the way, or you can simply fire the gun in double action.

If the hammer is cocked, the ambidextrous safety will drop it to half cock.  From that position, the hammer is easily cocked with either hand without having to touch the trigger.

The trigger pull on the double action is around 10 pounds, and the single-action pull is less than 4 pounds.  The trigger reset is incredibly short, which increases accuracy as you don’t have to shift your grip nearly as much to get the trigger back. 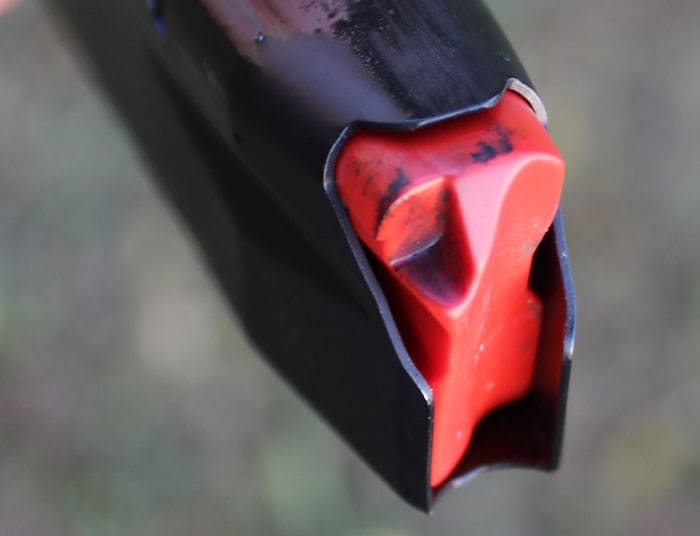 The bright red follower inside the magazine is impossible to miss. (Photo by David Higginbotham)

The magazines are a traditional double stack design and hold 15 rounds.  The followers are bright red, which is an easy to see beacon when the gun locks back.  That flash of red is so much better than a black follower for communicating the condition of the gun, instantaneously.  The magazine catch is reversible, and the magazines drop free.

This is a jumpy gun.  For a 9mm that is this heavy, I expected less muzzle flip.  It took me a couple of magazines to get used to the way it bucked.  Not that the recoil is extreme, it’s comparable to what you would find in a Beretta 92 or even a Glock 19, but it moves and you have to hold on tight for fast repeat shots. The front of the trigger guard has texture for those who wrap a finger around the front. (Photo by David Higginbotham)

The cut out on the front of the trigger guard is there, for those who like to hold it.  The actual grip of the gun couldn’t be any more ergonomic.  It feels very comfortable.  The curve up the back-strap (and into the beaver tail) is ideal for my hand.  And the finger grooves are subtle, but put your hand in exactly the right place.  And it points nicely.

The sights are solid and work well.  These are not target sights.  They’re fast, and offer reasonable accuracy.  That’s what you want from a compact carry gun. 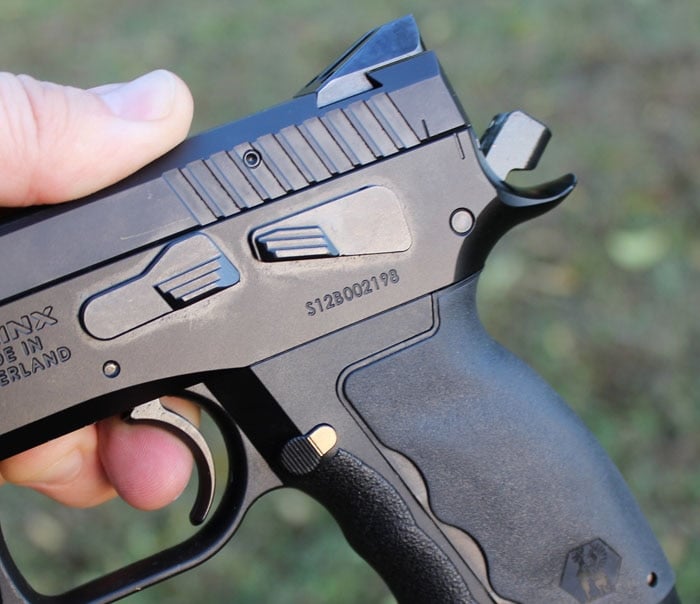 The trigger moves very little before breaking clean at this point in the pull. (Photo by David Higginbotham)

We took the Sphinx to the range on a really hellish day.  While the weather refused to cooperate, the Sphinx was more than a match for the conditions.  No amount of rain could slow it down at all.  We had one failure to extract that pulled on the second attempt.  After putting more than 100 rounds through the Sphinx, we gave it a good coating of mud.  The Sphinx fired fine, and the force of recoil cleared much of the debris from the outside of the gun.  But there were more feeding issues.  Rounds didn’t want to seat fully.

Thankfully, the Sphinx has a nice flat back end.  And the rear sight has a wide, flat profile, and serrations.  There wasn’t a feeding issue that couldn’t be solved with a sharp bump to the rear of the gun with the off hand.  After a quick field strip (in pouring rain), we rinsed the slide and frame and magazine in water collecting in the bed-liner of a pickup, and put it back together.  Problem solved.  The Sphinx ran perfectly.

The extras are what makes it

The sights are solid. Both the rear and front are milled and pinned to the slide. They’re fast and offer reasonable accuracy. (Photo by David Higginbotham)

The extras.  There are lots of extras.  Honestly, I had no idea I’d fond so much minutia to talk about, but I’m really impressed.  Lets start with a closer look at the sights.  The front sight is milled into the frame and then pinned.  The rear sight is also dovetailed and pinned.  The result are sights that you could hammer on if you needed to.  And if you get a failure to feed, you’ll hammer on that rear sight.

The base of the magazine well even has bevels on the outside.  Let’s say you do decide to see how the Sphinx runs when you coat it in Virginia mud, and have a magazine that jams up in the gun, and need to strip it with your free hand.  These indentations allow you to get more of the mag and yank it from the gun.  Most other guns have flush fitting mags that are hard to pull if they get hung up.

Even the fit is impressive.  The Sphinx has forward and rear slide serrations, but it glides on its full length rails.  It feels really smooth.  I compared it to a 1911 earlier.  I should have compared it to a really well made 1911.  Even after a muddy field strip, a bath in rain water, and a few more magazines, the Sphinx’s slide slipped back and forth with a really delightful precision.  Yes mud gummed up the works and slowed down the slide, but that may have more to do with the super tight tolerances on a brand new gun.  I would expect it to loosen some over time.  That said, I recognize quality when I see it, and I rarely see factory pistols that are built to this level of perfection.

I guess you get what you pay for.  With an MSRP that starts at $1,295, it should be this well built.  And the Sphinx is worth it.  I’ve seen some guns that have awe inducing price tags, but the price seems driven by fashion and not anything in the manufacture, materials or design.  But the Sphinx has it all.  And it isn’t trading on its brand name, yet.  At least not over here in the states.  If you see one anywhere near the $1,000 mark, I’d consider it a steal.