Finally.  A gun just for me.

Taurus’s southern cousin, Rossi, has built a radical new design.  They’ve taken the immensely popular .410/.45 Judge platform and built it out.  With an 18.5-inch barrel, and a short, tactical, pistol-grip stock, the revolver turns into a tactical powerhouse.

As the Assistant to the Director of Security at the Green Valley Shopping Promenade Emporium, I have an important role to play in the safety of our patrons and the protection of our vendors’ assets. It is important that my security team stays on the cutting edge of tactical technology.  We have a certain look to maintain, and that look inspires confidence in the shoppers and fear in the juvenile miscreants who loiter here at the mall. 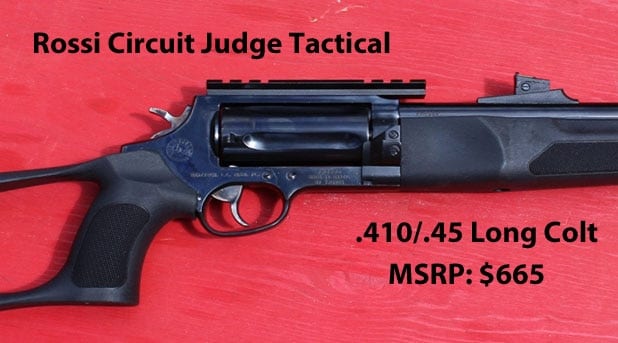 The Tactical Circuit Judge is finished perfectly.  The polymer has a satiny black finish, but the steel is a glossy blued black.  The blue glow of the barrel is just enough to draw attention, which is perfect for the Shopping Emporium, where we like to be seen.

I’ve heard some shooters grouse about the size of the Circuit Judge’s stock and pistol grip.  They just don’t understand what tactical means.  This isn’t some weekend warrior fun-gun.  Serious tactical weaponry is meant to be used with serious tactical gear.  When swapping lead is one of your occupational hazards, you wear body armor.  Simple as that.

The short stock is perfect for use with a bullet-proof-vest.  Some people think Kevlar is overkill here at the Green Valley Shopping Promenade Emporium, but not me.  A lot of the punk-ass wannabes with their pants around their ankles think they’re gangstas.  Why risk it? 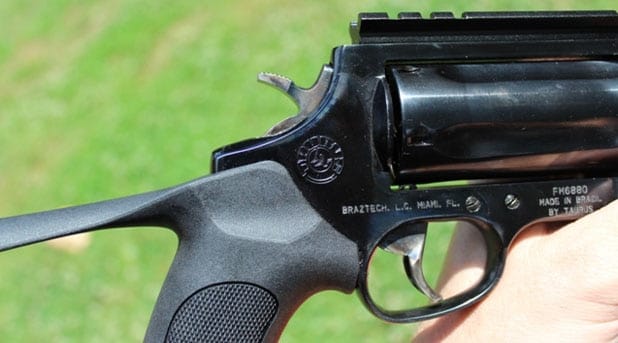 And the pistol grip is perfect for people like me with smaller hands.  If my hands were any bigger, the top of the stock cut-out would keep me from getting a good hold on the grip.  And the recoil would bite down, hard, right into the knuckle of my thumb.

But I love this stock.  It is drilled for 5 additional .410 shells—just in case.  And it has a clear window that shows what’s in the butt—so you’ll never have to panic in the middle of a firefight.  With five in the cylinder and five on hand, the Circuit Judge can dispense the justice.

I had heard rumors that the trigger on the Circuit Judge was slow—that it couldn’t reset fast enough to keep up with the cylinder.  Bogus.  This trigger is a dream.  And you can run the gun in rapid fire double action—for those intense times when seconds count.  Or, if you have a perpetrator on the run and you just want to wing him to slow him down, switch to the precision accuracy offered by single action.

Speaking of accuracy, I’d suggest dressing this thing up in appropriate tactical gear.  While the fiber optic sights are really quite superior, the Circuit Judge has a top rail.  I suggest going with something from Eotech.  The EXPS3-0’s larger field of view is perfect for immediate target acquisition.  You’ll be a stone-cold badass. 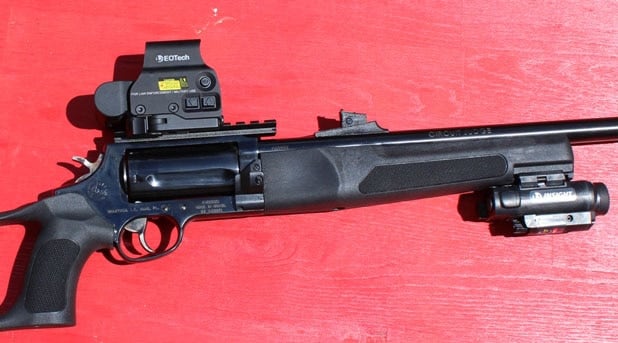 And get yourself a good weapon light.  The front rail on the Circuit Judge is too small to mount a bipod and a light, so you’ll have to make a really tough call here.  I went with the light.  A WL1-AA, also from Eotech.  Though I prefer the stability of a bipod, unless I’m on the mezzanine of the Emporium, I can’t really go prone.  A good forend light will give you the advantage when clearing dressing rooms, or guiding patrons to safety in the event of catastrophic power failure (while keeping your gun up for potential looters).

I’ve mounted a sling on the gas blocker thing.  It’s like a wing that comes out from beside the cylinder.  I prefer a single point bungee style AR sling, and the wing of the gas blocker is a good enough balance point.  That way, the Circuit Judge is always visible—right across my chest, like a cold blue pledge to protect and serve.

I’m really pleased that Rossi has built a Circuit Judge that will accept such a wide variety of ammunition.  My job is full of unknowns.  Maybe I want the less lethal benefits of short brass .410 shotshells.  There are certainly defensive situations that call on the devastating effects of 3” buckshot.   And this little baby will go through .45 Colts like Lando Calrissian.  Long Colts.  No offense to all of you Automatic Colt Pistol fans out there, but the Long Colt is a man’s cartridge.  Because its longer.

With this kind of potential, the Circuit Judge Tactical offers me the Tactical advantage I need to survive.  I like to keep an indexed mix of cartridges in my Judge.

See, if anyone ever tries to take my weapon, they will pull the trigger on an empty chamber.  Click.  The confusion that causes can sometimes be the advantage I need to regain the tactical advantage.

Shooting the Circuit Judge is about as much fun as you can have with your clothes on.

The barrel is rifled, so slugs and bullets are reasonably accurate.  From 25 yards, the Circuit Judge is reliable.  Buck shot will stay in center mass, mostly.  Birdshot will dust a target.  .45 Colt groups up reasonably well—combat accurate, for sure.  With five on tap, and five more in the stock, I can get off ten shots in under a minute.

I do have to offer one caution.  This gun demands respect.  If you disrespect it, you can get hurt.  Positioning is important.  The first time I shot the Circuit Judge, I learned my lesson.  I had set up some cardboard shoplifters at the range, and was peppering them with some .410 shot—but I’d held my left elbow a little high.  This was my fault.  The gas deflectors on the side of the cylinder only cover the bottom third of the cylinder.  Maybe a shell was a bit hot—I don’t know—but it wasn’t just gas that blew out the side of the gun.  It was lead.  Or something.

But that’s my fault.  Like I said—posture.  Keep that left arm tucked in at the side.  And forget firing from the hip.  No matter how tempting it would be to pepper the back sides of some mall rats.

Outside of 25 yards, the patterns open up really well—which makes it great for crowd control.  I can’t wait for the next Tickle-Me-Elmo style Black Friday debacle.  I’ll be there as the mobs crash the gates, Circuit Judge in hand.  This bad boy will get their attention, that’s for sure.

If you’re worried about collateral damage—maybe you need the accuracy to end a hostage situation—dial up a .45 Colt, drop down on one knee (and remember to keep that left arm down, away from the cylinder) and issue your cease and desist warning.

If the verbal warning isn’t enough, I bet just seeing the Circuit Judge will make that tango think twice.  And if it doesn’t, don’t worry.  You are a man.  This is a man’s gun.