There are lots of reviews of Ruger’s 10/22 rifles. But there’s a lot to be said.  The gun has been in production in numerous configurations since 1964.  That’s almost 50 years of reliable service from what is, by all accounts, a humble firearm.

The 10/22 Takedown is built on the basic 10/22 platform.  The most distinctive feature is, obviously, that the barrel is designed to pop on and off easily.  This makes the 10/22 Takedown the easiest of all 10/22s to store.

There are two other rather self-explanatory design features worthy of immediate mention.  The stock is synthetic and the barrel and frame are stainless steel.  The result is a gun that’s compact, easy to carry, corrosion resistant and durable. 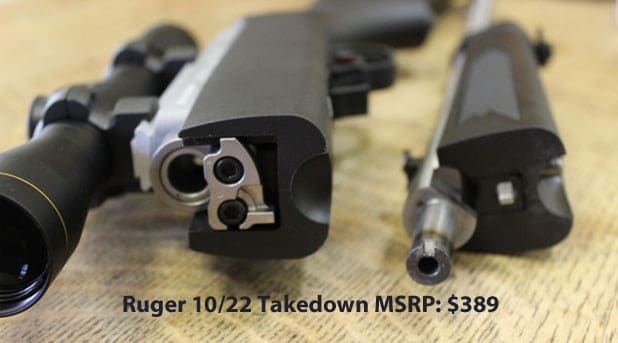 It feels exactly like a 10/22.  I’m not trying to be coy by saying that—there are more than five million of them floating around, so they’re remarkably common.  But sometimes changes like the takedown feature on the 10/22 Takedown dramatically alter the feel of the gun.

Look at the Marlin Papoose, for example.  A Marlin 70PSS is missing the fore end stock of the 795SS.  They feel different.

But not the 10/22 Takedown.  Its barrel has a fore end stock attached.   The connection is simple and intuitive.  With the barrel twisted slightly, the breech end slides into the action. Once the two halves are in place, they lock together with a minute reverse twist.  There is no play between the two halves.  It takes about a second and a half to put the rifle together, and even less time to take it apart.

The connection is rock solid.  That is an achievement in itself.  But the guts are also well designed.  The breech end of the barrel-half pokes right up into the action forming a reliable connection that isn’t affected by the joining of the component parts.  The magazine acts as the feed ramp.

The synthetic stock is heavily textured.  While I miss the feel of wood, I respect the durability of the plastic.  While wood can last forever, it requires care.  Plastic will breakdown eventually—but this isn’t an heirloom piece.  It’s a tool.  And the bead blasted look of the stainless steel is contrasted nicely by the black stocks.  It makes for a nice looking gun. 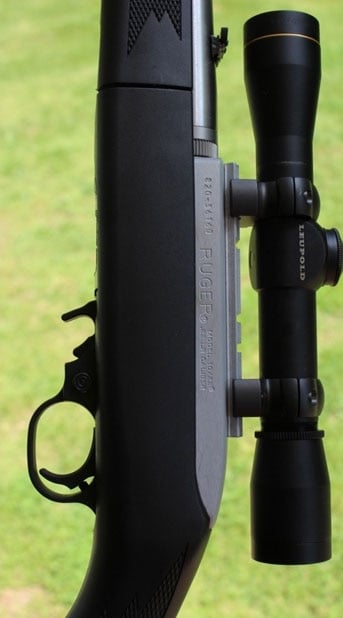 The sights on the 10/22 Takedown are excellent.  I’ve always liked Ruger’s basic rear sight—the white diamond between the black wings makes for very precise targeting.  My only hesitation comes from the thin front blade.  I have yet to bend or break one—but I am always afraid that I will.

The 10/22 takedown comes with a sight rail that can be screwed to the top of the frame.  While this allows for a wider variety of options than the proprietary Ruger mounts that are standard on so many of their rifles, it has an obvious limitation.  When the rail is installed, rear sight is blocked.  If you want to switch between a scope and the iron sights, you’ll have to remove the scope and the rail.  The problem might easily be fixed with a channel down the rail.

But I don’t know that I’ll be that inclined to switch from the scope.  I picked up a Leupold FX-1 4×28 Rimfire for this review and I’m enamored with the combination.  Without the scope, the 10/22 Takedown, like almost all of the other 10/22s is an amazingly accurate gun.  The trigger is reliable and breaks clean.

I found that the 10/22 shows off ammunition’s strengths and weaknesses more than most guns.

I had my best results with CCI Green Tag.  I shot five round groups: 20 at 25 yards and 20 from 50 yards.  If I had any random fliers (those that I felt were the fault of the ammunition and not my shooting), I didn’t count them in the average.

With iron sights, 16 target groups at 25 yards averaged just over two inches.  I had one nice group that tore a jagged hole right at an inch.

At 50 yards, the groups spread out to about five inches. With the addition of the scope, the groups tightened up.  From 50 yards, five round groups stayed closer to two inches.

I never have cottoned to shooting targets with a .22.  I prefer to shoot reactive targets.  Plinking with the iron sights was easy and rewarding.  Shooting with the scope was a lot of fun.  Maybe too much.  I burned through a box of Green Tags shooting clothes pins off of my clothesline.  Then my wife came home and I had to explain that it was done in the name of serious research.  I’ve never had such predictable accuracy with a .22 rifle.  More often than not, I missed because I botched my breathing—or pulled too hard on the trigger.  It wasn’t the gun.

There is one more thing to mention about the 10/22 Takedown, and that is the packaging.  The gun comes with a nice black bag.  The bag is large enough to hold the gun, several magazines, the gun’s lock, manuals—and a good bit of whatever you might wish to include.  While it isn’t an ideal bug out bag, it will allow for a whole lot of convenience.  It even has MOLLE straps on the outside for attaching more stuff.

When I heard that Ruger had released yet another 10/22, I didn’t really think it was news.  But the Takedown part seemed worthy of closer inspection.  Now I’m sold.  I think this is a really logical addition to the Ruger catalog.  It is mechanically sound.  It performs way better than I can.  The compact size means that it travels well. 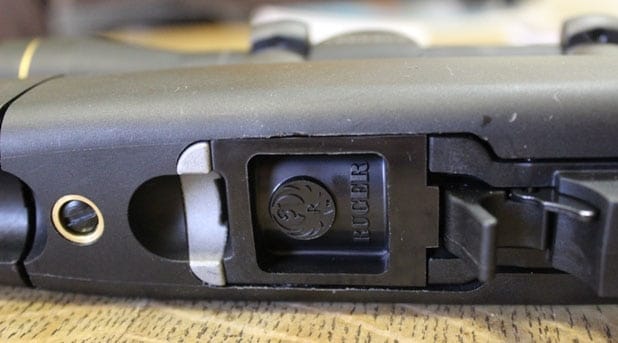 In fact, I would say that this version of the 10/22 shoots as well as the other 10/22s with similar barrel profiles and lengths.  And that’s the test.  There is no disputing that the 10/22 is a great gun.  The only real question was if this one would be as good as the rest.

I think this is the best.  With the 50th anniversary less than two years out, I wonder how Ruger plans to top this one.