The market for bolt action rifles is wide and diverse.  For more than 100 years, hunters have relied on the durability and dependability of what is, by this point, an antiquated design.  Yet companies are still hammering out design innovations (disproving my antiquated theory).

While many hunters will debate the nuances of bolt design when trying to decide between a new Winchester or Browning, many of us have had to settle for much less (in terms of performance) because we have much less to spend.

Sturm Ruger, one company continuing to innovate, has done something truly remarkable.  Their American Rifle combines reliability, accuracy, aesthetics and craftsmanship to create an inexpensive bolt action rifle that shoots way above its price range.

I’m not going to try and tell you that the American Rifle is as good as a Model 70—but I will tell you that the whitetail buck on the terminal end of the ballistic trajectory won’t be able to tell the difference.

The American Rifle has a familiar look.  The 22-inch barrel is finished in a matte black oxide that is matched by the black plastic stock.  The finish embodies the American Rifle’s approach to utilitarian ideals.  While it doesn’t make for a display piece, the finish is inexpensive and durable.

Even though it lacks the warmth and natural beauty of wood, the American Rifle’s stock doesn’t sacrifice aesthetics.  It is glass-filled polypropylene — fancy plastic.  The texture makes for a really easy hold on the grip, and the finger shelf on the forend allows for any number of shooting positions.

Like many bolt-action rifles, the American has no iron sights.  Ruger has shifted away from their usual proprietary mounting bases and drilled and tapped the American to accept Weaver-style bases.  Two are provided with the gun.

The bolt is stainless—with a few black accents.  It’s a short throw bolt with dual cocking cams.  It has three locking lugs, and is closer to Browning’s push feed than Winchester’s controlled feed.  Even with fat rounds like the .308, the action is easy to work, fast or slow.  The ramp feeds anything and doesn’t mar the tips—not even on the delicate hollow points of Nosler bullets.

The ejector, like ejectors should, snaps out shells and throws them in to a tidy pile (if you stay in the same spot).  The bolt is easy to work from the shoulder—something I don’t do very gracefully.

The barrel is cold hammer forged.  It has a very thin, graceful taper.  While this would heat up easily under rapid fire conditions (and then lose some accuracy), this gun is really designed to shoot accurately the first time. 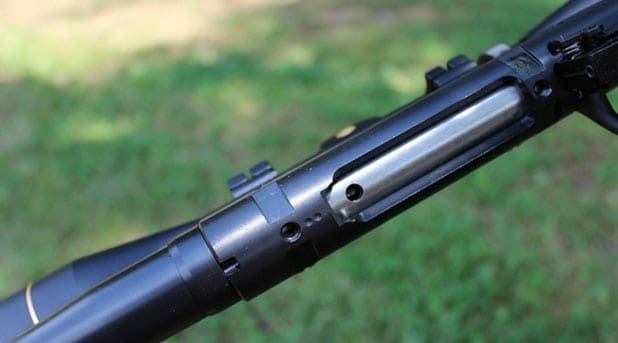 The receiver is milled.  It rides over the bore, which makes manually loading a round more complicated—but not impossible.  The barrel and receiver are connected with a subtle barrel nut.

Unlike some of the other Rugers, the American’s barrel is free floated.  The American uses a very solid bedding system that relies on two V-shaped blocks.  There are two Vs in the stock—steel blocks molded into the plastic.  These align with cut slabs on the receiver.  Both the bedding block and slabs are tapped for bolts that hold everything together.  This should be nearly indestructible. 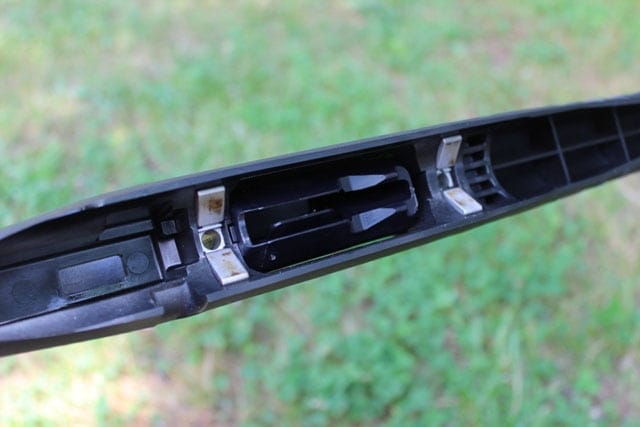 The gun also features the Ruger Marksman Adjustable Trigger, which will be familiar to fans of Savage’s Accu Trigger.  The trigger is user adjustable.  While I’m not a fan of the trigger safety (just one more thing I can break in the field), I can’t complain about how it shoots.  I never really notice it while I am shooting.  I have the trigger dialed down to a crisp 3.5-pound break, which is perfect for me.

The magazine on the American is a simple rotary magazine that will be familiar to Ruger shooters.  It rattles a bit when it is empty, but less when it is full.  It holds four rounds, and fits in flush with the stock.  I will confess a mistrust of plastic, and I’m not sure how durable the American magazine will be (it is the only piece of the gun that feels insufficient).  But I bet there will be other options soon enough—and I ran the American through its paces without seeing a bit of wear on the magazine. 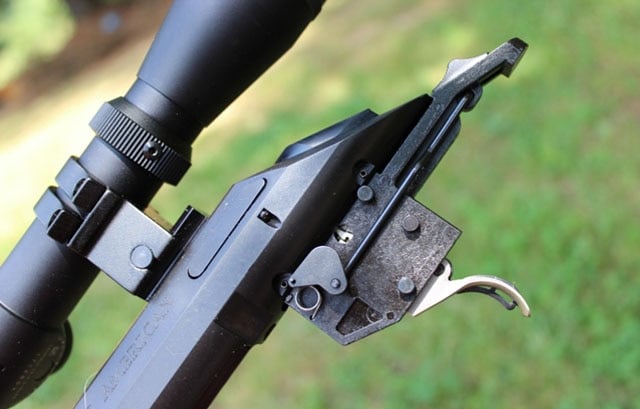 One of my favorite features of the gun is subtle, but important to me.  The safety, mounted on the tang just below the back of the bolt, is firm enough to be safe, yet easy enough to use quietly.  And it is clearly marked.  The red is marked with a nice “F”, which I understand.  I have a hard time with this.  Red.  It took years for this to really register with me.  In fact, it wasn’t until I started to habitually sing a line from Neil Young’s Powderfinger—“red means run, son…” that I was able remember when a safety was on or off.  Ruger knows the world is full of chuckle-heads like me, so they threw in an “F”.  This means fire, if you speak American.

It shoots very well.  I put a Leupold 3-9×40 on the American rifle and the combination felt perfect.  Sighting in the American was easy enough.

I shot several different types of ammunition.  For each brand, I shot five 4-round groups.  At 100 yards, shooting from a seated rest, the groups came in like this.

Nosler.  These are my bullets of choice these days.  And the results show why.  The best group came in at 0.80 inches center to center.

Ultramax 168 grain reloads.  While these are not the most attractive rounds, they do well for the price.  I burned through more than 200 of these getting the feel for the American at different ranges.  I can’t complain.  The groups averaged a bit more—coming in at 1.4 inches.

Hornady.  Also 168 grain bullets.  The Hornady performed just as I expected, and very close to the Nosler.  Groups averaged 0.97 inches.

Any of these, for the purposes the American is designed for, would be just fine.

Does the Ruger American Rifle have any competition?

I’m talking about price here.  It is easy enough to find a bolt action rifle that will shoot as well, or maybe better than an American Rifle.  But at what price?

I’m not sure.  Savage comes to mind.  The Axis XP has a good reputation, though I haven’t shot it.  And Savage makes most of their guns in the states, too—so it would make for a good side-by-side shoot out.

The conclusion should be obvious.  This gun is kickass.  The American Rifle will allow more shooters to hunt for less.  The durability of the plastic stock will appeal to others who don’t want to wander off into the woods with their heirlooms or works of art. 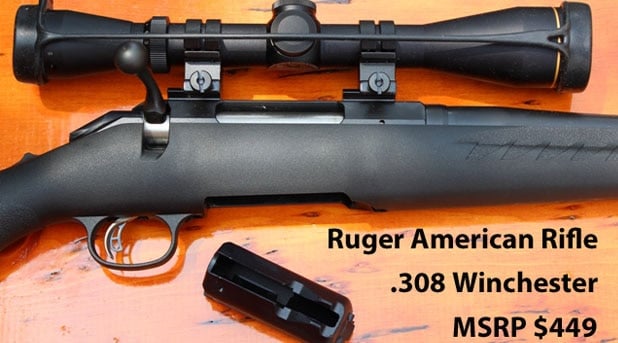 But more impressive than anything I’ve mentioned so far is the inspiration behind the rifle’s moniker.  Everything about the American Rifle is made in America.  This is odd.  How can Ruger produce a gun of this quality, at this price, and still make everything stateside?