Ruger’s LC9S takes an old gun and teaches it some new tricks. With the same compact design that has made it a favorite amongst concealed carriers, the LC9S is packed with enough new features that it feels like an entirely new gun. 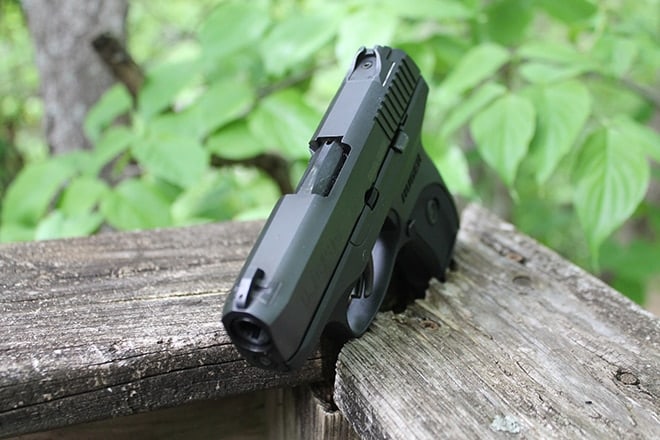 While the shorter barrel means great concealment, it also equates to greater overall recoil on the range. (Photo by: Jacki Billings)

The first thing that you’ll notice about the Ruger is it’s a no-muss, no-fuss striker-fired pistol. Chambered in 9mm, with a 7+1 capacity the Ruger’s single stack frame boasts a compact size. With an overall length of just 6-inches, barrel length at 3.12-inches and width just under 1-inch, it keeps to the concept of the original LC9’s easy concealability, but in a hammerless, striker-fired design.

Ruger offers two versions of this pistol, the LC9s and LC9S Pro. The standard LC9S features an external manual safety and magazine disconnect safety while the Pro version does not. For this review, I took a look at the LC9S Pro. 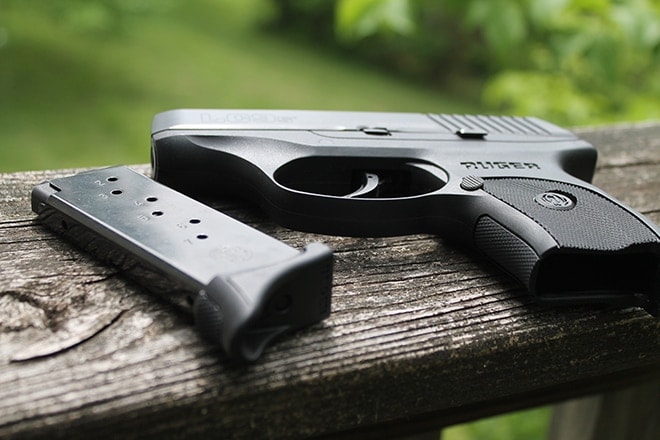 I was attracted to the Ruger LC9S Pro because I was on the hunt for a compact 9mm striker-fired pistol with no manual safety for concealed carry. The LC9S Pro fit this bill and before I knew it, I was a proud owner.

Now, my Ruger is not by any means a pretty gun. In fact, I find it downright ugly, but that was in a way my intention. Since I wanted a basic carry gun that wouldn’t draw attention, I chose to stick with their all-black design. Had I chosen to go for bright and beautiful, Ruger doesn’t disappoint with a wide selection of color options. From purple to camouflage to Tiffany blue, this Ruger is one of the most colorful guns on the market so if you’re opposed to the idea of carrying something unattractive, I suggest opting for a colored model. 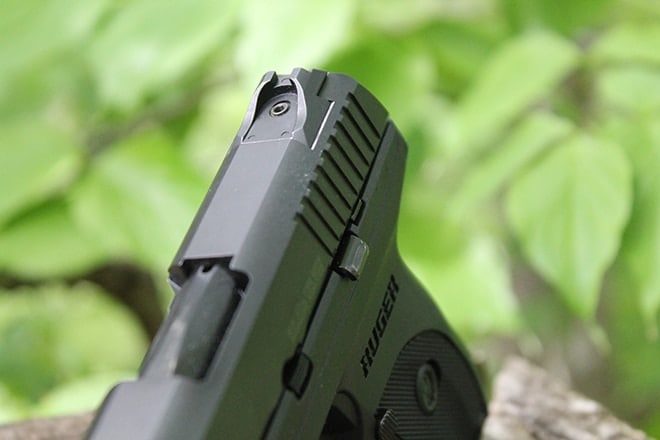 The dove-tailed, three-dot sight system is quick and easy to see on target. (Photo by: Jacki Billings)

Proving to be a plus for weaker hands, the LC9S has one of the easiest slides to manipulate that I’ve come across on a handgun. Shooters racking it full palmed or with just two fingers will find both easy to accomplish on the LC9S Pro’s alloy steel.

A checkered grip frame rounds out the features on this gun. I found it to be non-intrusive enough. I don’t think it necessarily does anything special for my grip, but I will say I haven’t dropped the gun or slipped while shooting so I guess it’s doing its job. 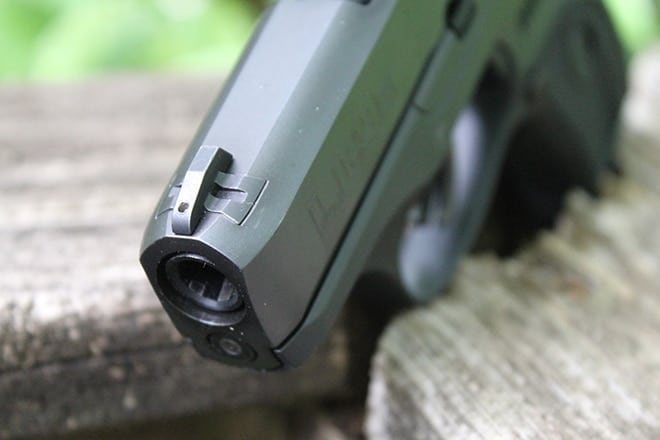 Manufactured with alloy steel, the slide is one of the easiest to manipulate. (Photo by: Jacki Billings)

The grip design itself is perfect for those with smaller hands. It’s slim build fit the curves of my tiny palm very well. Gripping was no issue for me on this gun, which is good considering the snappy recoil. Men or ladies with larger hands will have a tough time solidly gripping the gun as there isn’t as much real estate to hold onto, but a magazine with extended floor-plate fixes that issue.

For years, Ruger LC9 fans have been dropping aftermarket triggers into their beloved pieces. Who could really blame them? I remember the first time I picked up a LC9 and winced pulling the trigger. The thing felt gritty and dirty and I was all too happy to hand it back.

It was with great trepidation that I put my shooting finger on the trigger of the LC9S Pro. I was sure I would recoil in horror, but was surprised to find the grit was gone.

Turns out, the good folks over at Ruger listened to the complaints, making a change in the design of the LC9S triggers. Now with a cleaner break (and a whole lot less wincing) the LC9S’ trigger offers a much smoother pull.

Is it the nicest trigger on the market? No, but it’s a vast improvement over what Ruger was selling a few years ago. 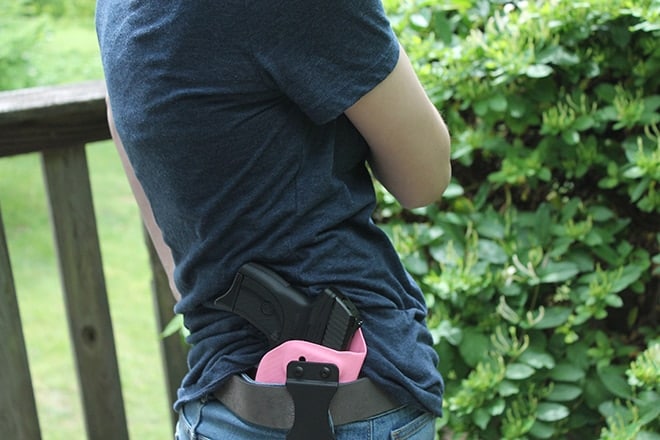 Paired with a Guardian Angel Mini-IWB holster, the Ruger rides comfortably behind the hip. (Photo by: Jacki Billings)

What first attracted me to the Ruger LC9S was the small form. After having just bought myself a new Springfield Mod.2 for EDC, I discovered that some outfits required an even more compact option. Enter the Ruger LC9.

Routinely wearing tighter fitting t-shirts in the summer, I found it much easier to conceal the Ruger than just about anything else in my arsenal. The rounded curves seemed to mold into me and create a less obvious shelf behind my hip. The slim width paired well with my petite frame and the shorter height mitigated the issue of that notorious shelf. Paired with a Guardian Angel Mini-IWB holster and a good gun belt and the Ruger all but disappeared into my side. 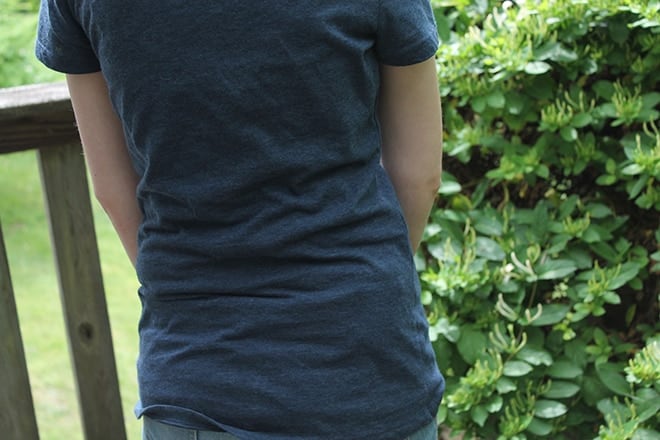 With a slimmer and shorter design, the LC9S conceals well even on smaller body frames. (Photo by: Jacki Billings)

Aside from the shorter barrel and slim width, the LC9S also boasts a lightweight design. On someone like me, this is a huge plus. At no point did I feel weighed down by the pistol. Although I highly recommend a good, solid gun belt, I found that I could easily get away with a regular, fashion belt. It’s that light.

My only issue with the Ruger came when testing a pair of concealment leggings from UnderTech UnderCover. There’s a noticeable space between the rear of the slide and the frame which caused the retention loop of the leggings to become embedded in the firearm. While I haven’t had this issue crop up in any other holsters or with any other clothing, I highly suggest you don’t invest in the leggings if you’re running a LC9S.

The big test is always out on the range. It doesn’t matter how pretty a gun is or how nice it carries, if it doesn’t shoot reliably it’s marked off my list. Fortunately the Ruger escapes the trash pile and lands safely in the keep pile.

I had a peppering of ammo to run through the Ruger. Everything from the standard cheap FMJ down to the high-end hollow points went through the Ruger’s barrel. Impressively, the LC9 fired every round with no hang-ups or misfires. 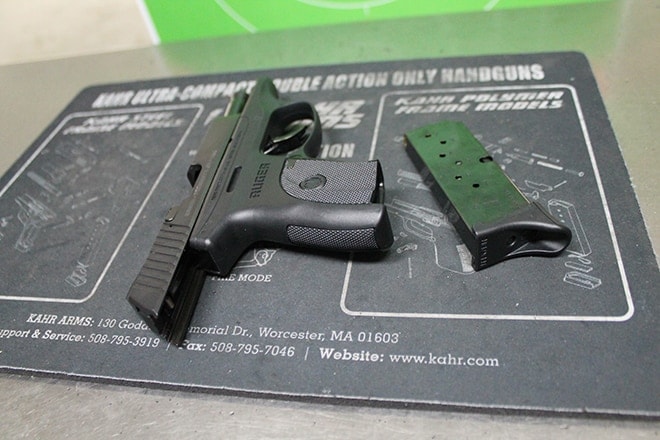 A blast to plink with on the range, the Ruger LC9S maintains the high bar set by the original LC9. (Photo: Jacki Billings)

Though my range sessions were misfire free, I did notice that the Ruger’s magazine seemed to consistently catch in the mag well when loading hollow points. At first, I wondered if I was having a bad day and not angling my magazine right, but after handing the gun and mag off to my shooting partner, I quickly saw that the problem wasn’t with me.

A quick on site assessment seemed to show that every so often the round would rock forward in the magazine, thus catching the well when inserted. The fix was an easy one, simply re-seating the round in place and slapping the magazine into the well.

On the range, it was a mere annoyance but I could easily see myself wasting valuable time during a tactical reload on the streets. Digging a little deeper, I discovered that magazine issues seem to crop up with some of the LC9S models. I suggest a good inspection of a newly purchased LC9S and a call to Ruger if magazine issues pop up along the way. 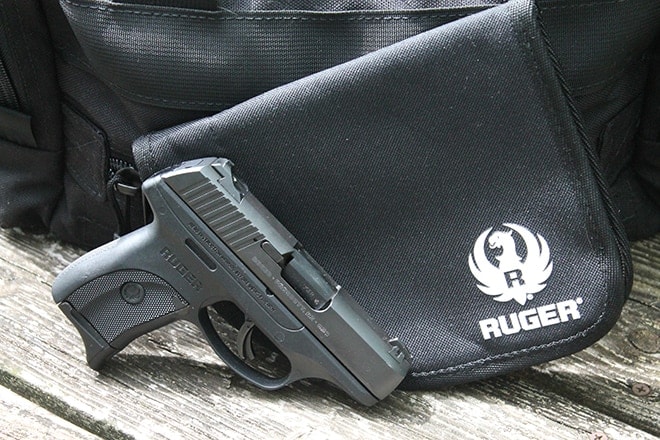 Ruger’s LC9S Pro is a striker-fired approach on the favorite LC9 model. (Photo by: Jacki Billings)

The Ruger LC9S Pro has proven to be a veritable contender in the concealed carry market and I find it to be a great option for women in particular. Though the smaller size does lend itself to greater recoil on the range, its concealability outweighs any other negatives. If you’re on the hunt for a concealable single-stack, striker-fired pistol, the Ruger LC9S should definitely make your short list. The Ruger LC9S retails for $479.