The 22 LR cartridge has been around for a long time and any gun maker worth its salt has at least one pistol chambered in this little round. There is a 22 pistol for everyone whether you want a pocket pistol for personal protection or a heavy, match grade handgun. Somewhere in the middle of these two broad categories are the “kit” guns.

Kit guns are those 22 caliber pistols, usually revolvers, that are handier than a pocket pistol but don’t weigh on the belt like a target gun would. These are the guns that go in the tackle box or the boat for emergencies. These are the guns that reside on the hip of the hunter and hiker to ward off the curious coyote or procure small game for the pot.

When the Ruger LCRx debuted with a 3-inch barrel in 2015, some thought it a great kit gun in 38 Special, but the rest of us were waiting for a 22 LR version. Now that wait is over.

On the outside, the LCRx’s outline resembles a traditional revolver of an optimal service/carry size. The pistol has a polymer grip frame surrounded by a rubber Hogue Tamer Grip and an aluminum frame enclosing the cylinder. Like the other LCRs, the stainless-steel barrel is a liner enclosed by an aluminum shroud. 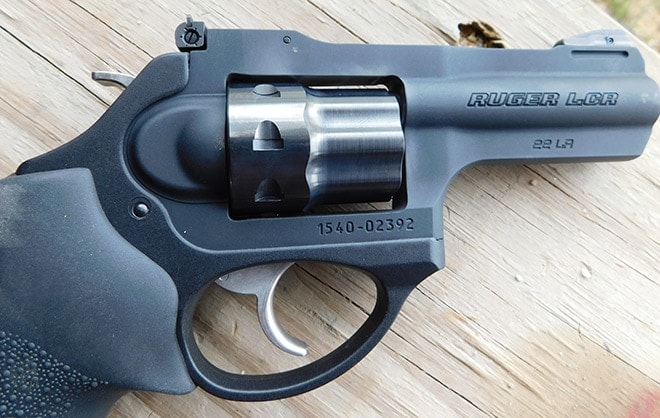 All the important points of pressure are stainless steel in construction including the cylinder lock-up points, the internal parts, the trigger, the cylinder, the barrel, and the ejector rod/ crane assembly.

The cylinder is heavily fluted and has an eight-shot capacity. The sights are far better than the original LCR with an adjustable rear sight and a changeable white ramped fore sight. You get a finer sight picture as well as the LCRx 22 has a 3-inch barrel. Like the other LCRx variants, this one has an exposed hammer so the gun may be cocked for a light trigger pull. Otherwise, the gun may be fired rapidly by simply pulling the trigger all the way through. 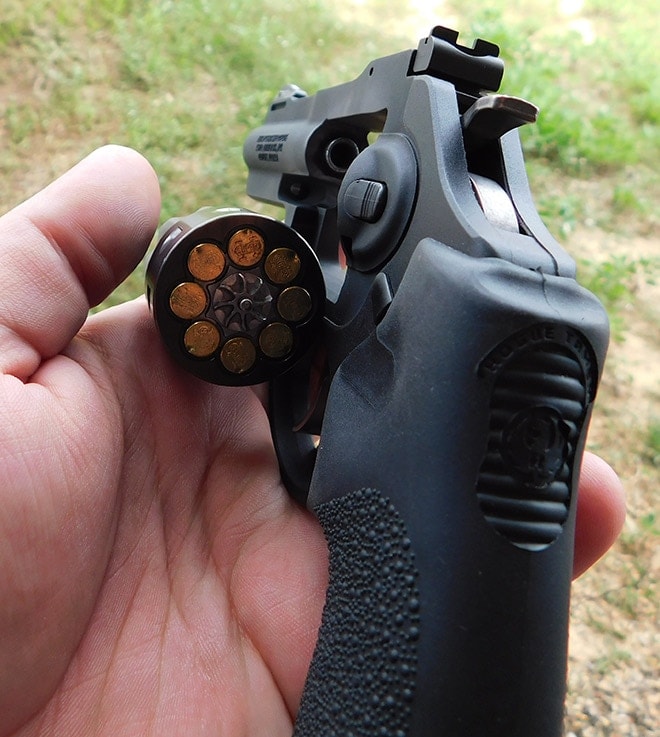 The LCRx 22 LR holds eight rounds of ammunition. This revolver platform will handle anything from weak 22 Short loads to high velocity CCI Stingers all the way to 22 LR rat shot. (Photo: Terril Herbert)

It took me a few years to get over the look of the Lightweight Compact Revolver before finally purchasing one in 2015. This polymer/aluminum framed “hammerless” revolver is a new sort of classic when it comes to concealed carry. But when I first received my LCRx in 22 LR, I thought it was nice to see that same utilitarian design revamped for a more recreational purpose in mind. I even believed the pistol, despite weighing in at only 16.9 ounces fully loaded, might make a good target shooting gun at reasonable ranges. In terms of purpose, the details can only be hashed out on the range.

Through several range trips and a 400-round battery of tests I concluded that the Ruger LCRx has some very strong points.

Loading and unloading is straightforward. It is done by pushing the cylinder release inward with the thumb and popping out the cylinder to load your 22 LR shells. This can be a bit awkward considering you have eight chambers to load and they are quite small, as are the cartridges. Close the cylinder and you are ready to shoot. You can choose to fire the gun by pulling the trigger all the way through or by cocking the hammer and pulling the trigger for a lighter trigger pull. Speaking of trigger pull, we are talking just under 5 pounds in single action and just over 9 pounds in double action. The single action trigger pull has virtually no slack at all while the double action pull is long, but smooth with no binding or stacking involved — it is that legendary LCR double action trigger. The moment the trigger is at its heaviest, it breaks. 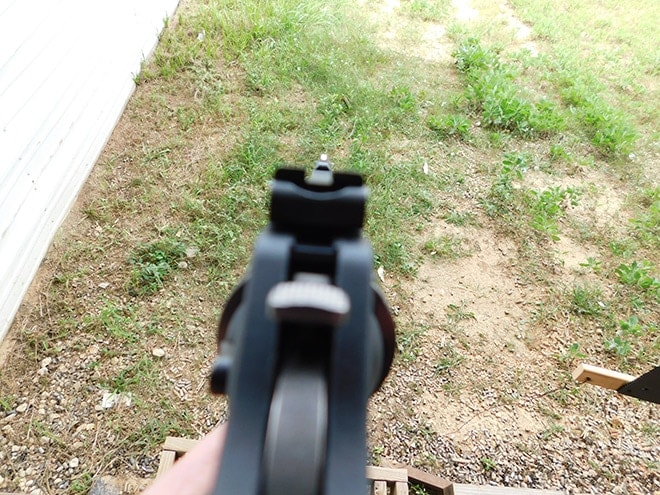 Indeed, the trigger pull in double action feels lighter than what it is and I was tempted to fire most of the time this way. I got a new shooter behind the LCRx with good results at 7 yards — first by firing a string in single action, then in double action, which took more effort to master. Recoil was next to nothing. The gun was easy to operate and the grip and hammer were perfectly shaped for easy manipulation and a good grasp. It is also light enough to not be tiresome in the hand, which was especially valuable for that new shooter. The sights were also very easy to read and they are adjustable unlike the sights on most revolvers I am apt to shoot.

Using a variety of ammunition, I could reliably put eight shots into a 2-inch cluster shooting single action at 7 yards with that group opening to 3.5 inches in double action. I stretched the LCRx out to 25 yards and could nominally work a 6-inch group, with 4 inches being about my best, firing single action. I felt accuracy was ample, though the gun could probably do better. This is all off-hand, real world shooting — not off a vise.

A typical group taken at 7 yards with Winchester M22 ammunition firing in single action. This 2-inch pattern was virtually repeated with all the other ammunition I tried. (Photo: Terril Herbert)

Oddly enough, accuracy with all ammunition was the same on paper, though the ballistics are far from the same. I turned on my Caldwell chronograph and took some shots from 10 feet away to see what this 3-inch barreled revolver could do, velocity-wise.

Out of a handgun, all this ammunition loses significant velocity potential. The CCI Stinger loses considerably over its 1640 fps advertised velocity: with an average of 1202 fps, muzzle energy comes out to 103 feet pounds of energy.

Reliability in the test was 100 percent with no failures to fire the ammunition. Granted, one might run into a dud round when using cheap bulk pack ammunition, but rimfire revolvers will be less problematic with less reliable ammunition. Ejection was brisk. I gave a sharp push on the ejector rod with the thumb and all cases always flew out with some authority. 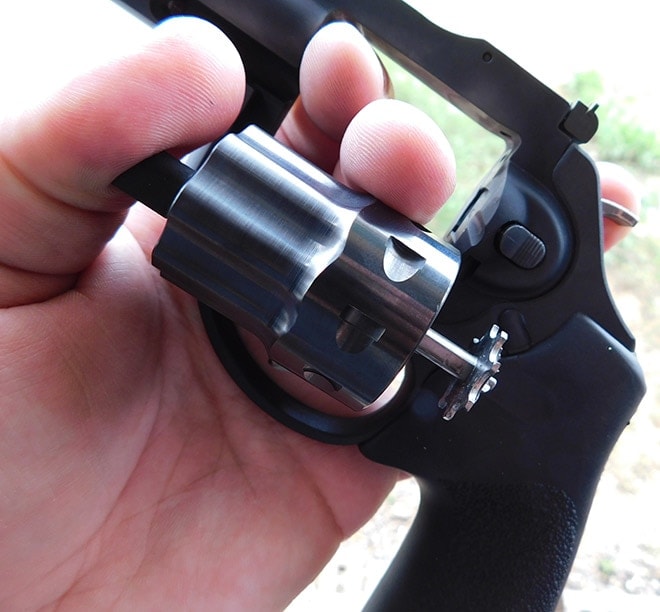 Though the short, snub-nose ejector rod is retained, ejection of the tiny 22 LR shells was always brisk and reliable. No stuck cases. (Photo: Terril Herbert)

So it passed the test with flying colors, right? Well, not exactly.

The Ruger LCRx is looking good but there are a few things to keep in mind before buying.

Before I get to shooting any pistol, I hunt for the accessories market first, especially holster options. Other than a sole option offered by Ruger, holster options are relatively few and will need to be ordered ahead of time. The LCRx 3 inch isn’t exactly new, with the 38 Special version being out since 2015. I only hope the options continue to expand, but alas, it is something to keep in mind because if you are going to pack the LCRx, you will need some leather. 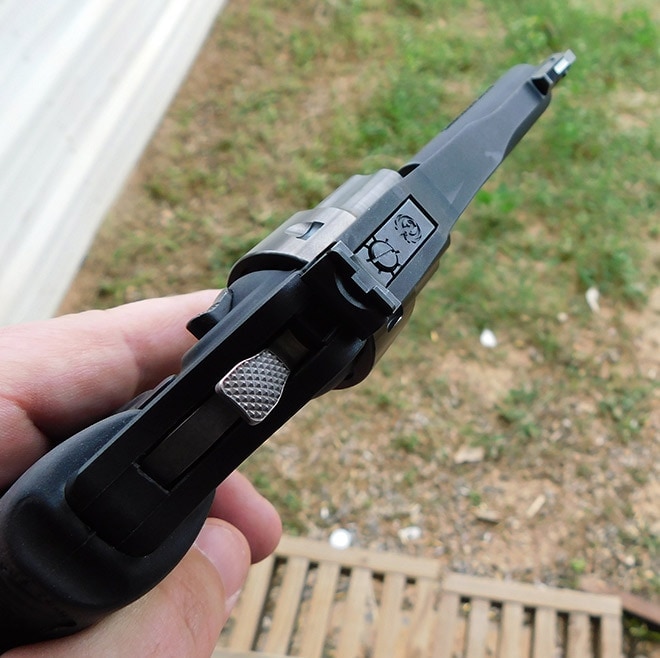 Coming in at only 16.9 ounces fully loaded, the weight of the LCRx is a double edged sword. While it makes it a forgiving hiking companion, the light weight also leads to shooter wobble which hinders accuracy at farther rangers. (Photo: Terril Herbert)

In terms of actual shooting, the LCRx has one major handicap which is, ironically enough, part of its strong suit — its weight. Though not the lightest “kit” gun out there, the LCRx weighs very little and can be left out of the way and forgotten until needed. The flip side is the lack of steadiness while aiming. A heavier gun will be steadier in the hand while shooting. I tended to wave the gun from side to side as I tried taking aim. This was of little consequence at 7 yards, but further out it played a role.

Lastly, we must talk about the price. This has nothing to do with money so much as the roles the LCRx will fit best. The LCRx can be had for under $500, quite low in its class for a “kit” gun. But do you really want to relegate a $400-something handgun to the tackle box? Dear me, no. This platform has a lot more potential than that. This gun is one that should be shot and carried into those outdoor adventures. 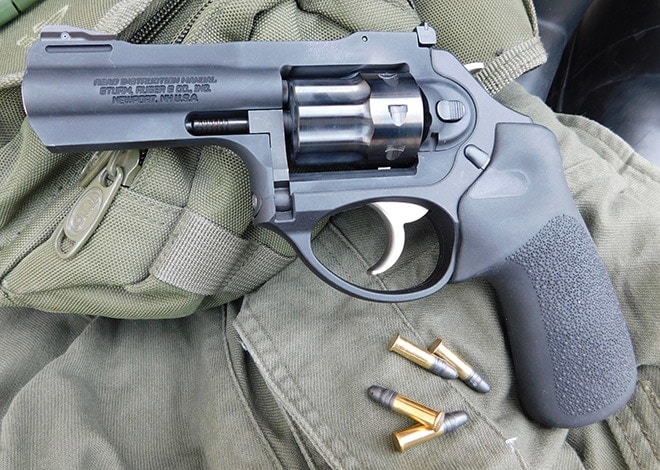 In summary, the Ruger LCRx in 22 LR makes a lot of sense as a good “all around” handgun, not just a kit gun. It’s aluminum and stainless-steel construction will weather any conceivable event and the weight is great for carry, if you can rig the right holster before going afield. Accuracy is ample and the sights are excellent compared to some of Smith & Wesson’s kit guns.

The gun’s light weight won’t fatigue a new shooter and the platform is easy to understand with negligible recoil to boot.

So, whether you are looking for your first handgun or you are a seasoned shooter looking for a woods companion, the Ruger LCRx is a solid choice.