The Ruger New Bearcat really isn’t new. The design has actually been around for a while, but the gun has been re-released.

Although there are a few negative things to be said about it, there are no complaints about shooting the little .22 revolver. Keep that in mind.

Let me get something off my chest

I don’t usually say this sort of thing, but there’s really only one thing wrong with the Ruger New Bearcat: the price.

I don’t usually say that because I think you have to weigh a lot of different factors to decide whether a gun is worth a certain amount of money and usually part of that calculation is one’s disposable income—something that varies greatly from person to person. So, typically, you have to make the final judgment for yourself as to whether you think a given gun is worth a given amount of money.

But every once in a while you come across a situation where you just have to shake your head and go “wha?” And this is one of them.

I think the “New Bearcat” (so named because Ruger produced an older version of the same gun up until 1973, then discontinued it for 20 years before re-introducing it with some safety changes) is a fine gun. The nice little .22 is very well made and easy for even a guy like me with large hands to shoot well. But Ruger set the MSRP at $549 for the blued version and $599 for the satin stainless steel.

Whereas the Ruger convertible Single-six costs between $549 and $629 (depending on barrel length, finish, and type of grip) and comes with two interchangeable cylinders, one in .22 LR and the other in .22 Magnum.

With that you get a slightly larger gun, with your choice of adjustable or fixed sighting systems, with barrel length options, and a complete second cylinder—for essentially the same cost.

Does that make any sense to you? It doesn’t to me.

OK, now that I have that off my chest, let’s talk about the gun. 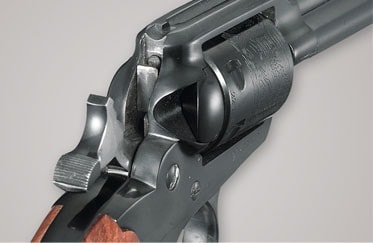 The fit and finish was good with the hardwood being attractive, but not fancy, and the satin stainless steel reliably scratch-resistant.

The one real advantage the Bearcat has over the Single-Six guns is that it was designed specifically for the .22 cartridges. Everything is suitably scaled for it, meaning the gun is a bit smaller but still robust enough that it will last for generations with normal use.

At nine-inches of overall length it’s pretty small and almost ideal as a little ‘kit’ gun.

The simple, fixed sights are accurate enough for what this gun was designed for and anyone with reasonably decent handgun skills should be able to maintain about a three-inch group at 25 yards. This makes it perfect for plinking or hunting small game.

Recoil is minimal and, being a revolver, it has a tendency to be more reliable than many semi-autos are in shooting rimfire cartridges. Certainly, we didn’t experience any problems with the gun for the BallistcisByTheInch.com .22 tests last summer.

The performance from the ammunition tested was what you would expect from a gun with a 4.2-inch barrel.

The trigger on the one we had wasn’t great, but it wasn’t bad either. Usually, the trigger on a Ruger revolver takes a little while to break in completely and this one had been through that process. Since it is only a single-action gun it had a little stiffer trigger than one might expect from a target pistol, but since it isn’t really a target pistol, it didn’t bother me that much.

Bottom line, this is a nice little gun and it would be excellent for teaching new shooters. It is particularly well suited for people who are younger, as the smaller grip and very slight recoil will make it easy for them to develop good shooting habits (and avoid bad ones).

If you are not bothered by the price then it would be a wonderful gun to have. But if you pick one up on sale, or well-used one at a decent price, then even better.