I’m a devoted revolver man.  I think there is something really satisfying in the revolution of a cylinder as a hammer travels back.  The clicks and pops and the internal mechanisms all fall into place speak to me.  And there is no match for a good revolver’s reliability.

But the classic wheel guns have a hard time competing with the polymer semi-autos, or that’s what we’re led to believe.  It is certainly true where I live, out in the sticks, at the northern end of the old south.

My local gun store does a brisk business in the moderately priced automatics.  They sell their fair share of snub-nosed revolvers, too, but the big revolvers tend to stack up, collect dust.

Yet, I’m told that’s odd, that this lag in large framed revolver sales is peculiar to the region.  And maybe so.  I’ve been trying to get a couple of classic revolvers in for review, and no one has anything left in stock.  The manufacturers are sold out, and the distributors have run dry.  These guns are selling, somewhere.  They’re popular enough to be selling out.

So when Ruger found a .44 Redhawk that they were willing to loan for a review, I felt somewhat privileged.

The Redhawk is Ruger’s traditional large frame double action revolver.  Most are .44 Magnums, though there is one model in production that shoots .45 ACP.  These guns have varying barrel lengths.  Most have widely flared wooden grips.  The Hunter model has scope ring mounts milled into the rib on top of the barrel.  The barrel is seven and a half inches long, which makes the whole gun 13 inches long. 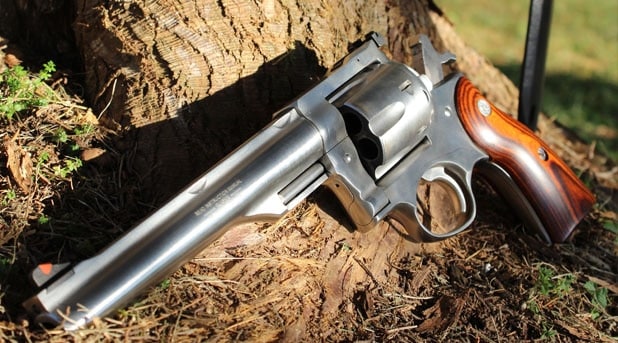 A gun that long takes a while to haul out of a holster, so these aren’t terribly fast guns in any traditional quick-draw sense. But they’re menacing.  Bears don’t much care about the visual deterrent of a big revolver, but people do.  The lasting legacy of Dirty Harry is testament to that.

The 44 Special is a decent round.  In a gun this big (and heavy), the more modest of the .44 rounds is super easy to control.  The .44 Magnum, which is the reason the gun exists, will bite.  It is snappy.  If you’re not ready for the recoil, the gun can jump.  And even if you are ready, the wooden grips on the Redhawk offer little padding.  It is punishing.  It can hurt.  I was holding the grip a bit high on my first shots.  Didn’t take me long to break that habit.

But it is the terminal ballistics that matter, here, not the recoil.  And the .44 Magnum will suffice.  It will do.

I like the long barrel on a Redhawk, too.  It helps with accuracy, of course, but the longer barrel increases the sight picture.  The front sight is a nice orange blade, and is drift adjustable.  The rear sight is a white outlined square notch adjustable for windage and height.  Very easy to adjust, and easy to use. 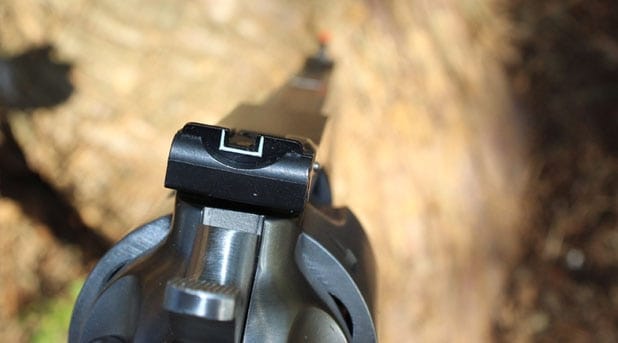 Having watched several shooters try their hand with the Redhawk, I have made some observations.  Their first shot with the .44 Magnum is often more accurate than their second.  This has nothing to do with the gun, and everything to do with the kick (or the anticipation of the kick).  It takes some getting used to.  If you want to test the theory, put in an empty case along side five live rounds, and then spin the cylinder and shoot.  Watch how much hand movement you add to the equation when the hammer falls on an empty chamber.  If you flinch at all, you have something to work on. 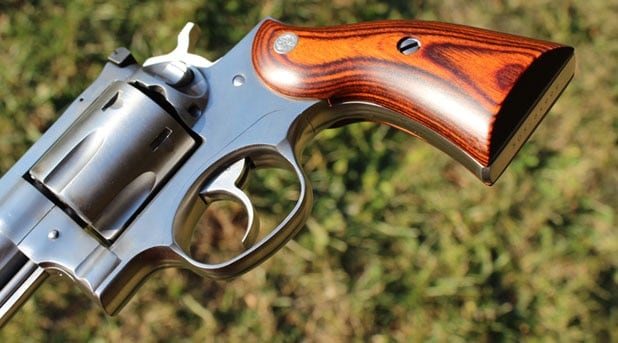 The trigger on this Redhawk breaks at four pounds.  The double action pull is heavier, but you can watch the video and see a couple of skilled revolver shooters doing decent work with the Redhawk in double action.  I can’t do it.  But that’s my choice.  If I’m shooting a revolver in double action mode, I’ll be shooting from the hip, and from really close.

I like the Redhawk, a lot.  This is the ideal gun for those extended camping trips, or for hunting.  I’m ignoring the weight, of course, but I’m willing to carry a heavy gun.  Always have been.

And the price tag?  MSRP is $1,049.  That’s close to what these actually sell for.  And it is an investment, for some.  The gun will outlast you if it is cared for. 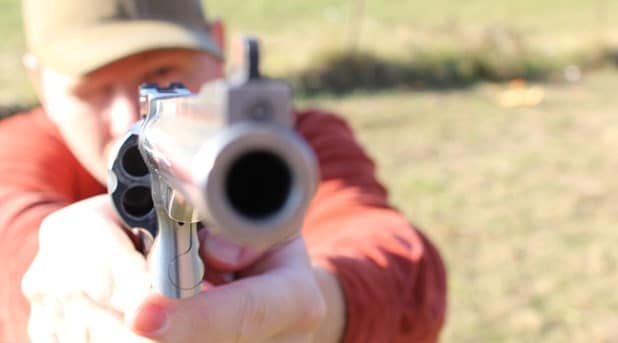 And, for what it’s worth, I have a friend who is a gun smith.  He specializes in single action actions, but knows his way around a double action, too.  He thinks Ruger is making the best revolvers available today.  That means something to me, as he sees the insides.  He see parts of these guns I can’t even name, and he knows how to fix the problems.  But the Rugers he sees don’t need as much work as the others.

Make of that what you will.  Ruger is humming along right now.  They know what they’re doing.  And their guns have never been better.

Special thanks again to Bob Lawman at Firearms Novelity for his excellent range, and expert revolver insight.