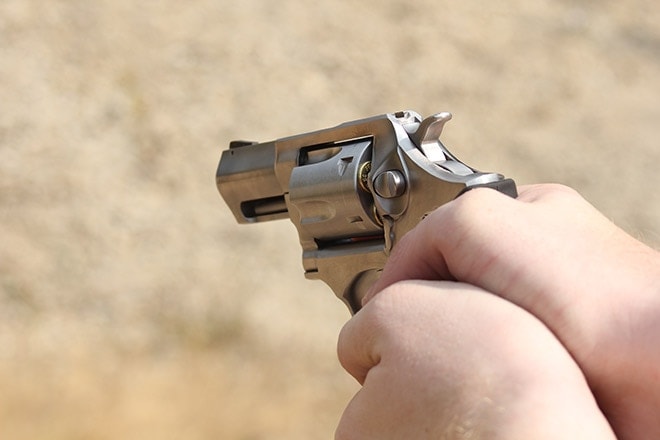 Because of its heft and legendary construction, the Ruger SP101 makes for a surprisingly fun range gun as well as a top notch field revolver. (Photo: Nicholas Oetken)

In this gun writer’s humble opinion, the Ruger SP101 is the unequivocal pinnacle of Magnum power in a robust yet compact offering.  While the SP101 is available in a number of different calibers (.357 Magnum, .38 Special, .327 Federal, and .22 LR) and barrel lengths (4.2-inch, 3-inch, and 2.25-inch), this review will focus on the 2.25-inch barreled version that holds five rounds of .357 Magnum. 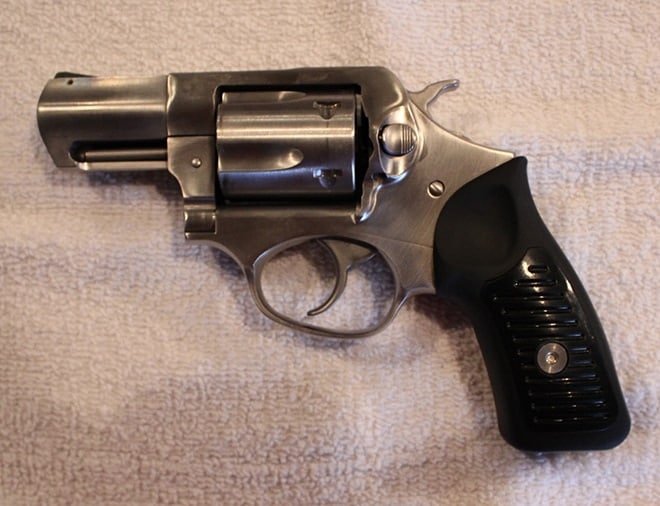 The first thing that you’ll notice about the SP101 when you pick it up is the weight.  This gun feels like a Humvee for its size at just over 25 ounces.  That will either be a negative or a positive, depending on your need and preference.  If you want a revolver that you won’t notice when you carry it, the SP101 is probably going to be out of the running.

On the flip side, this heavier weight is the direct result of the SP101’s most well known characteristic: durability.  There’s more beef in the top strap, barrel, and in between the chambers of the cylinder than any other similarly sized revolver I can think of.  Not only does this make the SP101 practically indestructible on the inside and out, it’s also one of the biggest factors in making the SP101 an effective shooter, for reasons I’ll go into in a bit. 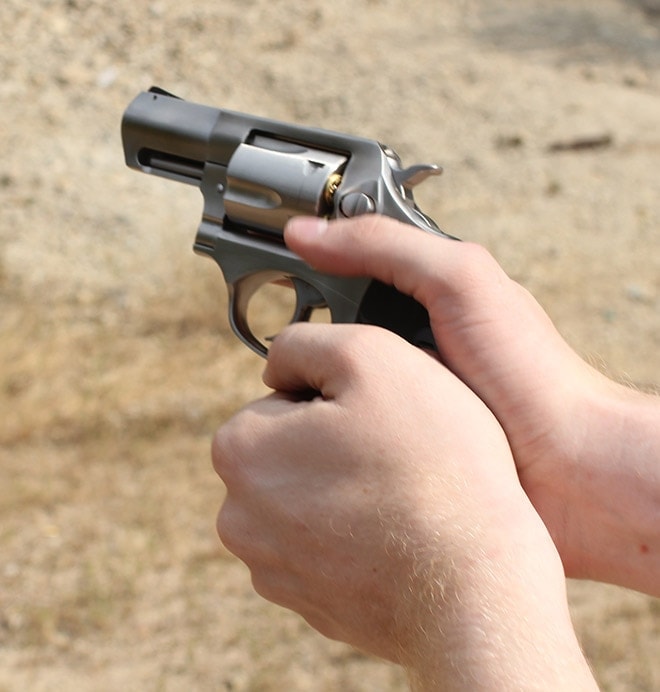 The ergonomic grips are my favorite feature on the Ruger SP101. (Photo: Nicholas Oetken)

The ergonomics on the SP101 are excellent.  I find the grip very desirable  —  something to look forward to on the range.  My pinky finger never hangs off the end of the grip in search of cover, and I can easily reach all of the controls without having to even slightly adjust my grip.  This cozy grip especially comes into play when shooting as it helps to cushion recoil.  In my opinion, the biggest thumbs up for the SP101 is its ergonomics, second only to its advanced and famed durability.

The SP101 presents a nice brushed stainless steel finish.  It’s not quite on the same pristine level as say a Smith & Wesson revolver, but even so it’s of very high quality and something Ruger can rightfully boast about given the company’s “workman” reputation.  The SP101 also sports two of Ruger’s standard revolver features: a transfer bar safety mechanism that is connected directly to the trigger, and a button on the side that releases the cylinder. 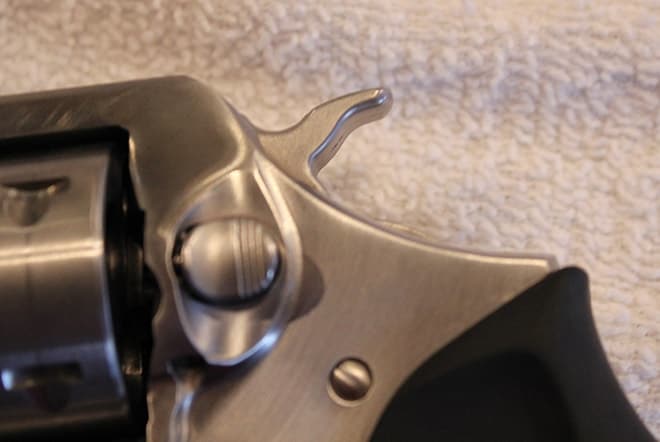 The hammer pull on the Ruger SP101 leaves something to be desired but not a dealbreaker. (Photo: Nicholas Oetken)

The biggest negatives about the SP101 for me are the hammer and trigger pulls.  Yes, the SP101 is as tough and resilient as we could ask for.  But pulling back the hammer or the trigger in double action is grittier than should be and leaves a lot to be desired.  This especially held true when I stacked the SP101 up against a Smith & Wesson Model 60, a gun on which everything moved flawlessly smooth right out of the box.  And while maybe not a fair comparison, I also recently tested a Taurus Judge .410 and judged (pun intended) its hammer and trigger pulls to be superior to the SP101’s as well.

The sights on the SP101 work but they are pretty basic.  I’m fine with this since if you’re armed with a snubnose revolver in a high stress situation, chances are you’re going to be point shooting at a distance of within seven yards.  Lowered sights also reduce the chances of snagging the gun when drawing, but there are aftermarket raised sights for the SP101 available if you want them. 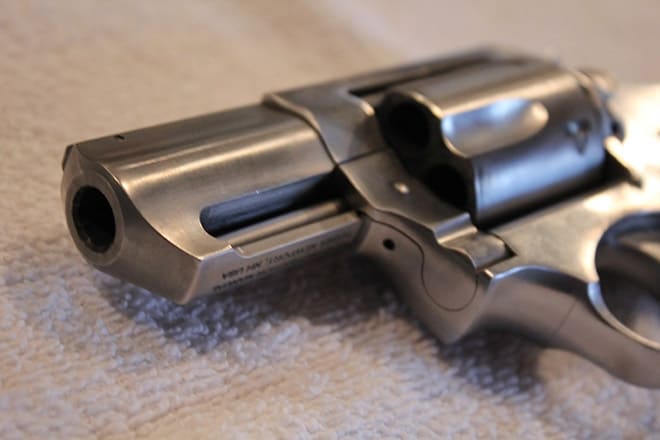 Recoil when shooting .38s is very tame and I can achieve decent accuracy despite the minimalistic sights.  You can’t exactly ask for precision out of a two inch barrel revolver, which are designed for up close contact encounters, but the SP101 delivers moderately tight groups at a distance of approximately thirty feet.

The recoil may be muffled due to the heaviness and first-rate grips but, as is to be expected, kick is significantly more noticeable when shooting .357 Magnums.  The recoil is also slightly less pronounced in the SP101 over the lighter Model 60, although the difference between the two is small and not a deal breaker for me. 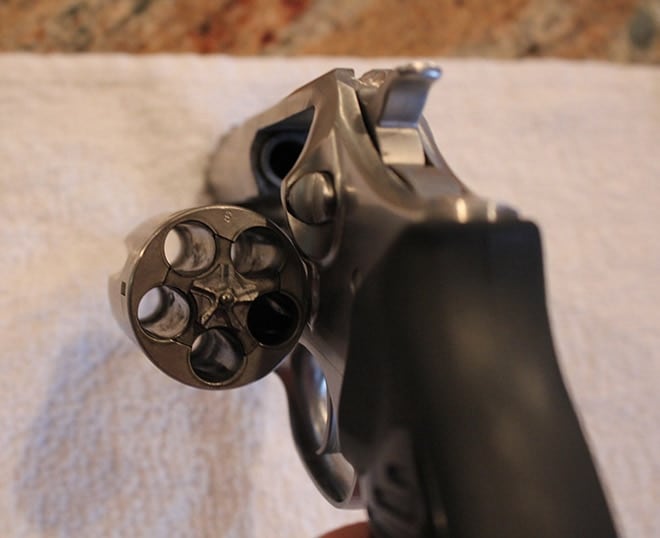 However, the primary advantage to the increased weight/durability in regards to firing the SP101 is not the fact that it yields lighter recoil, it’s the fact that the SP101 can handle more sustained firing.  With other lighter revolvers, after shooting through four to five cylinders nonstop the gun’s hammer, trigger, and cylinder release can temporarily tighten up due to heat and will need to be set aside for a few minutes to cool down.  Trust me — this has happened to me on more than one occasion with other revolvers.  Yet I was able to fire the same amount of ammunition through the SP101 without stopping and did not encounter any problems.  The gun was hot, yes, but it just kept shooting without any remote signs of an issue. 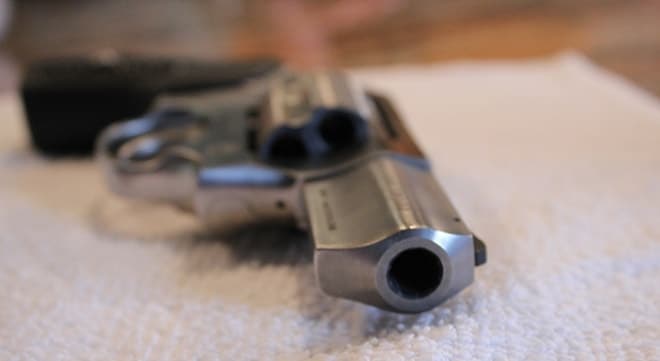 Though the small size and profile lends itself to concealed carry, its weight and bulk are not ideal. (Photo: Nicholas Oetken)

Snubnose revolvers in general have a reputation for being not fun range guns because of their snappy recoil.  The weight, solidity and comfortable grip make the SP101 just the opposite.  I’ve thoroughly enjoyed shooting this revolver for the hours of range time I’ve put into it — in fact, it’s probably the most pleasing snubnose revolver I’ve ever fired (once I forgave the rough hammer and DA trigger pulls).

All in all, the SP101 lacks the smoothness and superior finish of its primary rival, the Smith & Wesson Model 60, but it more than makes up for it with its noteworthy durability, superb ergonomics, and excellent shooting performance.  Even though it has less firepower than some would like at five rounds, this revolver will still make you truly protected for concealed carry purposes, as a car gun, or while traversing wilderness terrain.  The Ruger SP101 is likely as indestructible as snubnose revolvers will ever become and definitely the number one gun for you if you want Magnum power bundled tightly into a dense yet heavy duty revolver.