With a healthy family of 45 Auto 1911 pistols in their portfolio, Ruger is showing off a sleek young’un to the group with a lightweight Commander-framed 9mm SR1911.  Is the new pistol a target shooter, a competition gun, or built for concealed carry?  Guns.com finds out.

Like other semi-automatic pistols in Ruger’s SR1911 lineup, the 9mm version is a true 1911 frame, just offered in a smaller chambering.  Built as the lighter weight Commander-style frame, the SR1911 9mm weighs in at 29.3 ounces.  With a stainless steel slide, gray anodized aluminum frame and black rubberized grip panels, the pistol is sleek in its appearance and of quality materials for rugged use. 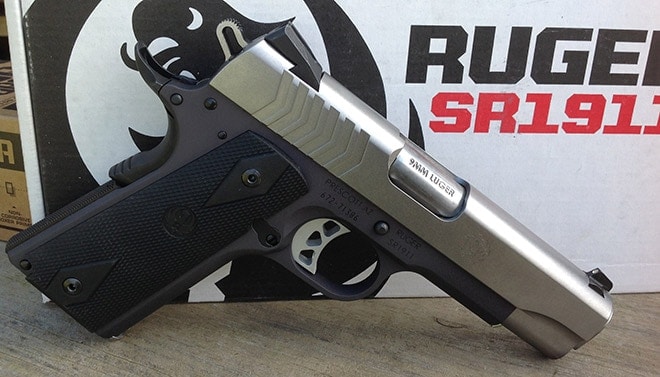 The 4.25-inch barrel wears a 1:10 inch RH twist and is topped with Novak LoMount Carry drift-adjustable three-dot white sights. A skeletonized aluminum trigger with an adjustable over-travel stop and positive reset is classy and clean. In a more custom-shop move, Ruger produces both the stainless barrel and bushing from the same bar stock, on the same machine, in an effort to offer maximum quality and accuracy. 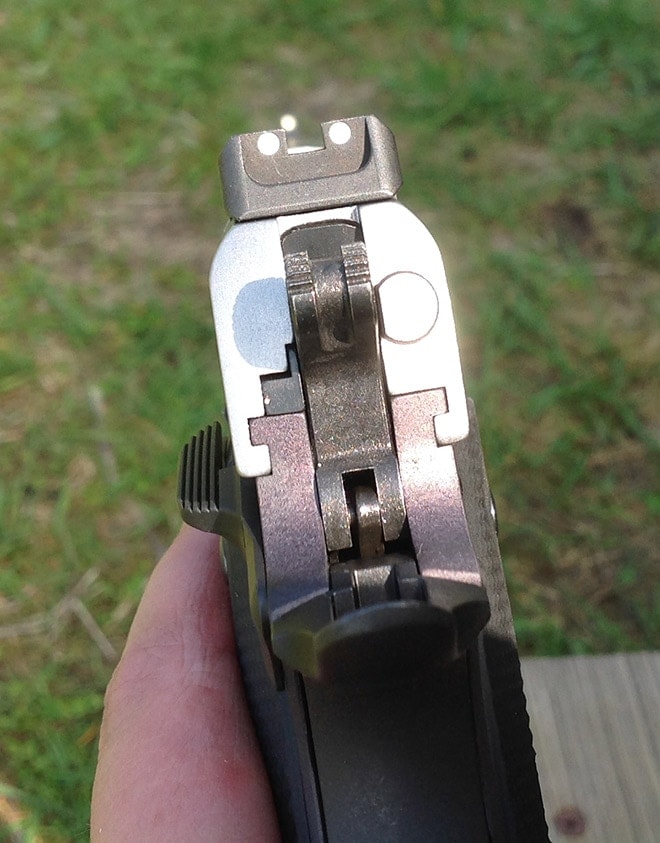 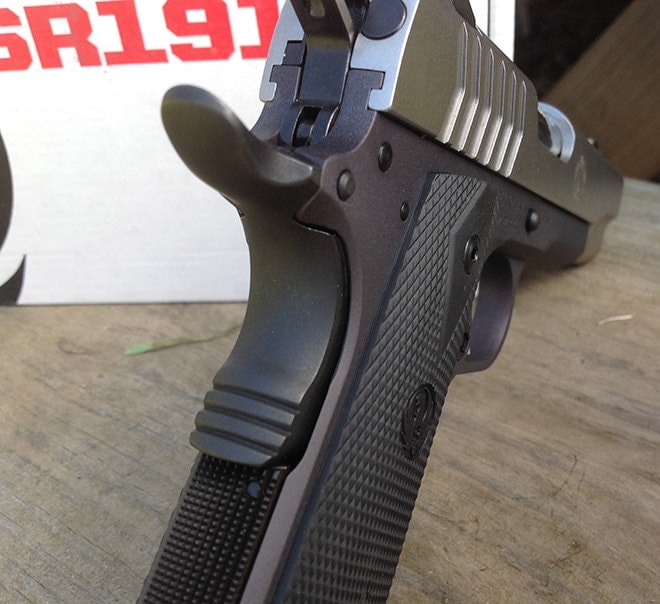 A titanium firing pin tops off the rig’s internals. An inspection port allows visual confirmation of a loaded chamber. In a move to attract competition shooters, Ruger has oversized the ejection port and fitted the gun with an extended magazine release. 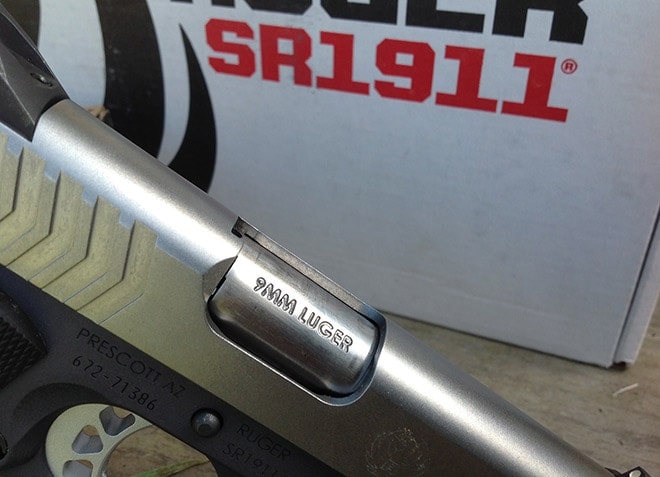 This is no 45. The 9mm SR1911 has all the same features as its bigger-bored brother. (Photo: Kristin Alberts) 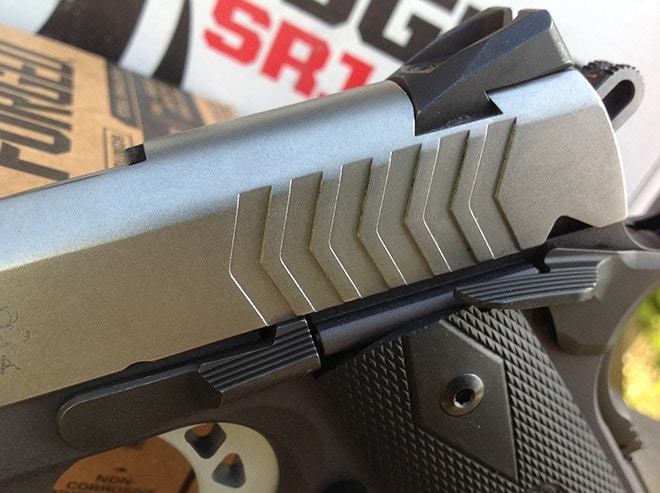 Our test gun comes from a full 1911 family of SR pistols including standard frame, commander, and lightweight commander, and target options in 45 Auto, with our pistol the only baby caliber on the line. The SR1911 comes packed in a Ruger-branded white cardboard box with two nine-round stainless magazines, a bushing wrench, and a company lock. Made in Prescott, Arizona, the new 1911 carries an MSRP of $979.00.  The price sounds steep, but this is a lifetime gun with plenty of features. 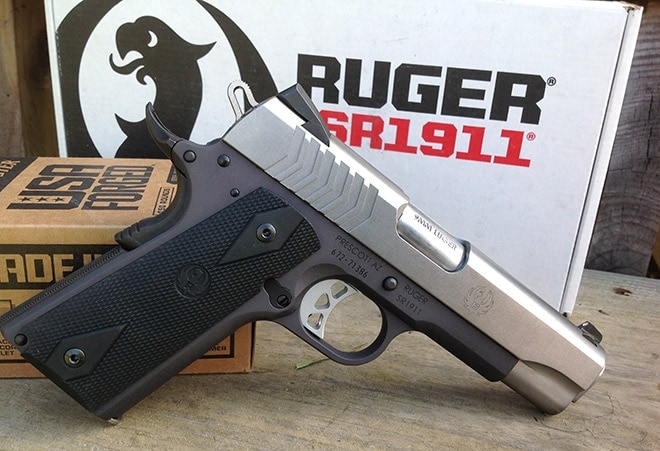 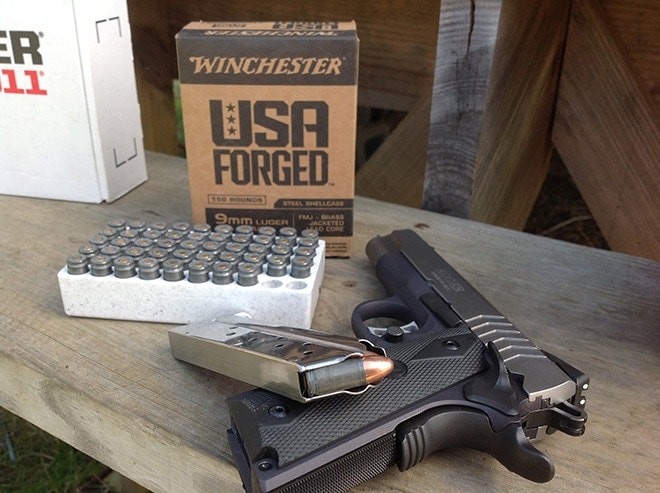 The gun feels lighter in the hand than its weight suggests, making it both at home on the shooting range for plinking and ringing steel as it is for a 1911 carry gun.  It’s even capable for those getting into the competitive pistol game. 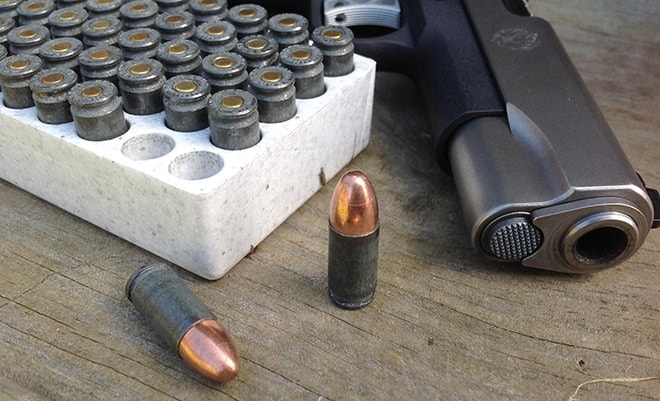 The extended thumb safety and slide stop are easy enough to manipulate, but controls are not ambidextrous.  Ruger claims their CNC-controlled machining process results in a “superior slide-to-frame fit” and whether that’s the difference maker, one thing is certain– the SR1911 is one smooth operating pistol.  The checkered backstrap offers adequate grip without being overly aggressive and rear slide arrow-serrations are much the same.  Feeding and cycling was 100% feed-fire-eject right out of the box, even with 250+ rounds of every kind of ammo we could find. 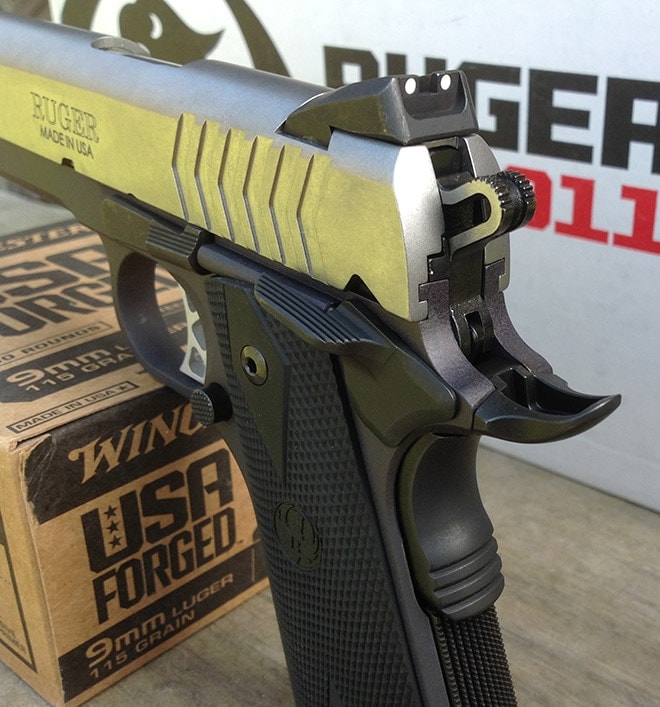 Hammer serrations are aggressive without being obnoxious. (Photo: Kristin Alberts)

Trigger pull is lighter and crisper than we expected on a 1911, with just a hint of creep at the onset of the pull, but breaking crisp and clean with a positive reset.  Another plus, because the SR1911 series — including our test 9mm — are designed around the original Series 70, they will accept standard aftermarket 1911 parts and accessories. The Novak sights are a nice compromise between target pins and lower profile carry sights. The oversized beavertail grip safety protects from slide bite and fits both large and small shooters’ hands well as we traded off firing time with the pistol. 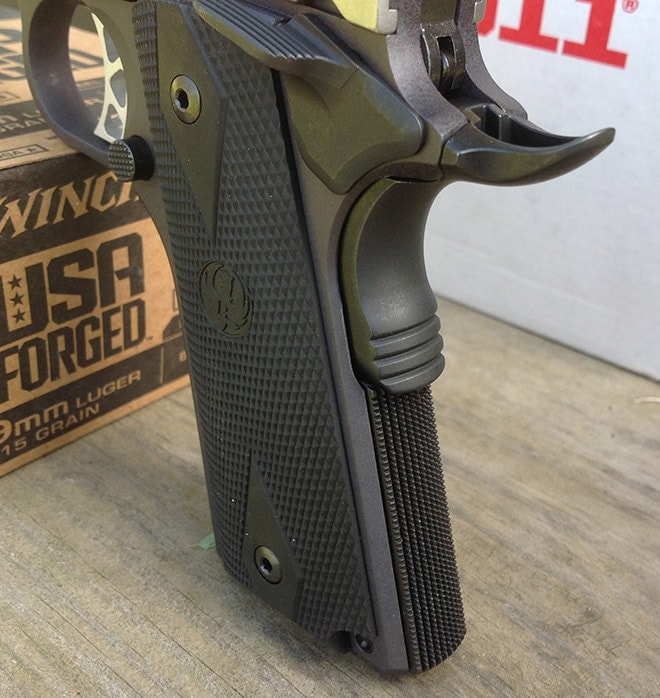 A standard 1911 grip frame will be familiar to fans of the design, while an extended beavertail protects from slide-bite. (Photo: Kristin Alberts)

Because of the quality sights and familiar frame dimension, the SR1911 9mm makes the steel sing, even for novice shooters. In fact, while many first time shooters cut their teeth with guns that are often too small, whippy, or light to truly enjoy firing, this pistol built confidence quickly for the new shooters with whom we shared the range.  I’m also pleased that Ruger’s new offering fits well into my carry holsters for the Springfield EMP nine.  And looks of the SR1911 are an understated, classy nod to the original with simple “Ruger” “Made in USA” on the left and a Ruger eagle on the right of the slide.  No book-length warnings or non-essential nonsense, just a clean unassuming pistol. 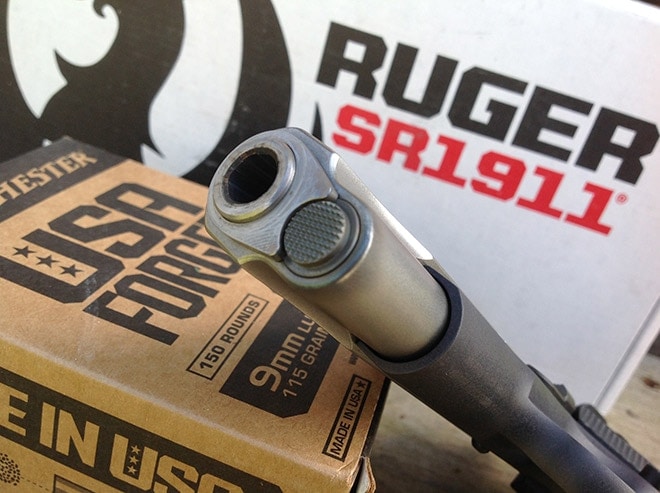 Muzzle detail after a day of firing. The SR1911 takes down like any other 1911 pistol. (Photo: Kristin Alberts) 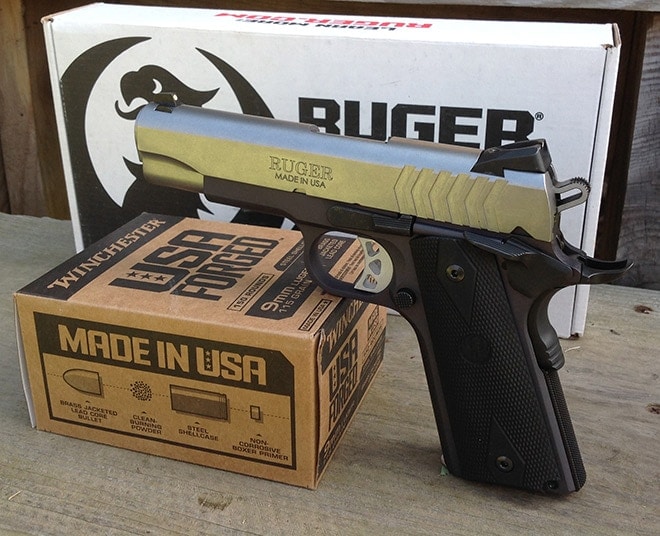 In the end, Ruger’s USA-made SR 1911 9mm pistol is a solid compromise gun that appeals to traditional 1911 fans, is a solid target gun and also a capable carry sidearm.  With Novak sights, a smooth skeletonized trigger, and stainless components, the Ruger is built to last and to please.  Shooters seeking one gun for both play and protection need look no further, as the SR1911 is one gun that really is a jack of all trades — plinker, competitor, and carry.