In 2011, the centennial year of John Browning’s timeless pistol design, the market was inundated with 1911s. It seemed like all of the companies that had not already made a 1911 joined the celebration by launching versions of their own.

Remington now makes a serviceable 1911 with very traditional looks.  Springfield Armory released reasonably priced tack driver—SR1911 is a Ruger, after all.  Ruger makes no-nonsense working-class firearms.  They are affordable, accurate, and will last forever if you take care of them.

I have a deep respect for the company, so I’m inclined to like what they do.  And the SR1911 is no exception.  It functions with the reliability I expect from Ruger and is backed by the Ruger Warranty.  That’s enough—but the SR1911 has something I don’t usually expect from Ruger: style.

1911 aficionados can be broken down into two basic camps.  Some like the martial look of the old fighting 1911, while others lean toward the flashy 1911s that tend to shy away from camouflage.  The stainless steel of the SR1911 would only be camouflaged on the set of Miami-Vice. 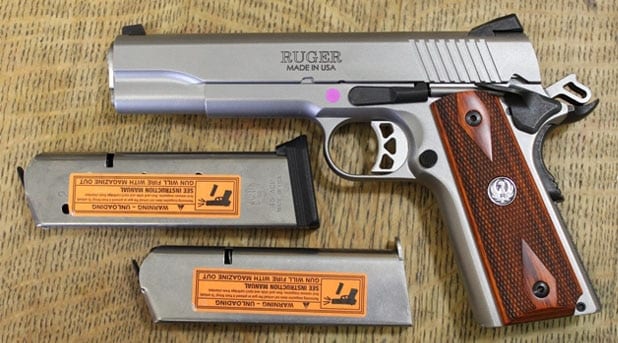 The frame and slide of the SR1911 have a nice brushed finish that Ruger calls “low-glare.”  This is a nice mix between flashy and utilitarian.  The brushed finish isn’t as prone to smudges and fingerprints as something that’s high gloss, though it collects carbon on the business end after a full day at the range.  It is more like the finish on most stainless refrigerators, and for the same reason.

Though the low-glare finish is functional, the aesthetics still take center-stage.  The gun is finished out with black accents.  The safeties, the backstrap, all provide that minute contrast that helps give the surface of the weapon a bit of contrast.

In keeping with the modern styling, the SR1911 has an upgraded trigger, a beaver tail grip safety, and a skeletonized hammer.

Which brings us to…

The SR1911is a series 70 style gun, which means it doesn’t have the firing pin block that allows it to be carried with the hammer down (if you’re into that sort of thing).  It has all of the other safeties of a traditional 1911, which is a bit of a surprise for a Ruger.  The company uses magazine disconnect safeties in their automatics that prevent the guns from firing if the magazines are removed from the guns.  But not the SR1911s—and Ruger has stickers telling you as much on all of their magazines. 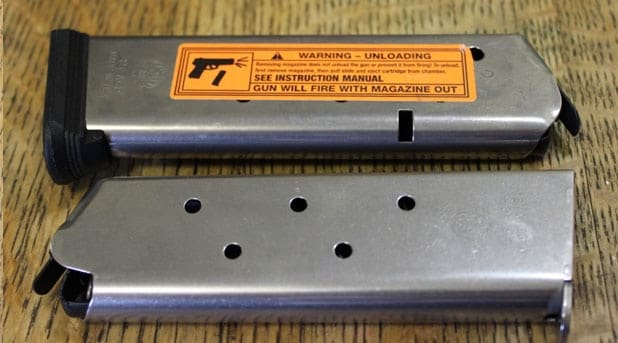 The magazines that come with the gun are stainless and well built.  One is the usual seven shot.  The other, the one with the small bumper, holds eight.  With a round in the chamber, that gives shooter eight or nine shots.  I shot the SR1911 with a mix of 1911 magazines by several manufacturers and all of them worked flawlessly.  The feed ramp allows for reliable feeding of any .45 ACP and it will eat up hollow points and ball ammo—no hitches either way.

The grips are a nicely checkered.  Ruger’s website says the grips are “hardwood,” which is a bit vague.  They look like glossy walnut, which looks like cocobolo—though if they were cocobolo, I bet Ruger would brag about it.  Regardless, the grips are nice—and fat.  The 1911 grip has a well rounded profile, perfect for big handed people.

The frames are cast.  The slides, which need to be a bit stronger, are milled.  The SR1911 is well built, though it has a bit of a rattle.  There are those out there who consider this an asset in 1911s built for everyday use, as the rattle implies that there is a bit of play in the parts.  Loose guns are supposed to be harder to gum up or foul.

This rattle is often blamed for the loose groups that most mil-spec 1911s shoot.  And I can’t refute that claim.  The SR1911 is a solid performer, but it isn’t a target gun.  It hits at point of aim—that’s what’s important—but I couldn’t get any groups under 2 inches at 25 yards. 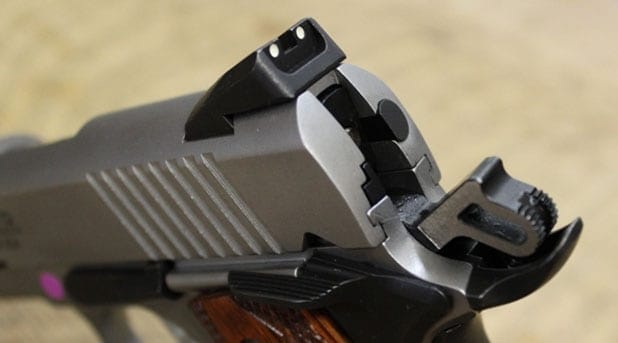 Don’t consider this to be a criticism.  For an everyday carry weapon, that is alright by me.  The SR1911 has nice Novak sights.  The three dot pattern itself is designed for rapid target acquisition, not pinpoint accuracy.  And they don’t drag in a holster.  Draw—aim—shoot.  That fast.

My best group came in at 2.1 inches.  I put at least 200 rounds through before I began to try my hand at target accuracy.  After ten groups of five rounds, I averaged about 2.4 inches.

I can live with that.  In fact, I would carry it.  But I would practice with one type of ammunition and get proficient with one brand, and one grain weight.  With fixed sights, on the SR1911 or any other fixed sight pistol, you’ll get different shot placement with different powder loads and different bullet weights.  Doesn’t hurt to practice with what you intend to carry.

Ruger entered the 1911 game right in the middle of the field—exactly where you’d expect Ruger to be.  The SR1911 sells has an MSRP of $799.  This is comparable to the Remington and The Range Officer.  This middle ground is really an amazing place to be.  The quality of these weapons isn’t on par with those from Dan Wesson, for example—but they’re noticeably better than the $500 low end imports. 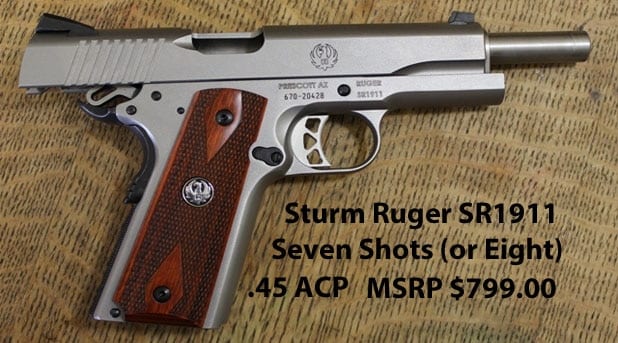 This seems to be Ruger’s specialty.  They make tremendous guns—reliable weapons—for those of us who want extraordinary quality without the heart attack that accompanies sticker-shock.  And they’ve done it again.