When Ruger released the SR1911 to help commemorate the centennial of John Browning’s masterpiece, blue-collar fans of the 1911 celebrated.  The SR1911 combined the dependability of Ruger’s factory guns with a 1911 design that is typically much more expensive.

To start, they are stainless steel, the sights, hammers, firing pins, triggers, grip safeties are all improved over those of the lower priced, often imported 1911s.  Yet the price, $829, is well under what many expect for a gun with extras like these.

Rather than monkey with success, Ruger has opted to expand the line with a shorter version of the same gun.  The SR1911 CMD is almost identical to the SR1911, but it takes into account the simple fact that many people still want to carry a 1911.  And the Commander length versions of the 1911 are great for concealed carry. 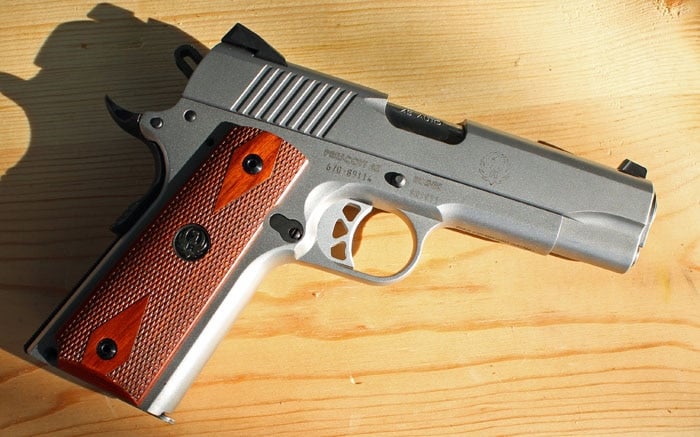 At first glance, the difference in length is hard to see. (Photo by David Higginbotham)

The Commander, at least is its original inception, was the solution to a perceived problem.  The 1911 was a solid pistol with a proven track record, but in the 1950s, the Army decided it wanted a smaller, lighter pistol for officers.  And they wanted it in 9mm.  When the trials opened, Colt submitted an  aluminum framed 1911 in 9mm with a shortened barrel.  Later versions of the gun were chambered in .38 Super, and .45 ACP.  As the line evolved, versions were available with steel frames.

Depending on the materials of construction or era of production, the shortened 1911s are reduced to three basic groups: Commanders, Lightweight Commanders, or Combat Commanders.

Ruger’s complicating the issue by releasing an homage they’re calling the SR1911 CMD.  But we know what they mean.  The CMD takes its origins and measurements from the steel framed Combat Commander.  The accoutrements, though, are all more common to the last 10 years of semi-custom factory 1911s. 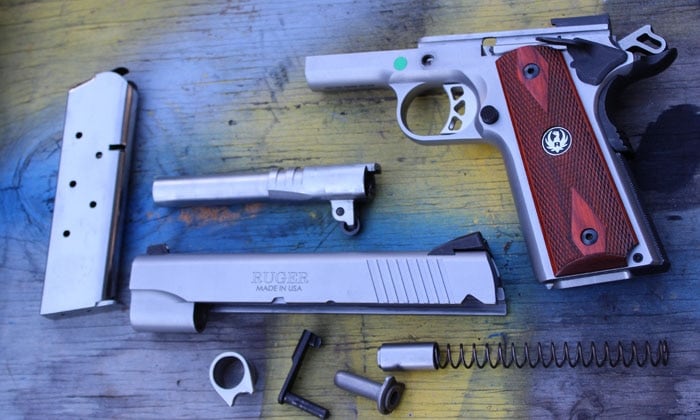 The basic parts of the SR1911 CMD. (Photo by David Higginbotham) 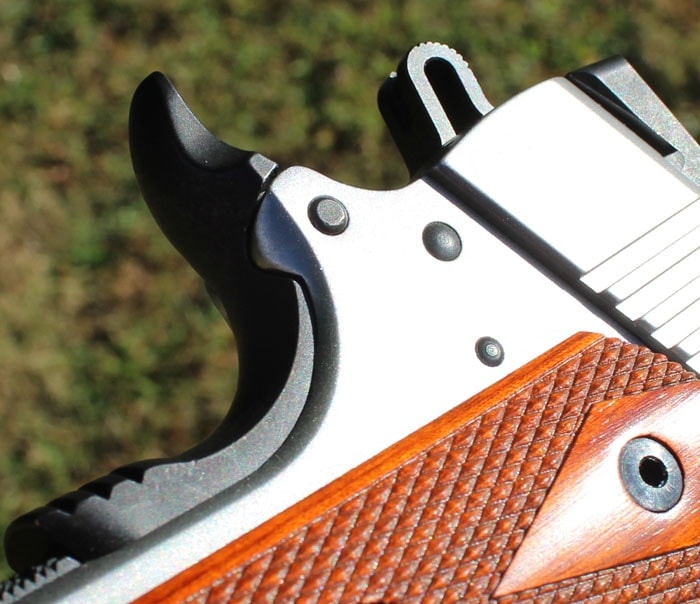 The grip safety has a nice beaver-tail. (Photo by David Higginbotham)

The SR1911 CMD ships with  7+1 round magazines.  The length is reduced by less than an inch to 7.75 inches.  Like the full-sized version, it is 5.45 inches high.  There is very little difference in the weight.  The SR1911 CMD is 36.4 ounces.  The barrel is cut down to 4.25 inches.  Both of the guns are 1.34 inches wide.  There is at least one other noticeable difference.  The guide rod and spring are shortened.

The other defining features are similar to the SR1911.  The gun does away with the firing pin block by relying on a lightweight titanium firing pin that passes drop tests.  The Novak 3-dot sights are very easy to see.  The trigger is adjustable to take up any over-travel.  The magazines are stainless and very well made.  The back-strap is steel and highly textured.  The beaver-tail grip safety makes handling reliable and comfortable. 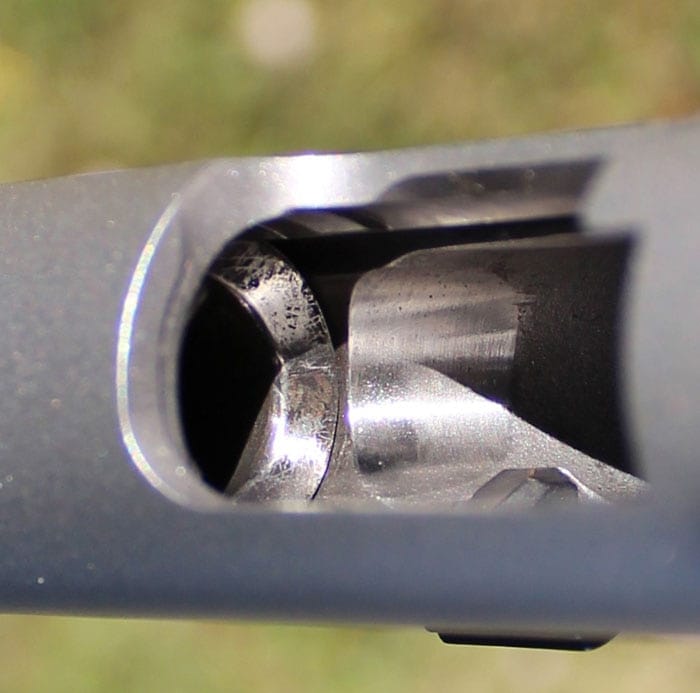 The feed ramp works well with most ammo. (Photo by David Higginbotham)

Don’t carry this gun with flat nosed bullets.  I’d go so far as to caution against conical hollow-points that have straight sides.  Find something with a curved, convex shaped bullet.  The flat nosed variety jam up in the top of the slide and catch there.  The jam it creates is solid.  No movement.  No amount of forward assist will unseat the little bastards.  There’s nothing to do but pull back the slide and shake it free (as the extractor hasn’t seated on the rim yet in that position).  It is a pain in the ass and a big hassle.

It is also a great training tool.  As much as we like to preach perfection, guns will jam.  When they do, you have to clear the problem.  It is hard to train for.  I’d suggest trying out some flat nosed bullets while you’re at the range, just to build in that reflexive action of clearing a problem.  But find a hollow point that mimics the shape of ball ammo.  Hornady’s Critical Defense for example.  Ideal.  The slight protrusion of the plugged hollow-point is all that’s needed to guide the nose into the barrel.

Once you have a round loaded, you may notice a slight variation in balance.  The shortened barrel handles differently.  I watched a couple of shooters have the same experience I had.  I’m trying to contextualize this effectively and it is hard.  I wasn’t shooting high, exactly.  But the point of balance is farther back.

Recoil is a bit sharper.  With almost an inch off of the available sight radius, in addition to the sharper recoil, and an odd balance point, the Commander sized 1911 takes some getting used to.  After the first few magazines, though, I wasn’t having any issues.  It may be anecdotal, but I wasn’t as fast with the SR1911 CMD as I am with other 1911s.  Drawing is faster, or as fast.  Sighting in isn’t a problem for me, which means the first shot is going where I intend.  But I’m not as fast on my split times.

The sight radius is a bit shorter, though it is hard to tell from this end. (Photo by David Higginbotham)

Accuracy did seem to be a problem at longer distances.  As this isn’t a target gun, we didn’t do much bench testing with it.  Instead, we ran the gun on steel plates.  Five at a time at varying distances.  The 10-inch plates, at anything over 21 feet, often required a follow up shot.  It was frustrating. 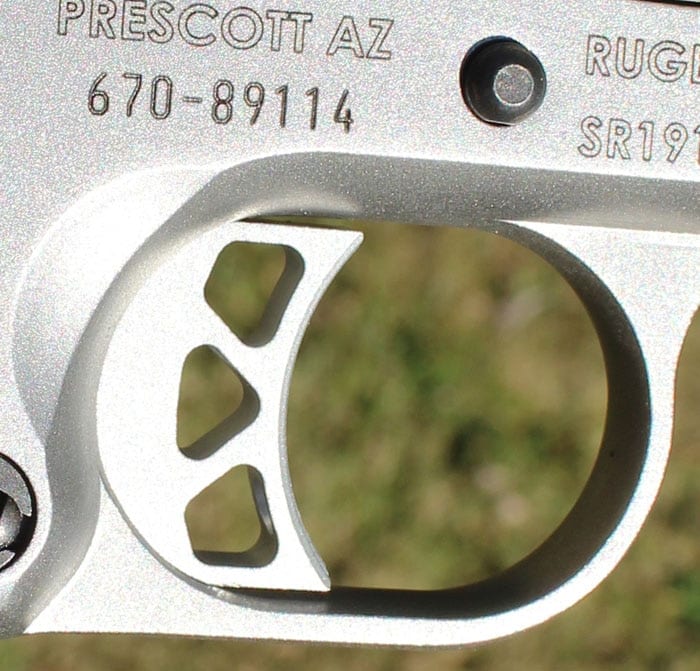 The SR1911 has a great trigger for a factory gun. (Photo by David Higginbotham)

The range where we were shooting has big clay berms.  When we missed a plate, the dust from the berm kicked up showing exactly where the shot hit, and it was always very close.  We were shooting fast, and changing the placement of the plates, and (unless we went slow) we needed six shots to make five hits.  That isn’t to say that the gun isn’t capable.  At any point, on any of the plates, at any of the variable distances, we could make very accurate shots.  What was the difference?  More than anything, I think, it has to do with how accustomed we all are to shooting bigger 1911s.  User error.  And the only way to remedy that is through practice. 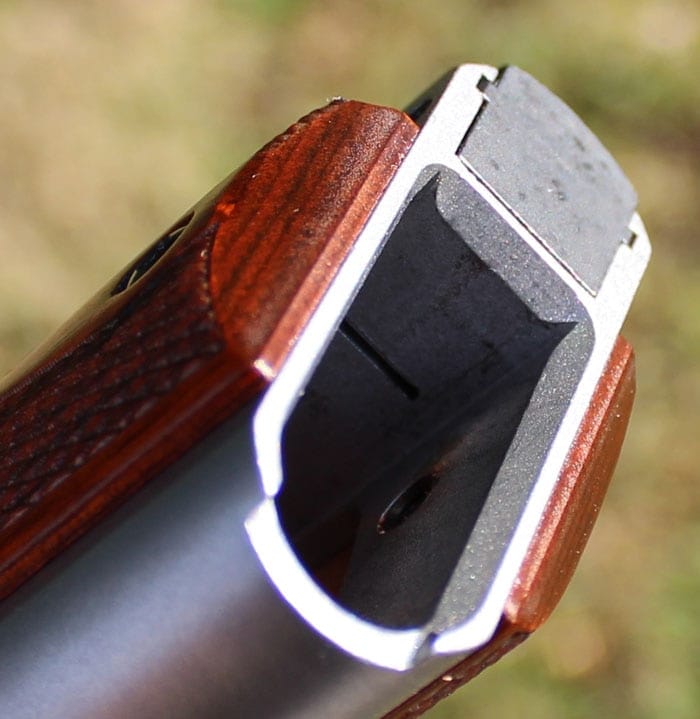 A slight bevel on the mag well helps with reloads. (Photo by David Higginbotham)

If there is one way that the CMD outshines the 5-inch 1911, it is shoulder holster carry.  Depending on the size of your frame, a full-sized 1911 is going to poke out a bit.  IWB carry is complicated by the length of the draw.  Think wild-west here.  The old school revolvers had super long barrels.  As the need for speed overshadowed the need for range, shooters cut down their pistol barrels.  The logical end is the 2-inch snub-nosed .38.  The CMD isn’t that easy to carry, but the extra inch may make the difference.

If given the choice between a SR1911 and a SR1911 CMD, I will take the shorter one.  It is, for all practical purposes, just a shorter version of the larger gun.  Even though that reduction in length is negligible, you never know when having the advantage of complete concealment might be an advantage.

Price for this rock-star?  MSRP is $829.  There’s been a lot of fluctuation recently.  As supply begins to meet the insatiable demand, the pistols should easily settle out at $800, or a bit lower.  At that price, this is an unbeatable 1911.  There’s so much that’s already done to this gun that it won’t need any modification for daily carry.  It is good to go right out of the box.  Just don’t feed it any flat nosed bullets.