Ruger’s Mini-14, a platform which is proven dependable in .223, has been adapted into a tactical model, chambered in .300 AAC Blackout, AKA 300 BLK (7.62 x 35mm).  It’s a great idea—one that, following this test, I think might still need some work before being an optimal choice for fans of either the Mini-14 or the 300 BLK cartridge. 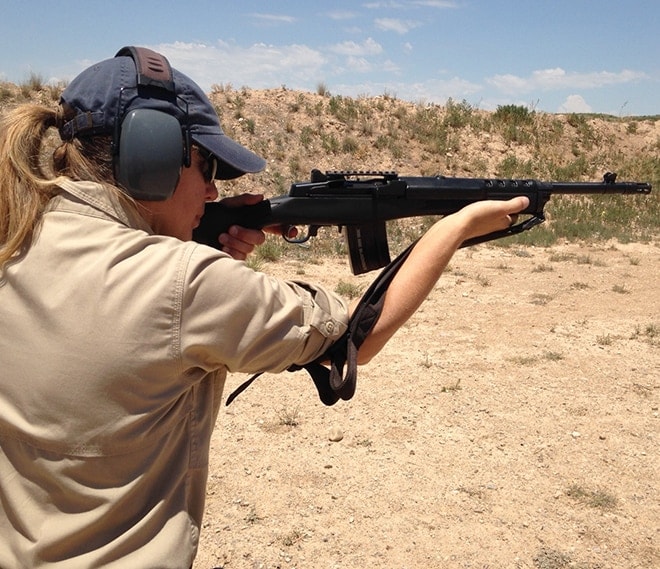 The rifle ships with a generous complement of goodies—a set of scope rings (hopefully they fit your optic), hunting-style sling attachments, an extra magazine, an optional section of picatinny rail, and a handy allen wrench to attach the rail. The items are all packed into the rifle box inside a series of cardboard compartments that appear to have been designed by origami artist.  Once I took everything out, I never did manage to get it all back together as neatly packed as when it arrived.

In the looks department, this rifle in this test has got it going on. Ruger combined the classic lines of their ranch rifle with modern touches of an all-black finish, a flash suppressor, adjustable military sights, and the optional rail.  It’s not (yet?) available with the folding stock to be a full-on tactical as is offered in the Mini 14 in standard .223 caliber. It’s 36.25 inches long overall.  The weight is an easy-to-tote 6.75 pounds—just like its .223-caliber predecessor. 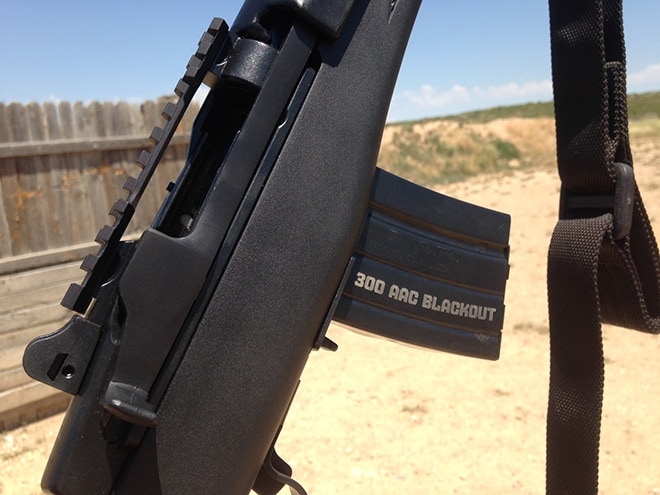 The two black aluminum 20-round magazines that shipped with the rifle performed well. On this otherwise subtle package, the mags are white-stamped “300 AAC BLACKOUT.” It’s not overdone and, I think, enhances the rifle’s appearance.

Enough about appearance, let’s talk about handling.  This rifle retains the traditional Mini 14 pin-style bolt lock, which for new operators of this model is a fine motor skill that may take some getting used to. Other than that, it proved comfortable to handle for both a six-foot-plus shooter and my 5-feet-five-inch self.  Recoil is minimal, about the same as a .223.

The trigger is just right for a varmint and battle rifle intended for medium ranges out to around 460 yards. Its pull is fairly smooth; the reset’s not excessively long.  Though I didn’t measure the weight of the pull, I’d describe it as “milspec medium;” this copy was definitely not the heavy seven pounds another review shows. Though it’s trendy to drop match triggers into battle rifles, in my view this one’s safer without being sloppy for field use. 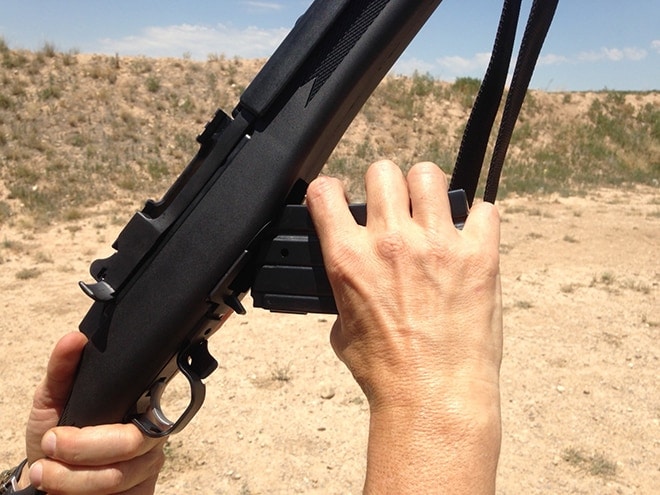 The 20-round magazines aren’t tricky to fill.  Insertion and removal into the rifle is typical for a box style magazine, which is to say it requires a little practice.  It’s made to be inserted with a front-to-back rocker motion, akin to loading an AK. The mag release lever is located just forward of the mag well, facilitating operation by either right- or left-handed shooters.

A rear aperture sight and iron post front sight facilitate combat accuracy within reasonable distances.  Like any other battle rifle, adding a red-dot optic would speed up target acquisition. A magnifying optic would be the optimal setup for longer distances.  The approximately 4-inch rail limits the options for optics to those of the compact variety, as well as limiting eye relief adjustments. Limitations aside, the rail is an attractive and useful update to the original Mini-14 platform. (There’s a rail pic, which may be too much like the mag-loading pic above) 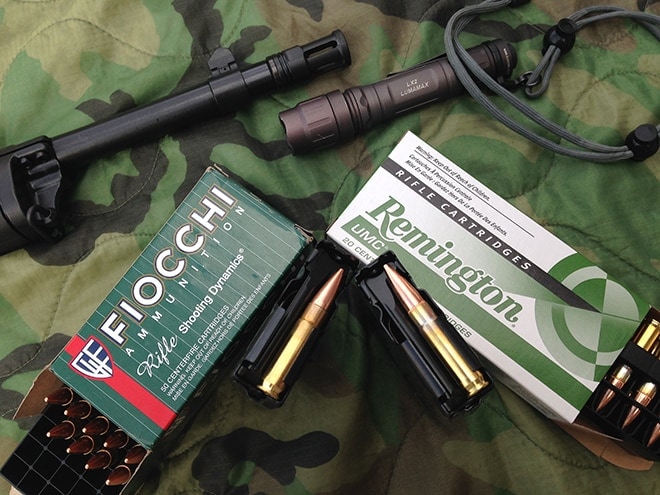 Where an update would be welcome, but has not been done on this model, is to the safety lever.  Like all Mini-14s, disengagement requires inserting a finger into the trigger guard. It’s unwieldy to operate with gloved fingers, and while safety is ALWAYS the responsibility of the operator, not the manufacturer, the old-fashioned safety is more difficult to disengage than many available today. That being said, it’s ambi-friendly, and as a lefty, I probably shouldn’t complain.

Using an improvised bench with open sights at 50 yards, the rifle shot groups no greater than four minute-of-angle.  Without adjustment out of the box, groups were right of center, but that is easily adjusted.  Accuracy is typical for the Mini-14 series as well as acceptable for the intended use. 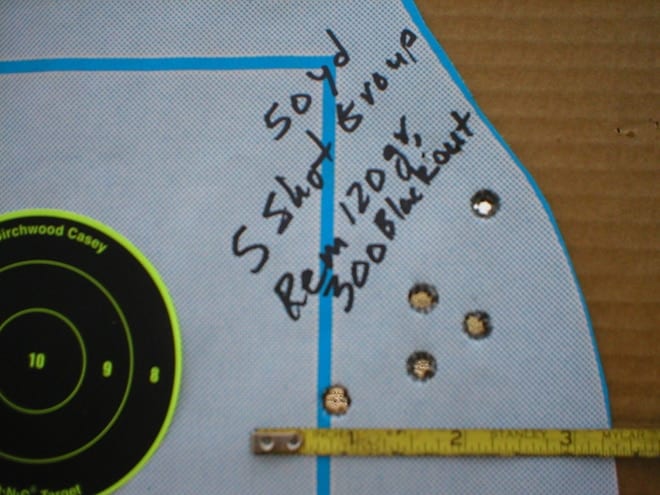 Testing was done with supersonic ammunition.  Given the additional cost of subsonic ammo and lack of access to a suppressor for this gun, it seemed the thing to do.  Certainly, much of the appeal of this caliber is the availability of subsonic .300 Blackout at a time when the popularity and availability of suppressor use is on the rise.  While I provide and purchase much of my own gear to conduct tests, a suppressor in this case was a bit more than I’m prepared to fund.  There are surely other reviews of this model, suppressed, available online. 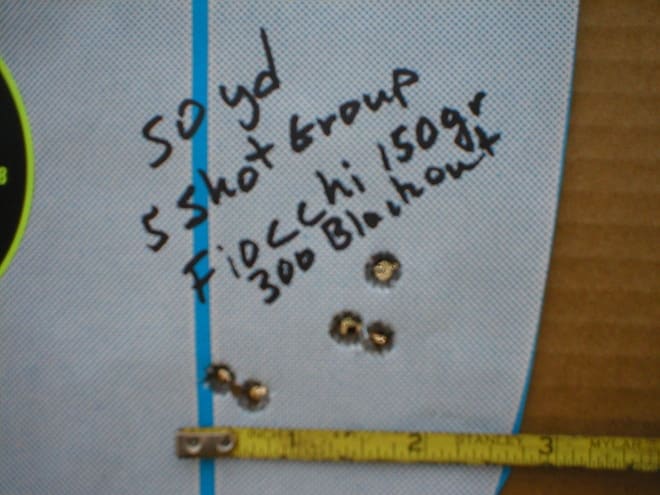 Ammo price will be a consideration for some who are considering any .300 Blackout rifle.  Standard ammunition in this caliber averages approximately $1.10 per round, tax/shipping included.  Add another 20 cents per round for subsonic loads.

Another shooter who used Hornady ammo in this same model said his new gun functions fine, though I didn’t have the opportunity to see for myself.  This copy, with readily available Remington 120 grain and Fiocchi 150 grain, both within recommended weights for unsuppressed use, had some serious firing problems. 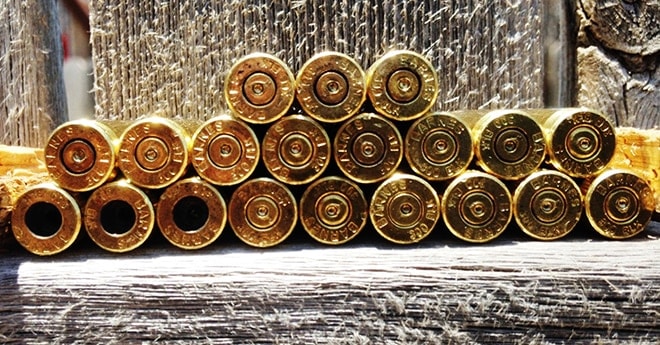 Primers blew out entirely, in some cases lodging in the bolt face and partially disintegrating in the ejection port.  The bolt would then not fully go back into battery. This caused a variety of misfeeds. As it became evident that this was a real problem, we fired a series of both brands and counted the number of blown primers. Nine of 21 (43 percent) of Fiocchi rounds and three of 20 (15 percent) of Remington cartridges were missing primers after firing.  On a couple of these occasions, primer material (metal, not the explosive compound) was flaked along the length of the ejection port. The risk at this point seemed too great to continue. 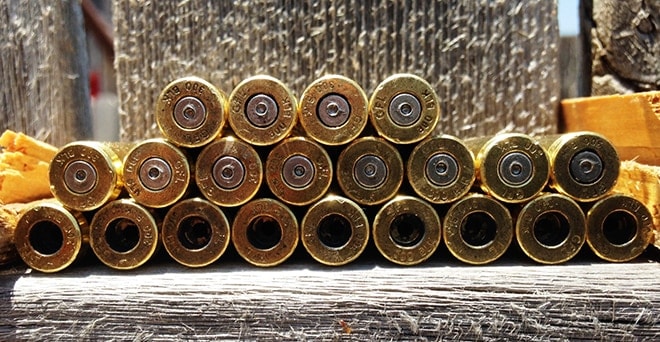 Following the range test, I searched online to see if this problem has been experienced by other Mini-14 300 BLK users, or if this experience is unique.  In a matter of seconds, other blown primer stories were found for this same model.  Most owners blamed ammunition, however none cited having corrected the problem with any specific brand or grain weight.  Consultation with a long time industry expert revealed another personal experience with this problem and this model. 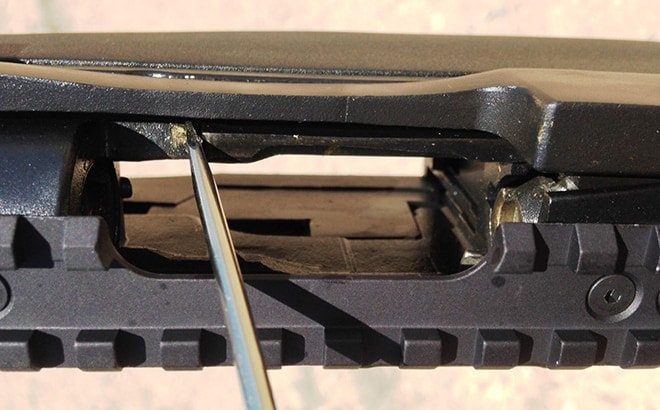 This article is the best resource I found on the topic. According to that author’s research, blown primers associated with ammo issues typically leave behind sooty residue.  That wasn’t the case here—other than actual shavings of the primer itself, there was no residue in excess of what one would expect from simply firing the gun. A handful of other potential causes are given, all related to excessive pressure.  Among them are too much headspace, a too-tight chamber or bore, a too-long firing pin, and even too-high ambient temperatures. This test was done in temps around 90F, not considered “hot” in the summertime here in the southwest. 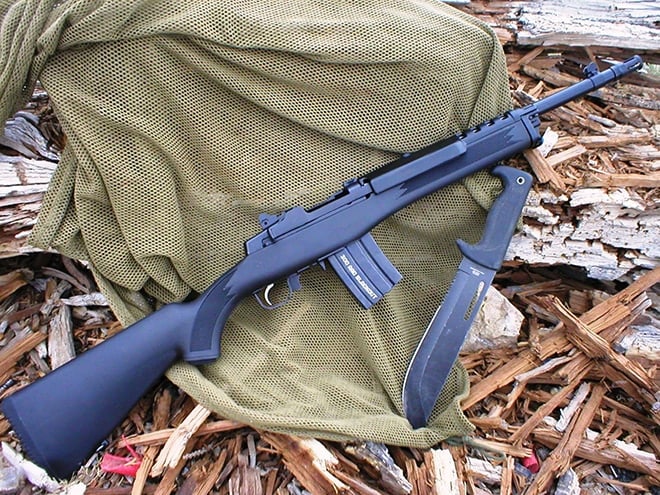 I inquired with Ruger representatives about this problem.  Direct comment on it was never rendered.  Eventually, factory inspection of the gun was offered, which I declined, opting instead to return it. Of course before shooting, and again before contacting Ruger, I consulted the owner’s manual, which is a loose page inserted in the standard Mini-14 manual. It offered no insights. The suggested retail price of the Ruger Mini-14 Tactical Rifle chambered in 300 BLK is $1,019.  Most actual prices online as of this writing are in the $700-$800 range, not including shipping/FFL fees.

The emergence of the .300 BLK load, along with its rise to popularity among, I’m guessing here, shooters seeking more oomph than .223, has been interesting to observe. It seems to this reviewer that Sturm, Ruger & Co. were in too much of a hurry to get on the bandwagon.  The otherwise attractive Tactical Mini-14 will have mass appeal as mid-range rifle if and when it’s proven to dependably function with average commercial ammunition.