Gun Review: The Ruger Tactical Takedown is the perfect 10/22

There is a growing trend in the industry.  More and more companies are making guns with threaded barrels.  Ruger’s been doing it for a while, so it isn’t really news, but occasionally a company will really nail a design and combine all the right elements into something that seems meant to be.

The gun comes in two variations, now.  The old Takedown is a fine gun.  But the new version is even better.  The main difference is the threaded barrel.  But that one addition makes this rifle much more appealing.

The Tactical Takedown’s overall length is just over 3 feet.  The barrel is 16 1/2 inches,  The gun has a modest length of pull: a touch over 13 inches.  It weighs just over 4 1/2 pounds empty.  The stock is synthetic and the barrel is a blued alloy that’s almost black.  The gun ships with one magazine (a ten round box), and it has a section of rail that can be screwed to the top of the receiver.  And it all comes in compact black bag. 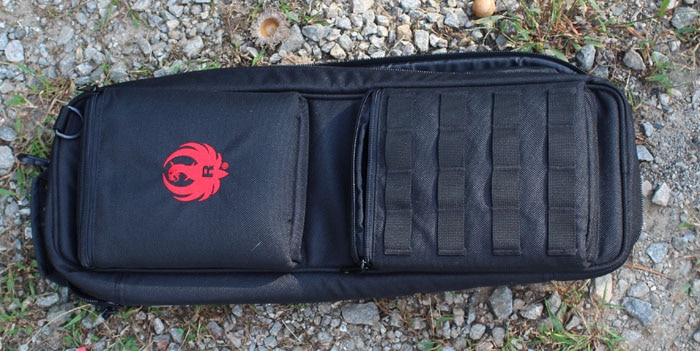 If I have one gripe about the 10/22 line, it is that the compact gun can’t decide if it is a youth rifle or not.  As much as I love the rifle, and I do love it, I have to get all squished up to shoot the thing.  But I’m tall.  And it still works.  I guess I need to find an aftermarket stock that will let me stretch it out. 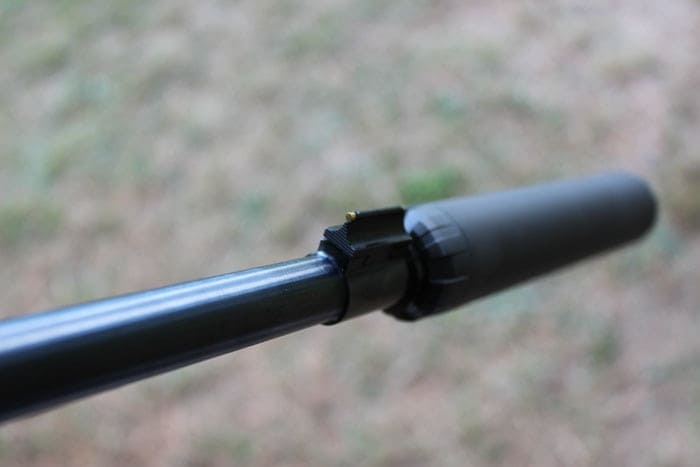 The front sight is a tiny brass bead on a ribbed black post.  I’ve always liked the size of it.  It works very well for me.  The back sight has two wings with a notch in the middle.  With the brass bead in the notch and the notch covering your intended target, the gun is very accurate. 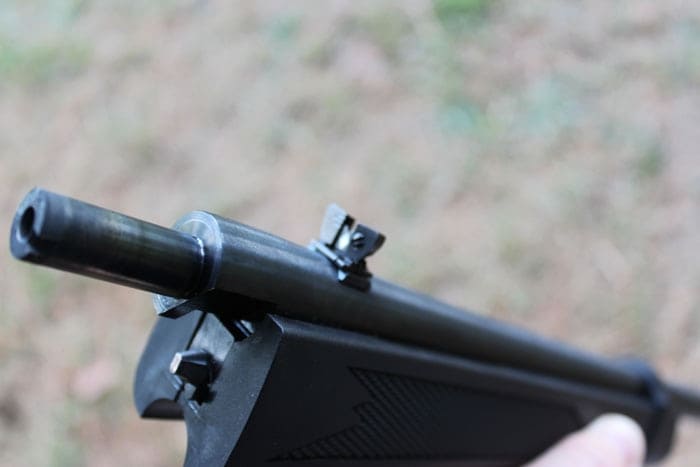 With other 10/22s, the front post is lower.  I have one that is set up to shoot pumpkin-on-a-post, which is my preferred set up for rimfire (as I can see the whole target, and see where the bullet impacts).  But the height of the bead on this rifle is meant to clear a silencer, so that set up is much harder to attain.  As such, the sights end up covering a bit more of the target than I’d like.  But I can live with it.  It will only take more practice for me to get used to it. 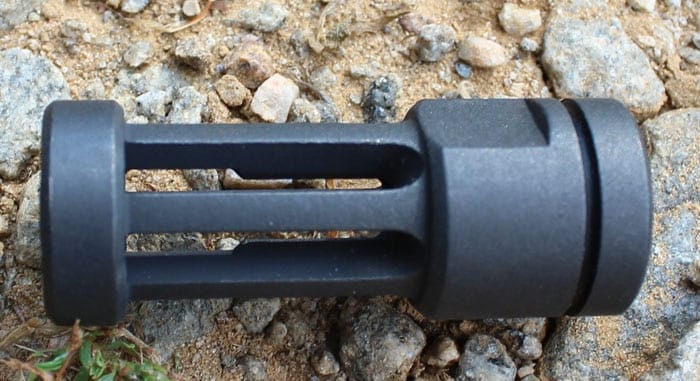 And I do like using the rifle with a silencer.  It is a delicate balancing act, though.  The .22 LR rounds in the 700 fps range are silent, but won’t cycle the bolt.  No problem, really.  The rifle then becomes a straight pull bolt action.  But you have to tip the rifle to the right when you cycle it to clear the chamber.

Normal .22 will cycle the bolt, but they also make a really sharp crack that can wear on your nerves after a while.  But it shouldn’t damage your ears.

The Silencerco Sparrow is an ideal choice for the 10/22.  The can, which sticks out noticeably on a pistol, blends in naturally on the rifle.  And the broken down barrel and stock come out close to the same length.  But if you don’t want a silencer on the gun, it comes with a “flash suppressor.”  Ornamental?  Yes.  Let’s be honest about it.  This is more of a thread protector than a flash suppressor or muzzle break.  But it adds to the tactical look.

The gun comes apart very easily.  Slide the bolt back, lock it in place and move the switch.  Twist and pull.  It separates into two clean halves.  This makes storing the gun very easy.  It fits in a pack very well.  It also tucks neatly into the often unused space of a gun safe. 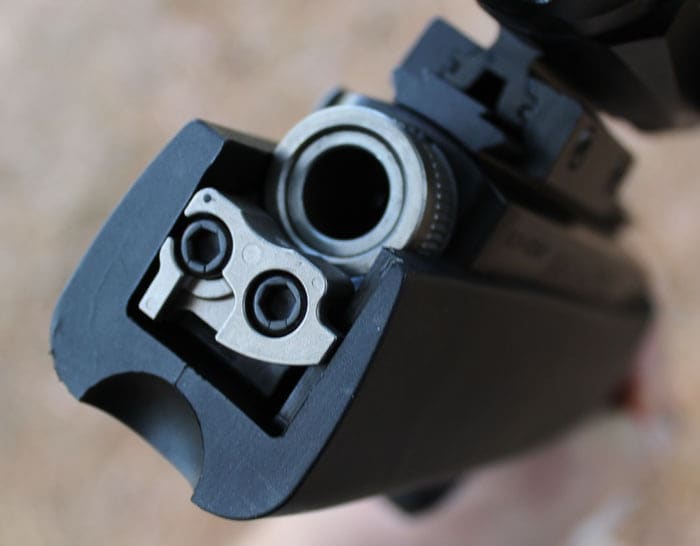 To assemble the rifle, simply position the receiver and barrel together at a slight slant.  Twist it together and it locks firmly in place.  Once both ends are together, they don’t move much.  A good wrenching twist will show some slight play, but there’s no accuracy lost in the connection, as both of the sights are fixed to the barrel section.  After a bit of practice, you can put the gun together in under 2 seconds.

The 10/22 is known for its reliable accuracy.  You can buy much more expensive rifles.  You can buy very expensive rifles and have ammunition custom matched for the peculiarities of your rifle’s barrel.  That’s not what we’re after with a 10/22.  The accuracy I’m talking about isn’t measured in inches, exactly.

The 10/22 is a plinker.  With the iron sights, this rifle (even with its comparatively short barrel) is surprisingly accurate.  When I was sighting it in, I picked up pieces of broken clays and set them in the grooved bark of an oak tree.  Some were as small as a dime.  From roughly 25 yards, with CCI Mini-Mags, I could dust them all.  It was easy. 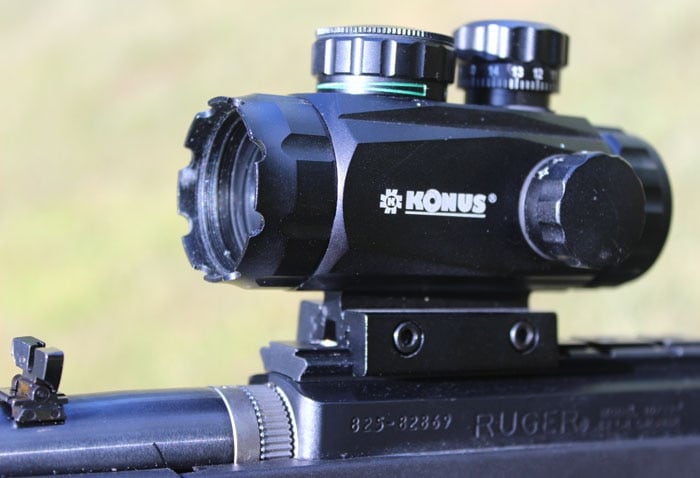 That’s what I expect from the 10/22.  I’ve never shot one that wasn’t capable.  Because they are semiautomatics, the 10/22 is fun to shoot fast, too.  I’ve had this Konus SightPro for a while now, and nothing to put it on.  It is a nice option for rimfire plinking, even if it is a bit bulky.  The optic makes emptying the 10/22 on a steel plate much faster.

I’m going to risk it and say that this is the best version of the 10/22 I’ve ever shot.  The short barrel makes the already short rifle very maneuverable in the woods.  The take-down feature makes carrying and storing the rifle much less complicated.  The synthetic stock is indestructible.  The gun’s overall weight makes it an ideal gun to take with you, even on longer hikes.  The threaded barrel  means you can use a silencer without having to pay for a gunsmith to customize your barrel.  The use of the silencer means you can teach others to shoot without having to worry about yelling through headphones.  Even the most noise averse new shooters respond can handle subsonic .22 when it is silenced. 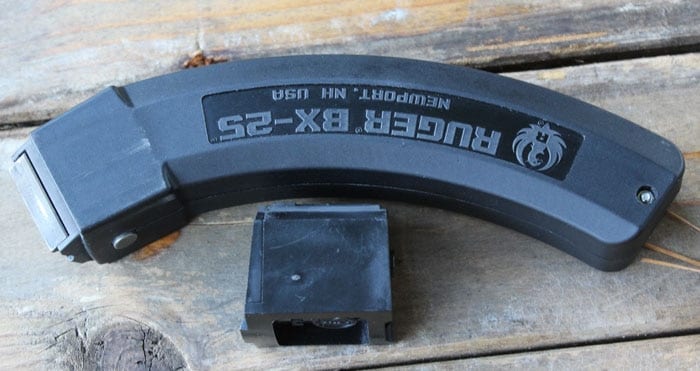