Gun Review: SAR 9 by Sarsılmaz is a 9mm worth noticing (VIDEO)

At SHOT Show 2017, an impending product release caught my eye—the SAR 9, a striker-fired 9mm pistol from Turkish aerospace products producer Sarsılmaz. I was fortunate to get my hands on one of the first 50 copies in the US via Illinois office of UTAS Defense, a Turkish company.

The SAR9 is a polymer frame pistol with a 4.4-inch “alloyed forged steel barrel and slide,” according to a company spec sheet. It comes with two metal-body magazines, with polymer floor plate and follower, of 15 rounds capacity. The overall length is 7.5 inches with a height of 5.5 inches, and 1.4 inches in width. It weighs 27.1 ounces unloaded. Safety devices include a trigger block and thumb-operated safety lever. The latter is located on both left and right.

The SAR 9 comes with two 15 round magazines and additional grips. (Photo: Eve Flanigan)

SAR 9 sports an adjustable three-dot sight setup. As of this writing, it wasn’t clear whether the sights are interchangeable with popular aftermarket brands. A non-gloss blued finish and black polymer make this an all-black firearm. UTAS USA says a stainless two-tone model will follow, but has yet to receive one from the factory. The pistol is shipped with two magazines and three sizes of grip panel inserts. The inserts fit onto the backstrap and sides of the grip, and will look very familiar to Heckler & Koch VP9 owners.

Also in the hard plastic, padded case are two cleaning tools, a steel punch for the grip inserts, and an Allen wrench for sight adjustments. Ergonomic niceties are many on this handgun. There are slide serrations fore and aft of the ejection port. The grip is lightly textured, but the fun doesn’t stop there. The magazine release is highly textured and prominent enough to be easy for fingers to find without the eyes’ help.

In hand, the bore axis is as low as any I’ve handled. Even with the fattest grip panels installed, I could easily reach the trigger because of the deep set and sculpted shape of the top of the backstrap. It has a shallow finger groove, on both sides of the grip, just behind the trigger. Another ergo-friendly feature is the trigger guard, sculpted so the non-trigger fingers can be set as high as possible. It’s uncommon that I use the rail in a gun test, but the one on the SAR 9 came in handy for mounting a high-tech shot sensor.

We fired 200 rounds during this trial, using four brands of FMJ and one brand of  HP ammo. The gun wins on what I, as a defensive shooting practitioner, feel is the most important trait of all: reliability. The gun ate Aguila, Federal, Winchester, and both new and re-manufactured LAX brand FMJ.  It transitioned to L-Tech’s new HP load without a hiccup.

In an informal accuracy text, my expert shooter colleague fired one five-round group of Winchester, Federal, and Aguila 115 grain FMJ from seven yards from an unsupported standing position. Federal cut a good, centered four-shot hole. Our shooter called a flyer on the outlying round. Aguila formed a similarly tight group, but all shots trended left of center, we confirmed this difference in group placement on steel at up to 30 yards as well. Winchester’s group was respectable, but in a scattered, centered cluster. Of course, results like these can be unique to an individual gun.

The trigger is not terribly unlike that on a Smith & Wesson SD VE 9mm. The SAR probably has a bit less travel.  The wall is palpable, with a bit of creep between it and break. Trigger reset is average for this gun’s class, about the same distance as a Glock. Reset is clean, but somewhat subtle.

I paired the trigger test of the SAR 9 against my HK VP9, known for its quality trigger. In the test, I fired the SAR for accuracy on the very first shots ever fired from the gun. I also used a couple other review products, Competition Target Systems’ T-post mounted steel target, set 25 yards away, and a MantisX  shot sensor tracked accuracy which displayed the results my phone. As expected, I scored in the mid- and high-80s on a percentage scale with the SAR 9 at first, but in the 90s with the familiar VP9, used as a comparison gun. By the third five-round set, scores with the SAR 9 were neck-and-neck with the VP9, in the low to mid 90s, as I alternated between guns on each set. Long story short: this pistol fires as accurately as one that costs quite a bit more.

This gun ejects magazines with gusto—another trait preferred for a sport or defensive handgun. The mags are strikingly similar to the VP9’s, except the SAR 9’s have a better, easier-to-read pattern of numbered holes on the back. A couple times, I had to look at the shape of the floorplate to be sure I was retrieving a mag that matched the gun in hand.

The grip panels are another clear lesson learned from the VP9 design. The larger they are, the more the lower part of the palm is filled when firing. I was happy to be able to shoot the SAR 9 quite well, even with the large panels. However, the narrow trigger-to-web of hand distance might spell trouble to shooters with long fingers, who tend to put too much of the trigger digit inside the trigger guard. The tight, tight fit of this pistol in the hand is hard for this reviewer not to like—this gun’s recoil is easy to control.

At distance, firing on eight- and 10-inch CTS steel discs, the gun was consistent and rewarding to shoot. The creep I felt in the trigger during the accuracy drills disappeared from my awareness when shooting with other priorities, like rate of fire and distance, in mind.

As this pistol is so similar to others I shoot often, and because I personally don’t care for external safeties on modern pistols (a topic for a whole other article), I found myself using the SAR 9 and using muzzle and finger discipline as my safety devices. The thumb lever is well textured and will surely lend peace of mind to those who feel they need it. I found its operation to be distracting and a tad unwieldy. Hey UTAS, if you’re listening, an optional safety would’ve been a good idea. 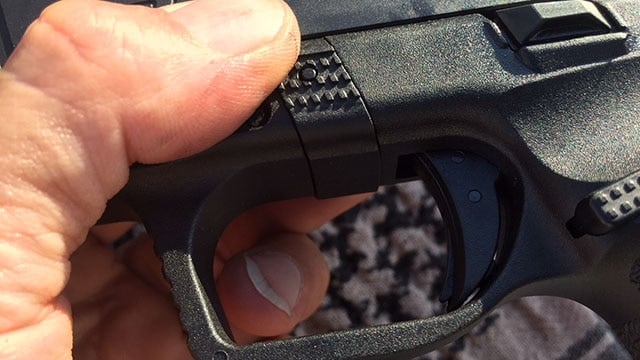 Take down and reassembly was quick and easy. (Photo: Eve Flanigan)

Without an owner’s manual on hand, disassembling the gun set off a wave of dread. It’s not taking them apart, it’s putting them back together! To my relief, successful take down and reassembly were quick and easy. The procedure is just like that on my Canik TP9 SA, which is to say it’s like a Glock, but the release switch on the SAR 9 is the most ergonomic of all. Clear the gun, rack the slide, press the trigger, and pull down with thumb and forefinger on the well-textured disassembly lever while pulling slightly back and then pushing forward on the slide. Presto.

The slide, barrel, recoil spring/guide rod, and frame are then available in easy-cleaning pieces. Putting it back together is straightforward, just put the slide assembly into the tracks of the frame.

There is a notable difference in the appearance of the steel on the polished feed ramp of the SAR 9 as compared to the VP9 and Canik. There are reddish and green discolorations and dark metal rather than mirror-like shine. This has no effect on performance that I can detect.

The SAR 9 is a very respectable choice in the striker-fired 9mm handgun class. It’s reliable and can move from range to home defense seamlessly. It was a joy to shoot, especially when I left the thumb safety off. Of course, this practice is done with the assumption users will follow safety rules and employ a sturdy holster. This would make a fine first handgun, or an upgrade from a less user-friendly model, for just about anyone. The fit is highly adjustable and the trigger is in reach of small hands.

As a defensive pistol, the stock sights are more than adequate. However, users may not be able to install aftermarket night sights as the sights appear to be Sarsılmaz/UTAS-produced. At $449 MSRP for the black and $499 for the stainless two-tone, the SAR 9 is more than fairly priced in view of competitors’ prices. No word yet on whether UTAS is working with holster producers. The Blackhawk Omnivore, with its secure retention and no-fuss draw, would be my choice for this pistol until a custom model is available.