Savage has produced a high-performance long range precision rifle in the Model 10 BA Stealth. The rifle is available in .308 and 6.5 Creedmoor. We tested the latter, and it exceeded most expectations. Here’s why–

The futuristic Model 10 is a long gun among long guns. It’s 45.25 inches with the adjustable stock at full extension.

The Model 10 is a long gun at 45.25 inches with the adjustable stock at full extension. (Photo: Eve Flanigan)

It’d be even heavier than its 9.2 pounds without a fluted barrel. The fully floating barrel is 24 inches with a 1-in-8 twist. The muzzle is threaded, and includes a textured screw-on cover. 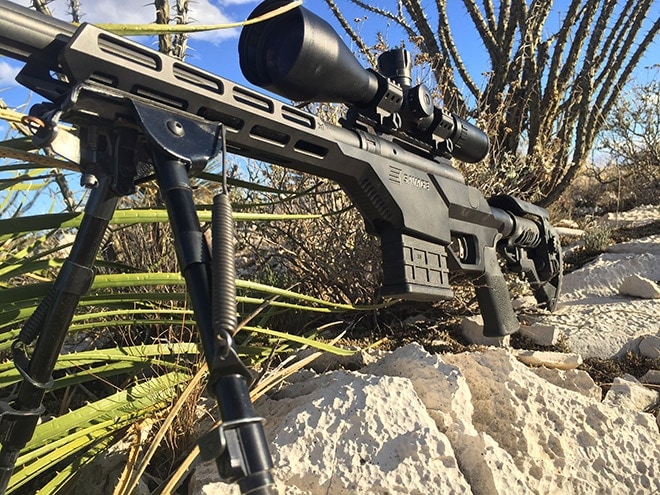 A minimalist, almost skeletonized, appearance is lent to this rifle by the accessory-friendly M-Lok forend. That look continues with the monolithic aluminum chassis, topped by an EGW Picatinny rail. A Fab Defense GLRShock six position buttstock, with an adjustable cheek rest, brings up the rear. The finish is blued all over.

Being purpose-built for long range use, there are no iron sights, front or back. One ten-round polymer magazine is included with purchase. 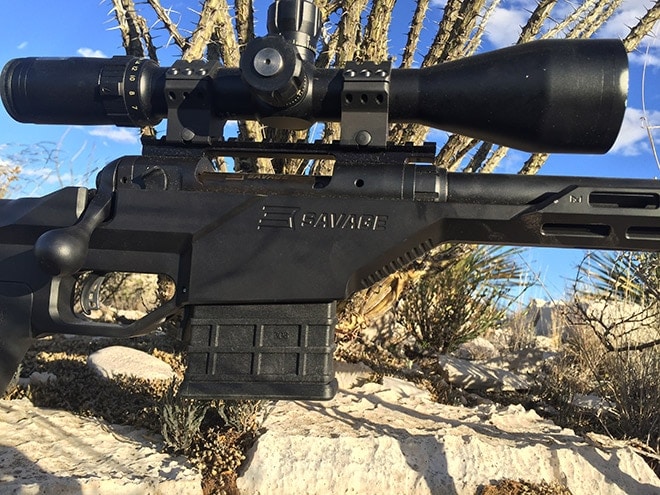 One 10-round magazine is included. Additional mags start at around $50. (Photo: Eve Flanigan)

The Stealth features Savage’s exclusive Acu-Trigger, which I became a fan of in the process of reviewing their Model 11 Scout. The trigger has the rifle’s only visible non-black component, the safety block. Surrounding the trigger is a wide polygonal trigger guard, which adds to the space-age look while providing substantial protection. 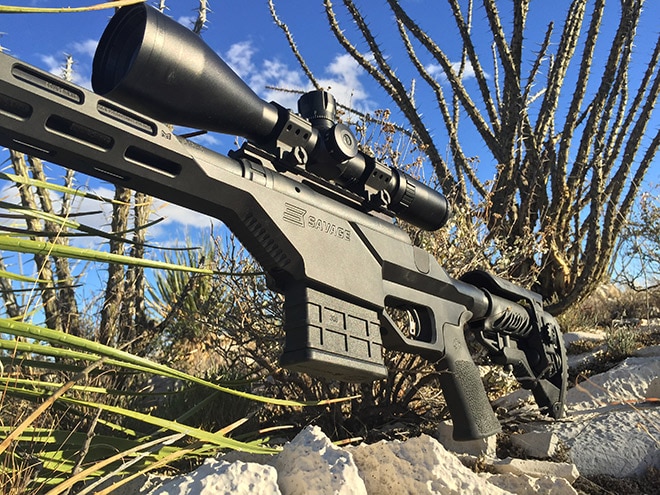 Bushnell loaned their excellent Elite Tactical 6-24x 50mm, first focal plane, milliradian adjustment riflescope for the test. It was mounted using Weaver’s high model tactical rings. This worked well for the most part. However when moving out to 900 yards plus, a 20 MOA base would have eliminated the need to perform mil holdovers because of the elevation turret topping out. 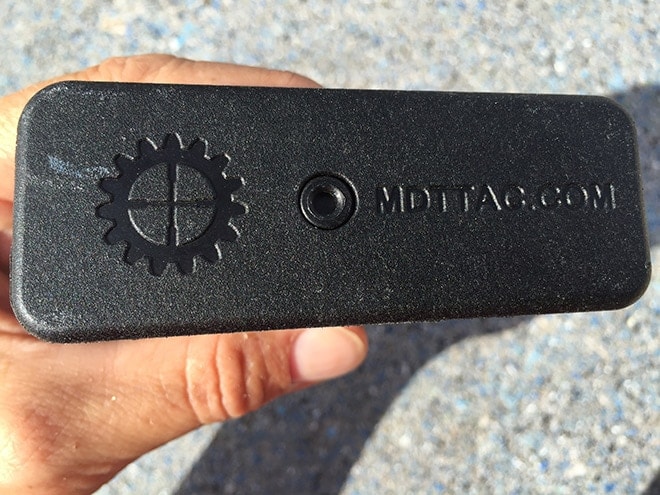 American Eagle’s newly released 140 grain open tip match load was initially used for testing. The magazine seats easily; loading and unloading were without issue. Unlike the magazine on my Savage Model 11 .308, this one never failed to feed correctly, regardless of the ammunition brand. The company stepped out of the box for the Model 10, using an MDT Tactical polymer magazine. In a conversation with Savage’s helpful representative, I learned that the company has struggled with magazine issues in recent years. On the BA 10 Stealth, they got it right. Good move, Savage Arms. 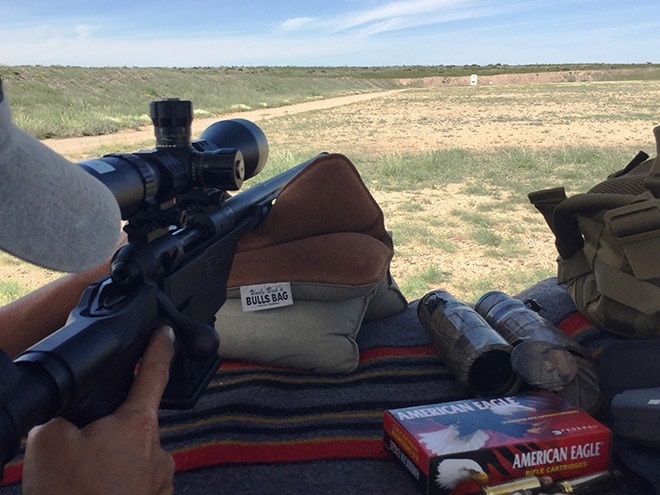 Zeroing was done on a 65-degree day in a 7 mph quartering wind. Firing was done from a supported bench rest position. The Stealth delivered an impressive sub-MOA group, with two of three rounds passing through the same hole.

The three-pound, one-stage trigger is crisp. After the AccuTrigger device is disengaged, there is no travel. It’s as good or better as any high-end match trigger I’ve used. Savage’s AccuTrigger is adjustable, but for purposes of long-range practice and hunting, I see no need to change it. 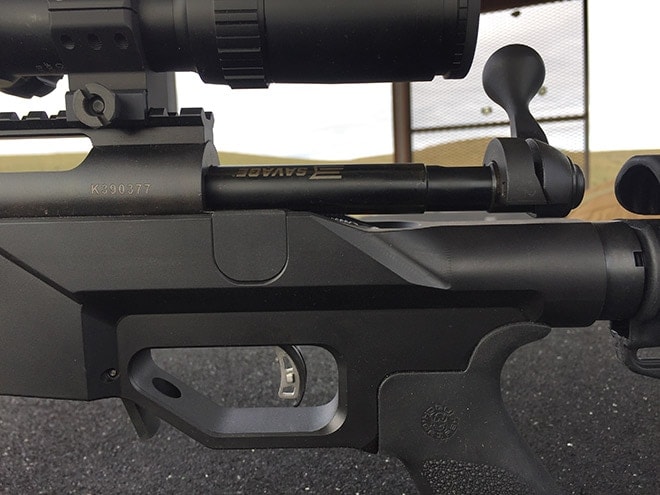 The bolt runs smoothly. Fans of oversize bolt handles might want to attach an upgrade here, though we found the bolt handle perfectly manageable. Savage’s three-position safety, centered behind the bolt and ambi-friendly, is standard.

Life got busy, and we found ourselves doing only brief confirmations of holdovers at 500 and 700 yards before facing the Stealth with longer-distance targets. This proved to be immaterial as it burned through those distances with easy accuracy. 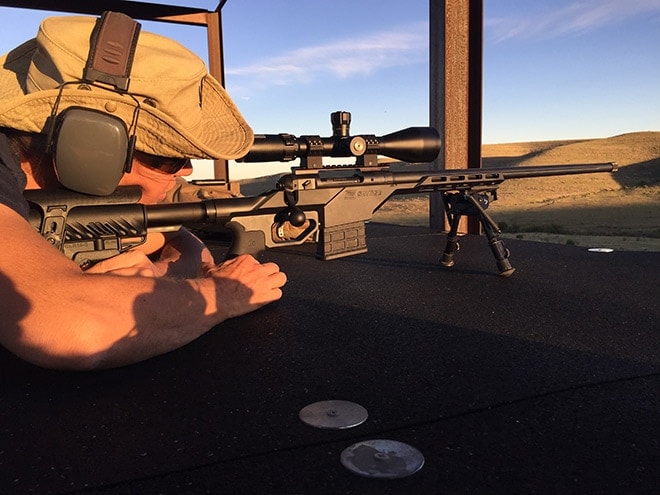 Stretching out to 900 and then 1,000 yards, and in 10-13 mph crosswinds, we expected to spend some time experimenting in order to land rounds on target. It took only two rounds per distance to hit the target. The combination of this wind-resistant load and the precision engineering of the BA Stealth led to a jaw-dropping experience in less than ideal conditions. The 12-inch steel plate at 1,000 yards has an effective target area of an eight-inch diamond. With holdovers and a slight wind correction established, wind made little difference as we were repeatedly treated to the ringing of steel. 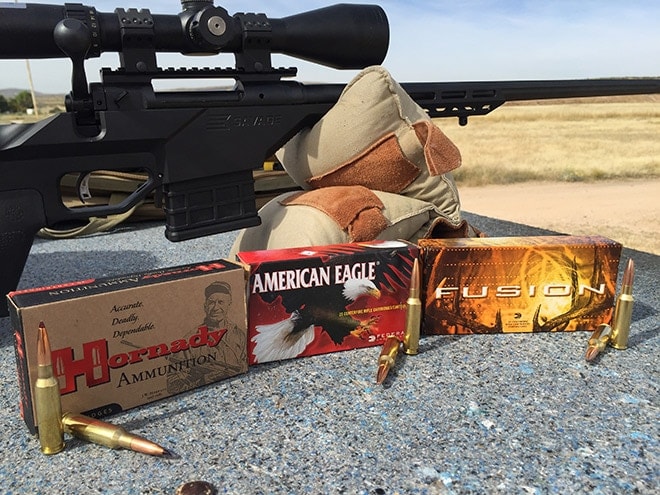 Ammo comparisons and move from range to field 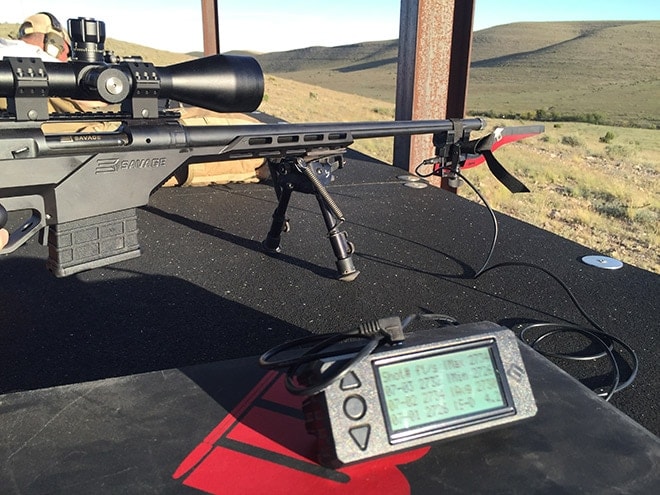 We were mightily impressed with the performance of American Eagle’s 140 grain OTM load used for zeroing. It’s advertised as having a muzzle velocity of 2,700 fps, but that consistently showed up faster—an average of 2,724—on the chronograph. We attribute this to the longer barrel.

The best three-shot group attained with American Eagle was 5/8 of an inch at 100 yards. It’s a great performer, but the occasional quirky but minor flyer, within 1 MOA, made us wonder if another load might perform better.

Two more were put to the test.  Hornady’s 140 grain ELD Match load proved the most accurate with this particular rifle, standing out with a half-inch, three-shot group. It has a factory muzzle velocity rating of 2,710 fps, however we only had access to a chronograph for the American Eagle test.

Federal Ammunition provided samples of its newly released Fusion soft point boat tail 140 grain load, specialized for hunting and penetration with a 2,750 fps muzzle velocity rating. It rang in with a 7/8 inch group which is a success in most anyone’s book. 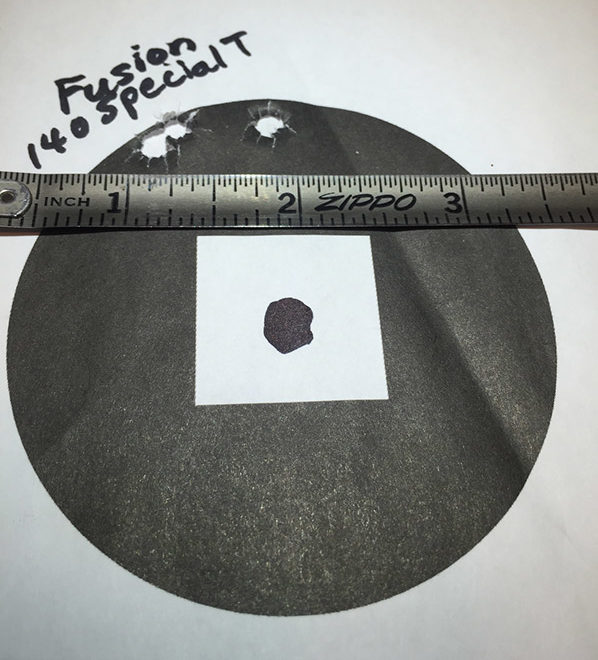 A long-range test on a blustery, cold day, using the Federal Fusion load, was a bit frustrating. We struggled to make consistent hits at 750 yards, when a few weeks earlier, 1,000 yard hits were easy. Certainly, wind made a difference. However, there may have been another factor at play. Upon arrival home at the end of the second test, we discovered the sling attachment on the forend had loosened on its own. The bipod had been attached to it. The resultant instability, though minimal, may have affected accuracy. Just like scope mounts, sling attachments should be regularly examined for tightness! 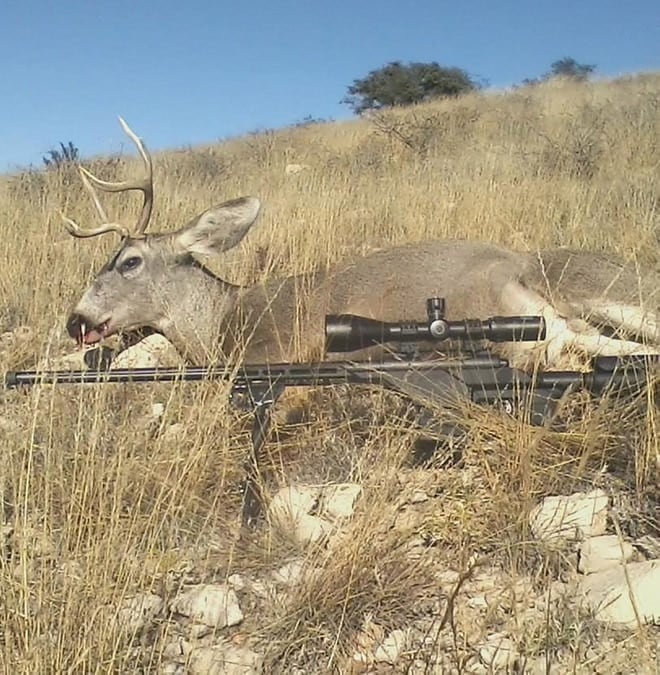 Mule deer and the Savage used to take it. (Photo: Eve Flanigan)

The Fusion load was taken on a mule deer hunt as the finale of our test. After an hour-long stalk, a mature buck was taken at 327 yards, with elevation adjusted for 300 yards based on Hornady’s online ballistic app. The Stealth was positioned with the aid of a Harris bipod, as it had been for our long-range testing. A single shot penetrated exactly as aimed, penetrating both lungs and a scapula and before making a clean exit on the other side.

This caliber is certainly best suited for larger game, with the lack of expansion here being quite telling. However, a quick, humane kill was still the result.

Overall, we are pleased and impressed with the high-grade performance of this reasonably priced rifle. Here are a few considerations for folks thinking about purchasing one: 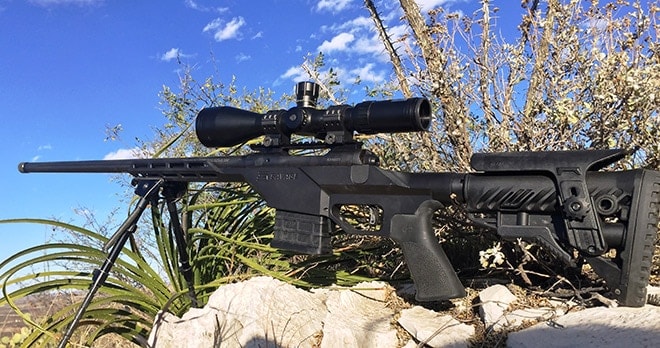 Of potential concern is the long term durability of the lightweight, all-polymer mag. Although Savage rifles, in my estimation, represent an outstanding return on performance for the investment, their magazines are pricey and can be scarce. Replacement mags for the 10 BA Stealth are hard to find as of this writing. When in stock, expect to pay upwards of $50 for spares. 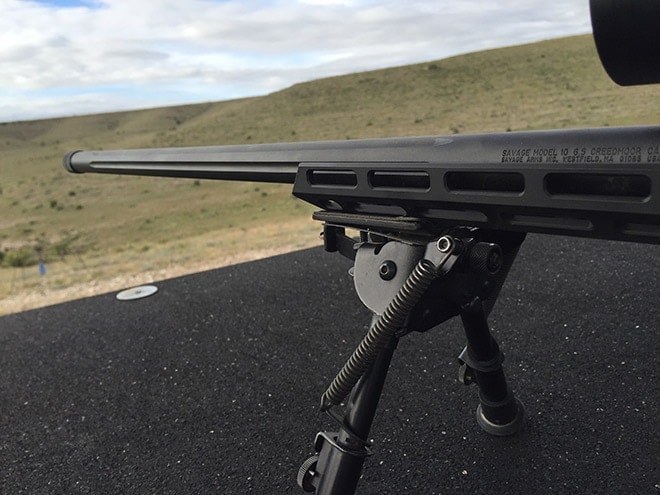 The addition of the bipod with long range testing.(Photo: Eve Flanigan)

A precision rifle cannot deliver satisfying performance without a high-performance optic. Like the 10 BA Stealth, the Bushnell Elite Tactical scope more than filled the bill to get the best out of the rifle. A crystal-clear view, dependable zero, and a gloriously wide range of magnification helped to make this test a success. Retailing for a little less than $900, this scope delivers modern features and excellent performance for less than half the price of some competitors’ scopes. 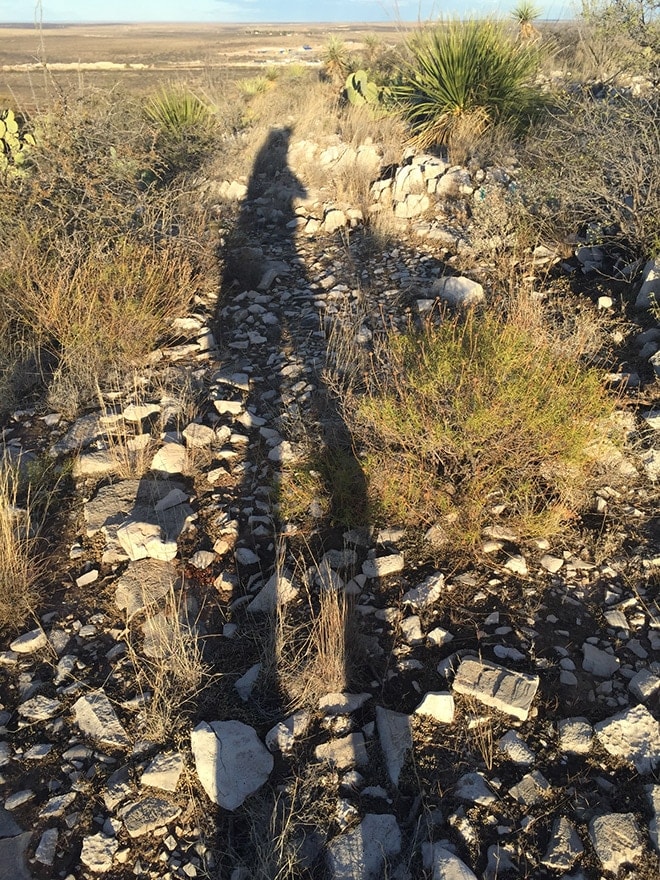 As previously mentioned, a 20 MOA scope mount for this particular scope would make firing at distances of 900 yards and greater a bit easier. With the scope mounted as we have it, when elevation adjustments exceed 6.4 MRAD it’s necessary to use the elevation increments on the reticle–which works, but can slow down the process in a critical moment.

This is not a compact or lightweight rifle. When I, an average-size female, carry it on my back in a case, it extends from my knees to several inches above my head. With the scope, it weighs more than 10 pounds. For hunts that involve a lot of hiking, this is a factor worth considering. On the other hand, recoil is manageable and, with a good shoulder mount, follow-up shots aren’t hard to execute even with high magnification. 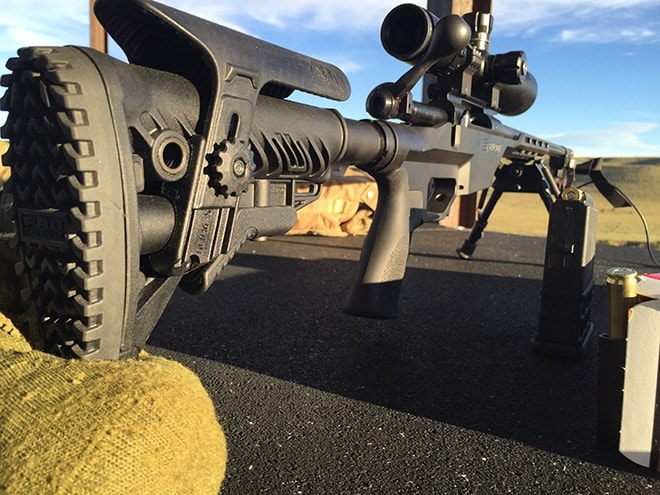 The 10 BA Stealth makes a great choice for anyone wanting to embark on or improve their high performance, long-range shooting without breaking the bank. The 6.5 Creedmoor caliber is quickly carving a permanent niche for itself as a more wind-resistant, and slightly longer-range performer than .308. Ammo is more affordable than other popular long-range cartridges, i.e. 300 Winchester magnum and 338 Lapua. This rifle is a superb choice for the big game hunter for whom packing around a large and heavy gun isn’t a problem. Wind-bucking 6.5 Creedmoor is a real advantage in typical conditions where larger game animals are found. 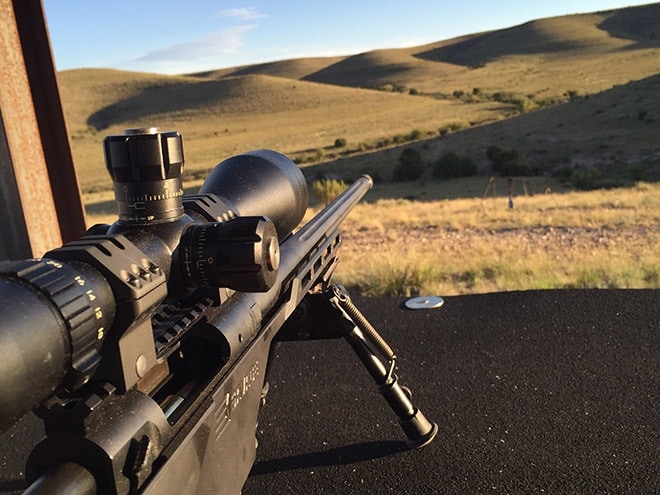 A former Marine scout sniper once advised me that aspiring long range shooters should start out with the .308 caliber in order to develop an understanding of ballistics. The 6.5 Creedmoor’s performance is the equivalent of having the cheat sheet to a final exam on long-range shooting. If time is of the essence, why not just leapfrog into this caliber and this rifle?

The loose sling/bipod attachment, a temporary disappointment, is an example of where small corners may have been cut in order to make this precision rifle more affordable to the average shooter. With attention to maintenance, this is a non-issue. 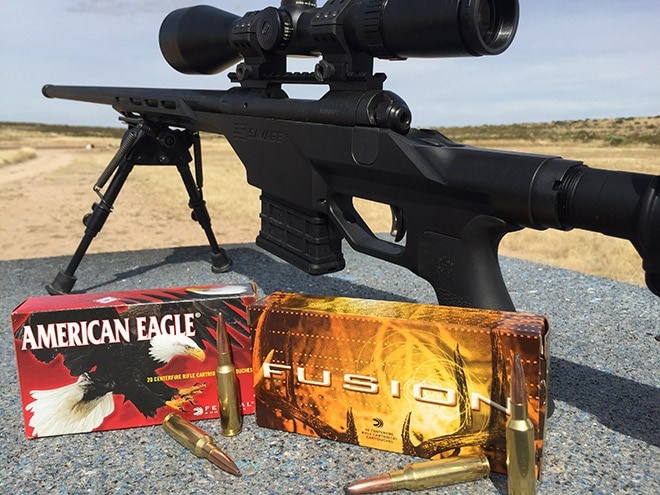 MSRP is $1,207. Current real prices are in the $950 ballpark. For a long-range precision rifle, the 10 BA Stealth, in combination with the Bushnell Tactical Elite LRS 6-24x 50mm scope, is a setup that performs as well or better than packages costing more than double.

Special thanks to Federal Premium Ammunition and Lucky Gunner for supplying test ammunition—we used quite a lot!