How much gun do you need?  This isn’t an easy question to answer.  But if you’re going to err on the side of caution, I might suggest you check out the Savage Model 111 chambered in .338 Lapua Magnum.  This is a long range, highly functional, tactically inspired hunting rifle that is more than enough gun for anything on this continent.

The .338 Lapua Magnum was designed to fill a combat role that required more than the typical .308, but less than the .50 BMG.  The heavier bullet was required to punch through five layers of standard body armor and still make a kill (and that was at 1,000 yards).  It is the round used in the longest confirmed sniper kill, which was made by British sniper Cpl. Craig Harrison at 2,707 yards. 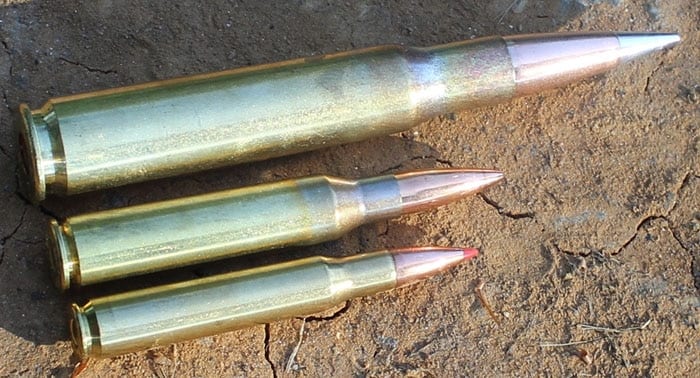 While the round has only been in service for 20 years or so, it has proven itself on some stretched out battlefields.  It is ideal for the open ranges of the middle east, where troops may not be able to carry the weight of a .50 BMG.

What would you hunt with a .338?  Moose, maybe. Elk.  Kodiak.  It would be hell on whitetail.  I bet there are some ranchers out west that are using the rifle on coyote.  If I could choose an application for the rifle, I’d use it to hunt swine in Texas.  The penetrating capabilities of the round would be perfect for fat-assed feral hogs.

But the round is growing in popularity with those hunting really big game, too.  The .338 is a bit small for hunting elephants, or cap buffalo, but it will work.  Accuracy is everything.

The rifle itself is an oddity.  It is very utilitarian in design.  The 26-inch barrel is finished in a heavily textured black oxide.  The slotted muzzle break helps to hold the barrel down and adds to the gun’s overall length, which comes in at 50 inches.  The stock is a satin nylon and comes with an adjustable cheek rest. 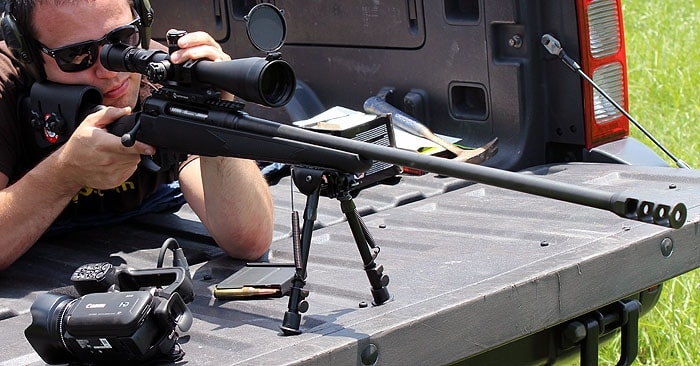 The trigger on the rifle is a Savage AccuTrigger.  It has a safety built in, and breaks clean and crisp.  The bolt is oddly slick for a rifle that has to eat up intense recoil energy.  And the only distinct ornamentation on the rifle is the jeweling on the bolt.  It is an accent, and a nice one, that really dresses up the flat black of the 111. 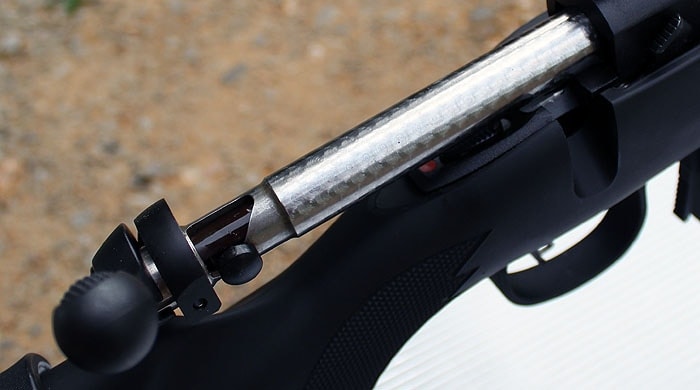 The bolt is jeweled, meaning it’s lightly touched with a bit. The pattern holds more lubrication than a flat surface.

The box magazine holds five rounds.  It is a simple single stack steel design, but functional and dependable.  In all of our testing we never had any issues with the Accuracy International magazine that comes with the rifle.  But even without a full load of .338, the gun feels like a handful. Otherwise, it weighs in a 9 pounds when empty.

The stock itself is reinforced with aluminum rails inside.  The barrel is floated for its entire length, which helps to improve accuracy.  And the barrel is decently stout.  It is not a bull barrel, nor is it as thin as it could be.  This mid-weight taper is a solid indication of the build of this gun.  It’s a compromise.  Less weight may mean a slightly less accurate gun.  The thin barrel will heat up faster.  But it costs less to make, and is more easily carried. 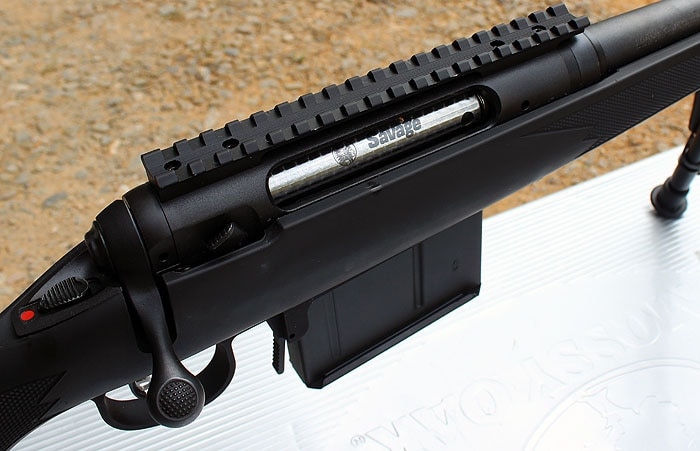 Savage has provided an ample rail section on top of the receiver.  There’s almost enough rail (with a forward slanted mount) for a scout scope, which would be a bit ridiculous (and a lot of fun).  We mounted the Leupold Mark 4 on this one.  The Mark 4 is designed for shooting at incredibly long ranges, so it seemed like a perfect match for the Savage.

Though the .338 is growing in popularity with hunters and target shooters, Savage pays homage to the rounds martial roots with the flat black and tactically inspired accoutrements.  While the stock and the bolt are a nod to traditional hunting guns, the cheek rest and muzzle-break give the rifle a certain flair that will be attractive to shooters who want to keep their polymer and steel color coordinated in a fashionable black.

I feel compelled to mention that you may have trouble finding somewhere to shoot the .338.  Yes, some of you might say Montana.  And that’s an ideal choice.  This is a round that can be accurately shot to at least 2,707 — that’s a mile and a half!  And when it gets there, it still has that deadly combination of mass and velocity. 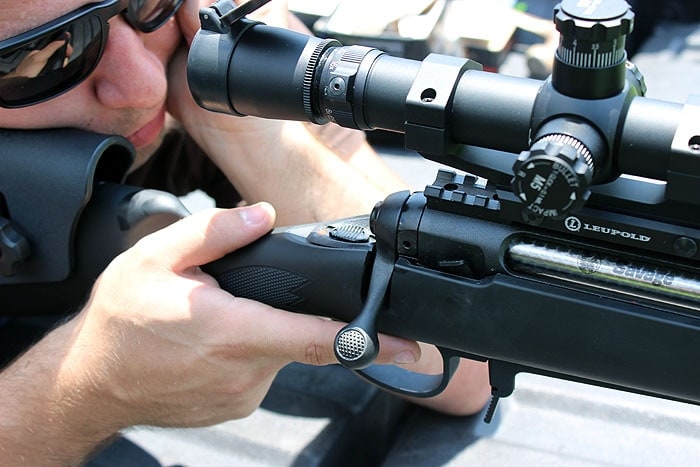 When we got the rifle in, I started calling around and asking where I might shoot it.  I was surprised at how many of the really long ranges simply declined.  In my Virginia-area, most of the long ranges use steel as a shot indicator.  A good steel target will take a .30-06 from 1,500 yards.  But it may not brush off a .338.

You can, of course, shoot at closer distances, but know what is down range — way, way down range.  If you were to have an accidental discharge with the Savage pointed up a bit, that chunk of lead would just keep on going.

Savage’s gun is ideal for hogs.  But we don’t have the hog problem that’s plaguing most of the south.  We also don’t have too many wide open distances.  The most we could manage with the Savage 111 was 600 yards.  That is more than enough to test our long range abilities. 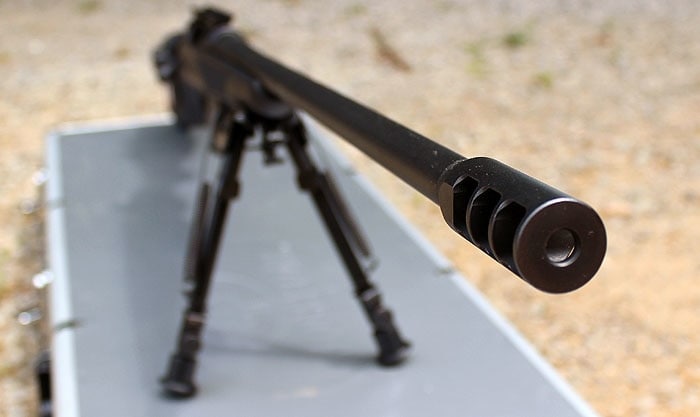 Up close, the Savage feels like overkill.  It is a hard hitting rifle. The recoil is like a solid punch in the shoulder.  It is enough to snap you back a bit.  If you look at the video above, you can see Jacob’s head snap away from the scope.  He’s usually capable of shooting and watching for impact through the scope.  But not with this type of recoil.

Though the rifle is heavy, there’s really nothing to absorb the recoil.  The pad at the end of the stock must help some, but it is minimal.  So look for a scope with generous eye relief.  The muzzle-break does a great job of keeping the gun level.  The gas is split out to the sides nicely.  The rifles bucks back, but doesn’t rise too far.

That allows for rapid follow up shots, should they be necessary.  Here I go again with my hog hunting fantasies.  I’m imagining a scenario that would warrant opening up on five or six confused porcine targets.  Under such circumstances, the Savage 111 could be worked from the shoulder, and it the flat recoil would allow for reasonably quick turn around times between shots.  And the long range accuracy would allow you to hang back from the herd.  The first hog would fall before the rest heard the shot.

Still, it isn’t a speed demon.  And it isn’t as capable as some of the rifles that cost three times as much.  We were shooting Hornady 285 grain BTHPs.  We sighted the rifle in at 100 yards.  Three-round groups consistently came in at one MOA. That’s not match winning accuracy, but it is more than sufficient for hunting.  At longer ranges, the groups spread out consistently.  I have no doubt that, in capable hands, this gun could shoot accurately to 1,500 yards or more. 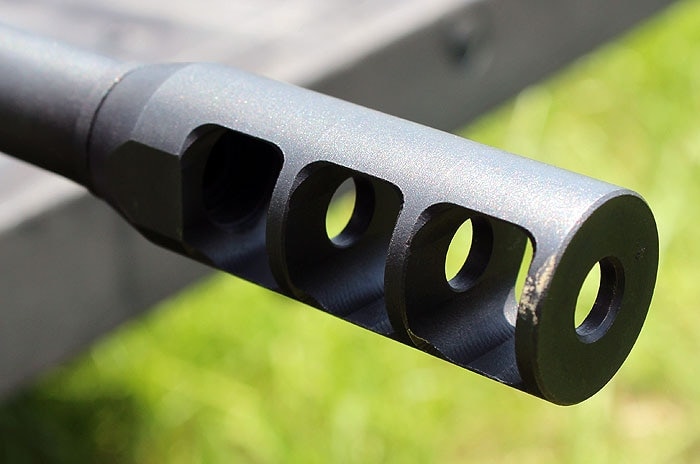 But I’m not that good.  We were shooting over varied terrain, in very hot temperatures (nearing the century mark), with varying wind conditions.  Thanks to the stunning abilities of the Leupold Mark 4, it is easy to imagine the potential of this gun.  But we had to settle for solid hits at the 600 yard mark, as everything beyond that was old growth forest.

The price tag on the Savage 111 varies, but you can find them for right around $1,100.  And that’s what it comes down to.  This is a rifle that is capable out of the box.  The stock is solid.  The trigger is adjustable.  The 1 in 9-inch twist rate of the barrel stabilizes the longer match bullets nicely.  The Savage 111 allows shooters on a more modest budget to work with one of the more expensive platforms.

And I’ll close with this: shooting the 111 is expensive.  The rifle may not break the bank, but practice will.  The .338 is pricey.  The Hornady we were working with came in at close to $5 a round.  American Eagle and PMC make less expensive rounds, but they’re still going to hit your wallet almost as hard as they’ll hit your target.