The Savage Model 42 has a deep history.  One of the most prized Savages in many shooters’ collections is a Model 24.  These came in a variety of configurations, but the most utilitarian was the .22LR/.410 shotshell combo introduced back in 1939. 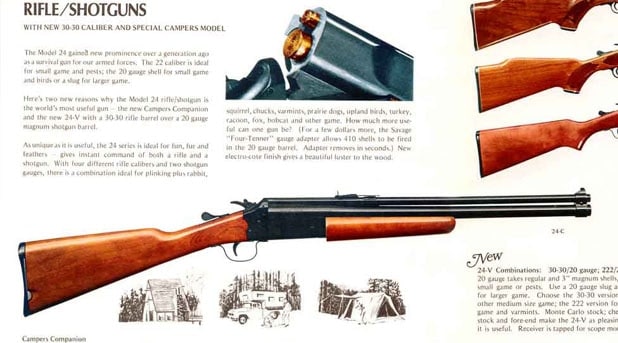 The new Model 42 shares this configuration. The feel, though, could not be much different.  The new Model 42 has left behind the traditional wood and steel feel of the old Model 24.  And that, I think, is why its number has been flipped around.

The hammer has what amounts to a selector switch which allows the shooter to choose which pin the hammer will hit.  While this can provide a bit of confusion at first, the hammer is intuitive enough.  I find I can cock the hammer and change the pin selector in one fluid motion.

The safety, which must be engaged from the left side of the gun and disengaged from the right, blocks the hammer’s path to the pin. But the hammer will still drop, and it can scare you good if you’re not expecting it to fall. 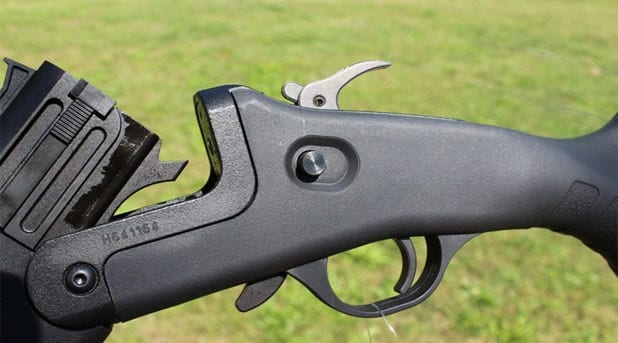 The stock is polymer. This allows the whole package to weigh in below the old school Model 24s.  The texture of the stock’s grip is reasonable.  The forend, also polymer, is equally nice.  No complaints there.  The trigger and trigger guard are also polymer.

The extractor is a simple slide that lifts the spent brass free of the chamber.  It works reliably well.  And the simple steel blades that catch the rim of the brass can be easily adjusted if it isn’t pulling as well as you’d like. 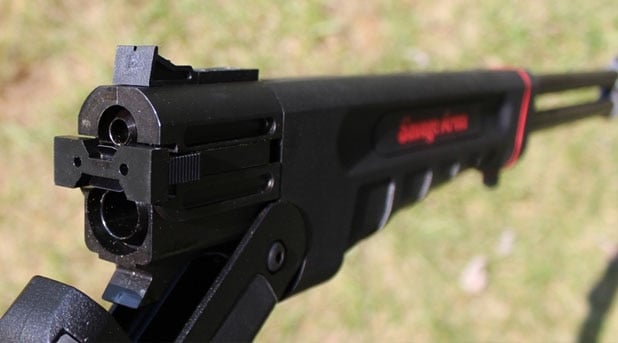 But the Model 42 does have one defining issue.  The sights are polymer.  The rear sight is very plain. It is a flat black sight with decent cut out.  But the front sight leaves a lot to be desired, at least for the .22LR.  It is conical, and surprisingly wide.  I also find it very difficult to pick up against the back sight.  In this era of fiber optics, I don’t understand why the sights on the Model 42 aren’t any better.

While I’m on my soap-box, I’ll go ahead and admit that I can’t hit much with the .22LR barrel.  I can tag a tin can, but that’s about the limit.  I had a Browning Buckmark Camper with me the day I was shooting the Model 42.  With the Buckmark, I could put rounds into a one inch bulls-eye.

I’m not sure if I can blame the Model 42, or if it is just this Model 42.  I’ve read other reviews.  One reports shooting groups right at an inch with the .22LR barrel from 25 yards.  I don’t think this is with the gun locked up in any kind of brace.  If I am to believe what I’m told, these results come from shooting standing. 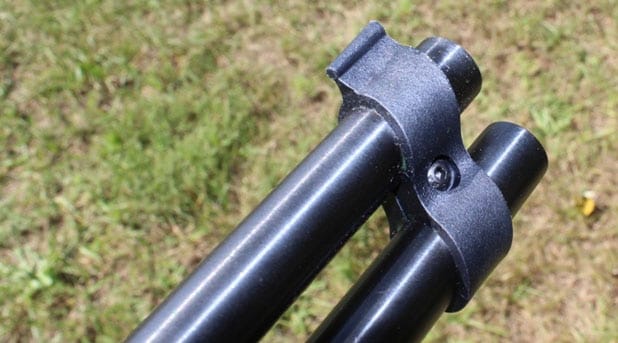 I have no doubt that the Model 42 would shoot an inch at 25 yards if the rifle were in a vice, but I still don’t know how well it would shoot to point of aim.  Or how you’d tell.  The back end of the front sight is so wide that it covers up a good bit of the target.

But now I’m going to contradict myself.  The .410 barrel, even with these sights, is amazing.  I was plinking with the gun in the field out behind my house and I’d set a tin can on a fence post.  I was shooting OOO buckshot, and had no problem hitting the can from 25 yards.  I took ten successive shots and never missed.  Each shot drove the can farther into the field.  In the end, I was hitting it from 40 yards, though it had stopped scooting across the grass by then.

Savage isn’t the only company who thinks this is (or was?) a good idea.  This article looks at five different combo guns.  But the Model 42 is taking durability to the next level.

A straight shooting Model 42 will appeal to several different camps of shooters.  It is a great camping gun.  The rugged design and basic set-up on the gun makes it both useful and fun.

It would be a solid gun for a young shooter who needs the restrictions of a single shot weapon for learning purposes.  This gun is nearly indestructible.  And if anything were to go wrong, the gun would be easy to fix – even in the field.  This makes the Model 42 an ideal teaching tool for shooting, and for basic function issues.

I think it would be an ideal choice for emergency preparedness.  This is one of the best configurations for realistic survival considerations, and it keeps you from carrying two guns.  I’m not talking about zombies, or those imagined scenarios that have you fighting your way out of urban anarchy.

Despite my disappointment with the .22LR accuracy (and I tried the gun with every brand of .22LR I could put my hands on), I still really like this gun.  It is a great idea.  I like how Savage has taken a classic concept and reworked it. 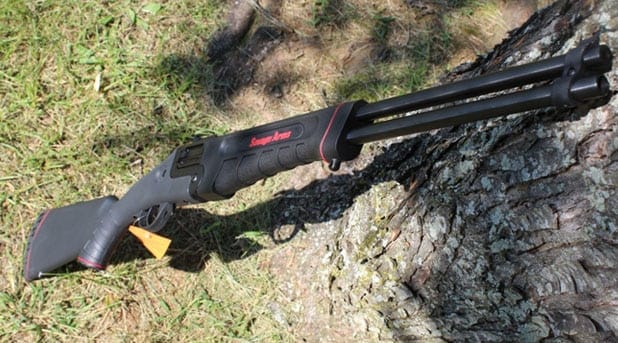 When Savage announced that they’d be releasing the Model 42, I couldn’t wait.  I put my name on a waiting list way before they were in production.  Now that it’s here, I’m wondering about how easy it would be to put a serious sight on the thing.  I don’t think that I’d ever put an optic on the Model 42, though that might clear up all of the issues with the .22 barrel.  But that seems like overkill.  This is a knock around gun.

And there will be after-market options soon enough.  I want a better front sight.  I’d also like to see a stock that will hold a healthy supply of ammunition.  Those two small additions would move the Model 42 to the top of my bug-out gun list, for sure.