One of the biggest splashes of the year belongs to Savage, as they debuted not one, not two, but a full line of direct-impingement AR-style rifles for 2017.  With the tagline “Better Comes Standard” their MSR rifles are touted as superior production guns.  Guns.com goes to the heart of the matter with the MSR-10 Hunter to find out whether Savage is indeed setting a new standard or just another black gun on an already loaded market. 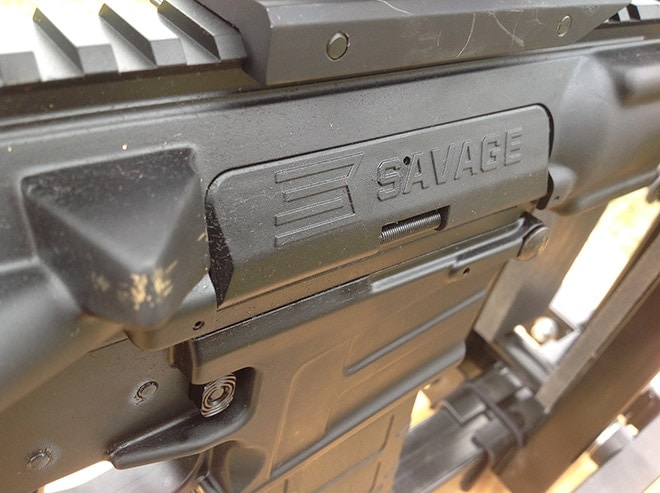 While a name like MSR would seemingly stand for “modern sporting rifle,” Savage insists that’s not the case; rather, their MSR moniker means Modern Savage Rifle.

Our test MSR-10 Hunter is geared, obviously, toward hunters but also doubles as a capable target rifle.  At the top of the heap is the MSR-10 Long Range, the sole side-charging model built for distance shooting with a two-stage trigger, long barrel, and Magpul PRS target buttstock in either .308 or 6.5 Creedmoor with an MSRP of $2284. 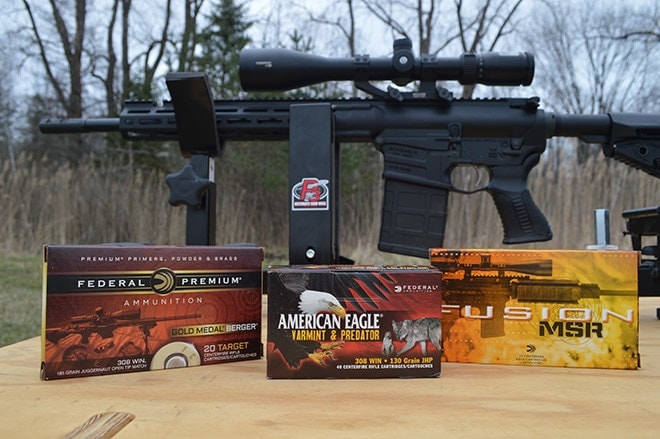 After chatting with Savage reps and handling the weapons, it’s clear the company’s intent was not to pile another AR platform on an already crowded market.  Whether it’s the basic Recon or the high-end Long Range, these rifles have upgraded triggers, gas systems, 5R rifling, and heavy-duty finishes. Shooters get an American build with well-proven Savage quality and customer service. 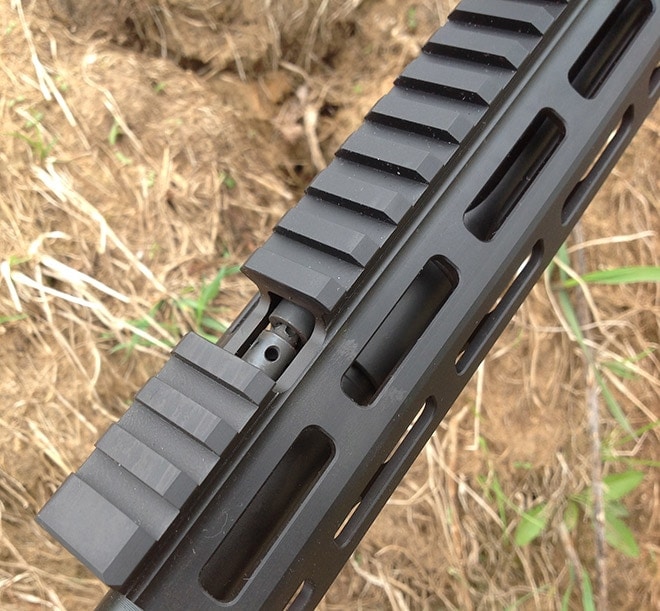 The Hunter is a direct impingement semi-automatic compact AR-10 sporting platform available in both .308 Win and 6.5 Creedmoor chamberings.  The Savage-brand barrel is button rifled with 5R rifling and a Melonite QPQ coated barrel.  There’s a free-float M-LOK handguard and custom forged lower, and hardcoat anodized receiver. 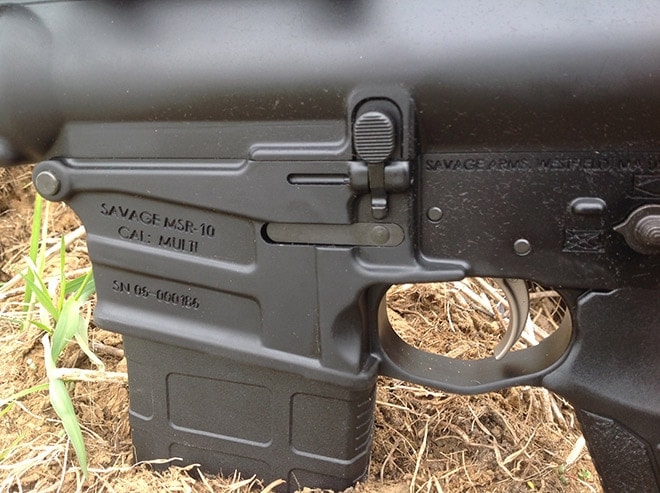 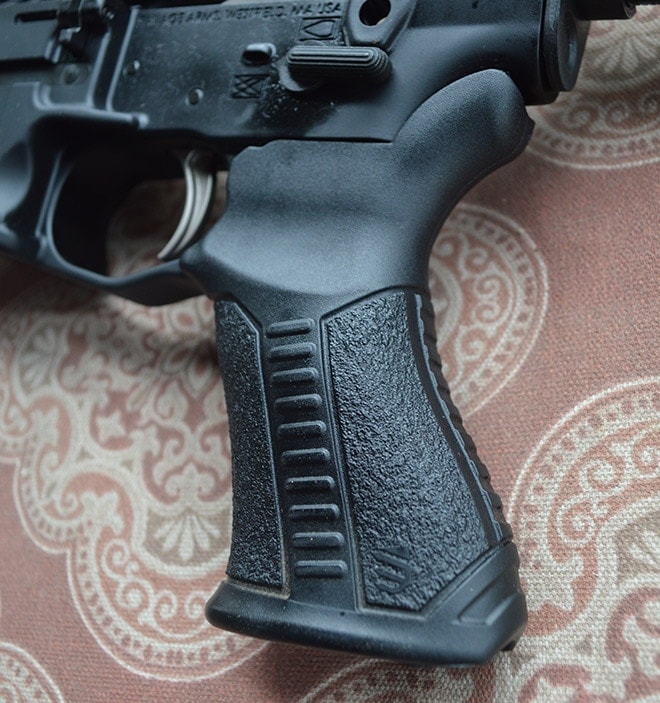 Given Savage’s place in the Vista Outdoor brand family, all MSR rifles have a stable of suitable ammo, optics, and accessories.  The company recommends matched ammo with Federal Premium Gold Medal, Federal Power Shok Copper, Federal Fusion MSR, and American Eagle Varmint & Predator.  Optics geared toward the MSR include Bushnell’s AR-scopes and our test Trophy Xtreme optic.  One-piece SPR mounts from Weaver round out the system, whether using one inch or 30mm scopes.

If that’s not enough, there’s plenty of gear, cleaners, and targets from Champion, Hoppe’s, Blackhawk! and Butler Creek, all of which are highlighted in a pamphlet shipped with the rifles. 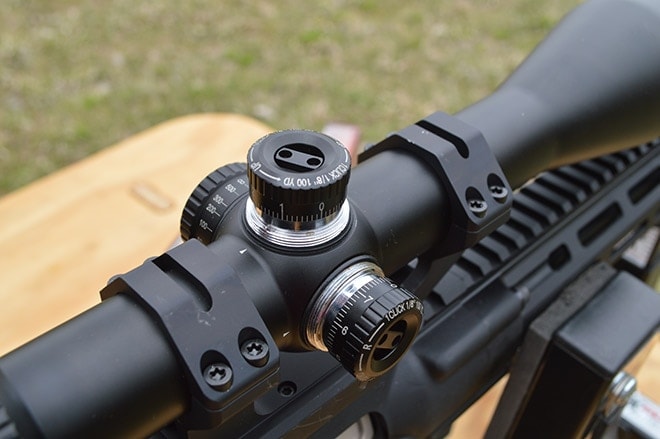 We headed out to the range with our Hunter and the Bushnell Trophy Xtreme 6-24×50 scope mounted in Weaver’s one-piece SPR 30mm mount.  The rifle is well balanced, and feels lighter than many AR-10 platforms; in fact, it feels much more like an AR-15 in the hand.

The extended full-length rail leaves ample space for both long-tube optics, backup irons, and other accessories.  One of our favorite features is the Blackhawk! trigger which breaks quite crisp at just a hair over six pounds on our Lyman gauge.  Where most AR’s require an upgraded trigger, this one truly is much better than average out of the box, though if this were a true target gun, I’d opt for the two-stage puller offered on the MSR Long Range.  Packaging for the Hunter is a simple, albeit somewhat flimsy, brown cardboard box — a little out of character for a classier gun.

The DOA Christmas tree-style reticle of the Trophy Xtreme optic gave us plenty of windage and elevation aiming points, as well as over 50 inches of turret adjustments  The 6.5 Creedmoor may be the hot commodity right now, but it’s really difficult to beat the range of bullet weights and types in .308, including subsonic hunting ammo.  Through over 340 rounds, we had 100% feed-fire-eject-feed success even with seven different brands of ammo. 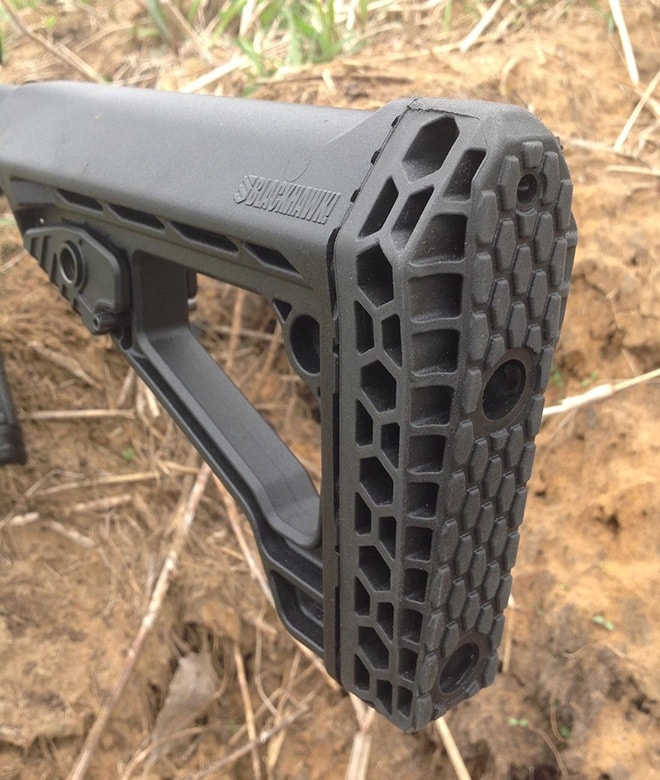 Finally, we get to the heart of the matter.  All the features and fluff don’t mean much if the rifle doesn’t shoot, so we set up targets at 100, 200, 300, and 500 yards. While the rifle excelled at 100-200 yards, it really dug in at the longer ranges as well.  Shooting conditions on our late spring range day saw 48 degrees and quartering winds of 8-10mph.  All shooting was done from a solid rest on the bench.   While the rifle easily doubles as a target gun, hardcore long range shooters would likely prefer the fully adjustable buttstock and two-stage trigger of the MSR Long Range, though I have little doubt our MSR Hunter will outshoot most trigger pullers at extended ranges.

At 100 yards, the rifle easily cut hole on hole, with repeatable groups right around 0.5 inches.  At 200 yards, average three shot groups came in at 0.73 inches.  Though Savage is not advertising any accuracy guarantees for the rifle, we were pleasantly surprised to find the rifle still well capable of MOA groups at 300 yards, and the 6-24×50 Bushnell optic didn’t hurt either. 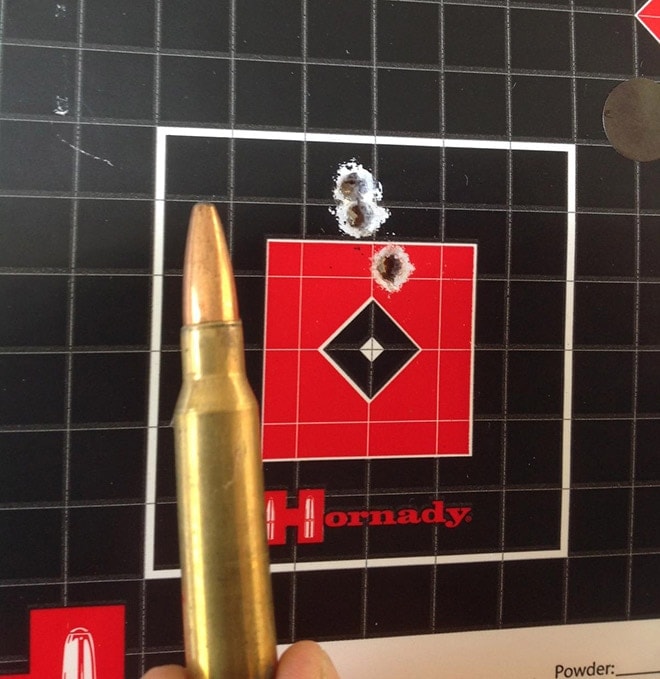 Though we didn’t punch paper at 500, all shooters were able to pound a six inch gong with regularity.  At that distance, even with the second focal plane optic dialed up to 24X, the thickness of the reticle obscured some of the target and would have made super-accurate paper punching more difficult.

There was really no ammunition that the rifle didn’t like, and though of course different bullet weights and types shot to varying points of impact, the groups remained tight.  The only thing that slowed us down on the range was periodic cooling time for the MSR Hunter, since it was easy to punch out bullseyes one after the other with the 20-round mag.

Bolt after one day of firing. (Photo: Kristin Alberts)

Though I’ve never been a big proponent of big game hunting with semi-autos, much less AR platforms, the Savage Hunter goes a long way towards changing my mind.  The combination of accuracy, weight, customizability, and durability make the MSR Hunter a solid hunting companion.  In fact, the 16 inch barrel is an ideal compromise for hunters between portability, accuracy, and performance.  There’s no substitute for making the first shot count, no matter what.  But if you like a ready follow-up, the Hunter is ready with calibers capable of knocking down game from antelope to deer, or even greater with the correct ammunition and shot placement. 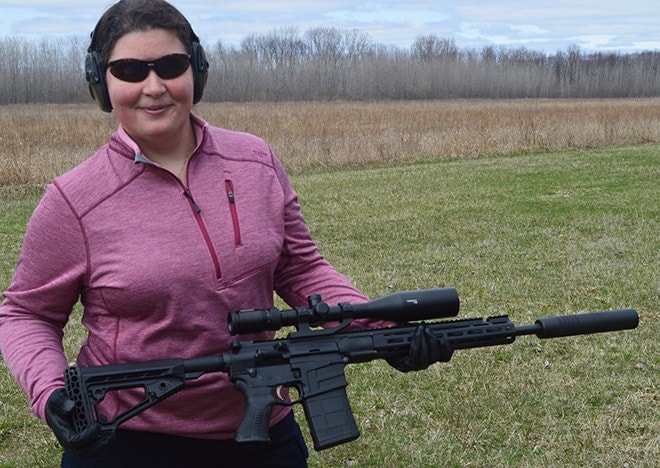 While the gun may feel lightweight, the well padded Axiom buttstock absorbs recoil well, even with stout hunting rounds.  The muzzle brake’s solid-bottom design forces gases upward, ultimately minimizing muzzle rise for faster repeat shots.  Though we enjoyed shooting the rifle right out of the box, one of the greatest joys of the test was screwing a suppressor on the 5/8-24 barrel threads.  Our Yankee Hill Machine Phantom 308 made a ready companion, though Blackhawk! now has their own line of suppressors, which would partner very well with the rifle.

And last, but definitely not least, one of our favorite and under-marketed features: the Hunter is equipped with an adjustable gas block for fine-turning when shooting suppressed, especially when using subsonic rounds.  With likely changes to suppressor regulations with the Hearing Protection Act, rifles like the MSR-10 Hunter could soon be a hot commodity. 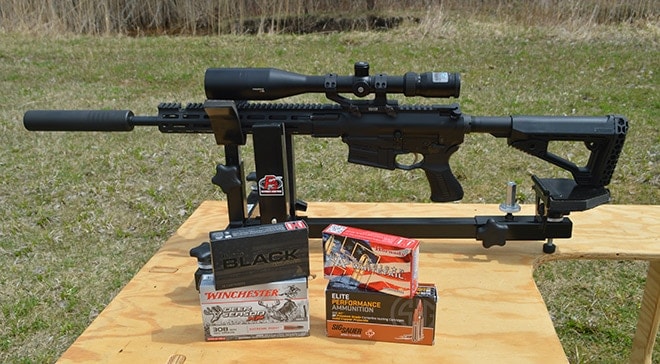 The suppressed gun and ammo from outside the Vista family. (Photo: Kristin Alberts)

The answer to our burning question of Savage setting the standard or simply flooding the market was quickly answered on the range.  Prices may be slightly higher out of the gate, but with real world prices lower than retail partnered with the fact that rifles like the Hunter will require little to no upgrading gives these guns some serious bang for the over-punned buck.  The features, accuracy, and quality make the MSR-10 Hunter a boon not only for big game hunters, but target shooters alike.  This is one rifle ready to go right out of the box, no customization required, other than stockpiling ammo, mags, and enjoying time on the range and in the field.  All that’s left for this Hunter is some camo coating.