Chambered in 9mm, the Sccy (pronounced sky) CPX-2 is a double-action semi-automatic pistol that has seemingly flown under the radar (no pun intended). I was made aware of it while small talking with my local FFL.

We were discussing triggers and Ruger’s revamp on the LC9 series when he mentioned the Sccy. “One of the best triggers I’ve felt,” he commented.

I’m a picky girl when it comes to triggers so I knew I had to test the Sccy CPX-2 out for myself. 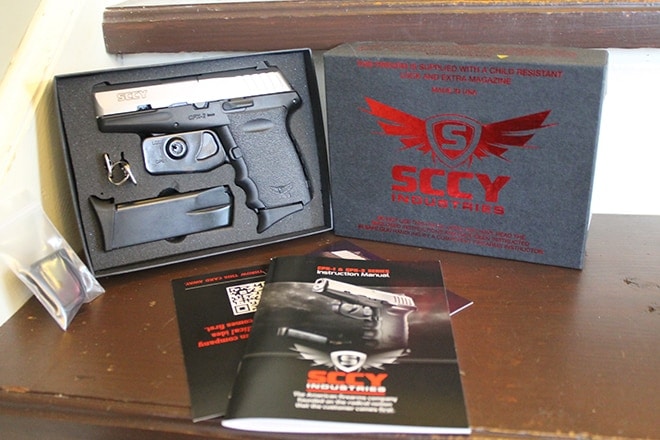 The good, the bad

The CPX-2 was nestled in the middle of a grey cardboard box with bright red lettering. A trigger lock secured the area around the guard. Two keys stood upright beside it and an extra magazine rounded everything out. It seemed like a neat little, all-inclusive package.

The CPX-2 is a compact, double action pistol with an internal hammer. It measures an overall length of 5.7 inches. It sports a double stack design and the included magazines can support up to 10 rounds of 9mm. 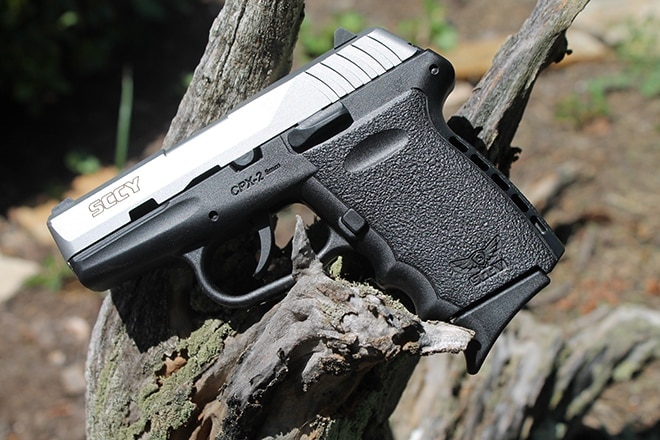 Sccy doesn’t hold back when it comes to color variety. Color choices for the CPX-2 total a whopping 16. They’ve got everything from Tiffany blue to green, pink, purple, and white. I received the two-tone for this review, which features a black Zytel polymer frame and stainless steel slide.

As far as looks go, the two tone wasn’t terrible. I felt the matte frame met with the dull stainless steel made it look a little too generic. I prefer stainless steel that is bright and pops against a black frame. This didn’t quite do it for me. 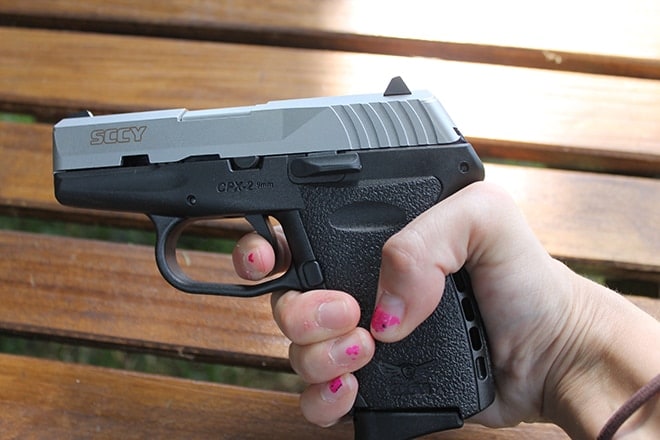 I found the CPX-2 to be very pleasant in hand. (Photo: Jacki Billings)

My feelings on looks quickly disappeared when I picked up and held the Sccy. It might not be a looker in the configuration I received, but it sure is comfortable.

I will preface any talk on the fit of this gun by saying that though I am petite, there’s a reason I was called witch hands as a child. I have small palms but extraordinary long fingers. The combination, at least in my case, made the fit of this pistol very pleasant. 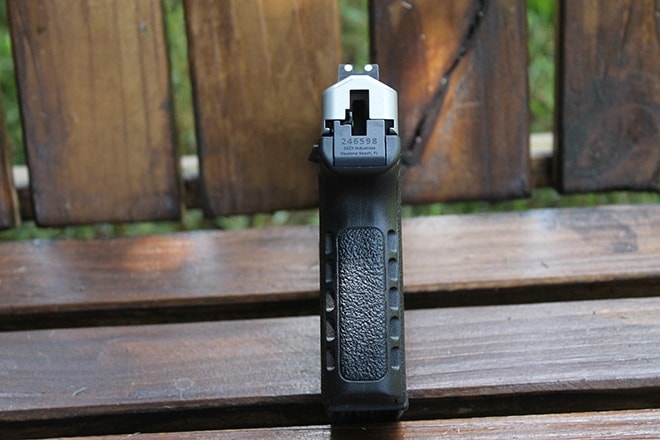 What this firearm gains in grip, it loses in the slide release. The release is nearly impossible for me to engage with one thumb. Every time I found myself struggling with it and eventually having to double thumb to get it to release. 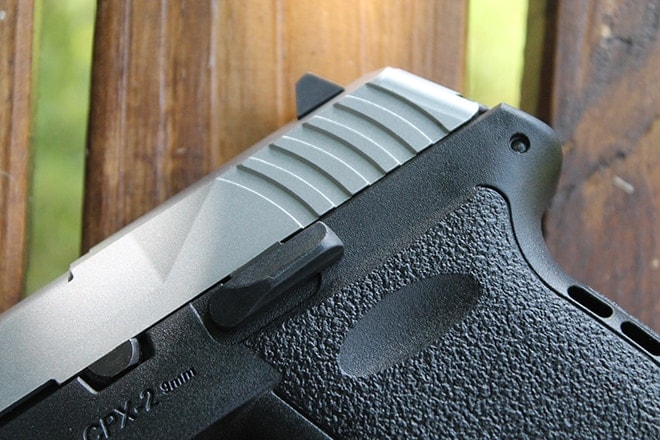 I found the CPX-2 slide release to be a nightmare. (Photo: Jacki Billings)

At the range this not only wasted my time but also increased my frustration. I eventually gave up on using the release at all and resorted to releasing the slide manually. I like my mechanisms to function well and with little effort; otherwise there’s no point in having them. It was, by far, the one portion of the firearm that disappointed me the most.

As mentioned, the Sccy was recommended to me as having one of the better triggers on the market. I’m picky when it comes to my triggers. I like resistance but not too much. I also can’t stand a mushy or a gritty trigger. It’s one of the reasons I don’t carry a Glock or one of the older Rugers. 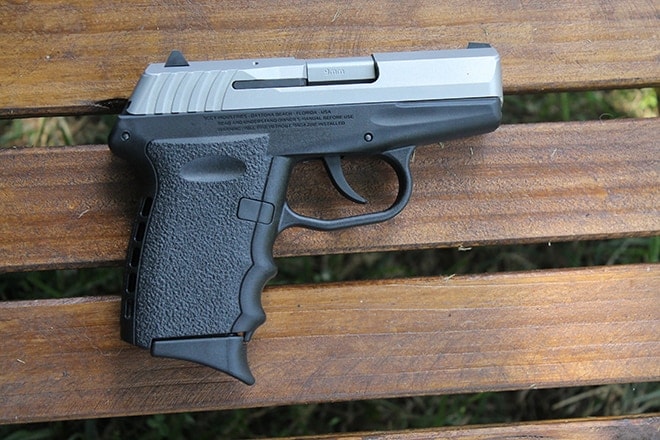 The trigger on the CPX-2 is a major draw for this handgun. (Photo: Jacki Billings)

The Sccy, for me, was near perfect. It’s smooth. Like that old SNL skit says, “like buttah.” It had no hiccups or glitches when traveling. It was just one smoothly coordinated pull.

It is a long pull. Typically, I prefer my triggers with a shorter one but because it is so smooth the length of it doesn’t really register on the range. I noticed it more fiddling pre-range than I did when shots were slinging downrange.

Overall, the lengthy pull combined with just enough resistance works for the Sccy. I would have to agree with my FFL: The CPX-2 has one of the better triggers on the market. 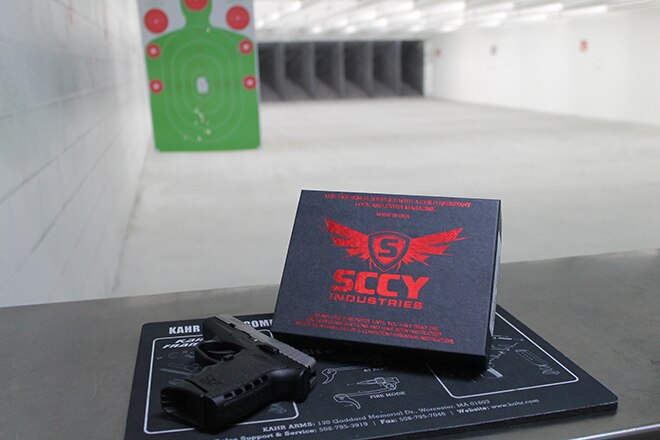 The Sccy CPX-2 did not have any malfunctions during my range tests with many of brands of ammo. (Photo: Jacki Billings)

My range time with the CPX-2 was quite enjoyable, despite my issues with the slide release.  I started my dreary Tuesday morning with just a few shots to get use to the feel and recoil. A couple rounds turned into two boxes of ammo in the span of about 45 minutes. Though it has some kick, it’s not enough to discourage any shooting. In fact, Sccy engineered the CPX with a recoil spring system designed to mitigate blow-back. It does as advertised and I think the recoil to size ratio is fair. 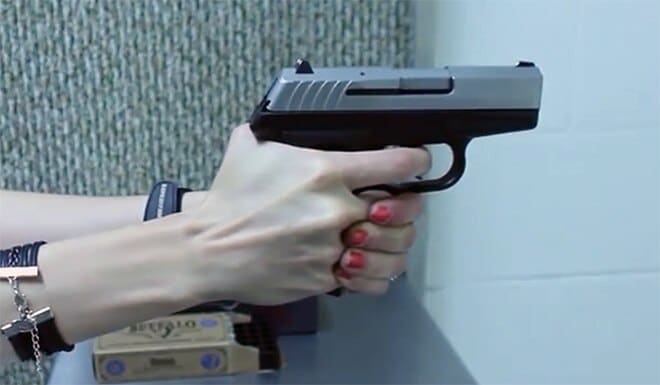 Recoil on the CPX-2 is appropriate for its size and I found I could shoot all day. (Photo: Jacki Billings)

Ammo pairing is a topic that I could write a book on, but in short form it is very important when choosing a defensive firearm. The right ammo has the ability to improve an already decent gun to the level of great. While conducting reviews, I usually buy a few boxes of ammo ranging from cheap white box Winchester to high end, expensive rounds. If the gun impresses me, I’ll occasionally throw some really cheap remanufactured rounds in there just to test the threshold.

The CPX-2 ate all my ammo like a champ, even the remanufactured rounds. Out of several boxes, I had no malfunctions with the weapon. It performed reliably every shot. Since the CPX-2 is small enough to conceal carry, reliability becomes a priority. Based off my range time, I would easily recommend it as a carry weapon. 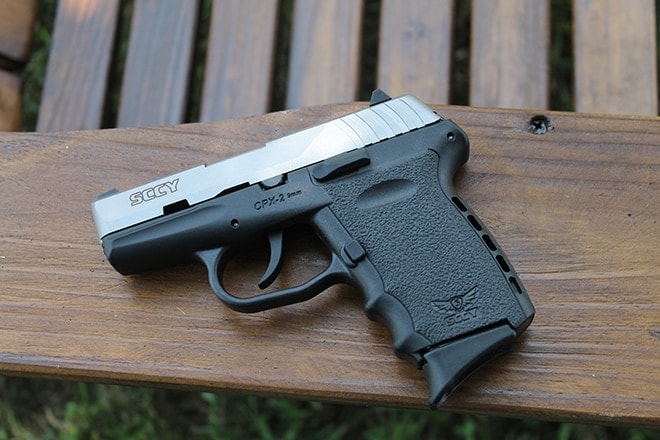 Retailing for $314, I’d recommend the Sccy CPX-2 for gunners that appreciate a solid trigger, prefer reliability and don’t mind flirting with fun colors. Though it still seems to fly under the radar, the CPX-2 falls into that category of enjoyable pistols at a decent price.