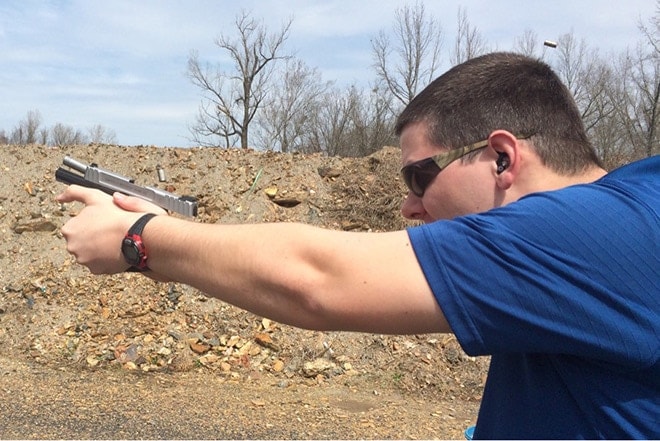 On the range with the modestly priced SD40VE semi-automatic handgun in .40 S&W. (Photo: Nate Parker)

In 2005 S&W introduced the M&P series of pistols. With welcome ergonomics, ambidextrous controls, and the backing of a company like S&W, many thought the M&P might be the “Glock Killer,” and actually usurp its almighty reign. Over ten years later, that hasn’t happened, and probably won’t. Glock still sits on the throne with a large share of the market and with new challengers in the ring like the HK VP9 and Sig P320, it is doubtful the M&P will ever have another shot. There is a dark horse though, also from S&W, that has been amassing a reputation and that could at least have an impact on Glock’s dominance of the polymer semi-auto market, the SDVE series of pistols. 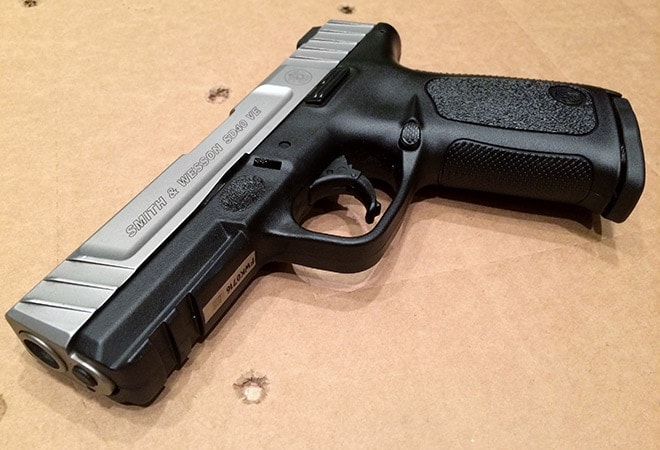 The SDVE draws its lineage from the S&W Sigma, which dates to the mid 90s, and the SD series. The “VE” stands for “Value Enhanced.” In essence, this means the manufacturing process and feature set was changed a little so that the firearm could be sold at a lower price point.

The subject of this review is a S&W SD40VE in .40 S&W. There is also a 9mm version. In fact, a test on pistol-forum.com of the SD9VE is what inspired this review. To be sure, the SDVE does not have a sterling lineage. The S&W Sigma was not exactly well regarded in the firearms community, seen as a cheap knock-off of the Glock, and in some respects it was. The question now is, how much has the SDVE evolved from its predecessors, and is it better for it?

Out of the box 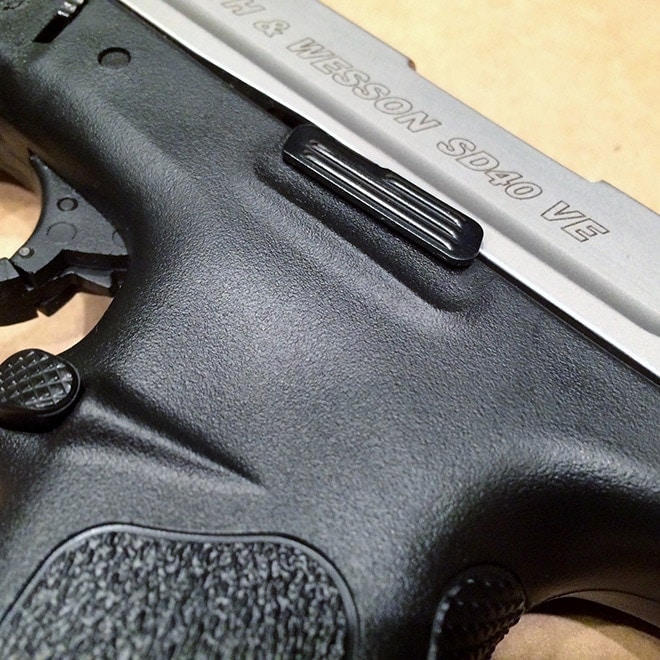 The gun comes with two stainless magazines and all the usual suspects (gun lock, manual, etc.). On initial inspection, I admit, I was impressed with the quality for a gun that retails under $350, and in some cases closer to the $300 mark. The lines of the gun are attractive, and the gun is comfortable in the hand. The front sight is steel and dovetailed into the slide, the rear sight is plastic, but beefy, and I suspect can handle a little more abuse than other manufacturer’s plastic sights.

One nice feature on the SDVE series of pistols is that the dovetails in the slide are the same as on the M&P series of pistols, so any sights that will fit an M&P will also fit on the SDVE. The SDVE shares a loaded chamber indicator design with the M&P, essentially a hole between the barrel hood and the slide, allowing brass to be seen in the chamber when a round is loaded. I prefer a tactile chamber indicator, something I can feel without looking, but this works. 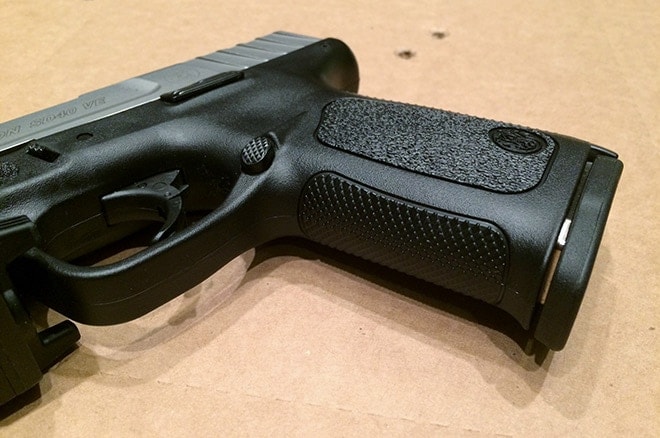 The rear serrations on the slide are well executed. It is always a balancing act between having serrations that are aggressive enough to allow quick, powerful manipulations of the slide, and having serrations that don’t eat your hands up in the process. Smith & Wesson did a good job here. The forward serrations on the slide are a nice touch aesthetically, but in a practical sense are a little too close to the muzzle for my taste. If they extended back another inch or so I would feel more comfortable using them. The front serrations also cause the slide to have a “waist” in the sense that the middle of slide is thinner than both the front and back. This can cause issues on tightly fit kydex holsters. In my experience, the holster either hangs onto the front of the gun or requires the use of a significant amount of force to get the gun to re-holster. 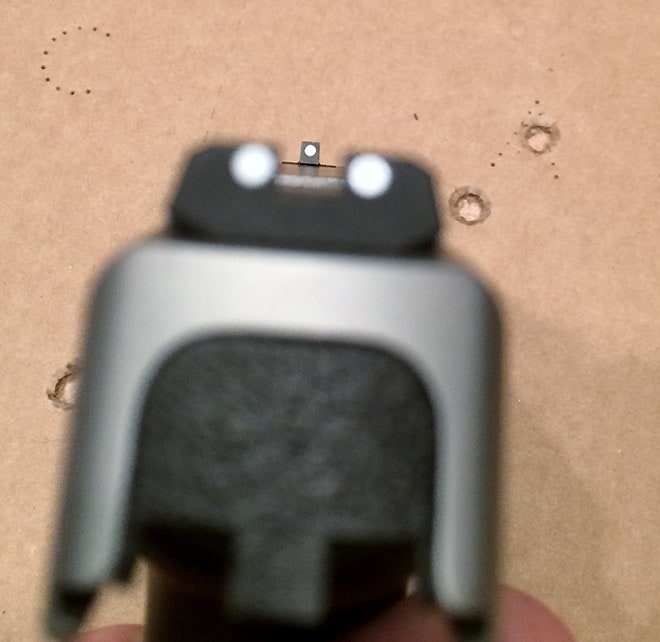 Moving down to the frame, the slide release is sufficiently large and the three ridges stamped into the release engage the thumb well. The magazine release is essentially the same as an M&P. The texturing on the sides of the grip and the front and back strap is aggressive, but not overly so. My only complaint is that the texture on the side does not extend further up the gun, but this is fairly typical of most handguns. There are small patches of texture on the frame just above the trigger guard, presumably for resting your shooting hand thumb on. I know some shooters that do that, I however do not contact the side of the frame with my thumb while shooting, so for me they serve no purpose. For others, they will be a nice touch.

The trigger is very M&P-esque in form as well. It has the hinged bottom half that serves at a trigger safety just like the M&P. The magazine well has a slight bevel to it, and the back strap extends flush with the base of the magazine. In my opinion, that makes it easier to accomplish a quick reload than with some other designs. 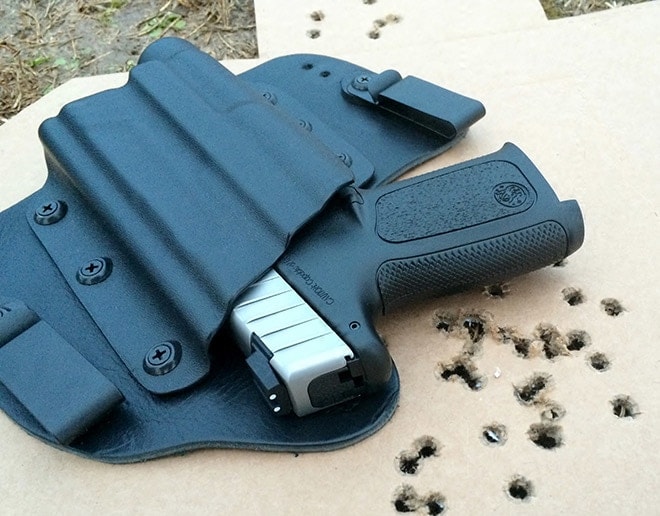 When you break the gun down, it is easy to see why the original Sigma caused Glock to take S&W to court. Even in the redesigned SDVE, the similarities are obvious — it comes apart just like a Glock. Press the trigger, pull down the takedown levers and remove the slide off the front of the frame. The slide and all of its individual components have a strong resemblance to Glock. The recoil spring assembly even looks like a Gen 3 Glock 19 or 23 recoil spring assembly. 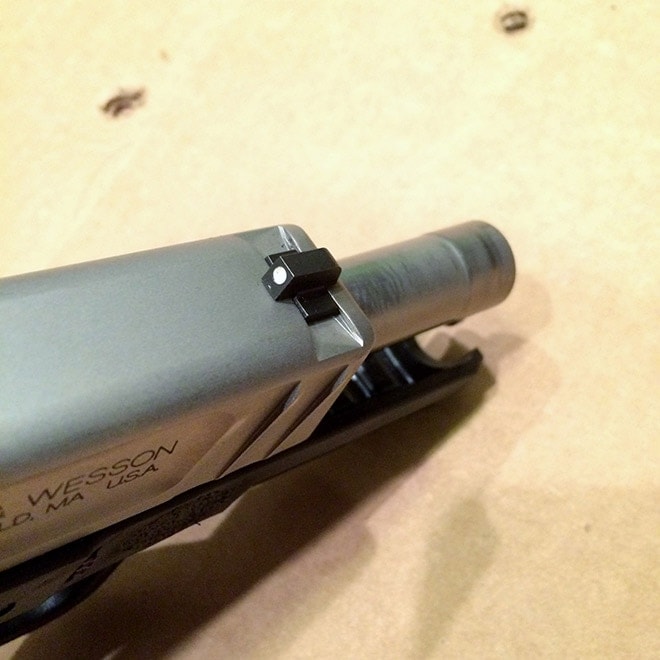 Where you start to see the dissimilarities between the SDVE and the Glock are in the frame. The trigger, trigger bar, and sear operate differently than that of a Glock. The trigger spring is located just above the trigger, the trigger bar and sear are two separate pieces and the trigger bar doubles as the disconnector as well. The design is basic, and certainly robust, but also probably part of the reason why the SDVE trigger is not as light or crisp as that of a Glock, which is saying something as factory Glock triggers are not known for these traits. 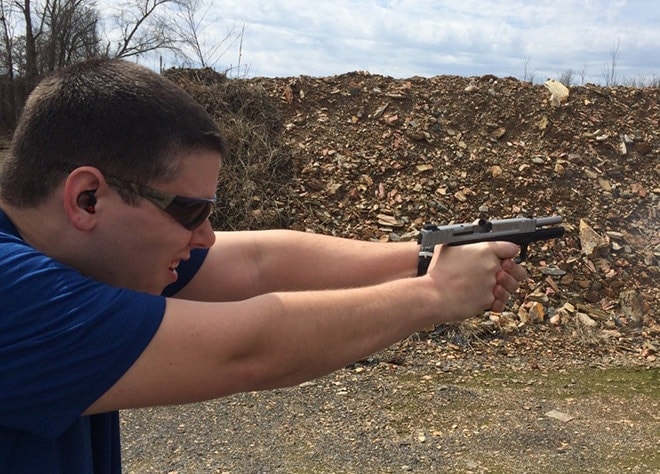 Trigger pull is heavy at 8 pounds, but I don’t mind. (Photo: Nate Parker)

All the aesthetics and design characteristics aside, when we get right down, all that really matters is how well the gun shoots. The predecessors to the SD40VE are all known for having less than good triggers, generally described as being heavy, gritty, and with a long travel.  Even though the trigger on the SD40Ve is a might heavy at around 8 pounds and stacks towards the end, after six months of shooting mostly revolvers, my first thought was, eh, not that bad. 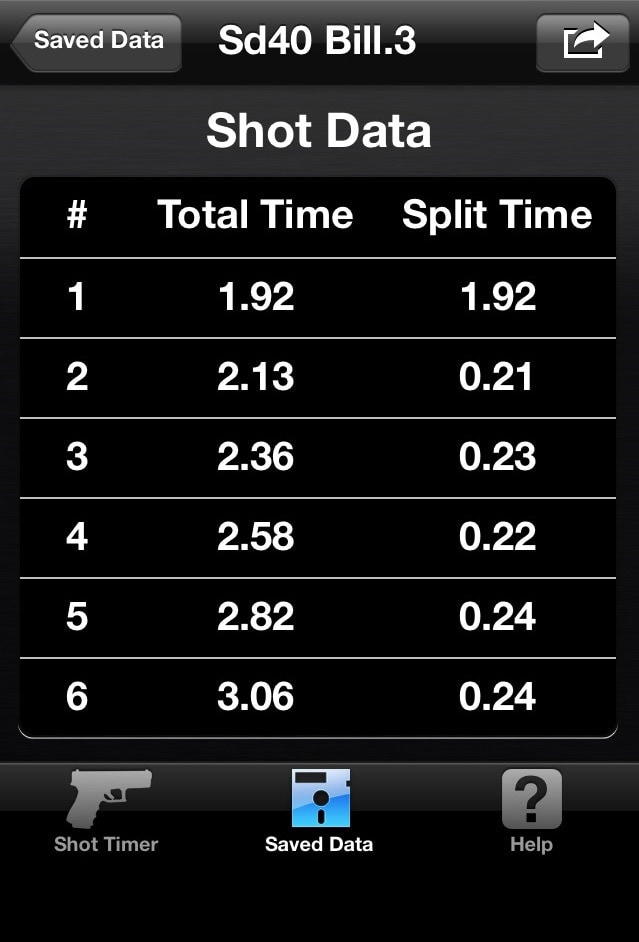 Results of a Bill Drill on a USPSA target at 7-yards with all hits inside the A-zone. (Photo: Nate Parker)

The trick is to be able to roll through the trigger press without stopping or staging the trigger. If you can do that, the accuracy is there. I did not find the trigger to impede my ability to shoot quickly either. On faster paced drills, the splits were right where I would expect them to be and consistent with where they land on other .40 S&W handguns. The reset on the trigger is more distinct than that of an M&P, but not as distinct as a Glock. I find it acceptable though. Overall, I would not detract points for the quality of the trigger as it was good enough to not degrade my shooting performance.

I found the sights to be adequate for work requiring a higher level of precision and shooting at speed at closer ranges. Oftentimes we don’t give much thought to having sights that allow both good precision shooting and good speed shooting, but I feel the factory sights on the SDVE strike a solid balance. There is ample space in the rear notch to have moderate “light bars” on either side of the front sight blade. This translates to being able to place the front sight in the rear notch quickly and easily. However, the downside to having too wide of a rear notch or too narrow of a front sight is that we lose some ability to reference the sight alignment, which generally leads to less precision. Obviously, there is some measure of personal preference biasing that assessment. Others may not come to the same conclusion. 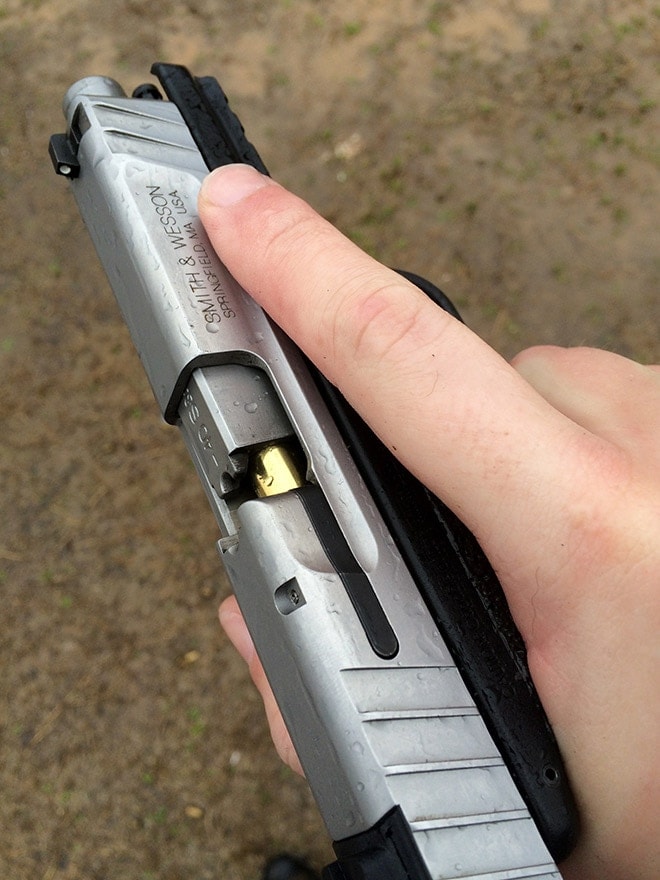 As I expected, not having the grip texture extend up the side of the gun as far as I like made the gun harder to hold onto than I am used to. All of my other guns have had grip modifications to suite my taste and shooting this gun out-of-the-box reminded me of why I did that to all my other guns. As a consequence, muzzle flip seemed noticeable, but on the clock the split times between shots where within an acceptable range.

In the 500 or so rounds put through the gun during the testing period it ran like a champ, until the very end. In the last 50 rounds fired the gun experienced two failure to feed malfunctions. A stout tap to the back of the slide returned the gun to battery, but still a malfunction. The shooting conditions weren’t exactly favorable, and the gun had not been cleaned either before, or during the testing period. 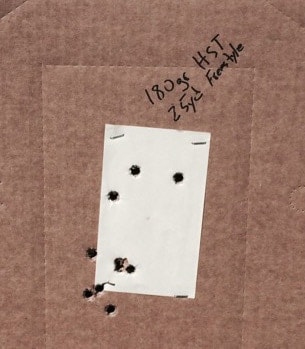 So is the SD40VE an improved version of its predecessors? I would say almost certainly that it is. The trigger, while heavier than some of the other mainstream polymer pistols on the market is not unmanageable — if the person behind the gun knows what they are doing.

The build quality appears to be on par with its big brother the M&P, and even though the gun suffered two malfunctions at the end of the test, I was okay with it. For the price point that the SD40VE sells at, I would say it is probably one of the best buys on the market today if you can get over the moderately heavy and long trigger press.