The full-sized SIG P210 has been around a long time and seen extensive service around the globe. The original P210 models were produced from 1949 until 2005, and have gone through several model variations. Then a couple of years ago SIG decided to re-introduce the P210 in a “Legend” model, accompanied with some minor changes. All the guns share excellent quality, impressive accuracy and a very hefty price tag. 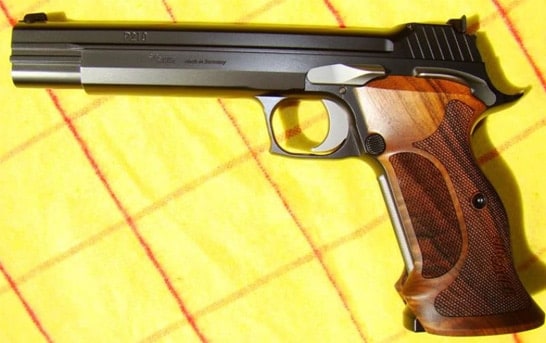 A couple years ago I had a chance to shoot a 2003 model known as the P210-5LS, which is a long slide with 6-inch barrel target variant, for the Ballistics By The Inch tests of the 9mm Luger cartridge. This review is based on that particular gun, but from all that I have read, seen and heard, it is very typical of the entire product line.

The first thing to take my attention was the quality – it was fantastic. The major components of the gun are milled from billets of high-quality steel. Everything is tight and polished – as someone else said online, the P210 is finished on the inside better than most ‘quality’ guns are finished on the outside. 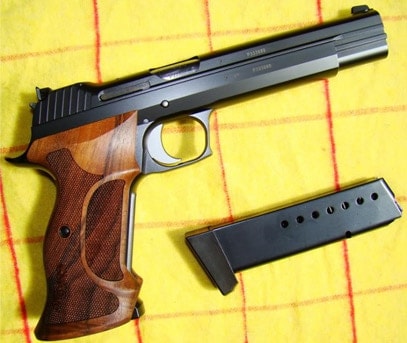 It may not quite be up to the legendary quality of a Korth, but it ain’t far off.

This quality means exceptional fit and finish. Nothing is just slightly out of place. Nothing is a ‘little rough’. The slide, which rides inside the frame rails rather than outside as is the case in most guns, has no play in it. The barrel is perfectly aligned and locked-up tight.

For the trigger, there is a long take-up, but this is by design and ‘stages’ the trigger so that when it breaks it is incredibly clean and smooth, adding to the inherent accuracy of the design.

The grips are walnut and two piece, but they wrap around the back strap they fit together so perfectly that at first look you’ll swear that it is all one piece. Magazines fit perfectly as well. The bluing is rich and durable. The operating controls – manual safety, magazine release, slide lock – are all definite and solid.

About the only thing about the design I didn’t care for was that the safety left a characteristic arc mark on the frame. This scratch can be seen on all the earlier models, but with the “Legend” re-design they corrected that.

The accuracy is very, very impressive. This was true of all the P210 line and one of the reasons why the gun remains popular with competitive shooters. Plenty of people attest that a 1-inch group at 50 yards could easily be achieved by a proficient shooter, but I’m not nearly good enough to attest to that. I did find, however, 2-inch groups at 25 yards were easy. I have no doubt that the gun could shoot far better than I am capable of doing. 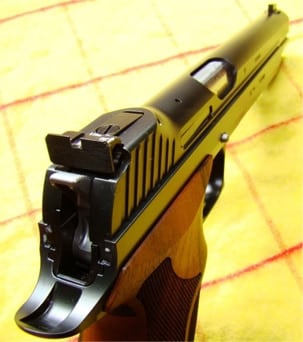 The target sights are quite nice. It is equipped with a simple thin blade front and fully adjustable rear. Since the BBTI crew only had the gun for an afternoon of testing, I didn’t mess around with the sights. But, as far as I’m concerned, I didn’t need to – it shot so well I didn’t see the point.

That’s because the guns are widely considered to be worth it – this isn’t just because of an artificial ‘premium’ from using rare materials or a lot of hand tooling. Rather, this is a proven firearm, one that has a long history of being accurate and reliable as a duty weapon for police and Special Forces. It also shoots very well. It tames recoil nicely because of the weight and ergonomic design (it feels a lot like a high-end 1911 to me). It is probably more accurate than most of the people who shoot them.

All in all, it is one hell of a gun. Built like a fine Swiss watch, one that will last generations. If you ever get a chance, shoot one. And if you own one, I’m jealous.