One of the most celebrated new guns at SHOT Show 2018 was the Sig Sauer P365, a subcompact 9mm. Sig Sauer shared a copy with Guns.com for review, and after a vigorous workout with six different shooters, we agree there’s a lot to be excited about, and one detail that needs work.

The P365 is a striker-fired handgun with a 3.1-inch barrel.  It’s an inch at the widest point, just 4.3 inches high, and 5.8 inches long.  All steel components are stainless; the slide is finished in Nitride. The polymer frame features a pebbled grip surface and rail. It weighs 17.8 ounces unloaded.

The pistol’s profile is rounded where it counts.  The magazine release matches the contour of the grip. The trigger guard is curved. The corners of the adjustable tritium night sights are beveled. Though these aspects contribute to easy concealment and drawing, it’s not rounded to such an extreme that it looks toy-like. It looks ready to get the job done, and it does.

How to win friends in the concealment market 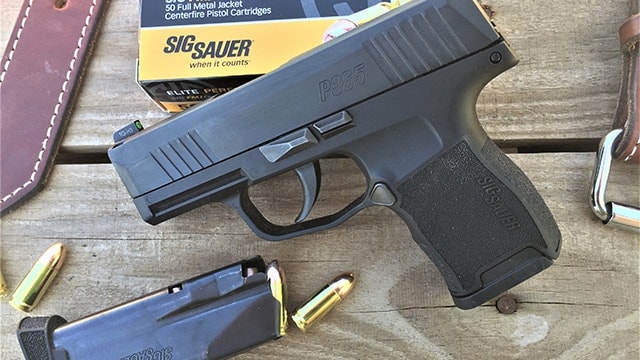 Let’s talk about the P365 magazines.  The two metal-body, polymer-floorplate-and-follower magazines included in the package look rather standard at first glance.  One has a flat bottom; the other sports a slight extension for pinky support, intelligently beveled and flat-bottomed for easier concealment and reloads despite the added material. It’s what they are in the inside that takes these mags, and the P365, to the next level.

These little magazines hold TEN ROUNDS! Yes, in a mag that looks like others that hold six rounds, Sig managed to squeeze ten. This alone is an answer to many a concealed carrier’s wishes. Even better, they’re easy-loading, clearly marked with numbered cut-outs for easy checking of how full they are, and, with one exception, they have functioned with many different grain weights and bullet types with no chamber-feeding malfunctions so far, having fired in excess of 300 rounds.

Want to go from EDC to long days at the range? Sig also offers a 12-round mag for $55. It’s also surprisingly small.

Relatively big magazine capacity in a compact package is what the concealed carry market has been begging for. Sig Sauer can rightly claim this huge win as their own. 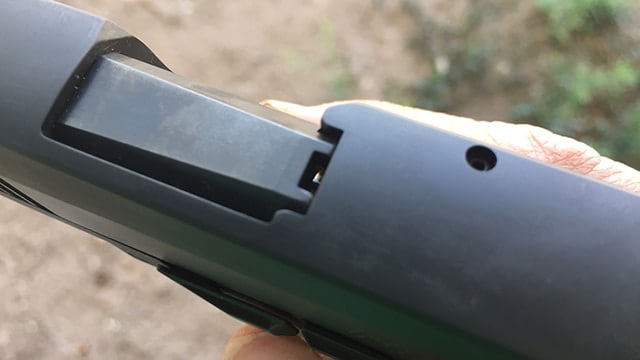 The loaded chamber indicator is a small cut-out atop the barrel. (Photo: Team HB/Guns.com)

Fans of loaded chamber indictors will be semi-pleased with the P365. Similar to a competing model, the M&P Shield, it sports a cut-out on the top of the chamber, a place to peer into for indications of shining brass. It’s better than nothing, but demands a real press check to confirm a hot chamber in dark conditions.

At approximately 300 rounds, the slide started to deliver the loading motion on its own about half the time upon having a magazine firmly smacked into place. Regardless of whether loading occurred that way, or by releasing the slide lock with a thumb, or by pulling the slide rearward and letting it slam home, it has never failed to put a round into battery. Because the “free loads” resulting from magazine insertion began later, we might assume there’s a break-in period for this firearm.

But how does it shoot?

In this series of trials, the P365 has been loaded with Sig Sauer 115 and 124 grain FMJ.  It’s fired various Remington FMJ and HP loads.  It’s fired Team Never Quit frangible rounds. Some mags have had different grain weights and bullet types mixed together. It has never had a misfeed or misfire. Some HP bullets that are more rounded than tapered seem as though they might get caught up as they tend to stick in the magazine lips, requiring a tiny extra push during loading. However, even these have presented no problems when fired. Reliability, to me, is the most important single factor in selecting a concealment gun, with the 10-round magazine on board, I feel this criterion is met.

Some testing included shooting off-hand and from kneeling at 25 yards.  I was pleased to discover every round had landed within the 12×18-inch target, with not a large amount of time spent setting up the shot, as these shots were done under the time constraint of my state’s daytime police qualification test.

Shooting at night, one-handed and with a flashlight, the P365 continued to deliver accuracy. Fast reloads were still attainable while my support-side hand was busy using the light. The slide lock is easy to reach with my relatively short firing hand thumb.  Releasing it that way still closes the slide hard and fast without pulling the spring back to full tension.  That’s very nice asset! The XRay3 night sights proved themselves on the night qualification; a missed round was my own doing.

The front sight is very apparent during the day; the rear dots more subdued.  At night, all three glow green in equally sized dots. Sig calls them XRay3 Day/Night Sights, an apparent departure from their usual Novak set.  I call them “thanks for including the upgrade I was going to do anyway.” 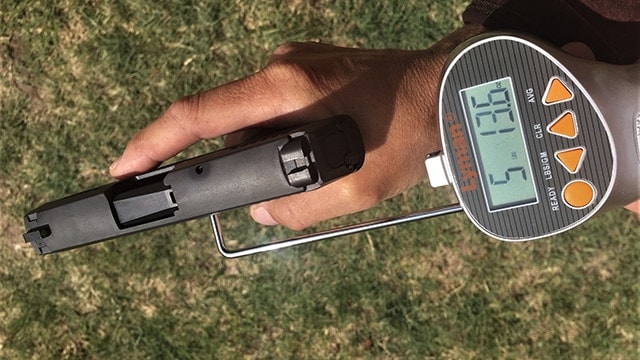 Looking at this handgun on the shelf, one might expect a long, double action-like pull.  It has the same shape and style folks are used to seeing on Sig DA/SA pistols.  But appearances deceive, and again the P365 delivers satisfaction.  A half-inch or so of travel is met with a consistent wall, where 1/16-inch or so of roll is felt before a clean break. Reset is a short half-inch or slightly more, and occurs with clarity and consistency. Break occurs at around 5.29 pounds of pressure. To my way of thinking, this is the perfect trigger for the everyday carrier who exercises trigger finger safety and wants to enjoy their carry gun at the range as well as for self-protection. 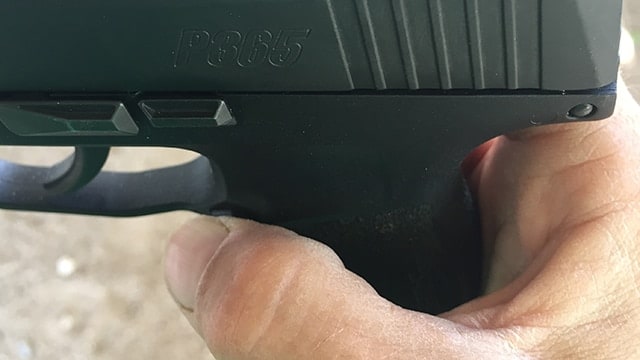 Two-o’clock on my thumb bone does the trick for releasing the mag, every time. (Photo: Team HB/Guns.com)

As mentioned earlier, the mag release is nicely contoured for easy concealment. It isn’t ambidextrous. It does drop the mags fast and without assistance, whether partially loaded or empty—a great feature for any test involving speed.

With much practice, I learned that getting the low-profile button to release the mag without a struggle required pressing on it with the bony edge of my thumb, at the two-o’clock position looking down on the thumb. It may of course be different for other operators, but the point on the release that requires direct pressure is an exact area.  This is a training issue that should soon be mastered by any new owner who takes their skills seriously.

This is a handsome firearm, and the matte finish of Nitron only enhances its classic look—until it gets fingerprints or sweat marks. These blemishes do wipe off but demanded repeated attention during filming so the slide wouldn’t look dirty or worn.  I don’t give a flip about finish if the gun works! But some people do, and they’re probably the same people who wouldn’t mind wiping their slide down on a regular basis to keep it fingerprint-free.

At first it only happened every so often. But north of the 200-round mark, it happens 100 percent of the time, if a human digit is in the vicinity of the slide lock lever during firing.  The slide’s not locking back when the gun is empty.  It’s happened with all seven people who’ve fired the pistol.  It’s an unexpected anomaly for a gun that’s on the upper end of the price range for subcompacts.

Another 100 rounds of test-firing included experimentation with left- and right-handed shooting, using two hands and one, plus a close inspection of the components involved. What we found is series of narrow, horizontal ledges, beginning with the flange on the left side of the follower, proceeding to the base of the slide lock, and ending with a slim notch on the inside of the slide. Each of these three aspects shares a very narrow interface—nothing radically different when compared to other subcompacts. If anything, there appears to be less material comprising the slide lock than on some other models. Under perfect (absolutely nothing touching the lever during recoil) conditions, this slightly precarious balance works well. Under normal operating conditions, it fails frequently—nearly 100 percent of the time when the gun is fired with a two-handed grip using the right hand as primary. 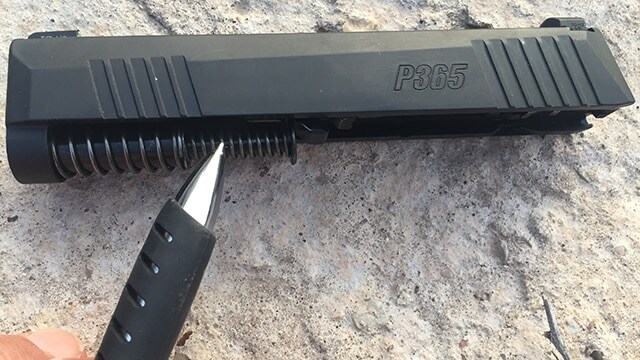 There is no outwardly visible slot for the slide lock lever on the slide. The pen tip indicates its location on the inside surface. (Photo: Team HB/Guns.com) 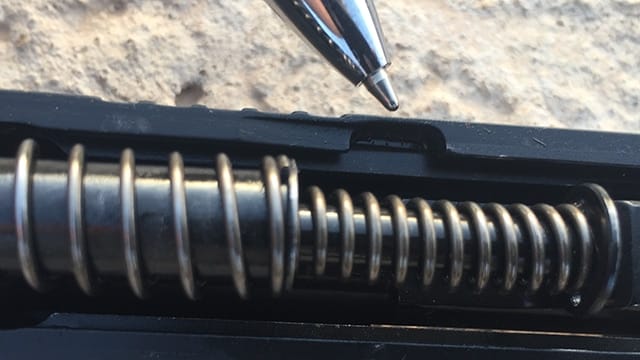 The pen points to the slide lock lever interface point inside the slide. The slide has no external lever notch. (Photo: Team HB/Guns.com)

An interesting, sleek-looking, but perhaps related trait of the P365’s construction is that there’s no cut-out for the slide lock on the outward-facing wall of the slide. The notch is entirely internal.

The lock-back issue makes the system less than perfect.  Still, it works in the context of this gun’s intended use. Chances of a defensive encounter expending more than 11 rounds are slim. In this reviewer’s opinion, it’s a gun worth committing to for everyday carry. Training for efficient reloads should be part of every concealed carry routine anyway, and herein we find inspiration despite the comfort of having more rounds to begin with.

By using my thumb-bone as described earlier, a technique mastered with practice on the P365, I easily passed a couple moderately difficult, timed qualifications with the added delay of drawing from concealment.  Every shooter’s hands are unique; my method won’t work for everyone. It’s incumbent upon every gun user to know how to operate their firearm. The sleek contour of the mag release is simply an indication of where all users of the P365 should focus some practice time. 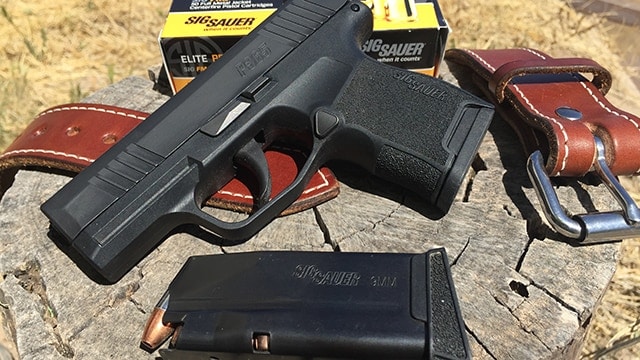 Sig Sauer has produced a darn fine firearm in the P365 and has raised the bar for concealment gun capacity and reliability. It’s my hope the lockback issue might be resolved with changes to future magazines, so today’s owners can resolve the issue with new magazines when this error is fixed.

I’m no mechanical engineer, but I get to play with a lot of results of the craft. Allow me to venture a guess that a stiffer magazine spring might resolve the slide-lock issue by exerting more upward pressure onto the lever, thus solidifying its engagement with the slide when in the rearward position. Of course, that might lead to complaints from consumers who don’t like hard-loading mags, trading one training issue for another. Given the choice, I’ll take the one I’m much more likely to do in my downtime than in a gunfight or friendly competition.

There’s so much to like, and one unfortunate anomaly, with the P365. To my mind, its performance and capacity outweigh the fact that running the mag dry makes it, momentarily, more like running an AK than a little carry piece. With a price point of $599.99 and real prices currently very close or exceeding that after local add-ons, Sig needs to address this error and keep making these wonderful pistols. I’m looking forward to seeing future iterations in new colors, and dreaming there’ll be a compact-size companion in the future.