If you’re looking for a .357 Magnum revolver the Smith & Wesson 586, also available as the 686, would certainly be suitable for most needs and will remain that way for some time, as the company announced that they will be re-releasing it.

However, if it’s not in your interest to buy it at the new asking price, the used models are still certainly a viable option.

The Smith & Wesson 586 was introduced in the early 1980s and the overall design has gone through several slight modifications since then. It has been offered with various barrel lengths from 2.5, three, four, six to 8.375 inches. Most are designed with a six-chambered cylinder, but some with seven chambers are available too.

There were two models available with the difference being the external finish. The S&W 586 is the blued version while the S&W 686 is the stainless steel one. 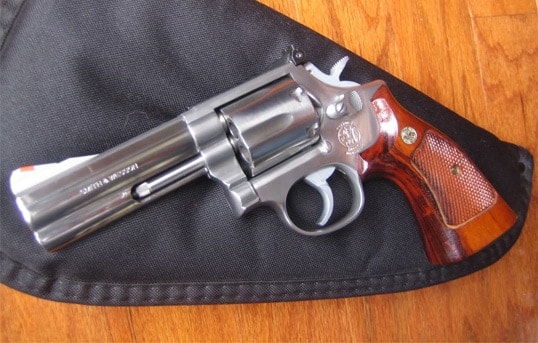 I have had the opportunity to shoot a number of these guns over the years, but this review is based on that general background supplemented by shooting a S&W 686 with a four-inch barrel. The original tests were for the Ballistics By The Inch tests of both the .357 Magnum and .38 Special cartridge. That particular handgun had a six-round cylinder and the more characteristic target sights, meaning a front ramp with red insert and rear notch fully adjustable.

The S&W 586 was built on what Smith & Wesson calls its L-frame, which the company defines on its website as “a strong, durable frame and barrel built for continuous Magnum usage. As police officers and hunters will attest, this firearm is made to withstand heavy use.”

While the description is not an exaggeration, what it isn’t saying is that the L-frame, or S&W 586, was intended to resolve some minor problems and complaints folks had with the K-frame, the forerunning S&W frame-design for .357 Magnum. The main concern was that the less robust K-frame wasn’t capable of handling the hot .357 loads overtime, so it would wear on both the gun and the shooter.

The Smith & Wesson Model 586 is a good gun and was quickly welcomed by the firearm-shooting public. As one would expect from Smith & Wesson, the S&W 586 is well made.

The fit and finish are excellent. The trigger is good, but there are some minor modifications in the variants over the years – a lot of people consider the older guns to have a smoother, more reliable trigger. This could be due to a slight design change in the trigger group, or it could just be the fact that older guns have probably been shot more, so they’re smoothed out.

Many people compare the 586 to the Colt Python. While I’m a Python fanboy, I just consider the S&W 586 to be a very good revolver. But, true, it could be a reasonable alternative to the Python, depending on what one wants to use it for.

As you may have guessed, the S&W 586 has a robust design and is less likely to develop timing problems if you shoot a lot of full-house .357s. In terms of handling, the 586 has excellent ergonomics and it is easy for me to shoot it well. The ones with the longer barrels are better balanced and more suitable for target shooting. The 586 “L-Comp” variant, however, is probably superior for carrying because of its three-inch barrel and seven-round cylinder. 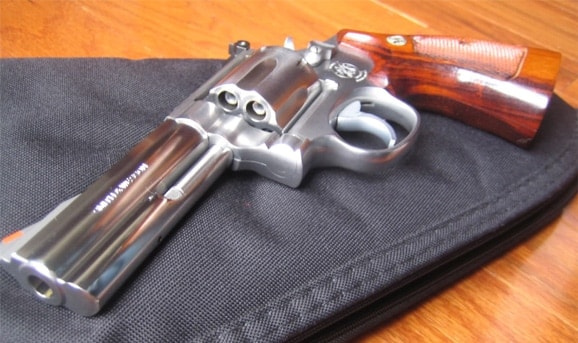 There are S&W 586 and 686 models that have been offered with fixed sights. Though it has been a while since I shot one, but I remember the sights to be quite good. Plus, I like having fixed sights for carrying purposes.

The four-inch 686 shot for the BBTI tests was very accurate – about as good as any full-sized handgun I’ve shot. Shooting freehand, three-inch groups at 25 yards should be possible for any good shooter using this gun, and bench-rest shooting likely offers even better accuracy at 50 yards or longer.

Since the S&W 586 has been around for more than 30 years, there are plenty of accessories available. Just as there are a lot of used guns in this model line. The Smith & Wesson quality for the 586 and 686 line is quite good, and I don’t recall of any major problems with them.

If you want to save some money, or get one of the older guns because you have a preference for their design or parts differences, then you should be able to trust that the S&W 586 is in good condition and will give a lifetime of service (as long as it wasn’t obviously abused by a previous owner).