Too often a well known gun manufacturer will market a concealed carry pistol ad nauseam, get everyone’s hopes up, and then on the official release date fail to provide an adequate number of units to satisfy the public’s needs. In the end, the consumer loses interest in searching for something that simply isn’t available and settles for a gun that is.

Smith & Wesson was able to avoid that situation with its new 9mm handgun, the Shield.

Last month the iconic company released the Shield with a stockpile of units already on their way to stores. Although some consumers prefer to wait for reviews, the Shield was cut from the same cloth as the respected M&P line, and in turn is supported by its clout. But Smith & Wesson did the public one better: the company priced the Shield at the competitive rate of $449. Because the Shield is affordable, available and a quality-made product, it naturally earns a spot as one of the top ranked concealed carry pistols in the market right now.

Why buy the Smith & Wesson Shield

Although the M&P line is a reputable brand that has a variety of user-friendly features, the Shield’s design is actually somewhat limited. The Shield has right-handed controls only and a fixed medium-sized palm swell, and while some may see that as a step backwards, the features were actually sacrificed to reduce the overall width to less than an inch, which is how a lot of subcompacts are designed anyway. 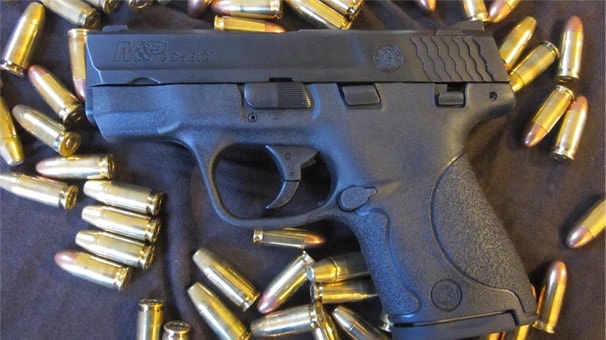 Upon introduction, Smith & Wesson was prepared to ship the Shield to retailers. The company had something like 5,000 ready to go. (Photo by Daniel Terrill)

Size- and price-wise the S&W Shield isn’t much different than the Ruger LC9—the gun Smith & Wesson says is the most comparable concoction by a competitor. Both guns are around six-inches in overall length, a little more than four in height and they both cost about $450 new.

But where the Shield has the edge is it is part of the M&P line. I might be stepping on some toes here, but when I think “duty gun” I think M&P before I think Ruger. Though, Guns.com certainly recommends both for concealed carry, if one had to choose between the two it seems like the decision would be based on brand.

Besides price and conceal-ability, one of the most interesting traits about the Shield is all the gear that is available for it. The iconic manufacturer collaborated with numerous accessory and holster makers to get that part of the market up and running—something that typically happens a few months after a new gun is released. Theoretically speaking, the Shield and its accessories are now just as available as its competition. 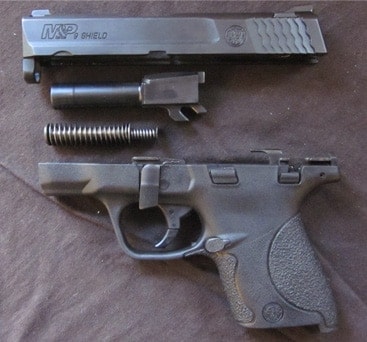 There is a lever beneath the chamber that must be switched on before the Smith & Wesson Shield can be field stripped. That lever disables the trigger. (Photo by Daniel Terrill)

As mentioned earlier, the Shield has right-handed controls only, which includes a magazine release, easy takedown lever, slide stop and manual safety.

All the controls are familiar and easy to operate, however, I’ve heard some criticize the manual safety, but what they fail to realize is the safety is difficult to engage with the users dominate hand.

It’s easier to swipe the safety down making it ready to fire than it is flipping it up disabling the trigger, which leads me to believe that the manual safety is more for storage than carry.

Brand new, it comes with two magazines: a seven-round mag that fits flush with the grip, and an extended eight-round magazine that allows the user to get a pinky on board.

Also mentioned earlier, the Shield has a fixed medium-sized palm-swell, which, according to S&W, is the most commonly used palm swell. The grip is a comfortable size and it didn’t rotate or shift in my hands while firing.

Otherwise Smith & Wesson kept the Shield aesthetically similar to other M&P semi-auto handguns. It has the signature serrations on the rear of the slide, the M&P logo near the muzzle, the black Melonite finish, the 18-degree grip angle on the Zytel polymer frame and a carved outline of the texturing on the back of the grip.

The S&W Shield can feasibly be a range gun—that’s how smooth it shoots. Even with a two-finger hold it’s still very controllable. The Shield, like all M&P pistols, has an 18-degree grip angle, which, according to Smith & Wesson, contributes to its “pointablity”—an industry term that means “points with ease.”

But accuracy is still just as good as the person pulling the trigger. It was very easy to keep a tight group at 25 feet—about 1.5 inches—however, back to the pointability of the pistol, it’s also easy to keep an effective group just by pointing—say four inches at 25 feet.

The trigger was also rather smooth and it was easy to intuit the break. Lastly, recoil was very mild. The Shield has enough heft to tame recoil and minimize muzzle flip. Although, I can say that for the 9mm model because that was the one tested, but there is a .40 S&W model available as well. 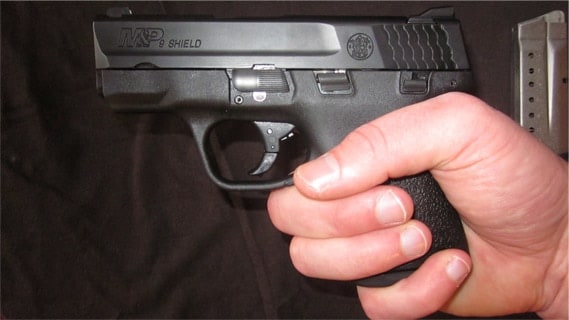 Unlike other M&P pistols, the Smith & Wesson Shield has a fixed palms well. With a flush magazine, the user should be able to wrap two fingers around the grip. (Photo by Daniel Terrill)

A standard M&P feature is interchangeable palm swells, so the user can change the girth of the grip. Like I mentioned earlier, the Shield lacks this feature.

While this probably won’t change (and it doesn’t bother me if it doesn’t because the size is good), I’m wondering if there’s a way to improve upon the grip texture. The grip texture is fine for the compact and full size models, but with the shorter grip it’s inherently more difficult to hold. Of course this problem is easy to rectify, but it would be more convenient if the company did it for you.

If you have the opportunity to buy a Smith & Wesson Shield, go for it. Logistically Smith was prepared to distribute and sell its new self-defense pistol—one that stems from an already reputable brand, so automatically it ranks among the top tier of concealed carry guns.