The Smith & Wesson 686 is a big revolver.  Chambered in .38/.357, the 686 (with a 6-inch barrel) is close to a foot long.  When loaded, it weighs in around 3 pounds.  The size and weight are part of what define the 686. They are commonly made with 4- and 6-inch barrels, though numerous variants exist (including some factory models with 8-inch barrels).  This size makes them very hard to conceal, and the weight will feel even heavier at the end of a long day. But that’s part of the appeal.

The small J frame .357s have very little recoil-absorbing mass.  Though easy to conceal, they are hard on the hand.  And some shooters are comfortable with open carry, and want the added accuracy and ballistic energy generated by the longer barrel.

The L frame 686 is between the J and K frames on the smaller end and the heftier N frame, which houses larger calibers like the .44 Magnum.  Most of the L frame guns have a barrel lug under the barrel that extends all the way to the muzzle.  This extra weight changes the balance point, but helps keep down muzzle rise.

The sights on the 686 are exceptional.  The adjustable rear has a slim white outlined rectangle notch.  The front post has an orange section that is easily visible.  The pair combine well and a sight picture can be picked up reasonably fast.  I would say the sights are a compromise between more accurate target sights and faster three-dot sights.

One of the nice elements of the larger frame is the potential for another round in the cylinder.  The 686 plus has seven rounds.  This seventh round can be tricky for those who aren’t used to the extra.  I’m trained on six, and had to remind myself each time that there was a seventh ready to go.  It is like an amplifier that goes up to eleven. 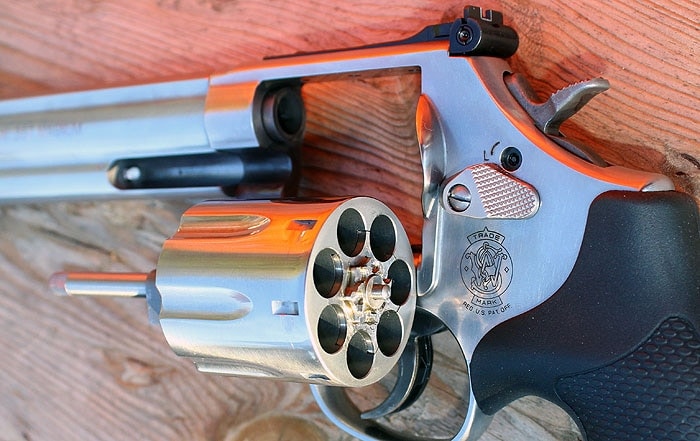 The extra chamber doesn’t make it any harder to holster.  The 686 is frequently worn strong side, or cross-draw.  I’m partial to cross-draw, which is easily (somewhat) hidden underneath the tail of coat.  This DeSantis Dual Angle Hunter allows for either, and has the added security of a tight thumb closure (that doesn’t ride on top of the rear sight). 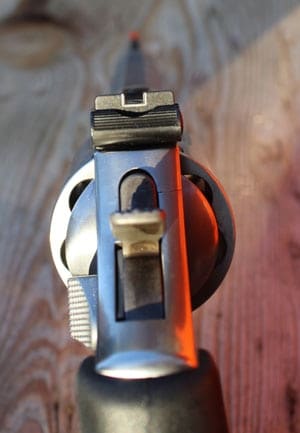 The rear sight of the 686 is adjustable.

The double action of the 686 is very predictable.  After a little practice, I could aim the gun while pulling the trigger back (knowing that it wasn’t going to surprise me).  That’s not easy for me, as I much prefer to shoot in single action. And the 686 is even better for that, as the large exposed hammer makes it easy to cock with either the shooting hand (which is very disruptive to rapid, repeat target acquisition) or with the support hand (which is the way to go).

If you watch the video above, you can see the recoil from the .38.  It is minimal.  There is a slight rise on the muzzle, but nothing that would compare to a full sized 9mm.  There is one moment near the end of the video where I’m holding the camera on my arm and shooting one handed.  At more than 25 yards, I could hit everything.  Steel plates aren’t great for measuring tight groups, but they’re really gratifying.  I’m especially fond of the tink of the small 6-inch plate.

But group size doesn’t matter half as much as hitting what you’re aiming at, reliably, from varying (and uncertain) distances.  And that’s what the 686 delivers.  Yes it is a great competition gun (even better when the trigger has been lightened).

Shooting is one thing.  But it is still not easy to find .38 to practice with these days.  That’s where a revolver, especially one with seven chambers, has the advantage over an automatic.

When I first shot the 686, I was overcompensating for the weight of the gun by putting too much finger on the trigger.  My pull was too hard, which moved the gun unnecessarily.  But load five in the cylinder, spin it good and shoot normally.  When the hammer falls on an empty chamber, the gun shouldn’t move at all.  If it does, it is your fault. 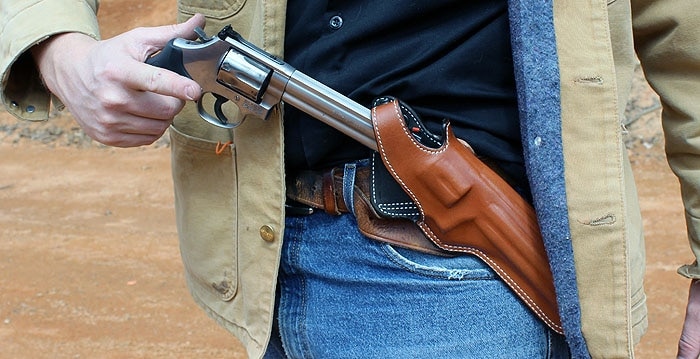 A friend recommended putting a dime on the barrel behind the front post and practicing trigger work (with the gun empty).  If the dime falls when the hammer falls, you are moving too much for bulls-eye accuracy.  But it is a great way to practice both trigger work, cocking, aiming, and concentration.  While it can be done with any revolver, the size of the 686 shows all of your shortcomings very clearly.

The 686 was launched in 1980. Thirty-three years later, it is still going strong.  While the revolver may have fallen off a bit recently, the 686 remains a hugely popular gun in rural settings.  It is the ideal gun for ranchers and farmers.  It is just as useful for loggers and foresters.  There isn’t much on this continent that the .357 won’t dispatch, if aimed well. 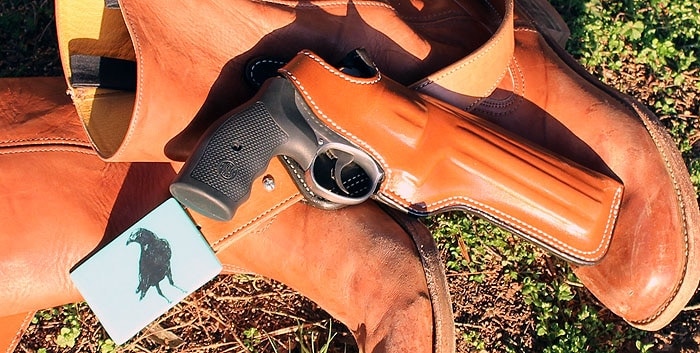 I’ve been carrying the 686 when I hike and dink around outside for long periods of time.  I find the weight of the gun comfortable, not a hindrance.  I like knowing that I can hit anything withing 50 yards with almost no effort.

The price tag on the 686 stays around the $829 mark.  I’ve seen clean used 686s sell for $600 or so.  Both Ruger and Taurus make guns that are close approximations of the 686, and they may perform as well, but they don’t hold their value as well.

One thing I noticed recently was that a lot of shooters were trading in their big revolvers for automatics.  I think this had much more to do with a fear that certain guns might be banned.  At one point in February, there were four used 686s for sale at my local gun store.  Now, there are none.  I know why.  They were traded in because there was no chance that any ban would affect a revolver.  But now that it looks like things are settling down, and that same gun store is once again flush with Glocks and SIGs, those 686s have gone back home.  Where they belong.