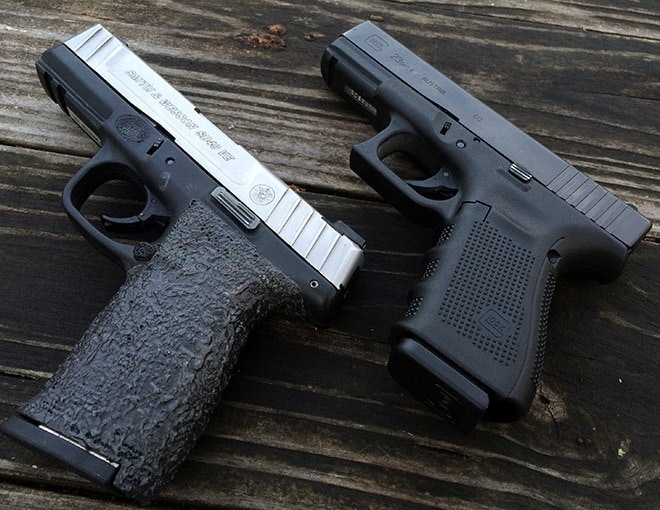 In my review of the Smith & Wesson SD40VE, I alluded to the Smith & Wesson perhaps being a challenger to the venerable Glock, in this particular case, the Glock 23. The Glock pistol, in its various forms, has become the standard bearer for “polymer defensive pistol” it seems like. I am uncertain if it is because the Glock was the first polymer pistol to gain widespread use, or if it is really just that good. Everything gets compared to the Glock, so why not the SD40VE. I think what we find may be a little surprising.

If you are not familiar with the SD40VE or SDVE series of pistols from S&W in general, you can read my review of the SD40VE here. I was impressed with the pistol then, and I am still impressed now. At the price point that it retails for, it cannot be beaten. So what are the things I think S&W did better you ask? 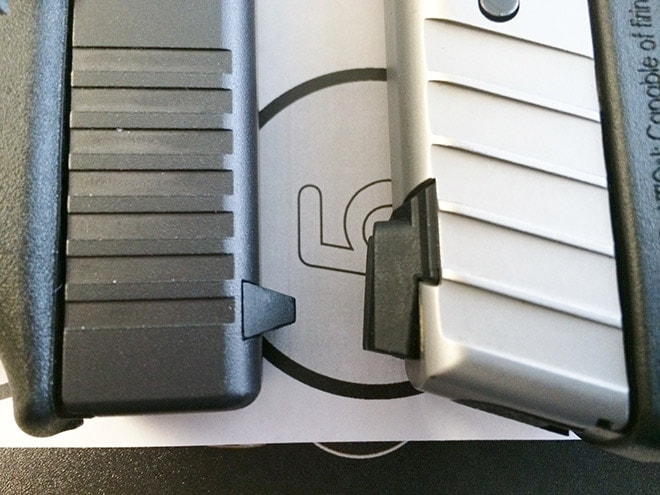 Every Glock pistol comes from the factory with notoriously crude plastic sights. In fact, some don’t even call them sights; they call them “dovetail filler”. The SDVE series of handguns from S&W come with a metal — dovetailed from sight, and a plastic, but very robust rear sight. The reason I point out that the front sight is in a dovetail as opposed to mounted with a screw is because it makes the sight easy to replace to the user’s preference without any special tools. The same is true of the rear sight, but so is true of the Glock.

I know many people will probably disagree with this, but the Glock magazines, while generally robust, hinder the design in two ways in my opinion. They attract dirt and consequently tend to stick in the magazine well, and they are difficult to disassemble and clean. Those two attributes work together to make Glock magazines one of my least favorite parts of the overall design of the Glock. 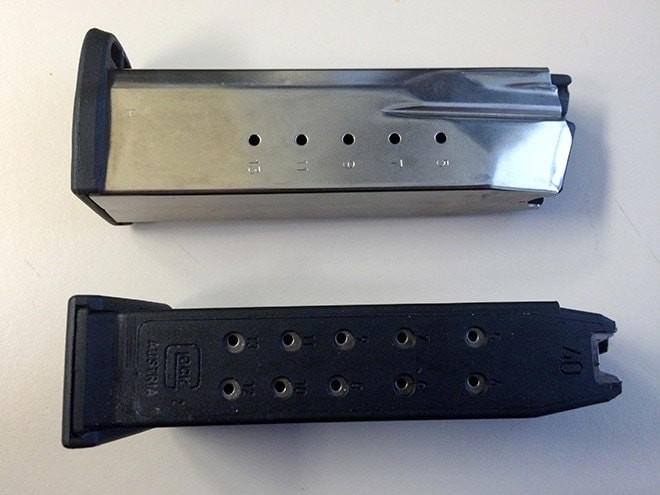 The SDVE on the other hand has two metal magazines, still robust and durable, yet these fall free from the gun under almost all conditions and are easy to disassemble and clean when necessary. When you have had to clean Glock magazines in the middle of a training day because the range deck was muddy, this makes a difference.

The slide stop/release on the SDVE is leaps and bounds better than the factory Glock 23 slide stop/release. They are both made out of stamped metal, and generally function in the same way, but the S&W part has a significantly larger engagement area. This makes it easier to both release the slide via the slide release if desired, or to lock the slide back to clear the firearm or perform some other function that requires the slide to be locked open. I have seen more shooters struggle with the minuscule slide stop on the Glock than I care to count. That is also why there are companies that produce improved slide stops for the Glock pistols. The slide stop on the SDVE is pretty much good to go — not much to improve there. 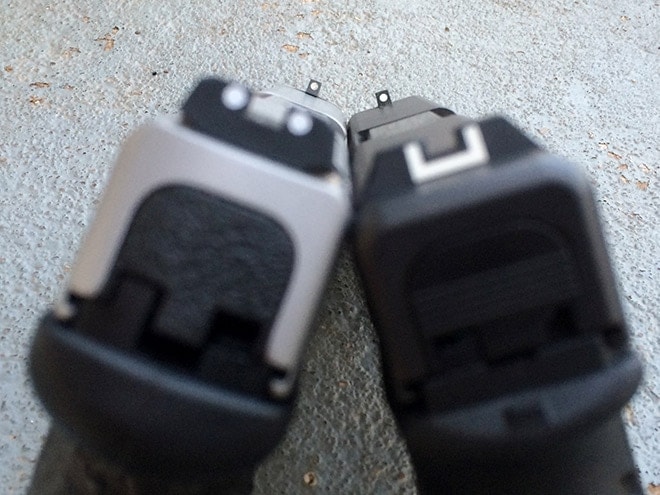 Now this is really going to ruffle some feathers. Trigger characteristics are all about personal preference. Some people like a glass rod break type of trigger, similar to what you might find on a high quality 1911 or other single action pistol. Others like a trigger that rolls through the break, similar to a double action revolver, or maybe a Kahr pistol. Most people who like the glass rod break type of trigger will probably gravitate towards the Glock. The thing is, as a trigger that is supposed to emulate that characteristic, the trigger on the Glock is famously not that great.

The SDVE on the other hand has a trigger that rolls, very similar to a double action, but significantly shorter. I actually prefer this type of trigger. It is actually easier for me to shoot with a high level of precision with this trigger than with the Glock trigger, especially when trying to shoot a small target quickly. Even with the factory springs and the 7-8 pound trigger pull, it just works better, and I think most people who understand how to press a trigger and, give themselves some time to adjust, will probably come to the same conclusion.

So what does this all really boil down to? Smith & Wesson was able to produce a gun that is probably just as reliable, just versatile, has some improvements over the factory Glock, and it only cost $300-$350. Let me say that again. The SDVE series of pistols from Smith & Wesson can do just about everything a Glock can (no replaceable back straps), and for $200 less. Even if buying a “blue label” Glock meant for Law Enforcement sales, the SDVE is still cheaper. Something to think about.