Arsenal makes exceptional guns.  The SLR-106 line is no exception.  While most AKs have some association with the Soviet era calibers (either 7.62 or the later 5.45), the SLR-106 is chambered in 5.56.  This made the rifle popular with AR shooters and others who wanted the availability and performance of the American round.  Yet the rifle must not be popular enough to justify its continued production.

I’m sad about the SLR-106’s demise.  But I’ll press on with the review.  The SLR-106-31 is a full sized AK rifle, at just over 3-feet long.  The black polymer furniture is sturdy and indestructible.  The guns are finished in a black phosphate, which makes them highly impervious to the elements.

Like most AKs, the magazine release is a simple lever in front of the trigger guard, and the charging handle is on the right of the receiver.  And the receiver is stamped and riveted.  The chrome lined, hammer forged barrel is a touch over 16-inches long.  With a full magazine, the SLR-106-31 weighs in over 8 pounds. 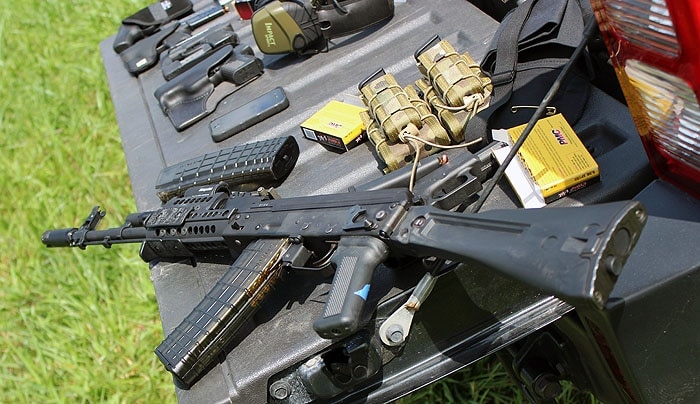 The stock on the 31 folds and latches on the left side of the stamped receiver.  The button that releases the extended stock requires some breaking in.  A folded stock can be unlatched by simply pushing a button on the buttstock.  Once released, the stock is short (Warsaw Pact Length — just over 9 inches).  Tall shooters, like me, have to get comfortable with the gun really close to their faces.  But that’s true with a lot of AKs.

The SLR-106-31 comes with a five-round magazine.  That may seem like a joke, but the short magazine is useful for sighting in the rifle or going prone.  The 30 round magazines can sometimes get in the way.  And finding standard capacity magazines is one of the most daunting aspects of owning a 5.56 AK.  There are endless AK-47 magazines.  Surplus AK-74 magazines are abundant.  But 5.56 AK mags are much less common.  These are smoky clear Circle 10s, which sell for about $50 each. 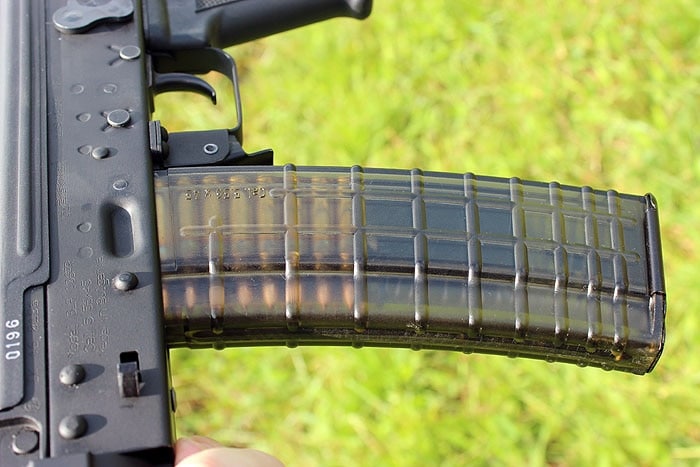 Other after-market parts are readily available.  I’ve installed an ambidextrous safety from Sniperhandle.com.  The forend rail is a Midwest Industries AK-SS Universal Handguard.  On top of that, I have an Aimpoint Micro H-1.  The whole combination is just part of what’s possible with customization.  Muzzle breaks, grips, rails, scope mounts… While there are not as many options for customization as there are for ARs, there are options.

As the SLR-106 line is built new in Bulgaria, and imported as sporterized rifles, they don’t have the nostalgic scars of surplus AKs.  That said, the polymer and black finish on the steel look good with modern upgrades like rails and handguards.  The SLR-106 line is ideal for those who want an AK with a more modern, tactical look.  But make sure after-market parts are made in the U.S.A. to avoid any confusion about 922r compliance.

The AR-15 catches a lot of flak for having limited range.  Part of that limitation can be attributed to short carbines with thin barrels.  And then there’s the vast amount of mediocre ammunition and optics that aren’t really designed to shoot at any distance. 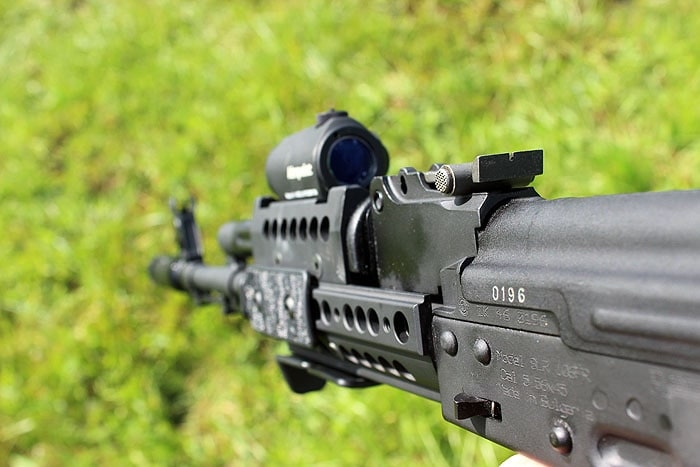 The 5.56 AKs have the same limitations.  At close range, the SLR-106 is devastating.  The low recoil allows for rapid shots and easy target acquisition.  Out to 100 yards, this AK is capable of really tight groups.  It shoots as well as any carbine length AR I’ve shot.

Yet it suffers from the same shortcomings.  As the barrel heats up, groups spread out a bit.  The trigger is not set up for target shooting.  The iron sights are fine for shooting out to 100 yards, but they are not surgical tools.  It is what it is.

The bolt has no hold open feature.  It won’t lock back when the gun is empty.  And magazine changes require a little practice.  Like other AKs, the magazine rocks in.  They don’t drop free like an AR magazine, but a magazine change can happen in one fluid motion.  The left hand holds a new magazine and sweeps the latch and empty magazine free from the gun.  As one mag falls free, the next is ready to go in.  The awkward part comes when the left hand has to reach around to the right side of the receiver to pull and release the charging handle.

There are a lot of modifications that can be made to address these problems (if you consider them to be problems).  The magazine wells can be modified to accept AR magazines.  Charging handles can be moved to the left side of the receiver to eliminate the need for the old reach-around. 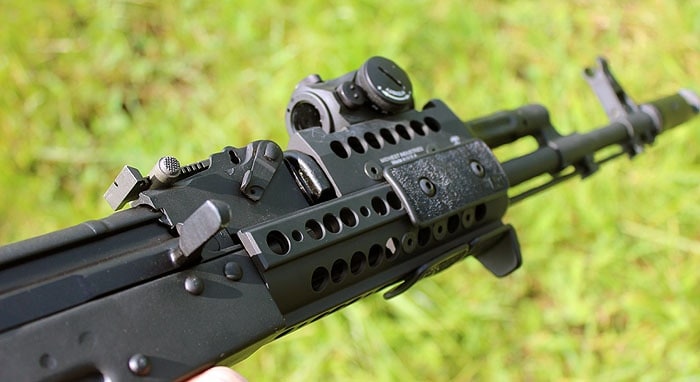 But I was supposed to be writing about shooting the gun.  It shoots flawlessly.  The iron sights are great.  The recoil is minimal.  The gun may not be as fast between magazines as an AR, but it is fast.  We had no failures to feed.  Extraction is lighting fast and reliable.  Like every other Arsenal AK I’ve ever handled, this SLR-106 does exactly what it is supposed to do, flawlessly, without fail, every time.

The SLR-106 was another option for those looking for a CQB tactical rifle.  There is very little chance that the .223 round would ever disappear.  For preppers, the SLR106 offers the indestructibility of the AK 47 with the assurance that there would be 5.56 easily available.  For the rest of us, the SLR-106 allows us to use much higher quality ammunition or varying bullet shapes and grain weights. 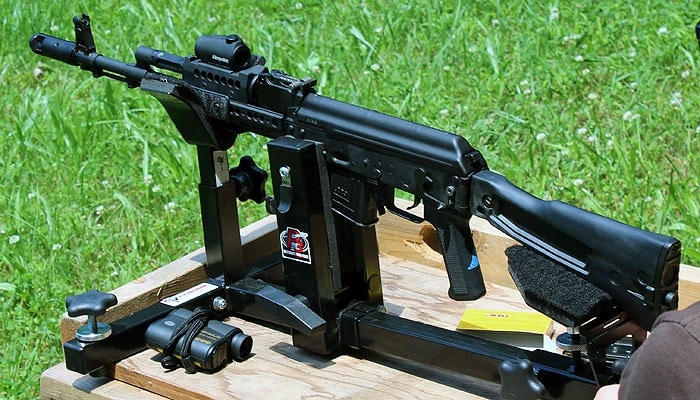 It is an odd time for those looking for tactical rifles, and AKs are no exception.  The buying frenzy is over, and the stores are once again filling up with black rifles.  The used market is flooded with ARs and AKs, and the prices are dropping because few seem to be buying.

The SLR-106s are available now.  You can pick them up new, as I did from RRC Firearms (where they are currently on sale for under $1,000), or used.  But this won’t last long.  The prices will go up and the supply line will run completely dry.  Magazines will be impossible to find.  Maybe someone else will step in and make a gun this good.  But we’ll have to wait and see.