There are many poorly made CZ 75 clones out on the market today. Many made by companies you will never hear about. But every once in a while you come across one that’s a bit obscure, but outstanding. One that is almost an improvement on the original pistol-design and today we look at one. The Sphinx 3000 in .40 S&W.

I’ve had the good fortune to try a lot of somewhat unusual guns. Some really expensive guns (well, by my standards, anyway). And some exquisitely made guns.

A couple years ago, as part of the BallisticsByTheInch.com tests of the .40 S&W cartridge, I got to try a Sphinx 3000. This was one of the early versions of this model, so didn’t have some of the same features that are now available.

In terms of being unusual, the Sphinx wasn’t that different from other guns I’ve shot. It is based on the CZ 75, after all, and most closely resembles the current “Tactical Sport” model. It has most of the features and design of the CZ 75: similar size and weight (though only a 4.5-inch barrel), double/single action trigger, generous trigger guard, location of the magazine release, etc. 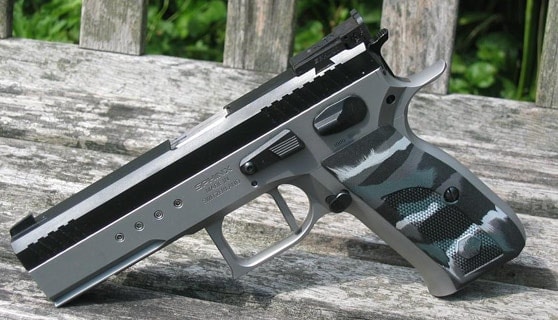 Expensive? Well, yeah, it cost more than I’ve ever spent for a handgun. The model I shot was mostly ‘stock’ and ran about $3,000 when it was new. You can easily spend that much on one today, too.

But where the Sphinx really stands out is in the quality of materials and level of craftsmanship. It is on a level of the very best guns made. As good or better than any custom gun I’ve shot. Approaching the level of quality you see in something like a Korth (though at about half the cost). Made in Switzerland, it really is very much like a fine Swiss watch.

This is the kind of quality that is not only visible—perfectly mated surfaces inside and out, gorgeous finish, premier materials—it is also evident in how the thing feels when you handle it and shoot it.

The trigger isn’t just smooth. It glides like it is mounted on ball bearings. The gun cycles almost gracefully. With the low bore-axis, it manages recoil better than any .40 S&W I have ever shot. It feels solid in the hand, points very naturally, and balances easily.

The two-dot sight of the one I shot was fully adjustable, easy to use, and contributed to the gun shooting accurately—even I could easily shoot four-inch groups at 25 yards while shooting free-hand. Someone with better shooting skills would not be disappointed or limited by the gun. 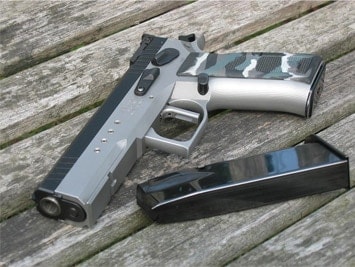 Materials are all of the best quality and the gun is generally considered to be built for 100,000 rounds, or more rounds than I’d ever put through a handgun. But that sort of quality and longevity seems to appeal more to people who are into competitive shooting or someone who can afford to have the kind of gun made for that level of performance.

This isn’t the kind of gun you’re likely to find at your local gun shop, whether it is a small business or part of a chain, but they are out there. The one I tried was imported by Rocky Mountain Arms. Currently Kriss is the importer for Sphinx guns.

Is it worth the money? Well, as noted, that’s more than I’ve ever spent on a handgun by a lot, actually. And a lot of times I think that guns in this price category are a bit—dare I say—pretentious.

Almost like the prestige of spending that kind of money is the justification for the gun, rather than the other way around. And guns like that I just can’t see myself owning, even were someone just to hand one over to me as a gift. Hell, I’d be afraid to shoot the thing.

But a Sphinx? You know, I can actually see owning one of those. And by owning it, I mean shooting it. Not just having it stuck away in my safe because I was intimidated by the value of the thing. I think that says something.